Gasgas history 1985 - the start - Salt , Girona, catalunia
read this text - the pictures are on the "where it all began page"

Back in late 1950's a man named Dani Maten owned a small workshop with a flat above on a very normal residential road in Salt, Girona.

Dani worked for the national electricity company during the week , however in his weekends evenings Dani's passion for motorcycles took over. Ive met Dani and he's a strong stocky man and the happiest guy you could ever meet. He's always got a big smile on his face and has huge hands , with fingers like sausages immediately telling me that he has worked hard with his hands for many years.

Dani was always working on motorcycles , riding and restoring them and the his knowledge and happy welcoming manner drew many friends. Amongst these friends were  Narcis Casas and Josep Piebernat  who both came there as children. Dani helped introduce them to motorcycles and riding. This friendship continued for many years.

Whilst in the middle of their successful motorcycle career both men decided to open their own shop selling the Bultaco's on which they were sponsored to ride.
In 1974 Dani rented out his workshop to Casas and Pierbernat and it was called "GasGas by the 2 entrepreneurs " which meant "give it more throttle"
Dani was happy with this and trusted these two men as he had known them since children.

Both men concentrated on their riding careers and the shop , selling and ,maintaining Bultacos. Narcis Casas and Josep Piebernat  were loyal to  Bultaco and this is all they sold from their new shop. Business was good as these two men were the top men in Spain in this field. Where else would you want to buy your bike?.

Then .......the catalyst happened.......in 1979 Bultaco started to suffer huge problems . The oil price increased, motor sales suffered. Competition from Japan hit sales. Last and the largest problem hit Bultaco , its workforce striked for 90 days and no models were released at the shows and no bikes were built and no spares were sent to dealers. It was the end.Worker buy outs  limped the company to 1983 , but it was dead in 1979. 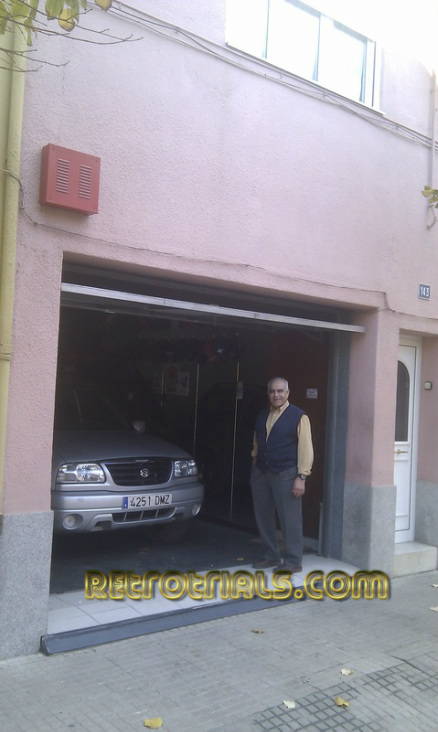 Here is Dani, standing outside of the original GasGas shop in Salt .The shop had an actual motorcycle hung on the wall outside with the old style "GasGas" sign outside the front
In 1979 Bultaco were dead.
The GasGas shop imported and sold SWM but in 1984 they also went bust. Piebernat and Casas tried to take over SWM, but it failed

The 2 men saw an opening in the market to produce and sell Trials motorcycles and realized they were well placed to take advantage of it.