Here are the pictures of the first GasGas shop tucked away in Salt. GasGas the shop
This location was the Casas and Piebernat Trials shop untill 1985 after which it became the location of all engine assembly
Going inside It was like stepping back 30 years ! . It hadnt been altered at all. The same guy owned it and instead of all the bikes being lined up , his car was parked in thier place. The inside wall on the right apparently had a model "dirt track" mounted on it !

The bottom picture on this page shows the location of the 2nd unit Gas Gas rented to fabricate and assemble the first Halley models. 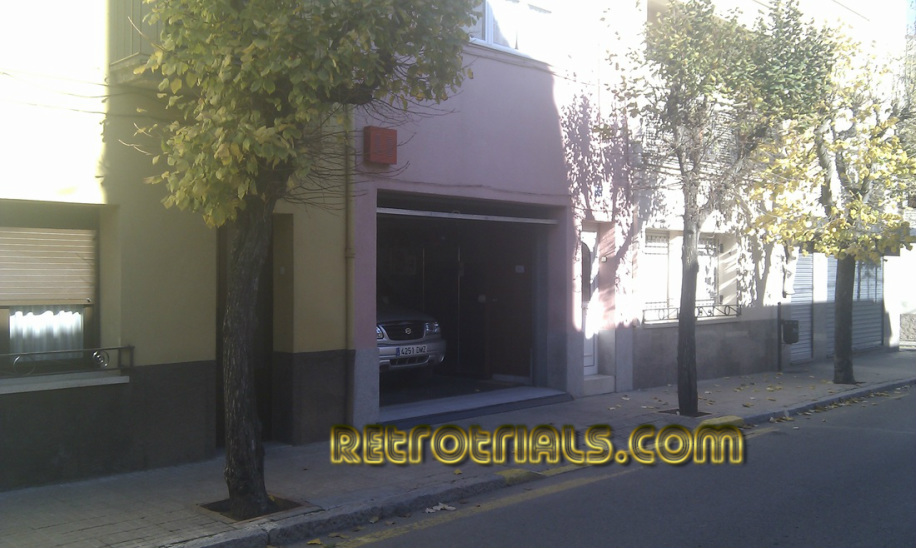 Where GasGas began
GasGas Ex parts manager Gustavo Putz to the left stabding next to Dani Font. Dan is the owner of these premises but was so much more. He taught GasGas founders Narcis Casas and Josep Pibernat how to ride. He later rented these Enduro Champions his premises where they started in 1973 the "GasGas shop". 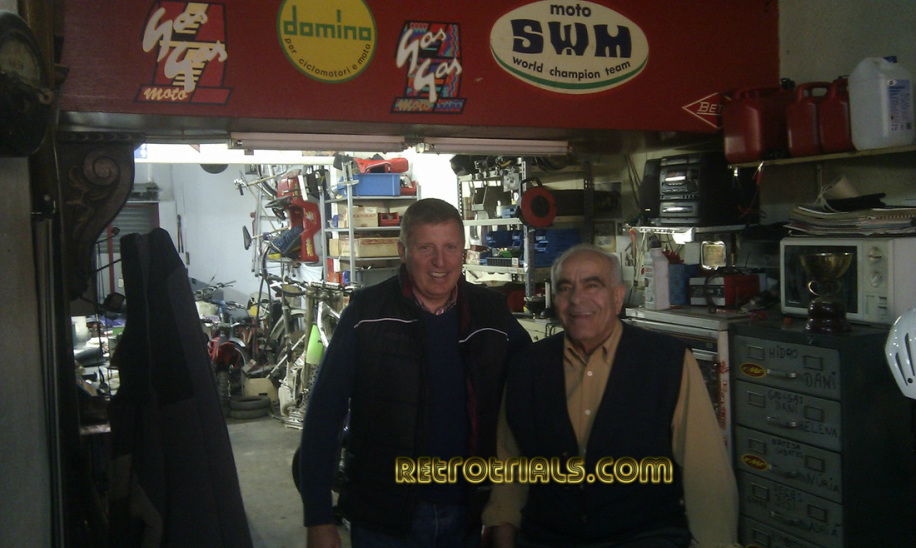 Dani (on the right) assembled all of the early GasGas engines. He is standing with friend and former GasGas parts manager Gustavo Putz who know runs the excellent Trials shop WWW.GP RECAMBIOS.COM
From the doorway looking in 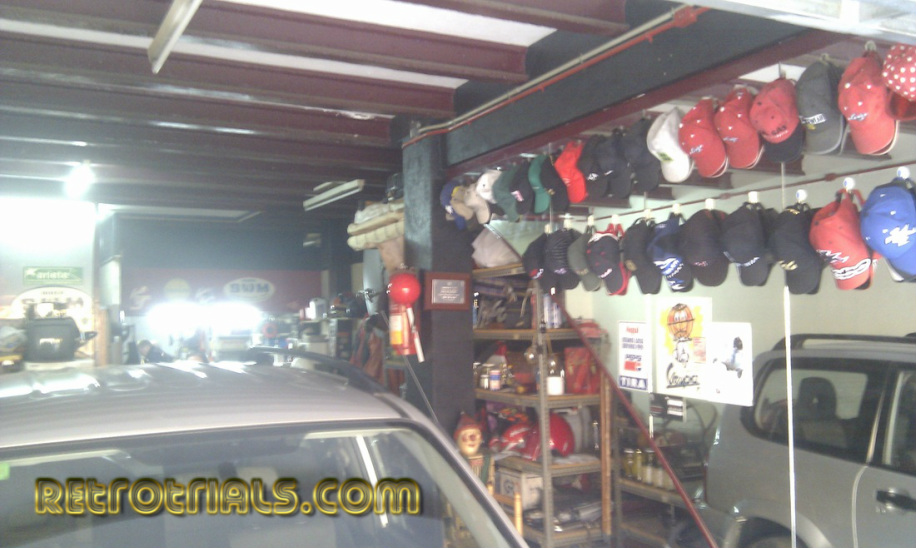 Inside
This photo shows Josep Pibernat on the right and Narcis Casas on the left welcoming SWM Boss  Pietro Sironi to thier "GasGas" shop. These windows were at the opposite end to the above photo .  The GasGas shop were the Spanish SWM Improters as well as being Bultaco dealers. 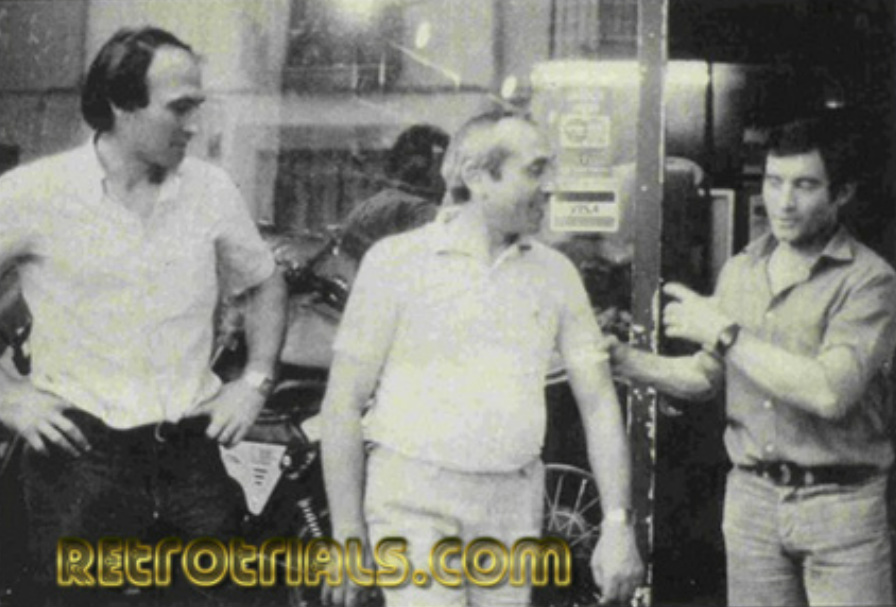 Here you can see the same doors in the distance. The GasGas shop hasnt changed at all. Dani Font was quite happy with it as it is. 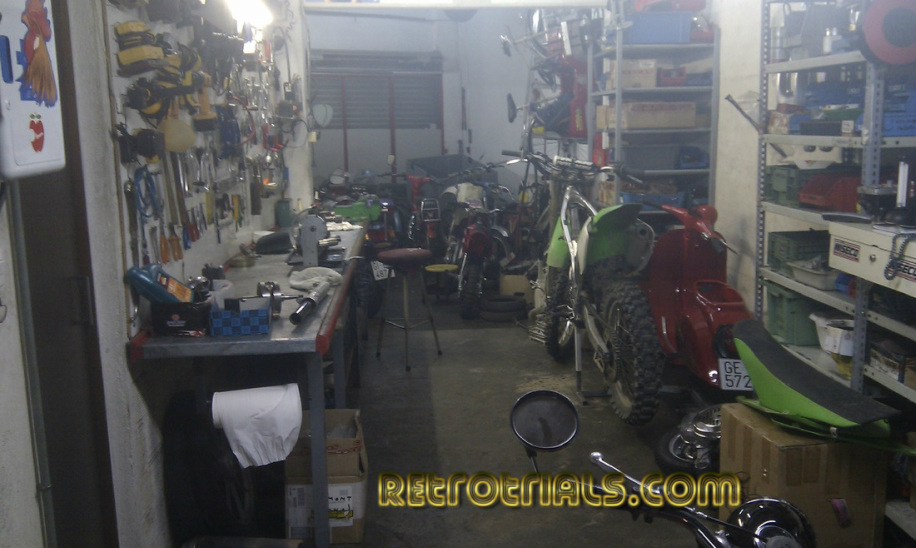 Looking towards the front customer doors of the shop.
Im told that the Gasgas label on the old motorcycle was a bit of a laugh at the shop. 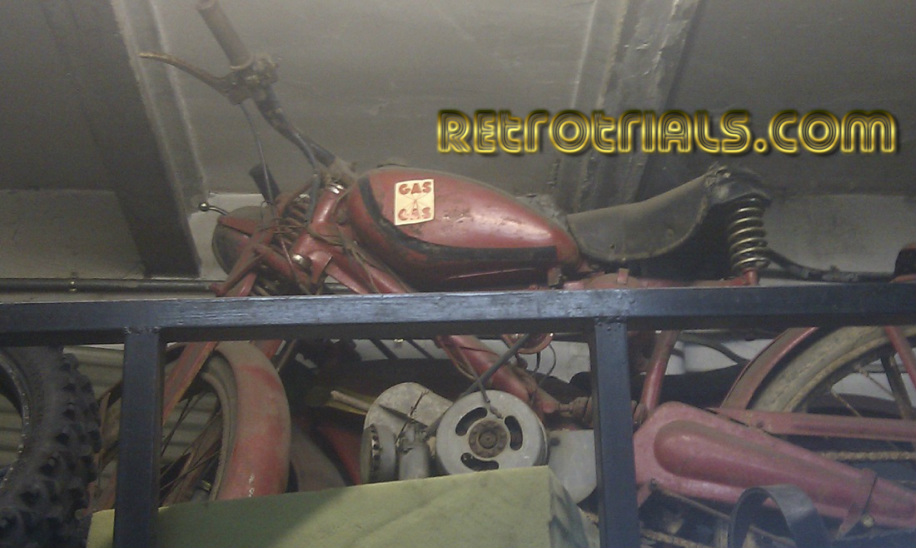 I guessing that this was a joke from way way back !
Petrol compressor with external exhaust venting 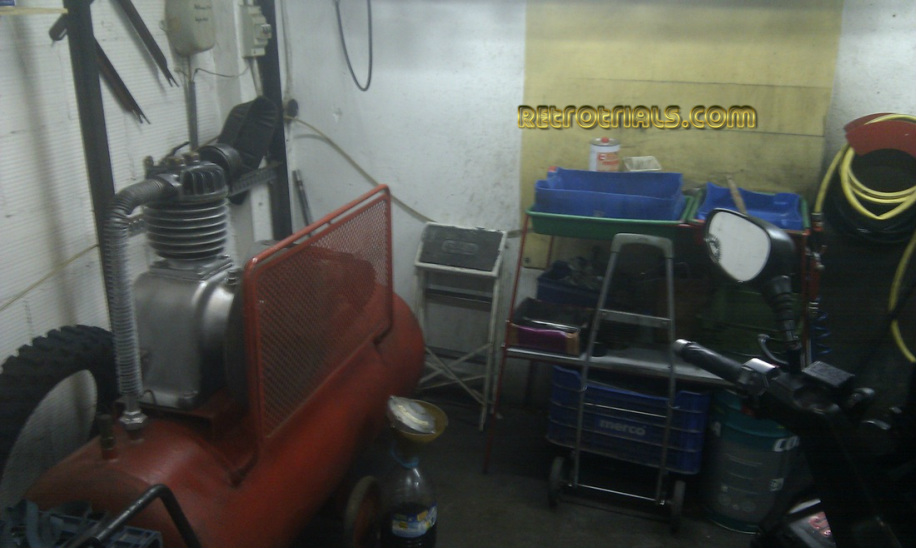 Here is one of the original Gasgas engine mounts. If you have a Gasgas Halley  , it is probable that your own bike's engine was assembled on this swiveling stand. I remember Dani clicking the levers back and swinging the mount around on its axis as quick as lightening as if it was his arm . 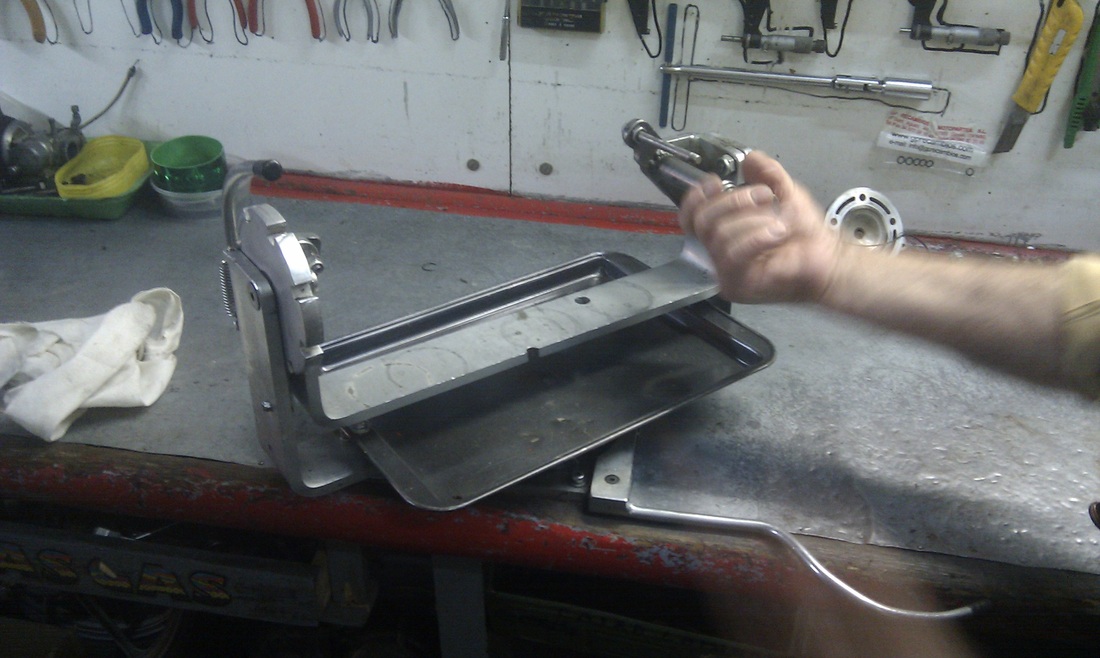 The work bench engine mount with Dani, levering and swiveling it as if it was another limb !
Some original items still hanging up , including a great original Gasgas jacket 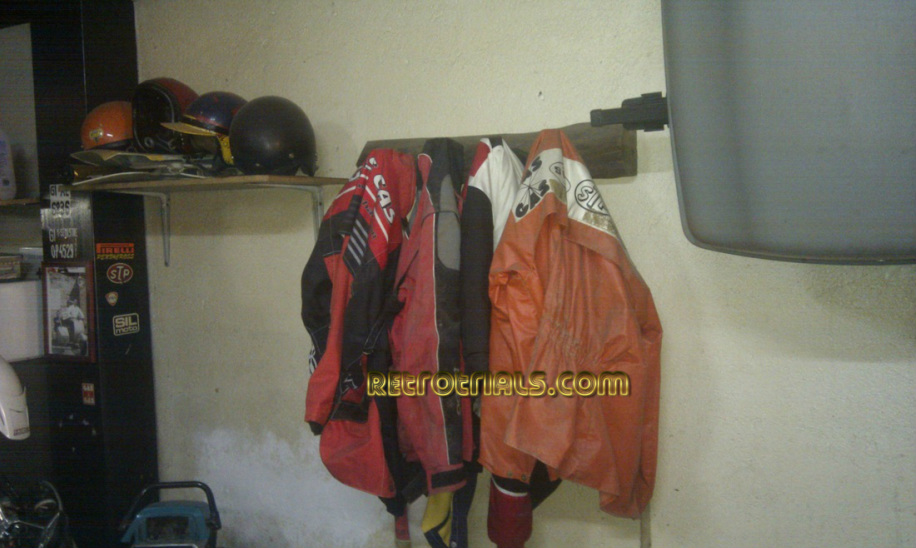 Nice retro jacket
A view from further back 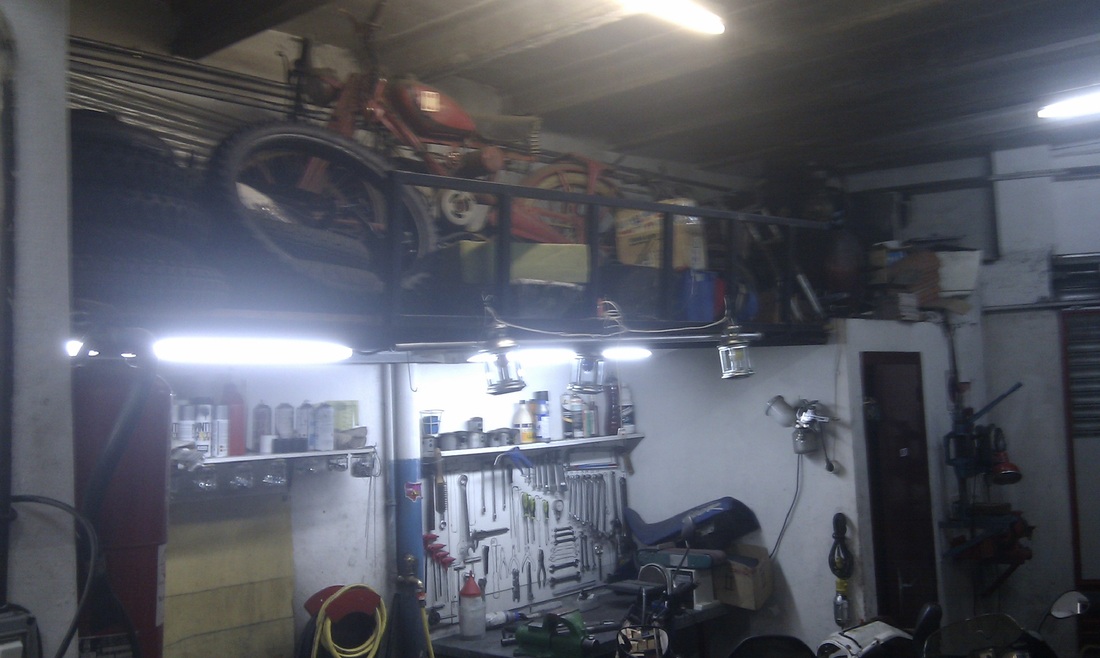 The wonderful guy that is Dani Font. When i visited him in October 2011 he was all all all smiles !!!. He loved talking of the old times and the small attention he was getting from his vistors. It was great to meet him  and since i have heard so many nice things about him . Sadly Dani died shortly after my visit ...in fact on New years day. 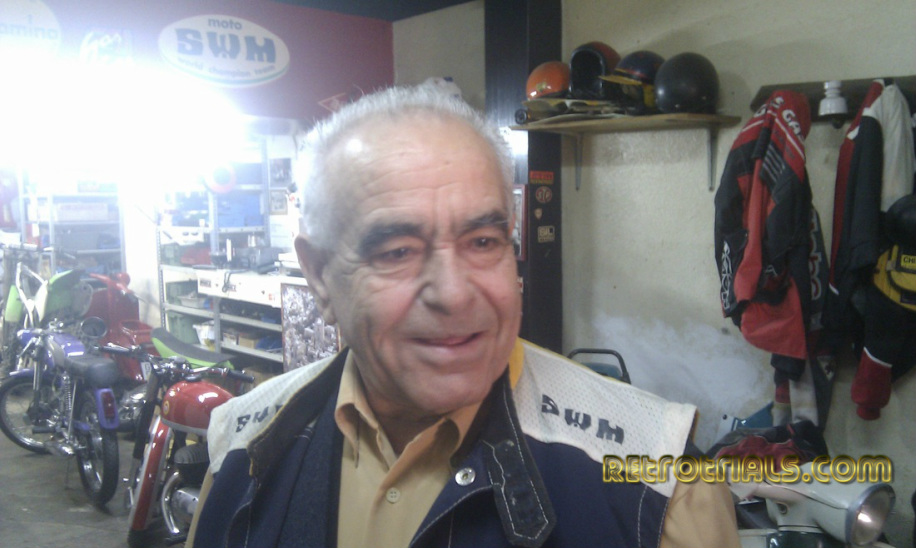 Dani modelling that special GasGas jacket
Whilst the above photos show the exact location of the Gasgas shop , production quickly outgrew these premises and fabrication was done in a very small workshop exactly at this site. Its now been demolished and these flats have been built on the site. 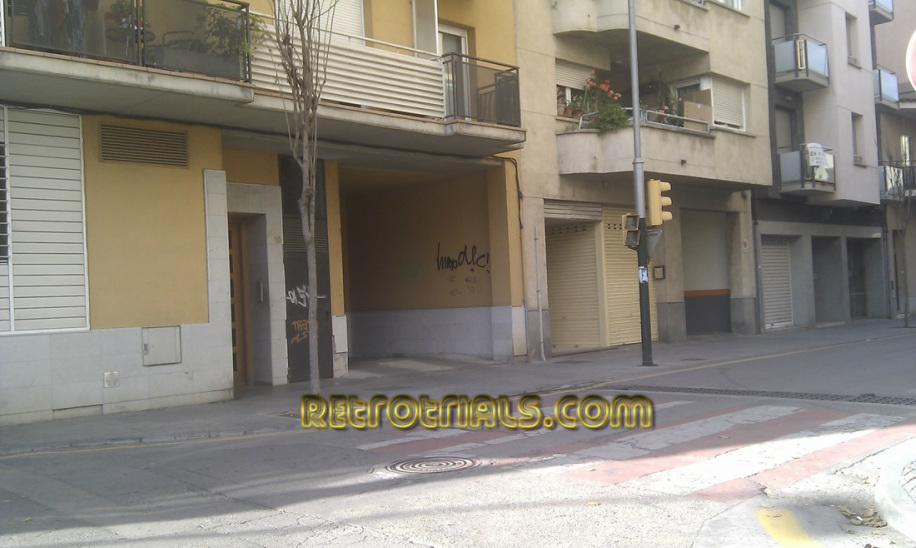 The new build carport dead ahead is exactly on the site of the fabrication set up of the very early GasGas models.
GasGas Fornells factory tour
Interview with GasGas founder Josep Pibernat
GasGas links