works bikes - where are they these days ?

Prototypes would generally be the first attempt by the manufacturer at production. They would sometimes feature engines , frames , gearboxes and styling that was wildly optimistic . Time and small improvements on a hourly / daily basis would all eventually add up to a bike that was possible suitable to be ridden and sold.

More often than not these prototypes would be the only thing that the factories would ever make !. Now that will be a surprise to you. By the time the Retro era of 1980's trials  motorcycle had arrived companies had already realised that it was impossible to build a motorcycle for a price , if they made everything themselves. Very simple and small things were made if the company was absolutely pushed into a corner, but generally nothing was made by these companies , OTHER THAN THE PROTOTYPES.

This lack of manufacturing was not because of a lack of skill , it was simply down to survival. If they made petrol tanks and frames and engine casings they would need a factory 10 times the size , with hundreds of highly paid skilled staff . Contrary to this , back in the day  most manufacturers would employ skilled engineers and fabricators to be involved in the design of the prototypes. Once the prototype had been built (often from materials far substandard to the production bike) the only really skilled men that were required
Back in their days works bikes had attention lavished on them. These machines would usually feature the "special parts" that may find their way onto the production bikes the following year. Sometimes they tried ideas that didnt work
Follow this link for more photos

the secret unseen watercooled prototypes of  ​​Merlin and Mecatecno

The 1992 factory aprilia of tommi ahvala

The factory 1989 aprilia of diego bosis

The factory beta's of jordi tarres

The factory beta's of jordi tarres 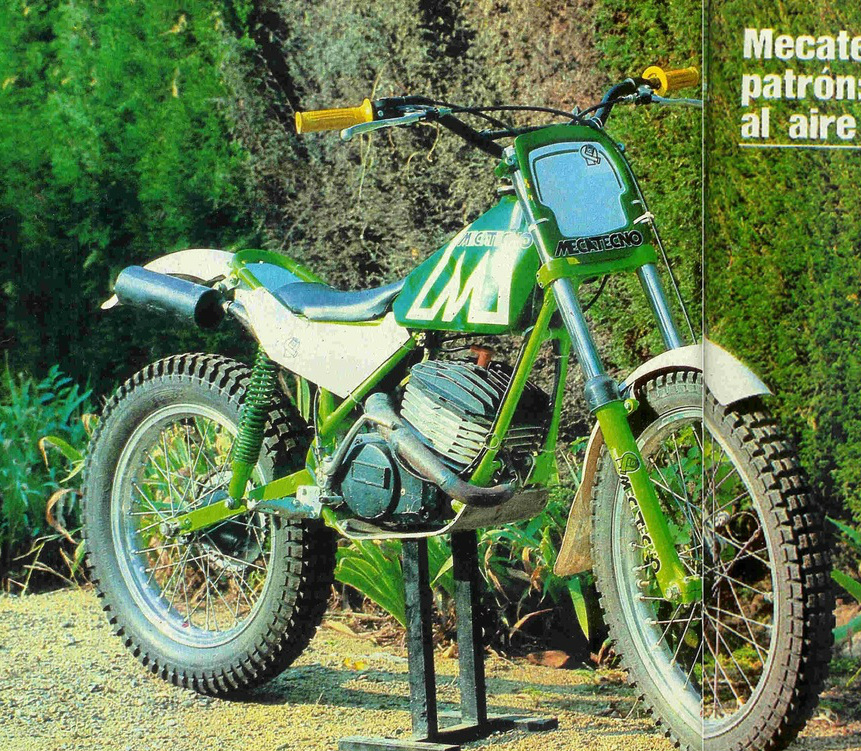 The one off prototype 200cc Mecatecno built and then ridden by Marcelino Corchs in 1980.

Here is a rare picture of the Mecatecno MR326. This bike was ridden by Salvador Garcia  who was the long term minder for Jordi Tarres.He rode for Mecatecno for a short time. Salvador was a good rider back in his day. This prototype was a one off and featured a fibre glass petrol tank and side panels made at the Xops factory.The mudguards were also made at the factory using a vacuum bag process they perfected . Their equipment as only suitable for very small runs. This prototype sucked air into the engine via vents at the front of the tank which you can see. . The air was channeled down the frame to the carberattor. This was not successful as there was insufficient air capacity to run the engine well. The gear lever arrangement was also very strange , as the gear lever operation was opposite to normal.
You might also be interested to know that the first Mecatecno prototype engines featured a high and low range gearbox with an external lever to activate. This grew to be far to complex and a more traditional operation was employed.
The engine casing you look at was also changed a number of times prior to production. Many many of the engine parts and the chassis / swinging arm were hand made at the factory. This truly was a hand made bike where most of the components were hand made for this one off. Once the factory were satisfied with everything about the bike production could start. This is where the components would be contracted out to individual specialist companies to fabricate.
I have been to many different bike manufacturers and these days this the process of building a prototype at the factory or contracted workshop is the norm. After this , when production is started the factory becomes simply an assembly plant.
GasGas and Sherco are examples of this. Josep Paxau fully develops the bike. Once it is ready the factory simply style the bike and contract out the parts build. 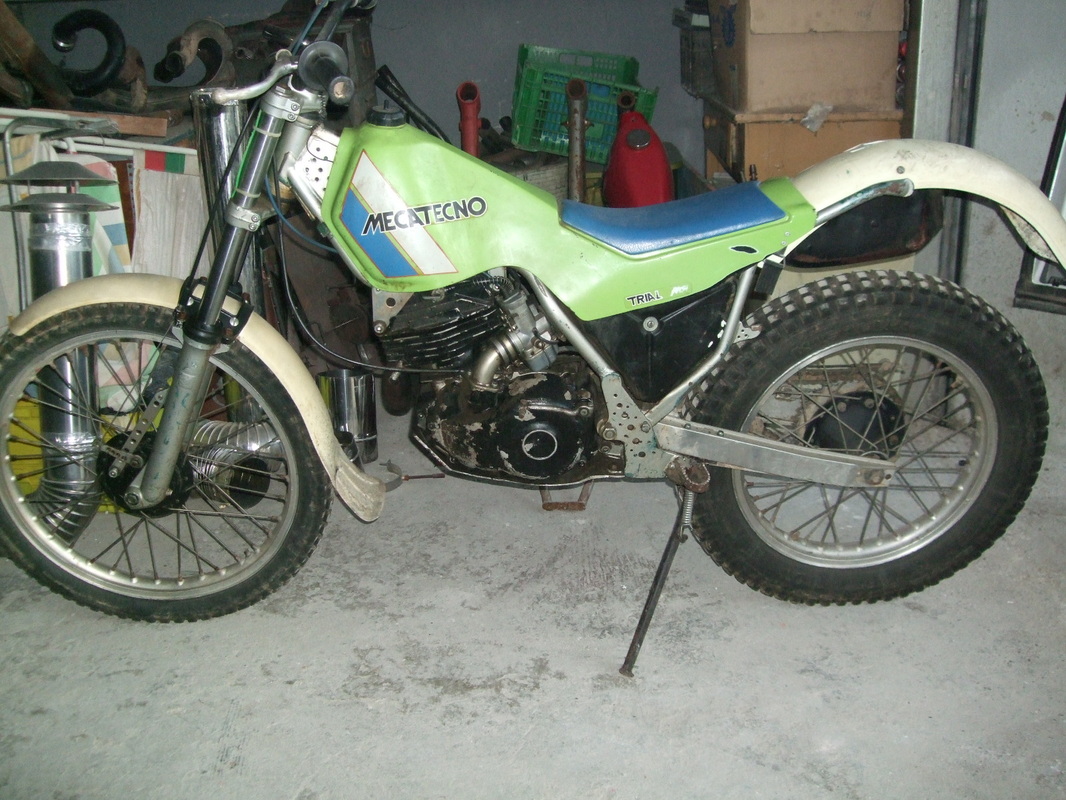 This bike featured in the later years special spoked wheels where as the production model had six spoked wheels. The tank unit is a slightly different shape. The top yoke featured centrally mounted handlebars. The standard production bike had handlebars that could be mounted far forwards and reversed to be far back . They could not however be fitted directly above the forks as this picture shows. 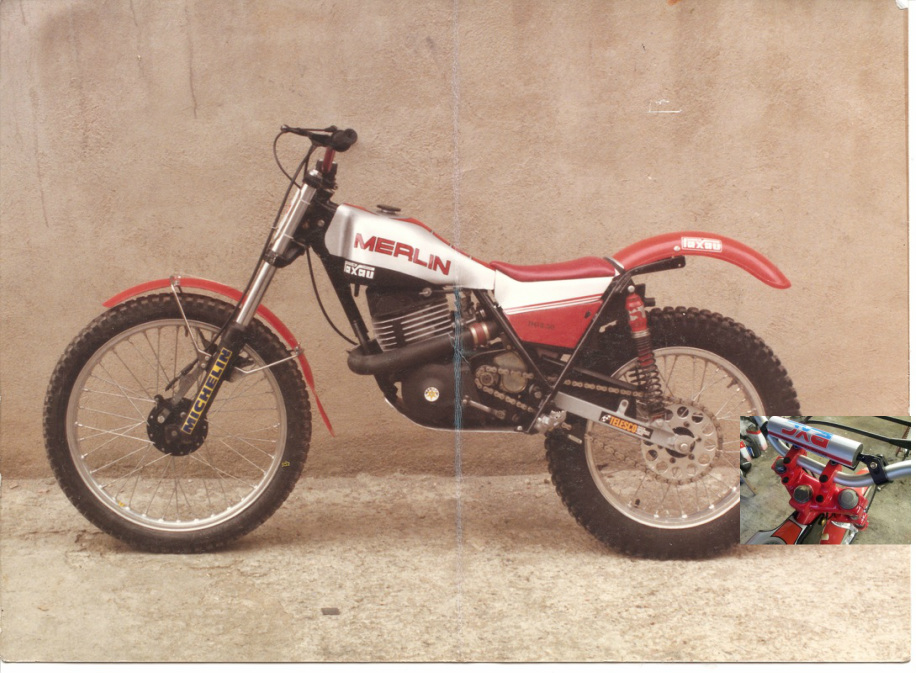 This was a prototype that developed into the works bike for Gallach.The tank is a special fiberglass unit where as the production model is platic. The fuel filler hole is off set. The rear mudguard is special . There is no rear silencer whereas all production models were fitted with them.There were many engine changes and modifications. Initial gearboxes were fitted with bronze gear selector forks. These were later changed to alloy. 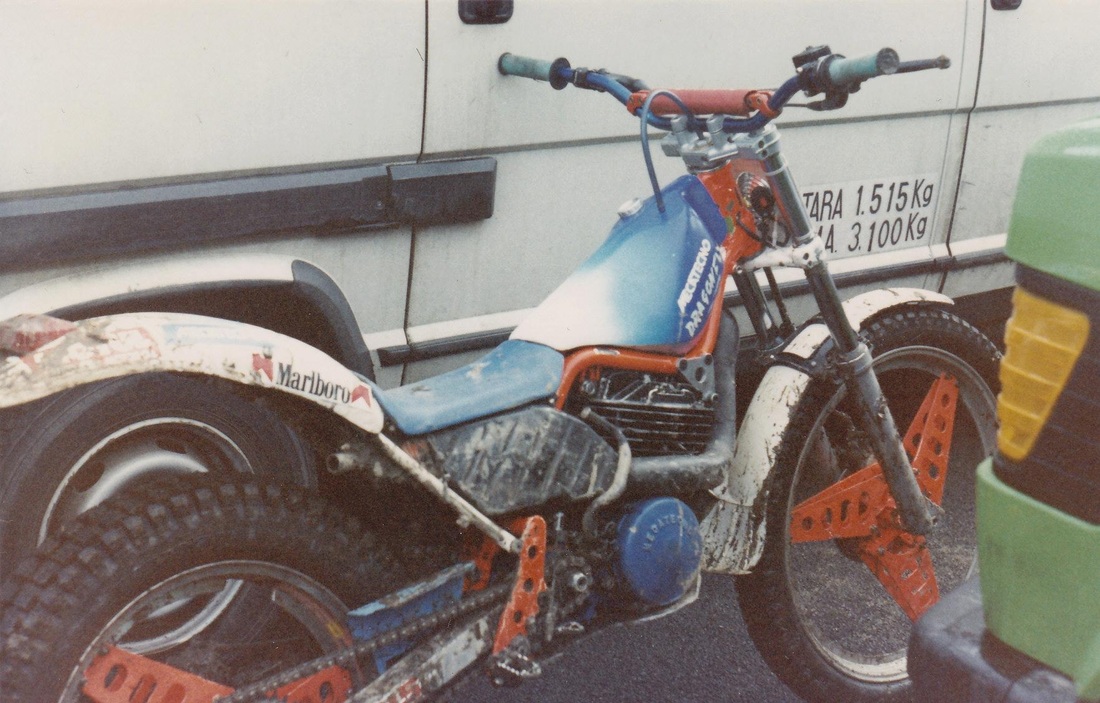 The 1987 Works Mecatecno of Lluis Gallach 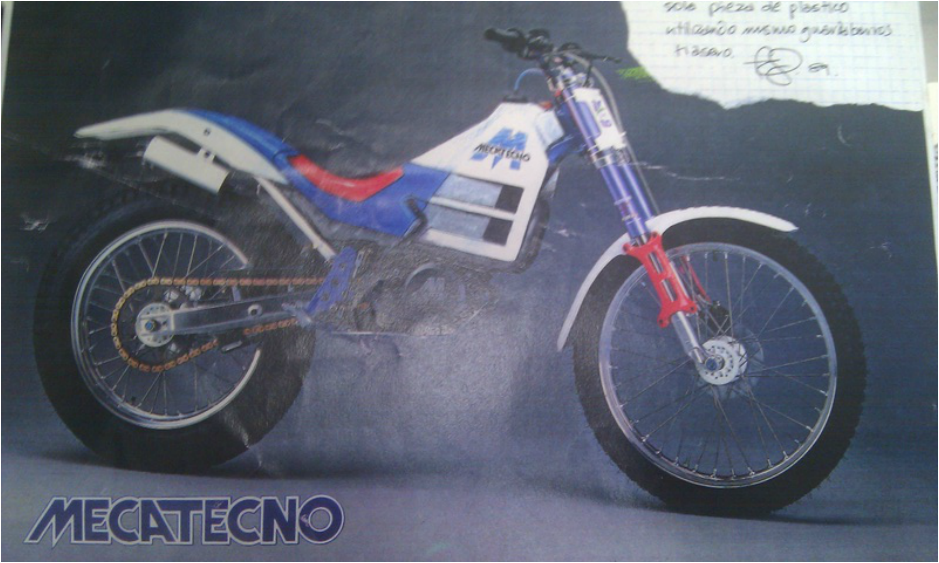 EDDY LEJEUNE ran 2 factory merlin bikes in 1988
the first one is now in the uk , whilst the 2nd is owned by ignacio bulto  , the manager of merlin

The bike in the inset small photo below is the actual bike that Tarres tested with GasGas. It features works lower fork yokes that have never featured on any production GasGas. It also features a modified engine over standard. This GasGas is currently for sale at Jan 2013 for 2500 euro.

This was Beta motorcycles first watercooled Trials bike. This is the exact moment the first watercooled prototype Beta (and Jordi's favourite bike) was unveiled to the public as the 1990 Scottish six days trial. Thank you to Jason Finn for this excellent photo.