If you have ever removed the plastics from one of these white 250 Delta models , you can see why . The airbox is fibreglass with metal fixings integrated into it. Brackets are here and there , mounted from the frame to route pipes and hold brake fluid and coolant containers. The plastic petrol tank has inbuilt metal components. Nothing was easy with this model ...it was a fight from day one ....and it was Lluis and Andreu who were doing the work to sort it out. Don't mistake the 250 white Delta as being a normal production bike . Its not. This is a true low numbers factory bike , built at high cost ,in the name of development.It cannot have earnt the company one peseta .
The sad part was , that at the end of 1990  and with just one year under his belt with GasGas the young and upcoming rider Amos Bilbao from Austuris was hired by the factory , and Lluis' services were no longer needed.

This photo of Amos was taken at the very moment the announcement of his move from Fantic to GasGas was made. The 2nd photo shows  Felip's old shop where the Alfer prototypes were made and Lluis's bike was serviced. It is now a house.
In Retrotrials exclusive career interview with Lluis he said the following

"Because Amos Bilboa arrive in GasGas. He is very good and upcoming and it is not possible for Gasgas to have 2 riders and GasGas tell me it is not possible to continue contract the next year, so I go to Alfer. Alfer approached me and I remember coming to an agreement with Francisco Almirall and with Motos Phillipe. Near my home there is a shop. They prepared the bike for Alfer. This place is near Vic. Albert Juvcanty work in this bike shop on my Alfer. I ride for the factory but the factory make the new bikes only. I ride with the factory for 2 years .... 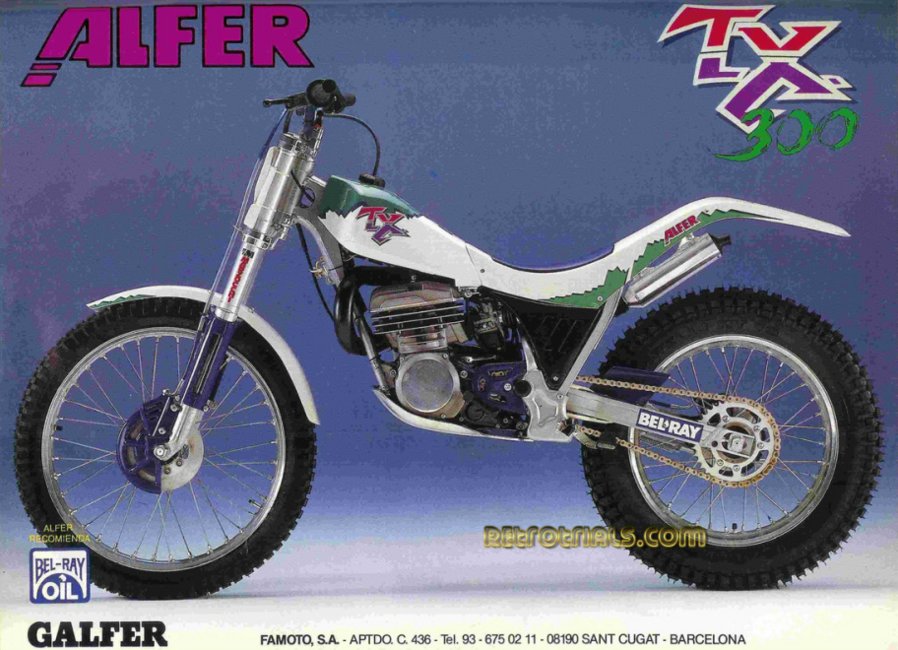 Rediscovered - The factory Alfer of Lluis Gallach
Did you read that last line from Lluis ?   "After I leave Alfer I do not know what happened to my bike"
What a line up ! , with Gallach 2nd from the left on the Alfer TX300. Can you name them all ? Why wasn't Jordi riding ?.
Well......with my usual sense of caution the Retrotrials team was invited to see the "real Gallach Alfer" TX 300 bike from a man who said he was part of the team that created and designed the Alfer and Scorpa bikes along with Francisco Almirall. So we telephoned Felip Gonzalez up and it all sounded very genuine and true. He had photos and documents to back this up , because of course i was a little cautious to believe such a claim. But the claim of Felip was sounding very convincing , so i hopped on a plane and went off to Barcelona eager to see the bike. Why the rush ?. Well i had heard that the bike was being sold and perhaps the bike might disappear or the new owner might not want this report to appear. So like a flash of lightening i jumped onto Sleazy jet and i was there with my Retrotrials chums for another adventure.
These photos are from a test carried out by Moto Verde magazine . This is a stock bike for the test and not the factory bike of Gallach. There are some subtle visible differences .
Page 2