It all started 2 months ago when I started planning my trip to Catalan in March 2015. High on my priorities, as always, was gathering information from past and present major figures in Trial. Both riders and business leaders. There was going to be no time on the beach for me..... There was no time for that. In any case I burn easy :).

Retrotrials.com is proud to sponsor Pol Tarres. The Tarres family have helped me so much in gathering material for this Web.
They're friendship and assistance is humbling. Helping Pol just seemed the right thing to do. So, one of my plans was a visit to see Pol and Fransesc to deliver my side of the deal. So. .. that's what I did..... But there had been some unsettling news which cast a cloud or worry at Fransesc and Pols house. About 2 months ago when training in Rellinars with Tony Bou, Pol had damaged his right knee ligament. The specific ligament controls sideways movement.

Pol had taken a dab at an extreme angle and this had torn a ligament, but as is quite common with this type of injury there was little pain a few hours later and Pols confidence to ride was as strong as ever. This is how it continued..... But on March 29th whilst at the Spanish Trials round in Mallorca, Pol tore the ligament and ended up in Barcelona hospital. Pol was receiving the best treatment from specialist sports doctors and on Tuesday the 31st March he was released. So when I sat at Fransescs eating a wonderful fish lunch prepared by his wife Angel there was worry in the air and I could see it on everyone's face.
Enjoying lunch with Fransesc Tarres . Pol's knee injury doesnt seem to bother him.
The worry did not however stretch to Pol himself. At 9pm he strolled in from the hospital as confident as ever with his minder carrying a single crutch as Pol didn't need to use it.

I asked Pol if he was worried about his injury he replied "No".

Whilst eating lunch, Fransesc asked me if I'd been to see Jordi yet. I replied that I’d come to him first. He then said that we'd walk down to Jordi’s after lunch. So you can imagine me. I wolfed my lunch down and skipped desert knowing what just might be there ;).

So off we set on the short walk to Jordi’s house. I had previously, in December seen the TRS engine in the flesh but this time I hoped to see a little more. As we walked down Jordi’s driveway I heard the immediately recognizable sounds of a tig welder on ac setting to work. Buzzzzzz. Buzzzzzzz. Fransesc knocked on the huge garage door where I know Jordi does his more involved and secret development work. I've previously seen this neat and tidy workshop a number of times but any chassis' would be covered in a sheet or a coat, or I was quickly summoned away. The electric garage door lifted and Jordi was standing there with a welding helmet on his head smiling from ear to ear.
To the right of this photo are some trees on a golf course like lawn. There's also a steep bank , ideal for having a short test on a bike.

Exclusive - Trs prototype test ride www.retrotrials.com
Jordi shook my hand firmly and invited me in to his secret workshop, but this was on the understanding that I couldn't take photos of parts / or give a great deal of information in this report . If you study the photos and read carefully you can discover a lot.This was only because they want the bike to be completely ready before the details, photos and specifics come out. Laid out on tables were countless parts for the new bike, many many specially fabricated and stamped for the TRS. Jordi was welding alloy components to complete prototype components from stamped parts received. 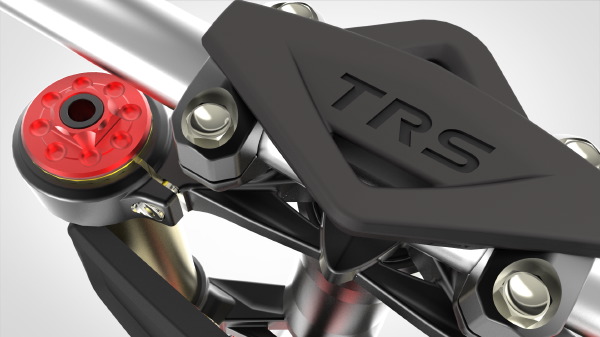 Exclusive - Trs prototype test ride www.retrotrials.com
Jordi is such a modest guy. It’s clear that his huge success has shaped his future..... But you won't hear or see Jordi saying how great he is. Not one little bit. This modesty is a great quality. So let ME tell you. Jordi is the modern Paxau. He has been heavily modifying motorcycles since the 1980's. 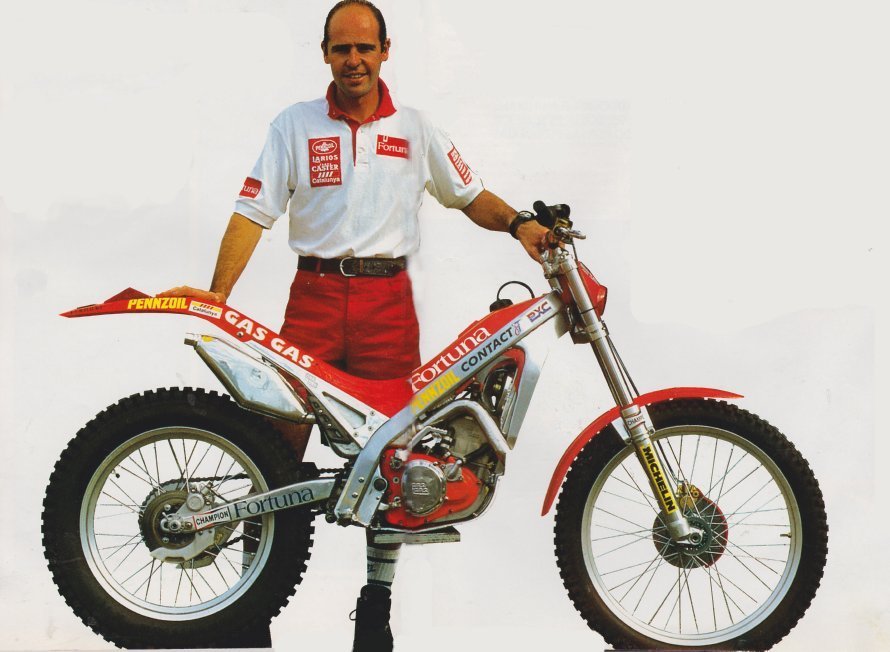 Exclusive - Trs prototype test ride www.retrotrials.com
It was not just the factory that carried out the bike work, it was Jordi as well. One look in the neatly organized basement store rooms reveals hundreds of modified parts. Silencers and head stocks from Beta, chassis and swinging arms from GasGas, all slightly modified on different ways.
Down in Jordi's basement as well as his garages there as room and room of spares. He could bring the price of alloy down Worldwide , if this lot was sold  :)
Some of this work was carried out by Paxau in his Torello workshop where Josep has been with his team for 40 years , however

Exclusive - Trs prototype test ride www.retrotrials.com
much of this work throughout his career involved Jordi working alone into the night welding, cutting, filing, drilling and making 100% percent sure that something was right. Jordi wanted to win so bad. Although he had a terrific team around him, it was Jordi who had the greatest interest in getting things right. It makes sense.

From paper designs, then 3D digital drawings, parts are produced ...... but it’s here that the work starts getting these parts right and tuning the whole package.
The TRS computer design team consists of the three Jordi's . Jordi Tarres , Jordi Mila and Jordi Vinyoles Font  sitting down.
After an introduction to the hundreds of parts laid out, Jordi said 'Do you want to see the prototype? '. 'Yes please :)' I replied and off we trotted. As we walked the image of a bike appeared sitting on a rubber topped bike stand on a hydraulic lift. Now, .....I had heard that this prototype had been in development since late last year, so what I was seeing was a much later and much more refined bike and sure this bike looked great. The TRS prototype is a real stunner. It looks simply gorgeous. Jordi’s eyes were alight with passion and enthusiasm. He talked through with me almost every component and some are ground breaking with technology not seen before on a trials bike. It's not crazy radical. Its basis is tried and tested technology with the emphasis on significant improvement, performance and reliability. Jordi says he has used the JTG experience and built on it. The TRS had been and will continue to be tested relentlessly to ensure it’s just perfect. Right now the chassis and running gear are 99% complete. The tests will continue and continue.