You are famous with the one piece suit.  Why did you ride with this.?

I begin this. I think it is the best. I like ski and I ask to have something like ski and before it is 2 pieces and I have a problem with my back and I say I prefer one complete. They say, yes but it is impossible to sell, it is too expensive. I say, this is no problem for me you don’t sell ha ha ha, so they make but they say this is expensive and now many people hey. It is much more beautiful. It is good and comfortable 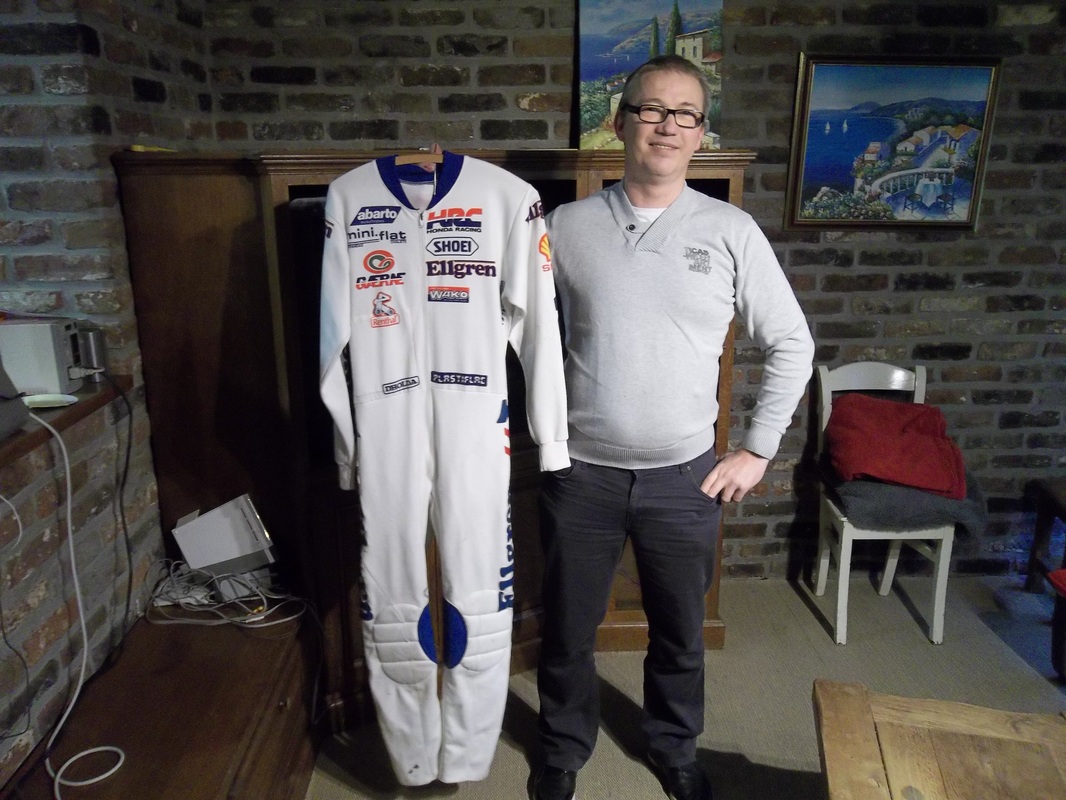 Yes, it was the colour.


How many you have?

I have one or two max helmet, they no pay the last year also . Before everyone and after shoei , but shoei not yellow I think.

Did you help to develop the shoei helmet ?

No I go to them for the money

Your boots as well, did you ride with one or two sets of boots each year ?

No I ride with many boots. I don’t like to ride with the new boots and they say ok we want you to drive with the new boots and I say ok you make these boots special for me, very soft which they make. But there is problem after 3 race they break and I change a lot and before I get the special boots I give the boots to my brother and he wear them 5 or 10 time and after when the boot is soft I have.

They try to make light boots and they make these for 1 or 2 years and after they say it is much expensive and they not last long. I then started to ride with normal boots. They were ever expensive but this was not for me to think about.
Eddy Lejeune and his daughter with the watercooled Montesa
Did you ever think about making your own trials bike?

Do you ever visit the world trials to watch?

Sometimes I look on the internet and I go to indoors 1 or 2. The last in Italy I go to by plane. Journalist ask me to go and I go to make picture with many World Champion and I go for this reason and I see Bou, incredible Bou. I don’t go anymore

Do you read about whose winning

No, I look sometime on internet but I don’t know. Is it starting now?

Yes, very soon, the indoor has started. It is always Bou

Do you have any views on noise and land pollution, no stop and low bike sales? What do you think of the problems that Trials is facing?

The problem is the trial. The problem is the trial Nobody can make the same. In motocross, formula one, in many sport if you want you can go slowly but in trial when you have lost you go, you are finished. The 4 or 5 best drivers in trial can try and the rest……It’s too much difference. If you want to make competition you must jump and do crazy jumps and things like this. One person can make this? And the problem is this, in trials the best go no problem and other people go and make a big crash. It’s the reason also I stopped. In the beginning I was World Champion, trial for me was no problem but when you crash it is no good. It is a difficult sport, trial. It’s a difficult sport to make video of also. The best driver can go and they go fast and then stop. They go, they stop, it is difficult. It’s difficult to make one regimentation. One foot is one foot, one crash is five, if you stop, what is it, one point 2 point 5 point

I think the solution is that one foot is one foot, you stop a little one foot more, you arrive 3,  3 point, 4 foot 5. When you have decision make, 1 he stop there, 1 he stop there, 2, 3 maybe 4, 5 . But if they stop and get 5, it’s not a good decision hey this is impossible everybody. Everybody can receive a 5. You could put a light to see if they stop, but it is impossible. There will be problems this year. If they stop, give one but not 5.

What is your favourite movie?
Rocky Bilboa. When you take flight, many time you see Rocky on the plane and I see Rocky, after I see, I wanted to make my condition and improve this. It’s a film I look and when I look I want to make myself better. Another film I like is Pretty Woman.

Have you had any bad injuries in trials?

Yes some, my right thumb, my leg , but not during the World Championship. During the Championship it was only the finger. One time in Japan I broke a scaphoid, but I finish the trial and win. I win the race and the day after I must make practise with Saunders and I leave and I say I cannot make nothing. They say, but you finished yesterday what is the problem! Today you cannot drive? They say ok and they take me to the hospital of Honda. They have their own hospital and they look and they say it is broken how this happen. I say yesterday before the last lap I make a crash and do this. They say ok, you win and we no make you work today.