What do you do with your time now?

Nothing really. I work a little here, I can show you if you want. Eddy then shows me a short video clip of a business venture he is running connected with the plastics industry. I begin this work in 1990 when I sell Plastiflac, I make also. Eddy tells me that the machinery is here in his house and he buy many plastic parts from Plastiflac  and then he sell them. You now before I was one of the men running Plastiflac. I sell the part. He shows me a video of the 2nd machine when he is completing products for the pharmaceutical industry.
Do you think one day you will go back to the trial and ride the classic ?

You have been very good at the trial, tell me something you are not very good at, or perhaps your wife should answer ha ha

Are you proud looking back on what you did?

Are you proud of your achievements?

Did you think I am Eddy Lejeune I have 3 World Championship and I am happy for this ?

He laughs out loud saying no many times. I won’t understand why I was World Champion.

Because you were the best on the world

But when you look back are proud of that time?

Authors note - Personally, I don't think this is correct and that it is tainted by underlying psychological problems. I think Eddy is melancholy and suffers from depression. I think this is what is left from his bad accident, the circumstances of which were horrific. He is still trying to recover and the medication helps him. Externally Eddy looks and sounds perfect, but his self esteem is low and he has a low opinion of himself. However, when I look below the surface I can see that Eddy is in fact proud. Eddy is very proud of his family. He is also proud of his success, but it was a long long time ago. He has kept his trophies and kept a good memory of those days. He likes to ride BUT its all hampered by the psychological problems that he faces and that I've described above.
As a result, I don't accept that he's not proud and neither do his family.

Eddy is an astonishingly honest person. He doesn't pretend to be someone he's not. He tells and speaks all. Eddy's bad motorcycle crash in 1998 in Eddy's own admission has had a huge effect on him, but make no mistake there are no apparent clues. If I hadn't known from reading about this crash and hearing about the effect on Eddy I wouldn't have guessed it at all, after spending time with him.

For Eddy , its all about family now. His priorities have changed from proving himself on a bike to spending his time with and looking after his wife , children and new born grand daughter Sashsa , the daughter is Eddy's daughter in the picture below. His father and mother in law live in the annexe behind the house. The Lejeune's live all along this street. this is one very close knit family. Family is top on Eddy's priority in life.
Eddy then says “look here is the baby of my daughter” They live not at this house, but the house after. Eddy shows me from his rear windows the huge variety of man made and natural sections that he has on the land behind his house. Huge Concrete pipes, rock piles, a short steep gully with a huge rocked bottom looking like a tough Scottish section. My brother and my son make these section, I make them and after the trial I ride the horse with my daughter for 10 year. We practise but I am very bad. I begin with my daughter, all family, yes, I am good for the family

Eddy shows me pictures of his son and explains that his son was very interested in the cyclo trial. His son is 22 and his daughter is 28. 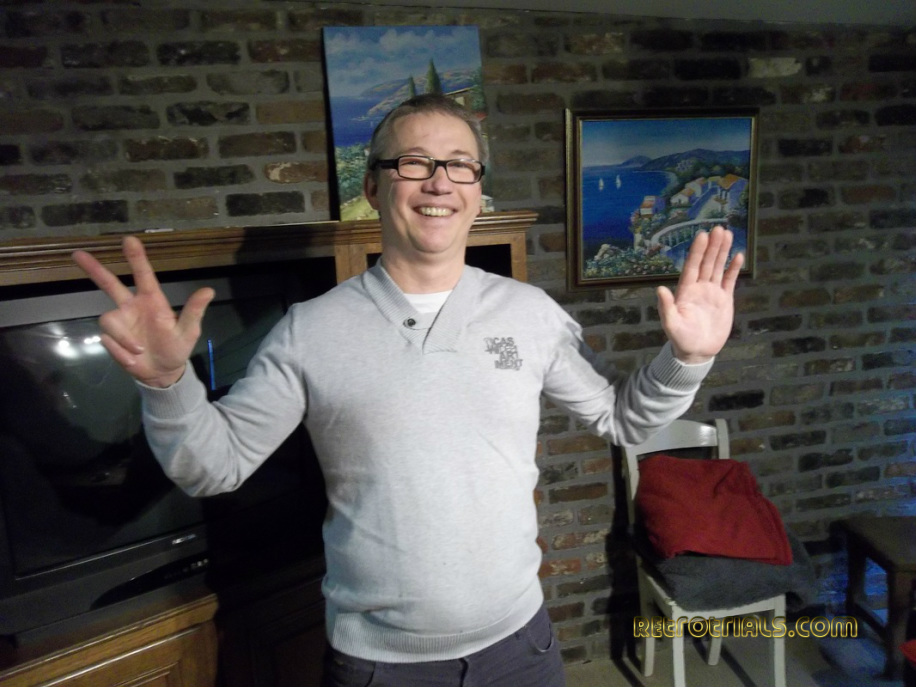 Eddy Lejeune Interview 2013 WWW.RETROTRIALS.COM
I asked Eddy about the motorcycle shop named "Domed" that he ran up until about 5 years ago.

I lost money, lots of money. I am happy to finish with the horse and I am happy to finish with the motorcycle. It lost a lot of money but I have plenty of space to make house for my son and my daughter. It is good to be able to support your family and if he need work, I have place he can work. The Lejeune family is very big here. Dominique’s father live behind our house but he is ill with the cancer. He is old, I think this his last year, he is 83.

With the clothes, or without clothes.

I explain to Eddy that he has been very very open with me, far so more than anyone else I’ve interviewed and explain to him that he might want things left out.

He say “no problem with everything, it is my life. Everything has happened, everything is ok

Eddy then took me on a tour of his home and told me that at almost every trial he would be accompanied by his wife and also his small dog. His dog would always be beside him and at the Indoor Trial he would sit there and once Eddy started his Honda the dog would sit up immediately recognising the noise of Eddy’s bike. Eddy’s dog also used to ride with him when he was riding his road bikes. The dog had a special hole cut out of the top box where the dog would stick his head up from.