So the day of test of ARIEL  15.08.2013 has come. Can not hide my excitement as we arrive to PUY, small and beautiful village in Italian Alps some 40 km west from Sestriere, location of 2006 Winter Olympic Games.(see photo of Puy)
We park our "Golf" on mountain road and are welcomed by Carlo Ramella and his friend,exellent trials rider PIPPO BARTORILLA.
But where "our" ARIEL is ? He is still in mountain shed waiting for us."I haven't ridden it since last year" Carlo says and I start having doubt if we can start it ?

But with help of Pippo and some kicks bike start "talking",so slowly I think engine will stop in next instant, instead it keeps on running. Low revs of engine are impressive by today standards and after warming it up it' s rider's turn now. Our "tester" is Justyn Norek Jr. MTB DH racer among top ten in Italy and keen snowboarder, old and modern trials rider so he has lot of experience.

Yet he has never rode such a bike.I see excitement in his eyes, mixed with some tension and respect.
He tries clutch and brakes several times and very slowly balancing let go Ariel down the stairs from shed. Now he ride down the road several times slowly to get used to bike balance and feel of brakes and controls.Slowly we see him more and more at home on bike, despite it's heavy machine.
Before ride we studied all photos of Sammy on his ARIEL published in various books, to catch up with his "body lean" technique.
Now we understand this expression much better, bike needs to be kept as much as possibly vertically,correcting with "body lean" balance.
So now it's time to walk to forest and try to mimic some Sammy's photos, we choose to take off helmet and substitute it with typical cup and pair of vintage Carrera 98-2S goggles similar to those used by Sammy in 60's.
Justyn Jr. looks now perfectly at home on bike,keeping it always pretty vertical and balancing with body on tight uphill turns.
Revs can be incredibly low and bike still pulls away with low sound, really "thump" onomatopoeic expression is best, more similar to locomotive than modern bike...
On steep descents bike is rather tricky due to it' weight and tires having some years now....as well drum brakes !
Our rider slowly mastered tight steep uphill turns, steep descents and stone sections.Accordingly to his impressions bike is very enjoyable to ride but needs very different approach also when you put feel on the ground !
Seat is high by today standards and with 111 kg of weight it' s better not to incline it too much.It's very stable on stones,rocky sections, and easy to manoeuvre  ,thanks to it's magic "Miller's" geometry and well concentrated masses. And with it' s 220 mm ground clearance it clears many obstacles. But of course it belongs to it's own era.In any case despite some difficult moments rider has managed not to drop this jewel. Of course we didn't attempt too hazardous or extreme sections.
After few ours of riding our tester was rather exhausted despite being fit, and became full of admiration to Sammy Miller' s riding skills !!!
Certainly it was magic Miller putting Ariel to so many wins.
Now some rest and we had great lunch with some grilled local meat and good red wine.
After we had photography session of static ARIEL, so if some photos are out of focus it' s due to "BAROLO" wine, 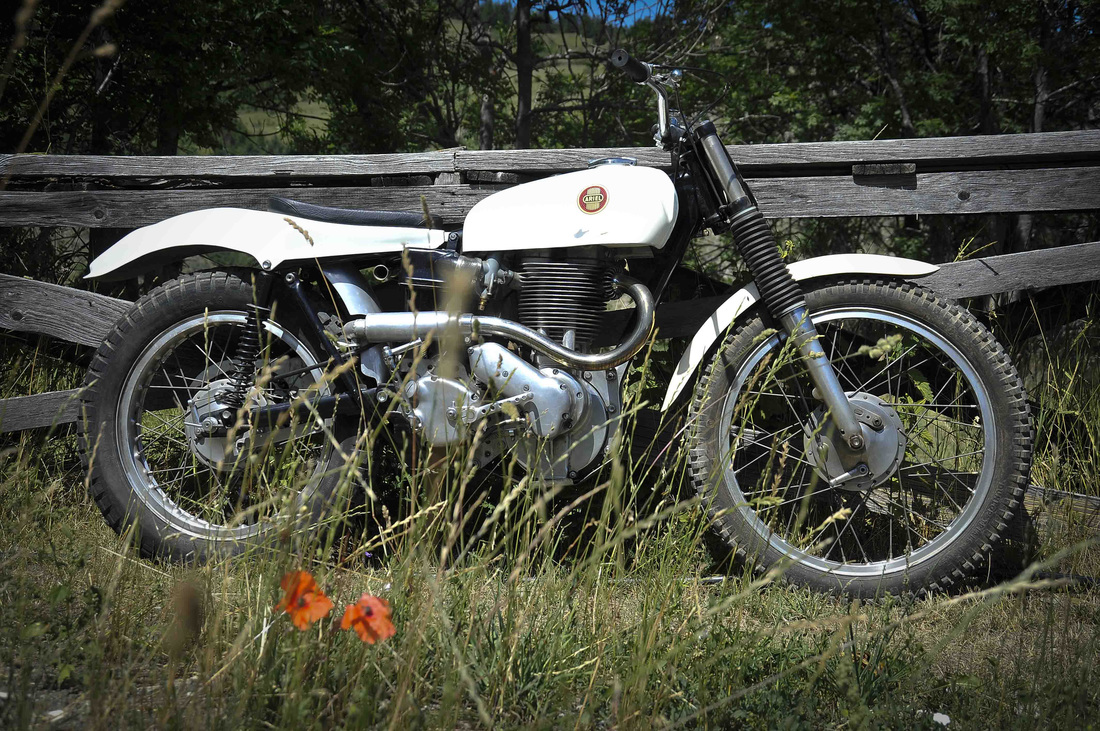