A   nice photo of  Pere Pi with Maria Isern and son Ot Pi standing in front of the family home in the hills overlooking Barcelona. 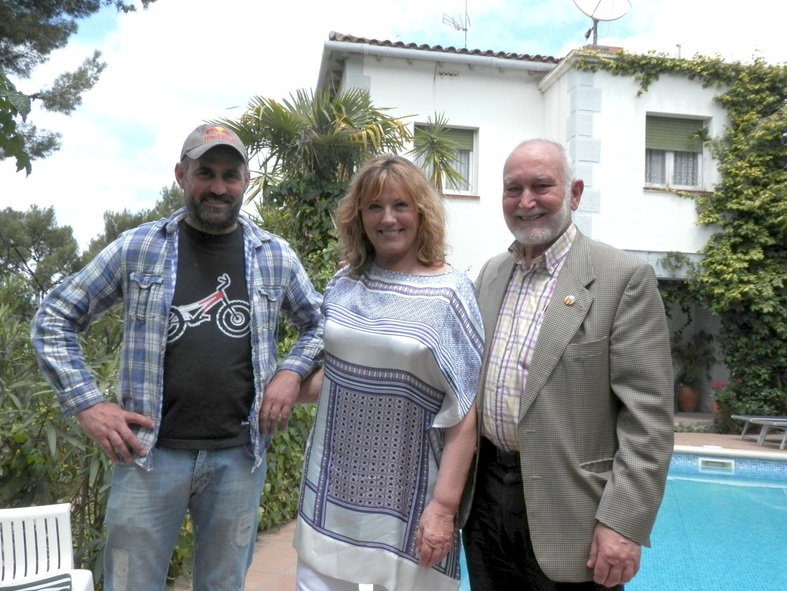 2014 Pere Pi Interview www.retrotrials.com
I'm not a very emotional person. I don't tend to cry, be clingy or kiss and hug everyone. I don't tend to tell anyone part from my closest friends how I'm really feeling and just get on with life, like you do. I didn't even cry when my mum died. Now that's an admission to make. It sounds awful doesn't it but I suppose I'm the same as many men out there. I'm sure its a macho thing. Men bottle up and don't show their emotions. I'm fairly sure it's on the pre tense that to show your emotions is overly feminine, girlie and a sign of weakness. Of course this may be entirely wrong, but I feel hard wired this way.

I'm mentioning this because when I began talking to Pere Pi I nearly wept like a baby. Sitting there and hearing him speak was a very emotional moment for me, although of course I did my very best to hide it, in the macho way blokes are accustomed to.

Why did i feel this way ?.... I think it's because of a couple of reasons, but I'm not going to explain to you the reason because it's just getting way to deep and way to personal and I'm a bloke and we don't do that sort of thing ;). However, make no mistake, this guys life really did pluck on my heart strings, more than anyone else I've met in a long long while. Strange isn't it. So as I sit here writing this report I'm reliving it all and it's all quite different from the other reports I've written. Nothing comes close.
Finally meeting Pere Pi,  feels to me as if I have found one of the most important pieces of the jigsaw of Trial. Imagine Trial around the World being a big jig saw. Well, until now I knew I was missing a huge significant piece. I knew i really needed to meet this man and speak with him. Pere is the man who has influenced so many. They still remember him today because of this.

Pere Pi is also known as Pedro Pi. Pedro is his natural name whilst Pere is his Catalan name that most people who know him, call him today. Pere is such a significant figure in off road motorcycle sport it's hard to describe. His huge influence stretches from Trial to Motocross and then to Trialsin, which is the sport of push cycle trials. Pere Pi has achieved so much in his life that it's very very easy to feel completely over shadowed and in awe of the man. He's done so so so much and positively influenced so many people as your about to discover.

Pere was born one year into the 2nd World war in 1940 which at the time of writing this report makes him 73 years old. His years on this planet have been jam packed with action. Its simply astounding how much he has achieved  and your about to discover it all and find out why Pere is one of the most significant figures is Spanish Motorcycle history.

Of course, amongst his elder peers and many in the Spanish motorcycle community Pere is well known. He is highly respected and regarded for his life's work in the sport. However outside of Spain, I feel that perhaps the knowledge of this great man dwindles a little. This is simply because Pere's great times were some time ago, pre internet and when information was less accessible. Before economical global communication existed. We did know what he was up to. Thanks to the internet , a Retrotrials lunatic and Easy Jet we will get you up to speed on what the World minus Spain ,has been missing .

'Pedro Pi organise the bicycle competition when I was young boy. Here is where I learn my skill for riding and competition. He was a kind and helpful man to me when my parents send me to the European cup in 1982. They send me to Mr Pi's house and him and his wife take care of me as if I was their son. As well, Pedro has been the most passionate supporter of Montesa. He is part of the heart of Montesa for sure. A man with great determination and great passion. I am grateful to him.'
Thank you to the Montesa , Pere Pi and Isern archives for many of the photos contained in this feature