Retrotrials.com has been very privileged to have been given all of this access, time and trust. I am very grateful to the Pi and Isern family for their openness to his crazy English guy walking into their home talking about the trial and moto days, as if it were yesterday and photoing everything :). The information that Pere has provided is great and will make this a really entertaining and interesting feature. Thank you.

My introduction came through Jordi Rabassa, the founder of Mecatecno. Jordi has been a great friend of Pere Pi since they were in their teens.
Here is a wonderful photo taken by the Montesa factory at the trial en Manresa in 1970. You can see Pere Pi (centre) competition and development manager of Montesa with Jordi  Permanyer (Son of Pere Permanyer, Montesa founder) to the left. Montesa rider Jordi Rabassa (later to be Derbi competition manager and the founder of Mecatecno) is to the right. Jordi is explaining whilst the other 2 men listen. 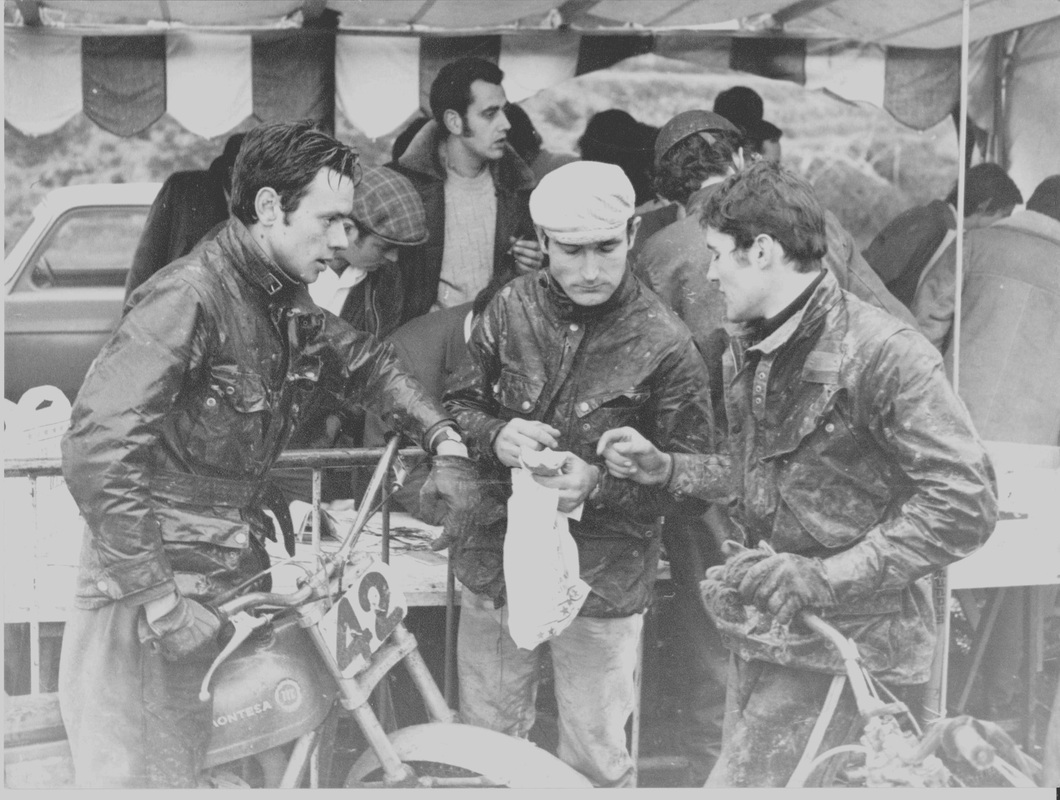 Son of the Montesa owner - Jordi Permanyer , Pere Pi and Jordi Rabassa. Photo the Permanyer family. 2014 Pere Pi Interview www.retrotrials.com
Jordi is a kind, honest and welcoming man who had forgotten about the Mecatecno days until I came along. Of course, several meals and talks later Jordi has told me as much as he can tell me about the company, however there is always more and he is a man who likes to tease me a little :).  Jordi does not throw everything up on the plate immediately. He serves it slowly over years. He tells you something is in the next room ....and that he will show it to me the next time I come  ha ha. It drives me crazy ha ha    :) .

The mention of a possible introduction to Pere came a little like this. Last year in 2013 I visited Jordi Rabassa with my friend Joseph Argerich who is a great lover of Spanish and Catalan motorcycles. We arrived at Jordi's metal gates and pushed the buzzer but there was no answer. I stood and spoke with Josep in the knowledge that this was normal. Jordi appeared and we followed him up the steps and onto the courtyard. We then alked up the grand stone steps , past the pillars to either side and in through the large tall front doors . We then followed Jordi into his grand formal dining room where we sat and spoke. I once again interrogated Jordi in respect of my mission to find the Holy Grail. An original photo of the Mecatecno Xops factory. Sadly I haven't found one yet. Jordi very kindly prepared some pasta and after we had finished he pulled out some photos from the Derbi factory.  They were wonderful photos taken by his family. As I looked through the wonderful old photos they beautifully captured the moment of the day. They conjured up the atmosphere at the factory parties in the workshops, at the races and at the Derbi anniversary celebrations.

Jordi saw my interest and mentioned his friend Pere Pi and that perhaps I might want to visit him. My eyes lit up "Yes please, that would be brilliant ! ". Then I went home to England sure in the knowledge that I would return to Spain again soon.

A few days later an email popped up from Jordi and the opportunity to meet the great man Pere Pi slotted into place. A date and time was agreed, a few weeks in advance. We would be meeting at Jordi's house for the interview. I am very conscious that from my perspective the best reports tend to evolve from home visits, however I was told at this time it just wasn't possible. I could understand this. Perhaps there were reasons ? I wasn't sure what it was, but caught my Easy Jet flight to Barcelona as planned. When the day arrived I started to become quite nervous about the meeting.

Pere is one of the Seniors of motorcycle sport. He is one of the highly respected top table of motorcycle Grand fathers. He is held in very high esteem, not only by Jordi Rabassa but by all knowledgeable motorcycle followers in Spain. Outside of Spain he's well known, but I feel, not as well. This meeting and interview would give an opportunity to tell Pere's story.

I arrived at Jordi's at the same time as Pere and following him up the several stone steps above the road to the front of Jordi's house. It was there that we met and Jordi introduced us. It was great to meet Pere. 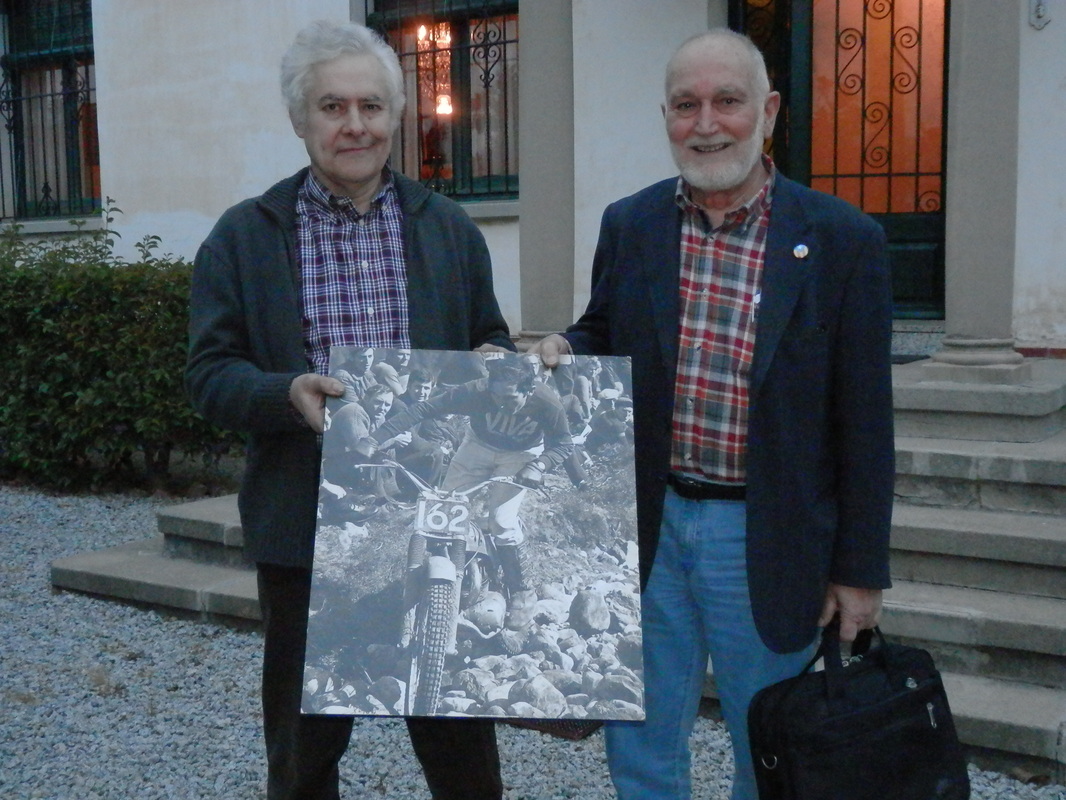 2014 Pere Pi Interview www.retrotrials.com
I had read and heard so much about him from my previous visits that I was keen to sit down and ask him the questions I had prepared. However, it didn't work out that way. Jordi then led us both into his dining room where we sat at his large hardwood table. The paintings, photos, ornaments and cabinets around the room filled the walls up to the high ceilings. The large shuttered timber casement windows looking out to the side and front are original.

Now, before we start in the interview I'll explain 2 things that are important. The first thing is that Pere just started talking and telling his life story. Some people are like this and they don't need questions to start them off. With Pere, it just all flowed seamlessly. It was only at the end that I really just filled in the areas I wanted more detail on.

The 2nd thing to remember that this interview was conducted in March 2014 and this is when I took the photos of Pere in Jordi's dining room. The other photos taken at Pere's house, the Montesa factory and the Isern Museum were taken later, on a return trip to Spain in May 2014.

Oh ...one more thing to remember. Pere is the World's no 1 advocate of Montesa. You'll learn how much in the interview. This is the most passionate interview I've been involved with. When you read it, you'll understand. 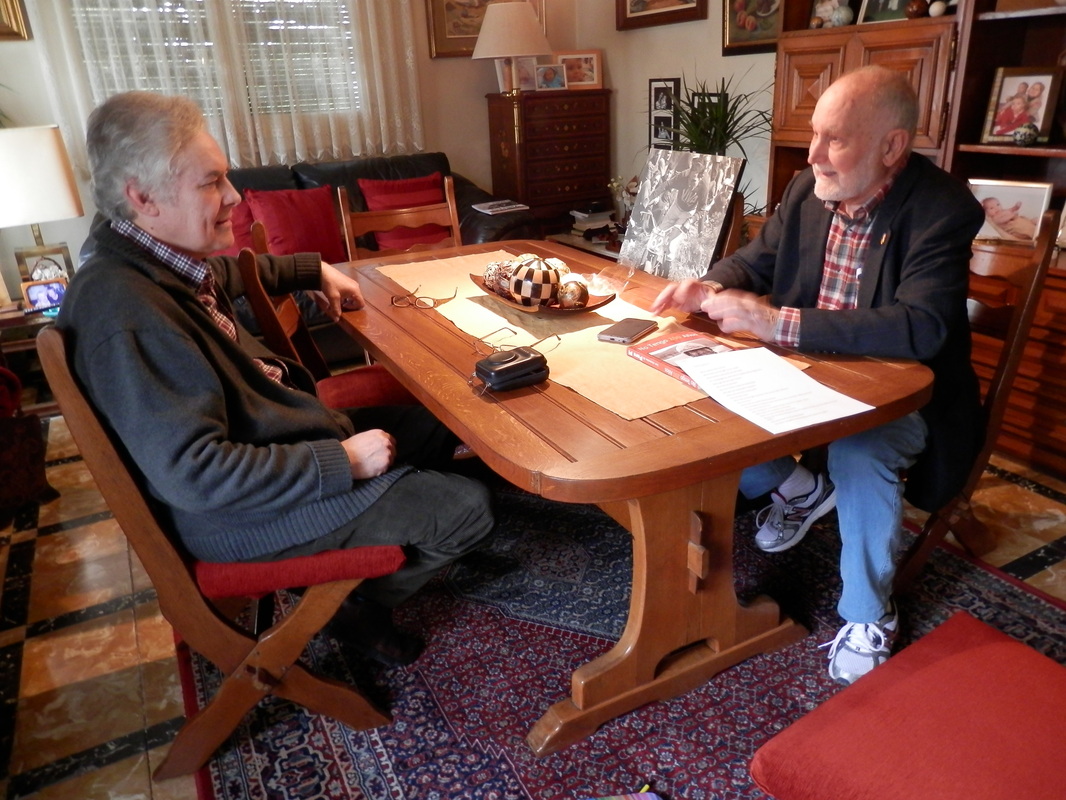