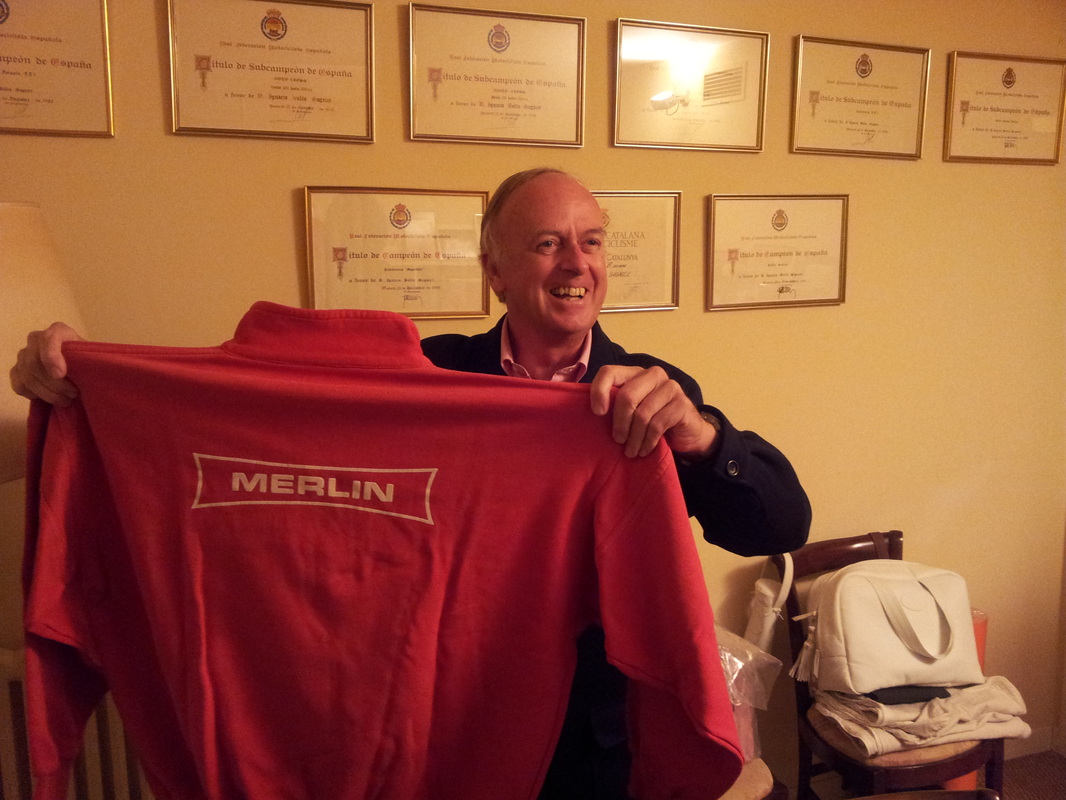 Ignacio Bulto interview Bultaco
Did Paxau ever work at Fornells?

No, always at Toreo . In fact, Paxau was the owner of Gallach bike but his ideas that were very good ideas were put in the production bikes as soon as possible

When you chose the Cagiva engine did you travel in Italy?

Yes, I go there to meet the two Castino brothers, very funny people. We have travelled so many times there

Did Cagiva change the engines for you?

Where were the chassis made?

Outside, everything made outside, assembly only. Monfort made some chassis at the very beginning but at the end the chassis were made by Manyolas . It is a very beautiful small village beside the lake, near Corona .

At the time of the first DG, the Fantic 200 was around. It was very light and high revving. Why did Merlin decide to go the heavy powerful way and not the light small power of the Fantic?

Because this bike was from the experience we have had in Bultaco. It has been the moment that Bultaco have been reboring the trials bike until we have reached 325cc, on the other side Montesa has been reducing and has gone to the 123cc. The Bultaco had a lot more success than the small bike and our experience told us that the big bore for trials was much better than small bore. The Fantic for example was very well done but was critical to ride and they have tried all the time to be a little bigger, so even today if I have choice and had to make a trials bike with a petrol engine I would chose a big bore. The traction is much easier. 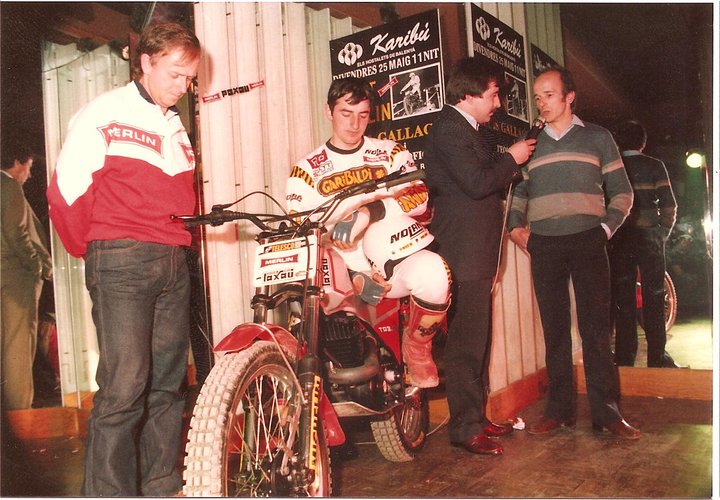 Ignacio Bulto to the left. Lluis Gallach on the bike and Paxau being interviewed upon the release of the first trial of Merlin, the DG350 1982
Did the children’s bikes sell well?

Did the first DG sell well?

Then the first rider for Merlin was Juan Freixas. how did you find Gallach?

He was at the time in Spain a boy for Montesa and he was good, very good. We wanted a rider that was as good as possible but not too expensive as we were very small. We have a different philosophy to bultaco . I always knew not to make the same problem as the company but one of the problems of Merlin was that it was too small. We wanted a good rider and we thought Gallach was very good 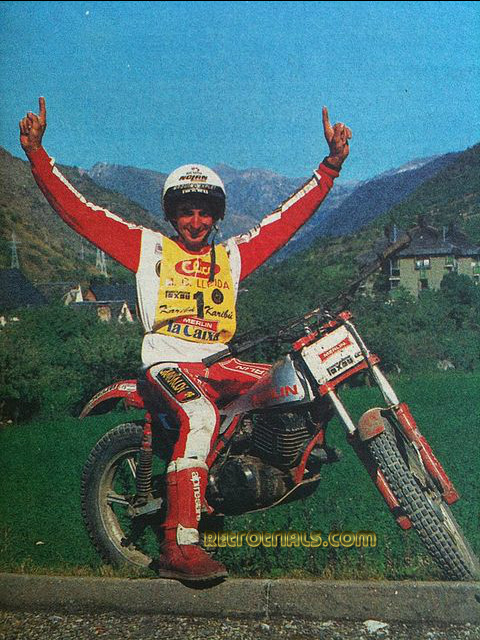 Lluis Gallach - Twice Spanish Champion on the Merlin
What were the problems you said in being to small?

The problem that stopped Merlin is because the factory was to small in it possibilities. I will try and explain. We were just living from the Cagiva engines and we had a lot of help with Cagiva parts but thing is the financial dimension of the company was to small we have to adapt to many pieces from Cagiva to make our bike, the engine. We would like our own engine but the problem is the financial dimension.

Which other engines did you look at?

We looked at villa, rotax but they were not really a trials engine and at that moment I tell my associates that we need more investment just to make a real trials engine. I could not convince them to give this money. 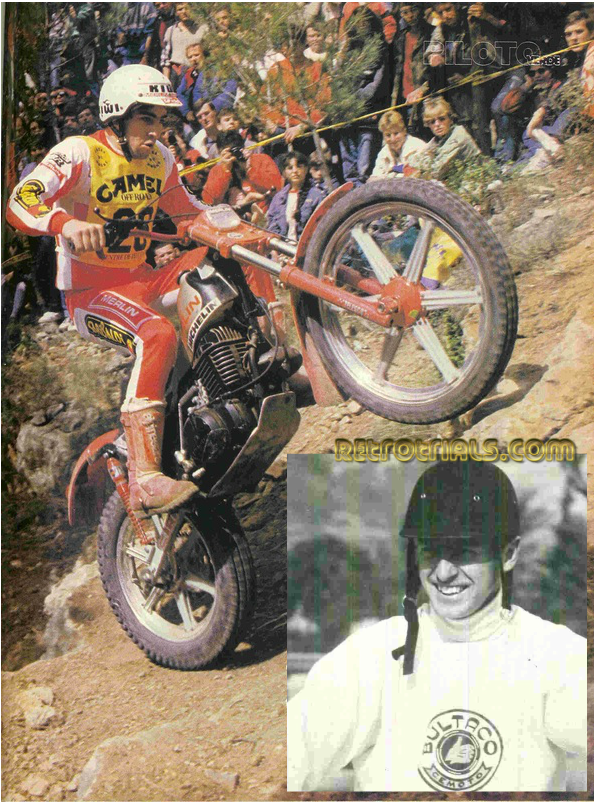 Juan Freixas on the beautiful Merlin Gallach Replica Ignacio Bulto interview
At the time of making the Gallach bike was Merlin a good business?

Yes, yes. But then this was the right moment to make a step and to go for the real company and to be solid, it needed to have more investment.

Who came up with the idea of the strange wheels of the Gallach?

Myself. Yes, yes. I have a friend in Barcelona they were making our hubs and they tell me I have a wheel that perhaps you will like it has no spokes and arms. Interesting I will have to test that. Nagesti make these and the whole wheel, we develop this and started with six arms in the wheel and then go down to 3 arms. We also have a special support of the disc brake.

This was very strange and a big risk wasn’t it. This was the first. why you take the risk?

More than one thing, at the time the the manufacturers were proposing to use the tubeless tyres. To put a tube less tyre on a wheel with spokes at that moment was not so easy and very complicated, we had to put a special rubber on the inside and it wasn’t right. The arm wheel solved this as it was a solid ring. The 2nd reason was that it was easier to steer the bike as it flexes less than the spokes and the tubeless tyres were better and you could be even lower on pressure and the bike was stronger more in between the tyre and the rim.  At the end but less important was the fact that it gave Merlin a commercial difference. it was a different bike that made our bike standout. So we try to combine all of these advantages

Was the engine different on the Gallach bike?

Was the chassis different?

The front suspension was magnesium by telesco.

Did the Gallach sell well?

How many did you sell?

Why didn’t you make more?

Because it was getting older by design. at the time if you didn’t have a monoshock it is very difficult to sell. When we started with the first DG, at that time I wanted to go with a more innovative bike but my father tell me Ignacio be careful. Don’t go to much risky things as first you have to have a factory and the money has to come with no problems, that’s why we make a little like a Sherpa but will improvement. The bike was going very very well and Gallach won 2 championships in Spain but all the competition were just having mono shock bikes and we had to change it. Although it was going well the image and the mark wanted mono shock and this is why we change it 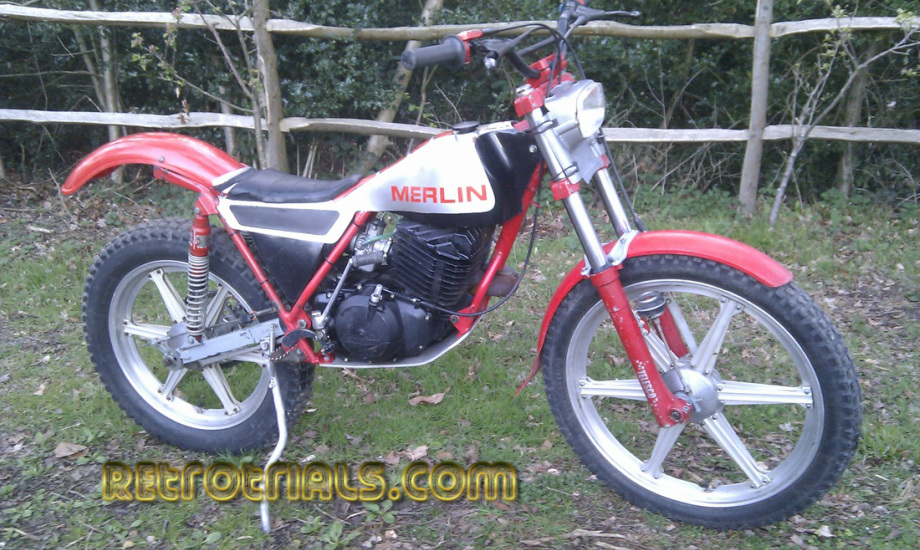