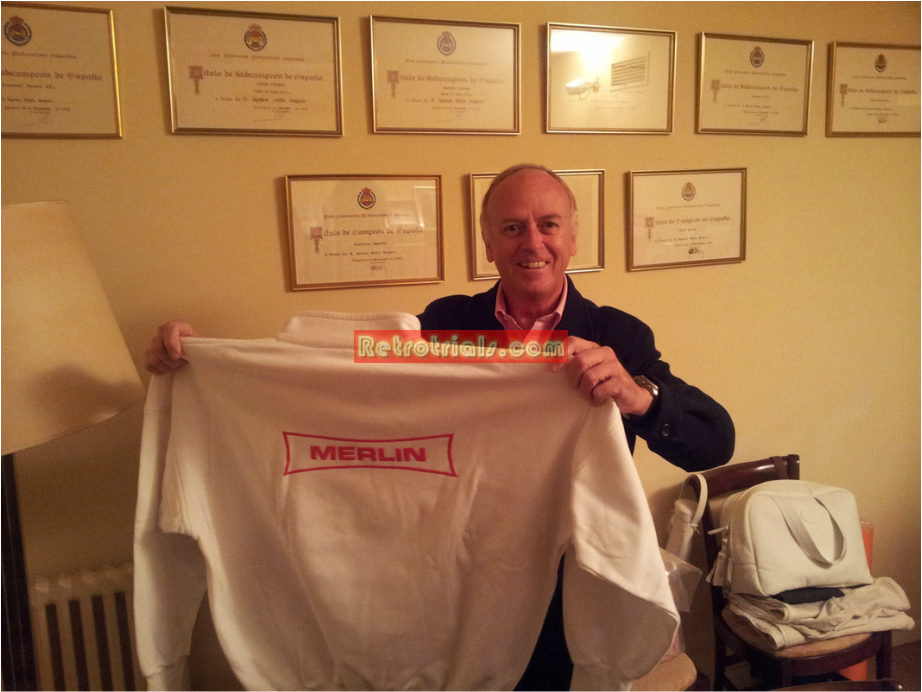 Ignacio standing in front of his many Championship certificates
Who designed the back suspension of the fius?

By one designer in Girona that I lost his contact long ago.

What was in the attached building to the left hand side of the Fornells factory?. Im aware that Wemota and Hebo  have been there. There was a doorway from one to the other.

The building that was Wemoto made pyjamas for babies.

In Toreo, Paxau has a 1985 monoshock bike like the Gallach . What do you know about this?

Little things I do not know much of this 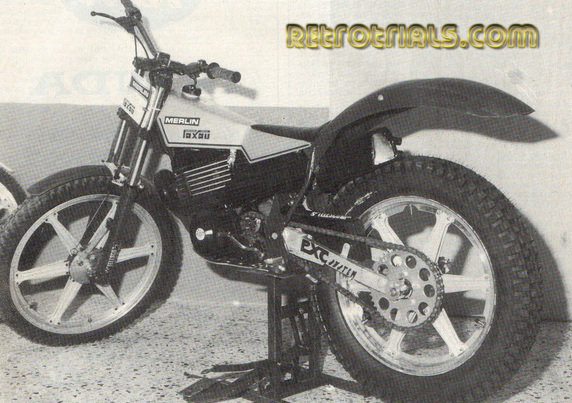 The Paxau prototype based upon the Merlin DG350 Gallach . Ignacio Bulto interview Bultaco
Did you ever see this at the time? It looked like the Merlin.

I do not know this

In 1986 Merlin releases the white FIUS. Who design that bike?

It was designed in Girona, with that boy I tell you and at the time my cousin Manuel Marques comes to
work with me at Merlin and he has also been involved in the designing of bikes. The styling of the bike
was designed in Acerbic in Italy with Frank Acerbis. He is a very good man, he has been working with us
making prototypes and we change it here and there and we then make the styling.

It is a very strange exhaust?

Yes three 2 chimneys.This was an idea I have seen in Montesa, I don’t remember which model , but I thought that it was a good
solution because like in the Paxau solution with the exhaust under the seat with this one you could
concentrate the masses to the centre of the bike. Also with the mono shock you had a lot of room at the back on the sea, if I had to do this once again I think I not do this.

How did it change the bike, the big exhaust?

Because you need some room to make the gas expand and come back and there is not a lot of room in a
trials bike.

Did they sell well?

The white one selling not bad, but not a big success like the red one

Lluis by now has gone?

Yes and we have Pascal Couturier who was good rider, but not a real real winner.


Sales were not so good on the white model so you look at the red model and what did you do?

I made contact with Eddy Lejeune because he was left by Honda and had no bike. He was not too
expensive as he was not at the top of his career but he had a lot of name. The trust of having Eddy on the
bike helped to sell a lot of bikes. He helped us a lot and he was telling us a lot of ideas that have been
very good.

How many Merlin did Eddy have?

2 for the competition and 1 for practice

Who else test ride the Merlin? 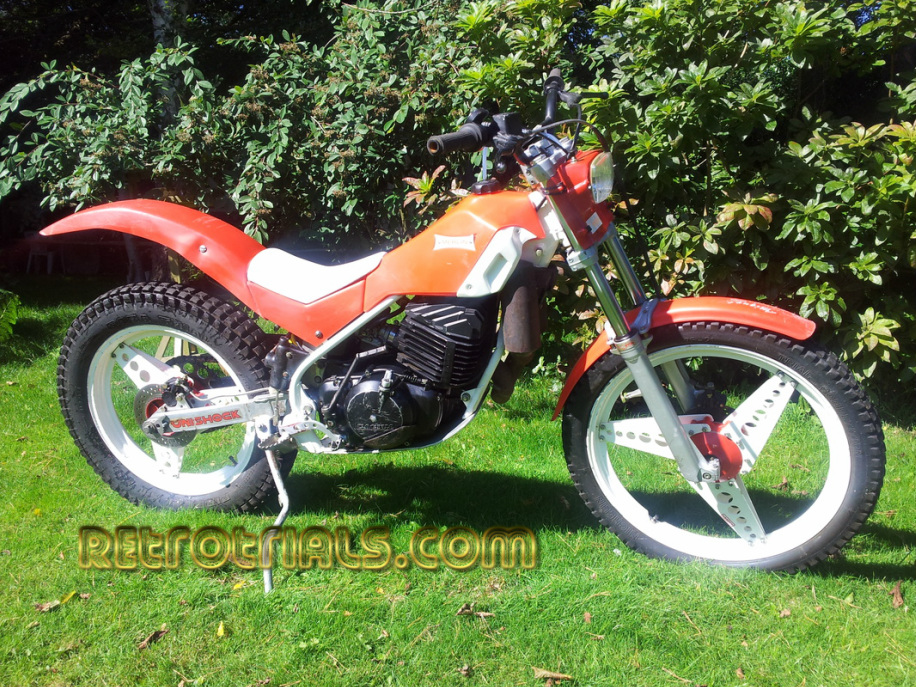 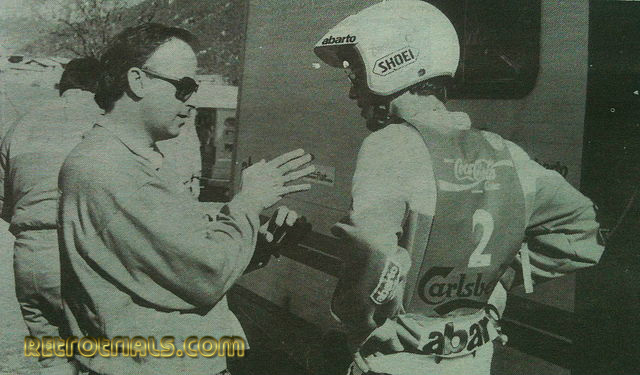 Ignacio talking to eddy Lejeune. Ignacio Bulto interview Bultaco
It was a French person with a very strange personality. It was Thiery Girard he was very talented but with
a very strange personality. Girard used to beat Tarres as a boy on cycles. He has test the Merlin and we
have been to his home. He was racing with Sontato Yamaha and we have seen him and we want him. We
have seen him ride sections on both the Yamaha and the Merlin, with the Merlin he was able to do more
with the Merlin than with the Yamaha. He comes to factory and takes his two white Merlin to France and
has signed a contract. One day I arrive at the factory and find the 2 bikes on the side of the wall outside. I
call him and he say I cannot ride for you. I say why not, if you have a problem you can talk with us, we
don’t want to have a rider that doesn’t want to ride with us, he say the Yamaha boss has called to me and
said it was mistake to go with anyone else, he had not raced with the Merlin. It was very strange to not
talk to us and just leave he bikes like this on the wall. This is why we have then contact with Couturier.

Jordi Tarres tell me he tested the Merlin?

Yes, yes we wanted Jordi Tarres and we have contacted and offered him. The first time we have
contacted Jordi is in a cycle trial race. We have taken 2 Merlin twin shock to the race for any rider to try.
Jordi ride this bike and he was doing fantastic things with the bike and we say Jordi we want to contract
you. He say, I don’t know. We say, think about it, he was professional and world champion on the cycle.
He was very close with Trueba very much. They were stuck together then afterwards we have offered
him many times and he has said I cannot leave I cannot leave. He was the best by far.

Steve Saunders tell me he test ride the Merlin?

Yes, I remember hearing this. He has been to Girona testing.

Merlin have the 3 spoke wheels and then Mecatecno do the same thing. What did you think about this?

I was happy as I thought that Mecatecno was saying that this was a good idea. If there is more than one
making the development, you can run much faster. 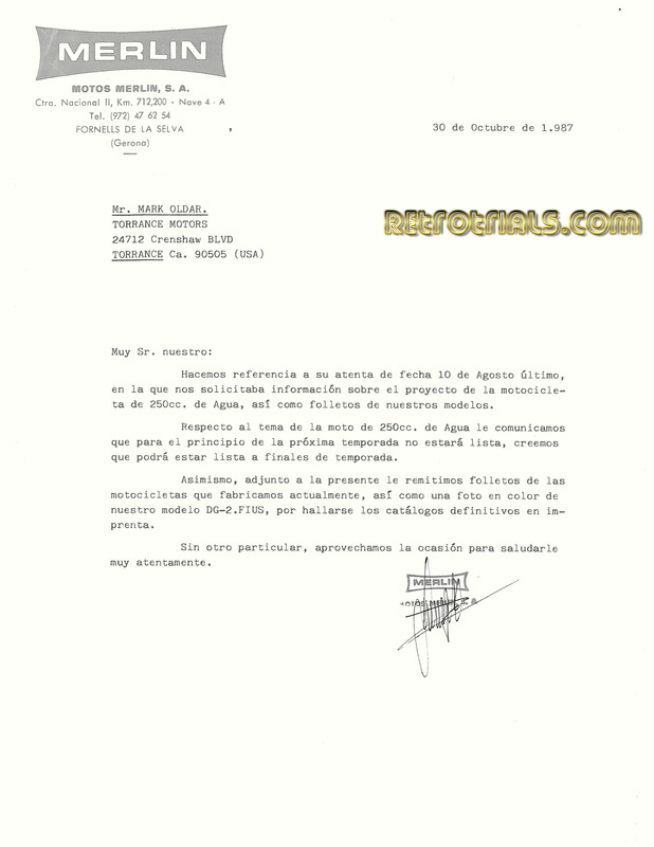