Diego would be joking around all of the time. Hitting on the girls and he didn’t know a lot of English so he wanted me to translate all of the stuff to the girls or whatever. The only thing he knew in English was I’m an Italian drill, black and decker drrrrrrrrrrrrr ha ha ha ha ha ah.
It was good fun. It’s what 18 -20 year olds talk about. We went to a restaurant and instead of giving the waitress money he would just give her the room key and say be there at eight o’clock. He was joking around all of the time, going to the mall and spraying the perfume all over, just the stupid stuff the kids do, we had a ….we always had a really good time with Diego. We played around.
It sounds as though you had a very sensible approach to trials?

Yeah, back at home I never felt any pressure. We never set any goals apart from let’s do as good as possible. If it was 10th at the World Round or being World Champion it didn’t really mater. It was always the same goal, just do our best and at the end of the day we’ll see how high you’ve got us. This was our moto all of the time.

So, I’m just getting the picture that you were this really sensible bloke ha ha ha ha ?

Yeah yeah ha ha I was really good, the small kid. I was shy and quiet and me being the only one knowing English I had to communicate with everyone in America as many of the team didn’t know what to say. I remember we got in trouble at the hotel. The hotel was kind of square and you have a hotel in the middle.
It’s a Finnish characteristic that they are drinkers. Italians aren’t known for their reserved personalities either. Did you go out on benders?

No, not at all. I’ve never had a hangover so far. My parents never used any alcohol so I was never grown in this environment. At some time I decide that I don’t like the taste of any liquor or beer and I didn’t really see the point of getting drunk or what’s the fun in it was. I’ve been drunk once or twice in my life so in that sense I find it boring.

You had your first podium in Gefrees Germany on 30/9/89? Can you remember this?

Who was pushing you to do better at this time?

None ever needed to push me. This has never happened to me. I’ve never felt any pressure about doing better.

In 1990 you had a string of podium finishes. Did you feel at any time that the Championship was within your grasp for 1991? 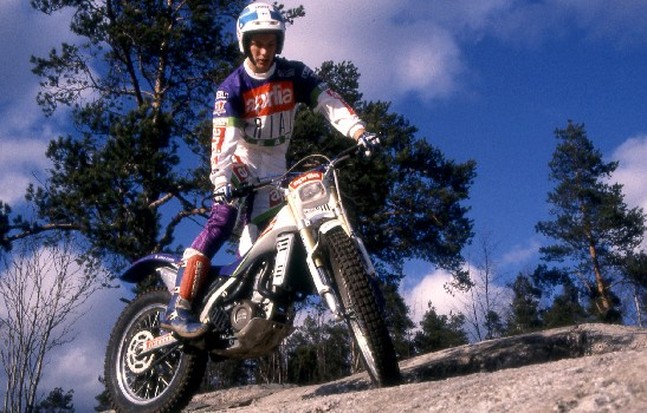 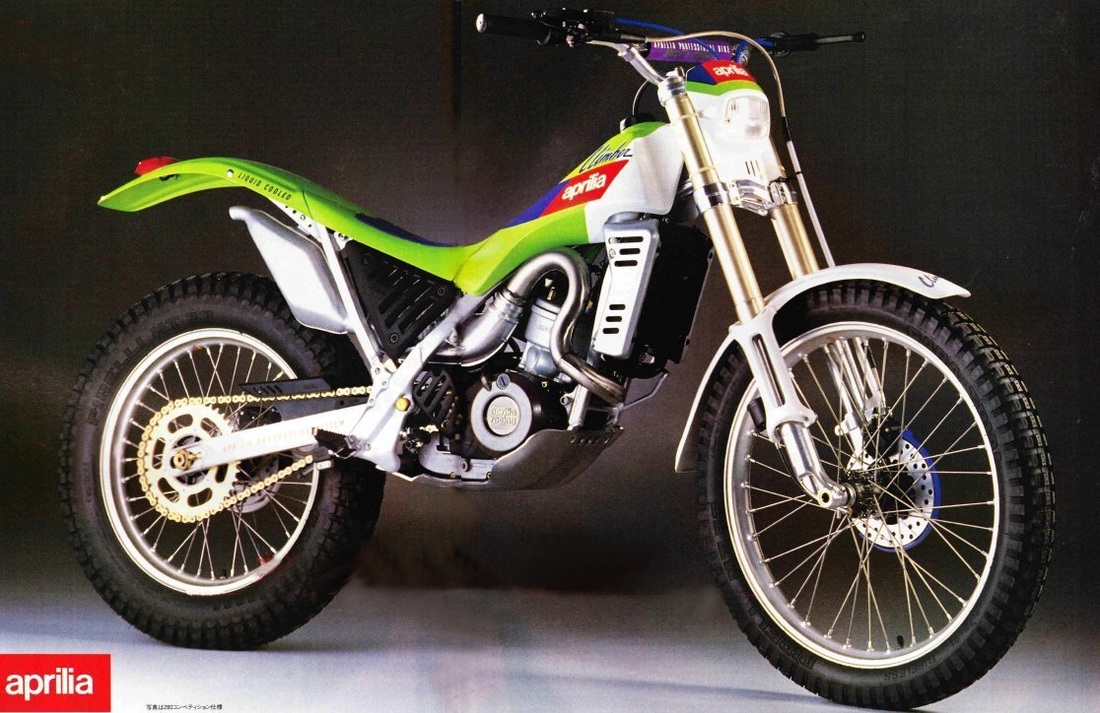 2013 Tommi Ahvala Interview WWW.RETROTRIALS.COM
Team Aprilia took their trials seriously. They didn't just send a couple of riders along to national events, they flooded the event with green. They were a force to be reccond with. 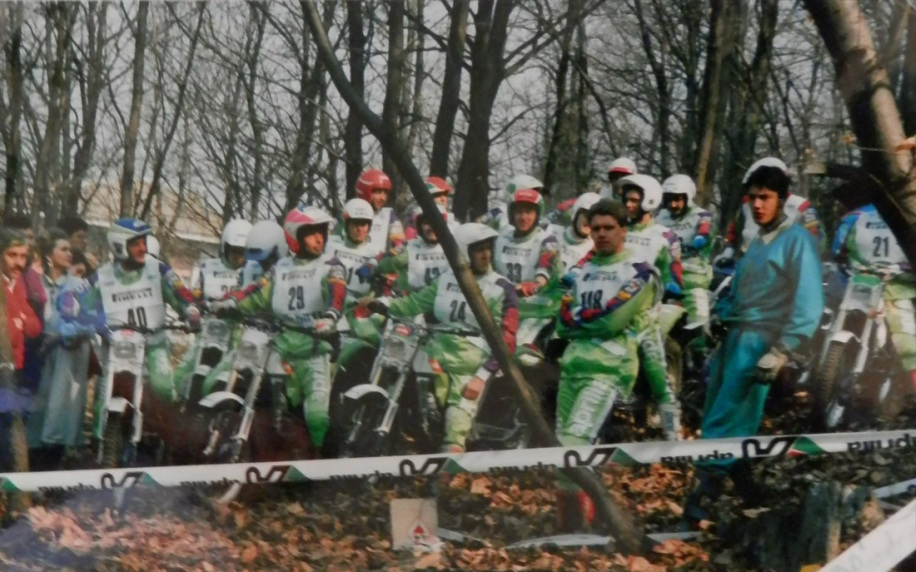 2013 Tommi Ahvala Interview WWW.RETROTRIALS.COM
Jordi is thinking - "I wonder if that Aprilia runs better than this Beta". Its all there in the Tarres interview 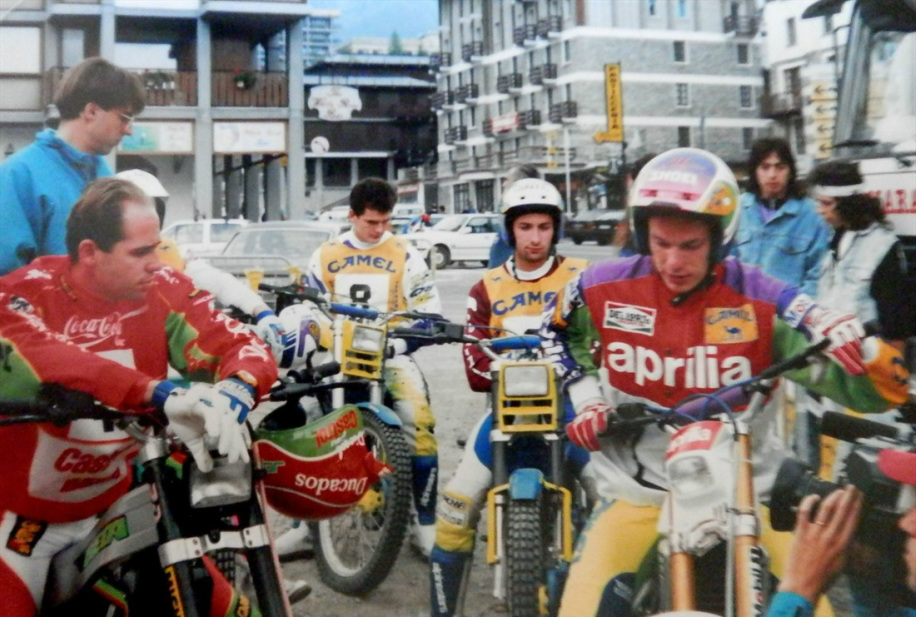 2013 Tommi Ahvala Interview WWW.RETROTRIALS.COM
Of course, naturally we thought we were doing really good as we were going up all of the time, so I’m sure we kind of knew. It was never brought up. It would have created un-necessary pressure. Things were going well with Aprilia. We were locked into a contract and we were happy there and I remember we talked with other factories as well but it was just to get the price up basically, make them scared, but we had no problems at all. They gave all the support I needed and helped me a lot all of the time so there was no reason to move. There was good backing and back then a lot of factories they had a good bike but Aprilia was exceptional. They would ensure my bike was perfect or each event.

For every event we would have a brand new mirror polish skid plate. The bike was like brand new every time. It was really impressive and everybody else would say how impressed they were with the bike. I remember the English World Round where they had this waterfall when we went underneath it. I think 89. The paddock was full of mud and so they actually carried my bike to technical inspection so the tyres wouldn’t get dirty for the picture so they carried it about 300 feet or so and they carried it back. It kind of shows the determination and how important it was to them. They were really proud guys. If you saw the Aprilia factory it was like a hospital. You could walk around in your bare feet, everything was immaculate. The guys at the trials department were kind of a pain in the ass as they wanted everything to be perfect and it showed in everything. It was kind of nice being clean and everything being organised and that’s why working with them worked really good.
In 1990 you finished 4th. You were on your way?

Yes, I was pretty consistent and everything worked pretty good.

Well, we knew we were heading in the right direction and we had a chance to win. None of the top guys could do anything that I couldn’t so getting a bit more consistent and working harder we might have a good shot at it. 1991 started good and it went all the right direction and I stayed healthy and I had no injuries.
Tommi would start the 1991 season on the green and white Aprilia and later mid season ,change to the later 92 yellow , red and purple model.
The end of 91 would have coincided with the end of your contract with Aprilia?

Yes, I remember the race at the end of 1991 was really nerve wrecking because Diego, Donato and myself, all three of us had a chance to finish second basically. I was 4th at the time so I had to win and Deigo had to finish no worse than third or 4th so I had the least chance of being second. That was one of the really good races. I think I won the event by 30 points. I had 26 and the 2nd rider had 54 so I rode exceptionally well. Donato was my team mate and he kind of dropped out already before the race, he said you know he will help me but Diego was riding in a different team, he was my opponent. Everything happened to work out and he was a little nervous and he didn’t do real good and I think he managed to get 2nd position at the end of the season. Donato didn’t help me out, but it was just in case just let him know. He didn’t need to do anything.