I think I have had 7 or 8 perfect races where I was really happy with them and couldn’t do any better. That Czech event at the end of 91 was one of them, when I smoked everyone and there was no chance anyone could beat me.

Were you enjoying trails at this time?

Yes I was loving it.

Was there a reason why you always stayed with Italian teams?

No no, it was just the way it worked out. I remember Montesa, there were some question marks about Montesa back in 88, I don’t quite remember what it was, comparing it to the Aprilia team it wasn’t quite the same standard and so impressive so actually Fantic like I say was our first choice but Aprilia wouldn’t let us out of the factory until we signed a contract ha ha. We took a risk there but it was a sensible risk. My father thought it would be a good idea to go with them so we did that
STOP !  - We're back in 2013 and we've arrived at the trial, so lets have a look around and see the way the Finns do competition.

There was a turn out of about 40 riders here for this Finnish Championship round. There were 3 routes to ride on. Lets have a look around the paddock first.

The first guys I meet are maybe the best riders at the trial. You can see Tommi of course. To the right of Tommi is ex World Championship rider Joachim Hindren, but just call him "Joa". He was a superb rider back in the World trials of the 90's, scoring points. To the right of Joa is Timo Myohanen. Timo is an incredible rider who is currently riding the Youth World Championship.

Timo is Finland's great trials hope for the future. To the left of Tommi is Timo's minder. 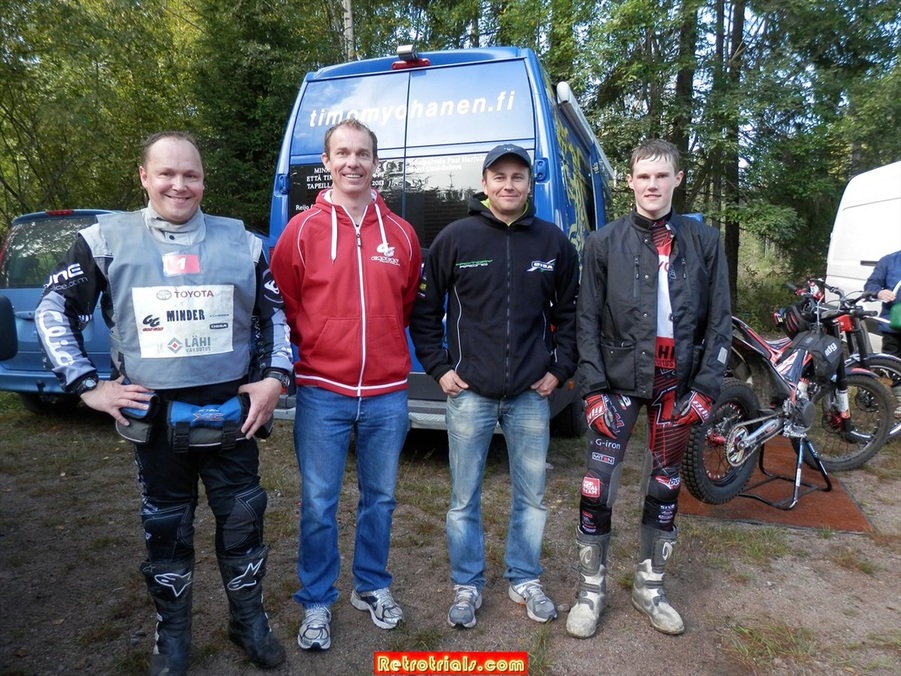 2013 Tommi Ahvala Interview WWW.RETROTRIALS.COM
Joa Hindren riding the World rounds
Lets have a look around the paddock. The riders start by the small shed in the centre and go straight ahead off into the woods. The red tent to the left of the shed is the Finnish equivalent of the food wagon. Here keen club members have a stove going and serve coffee, tea, traditional thick savaloy sausages which they serve on their own in a paper towel. They also serve a doughy pastry with meat inside, a little similar to a pasty and gorgeous. 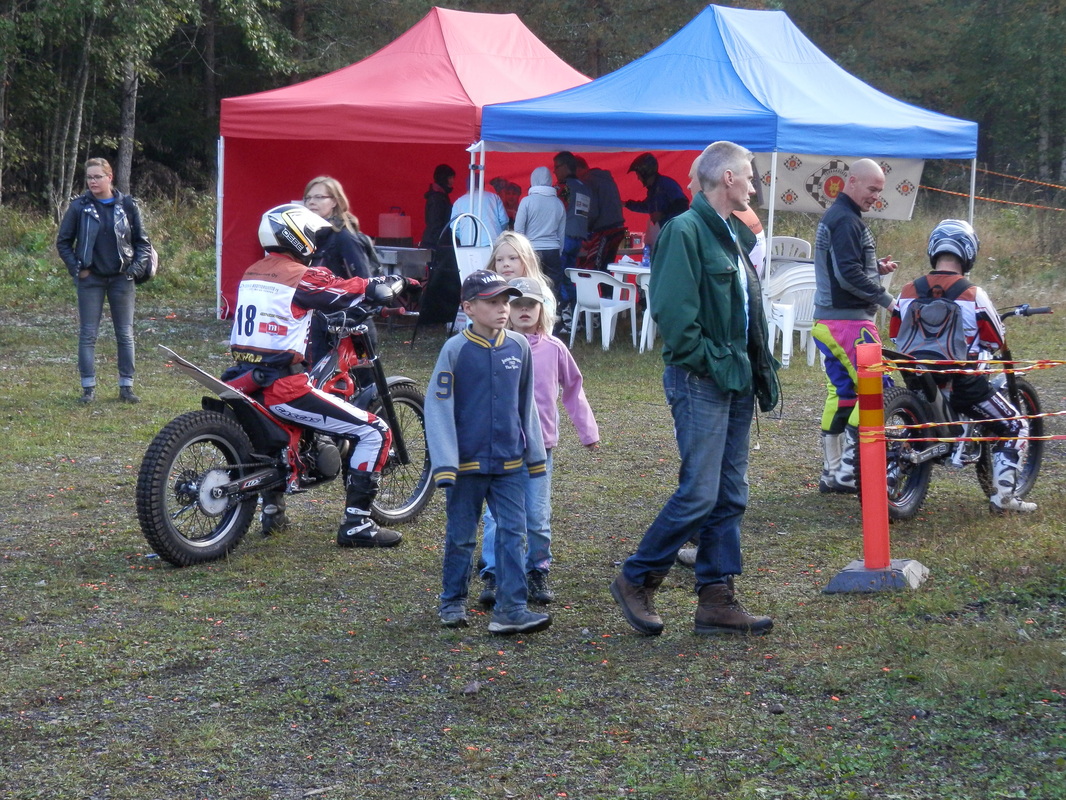 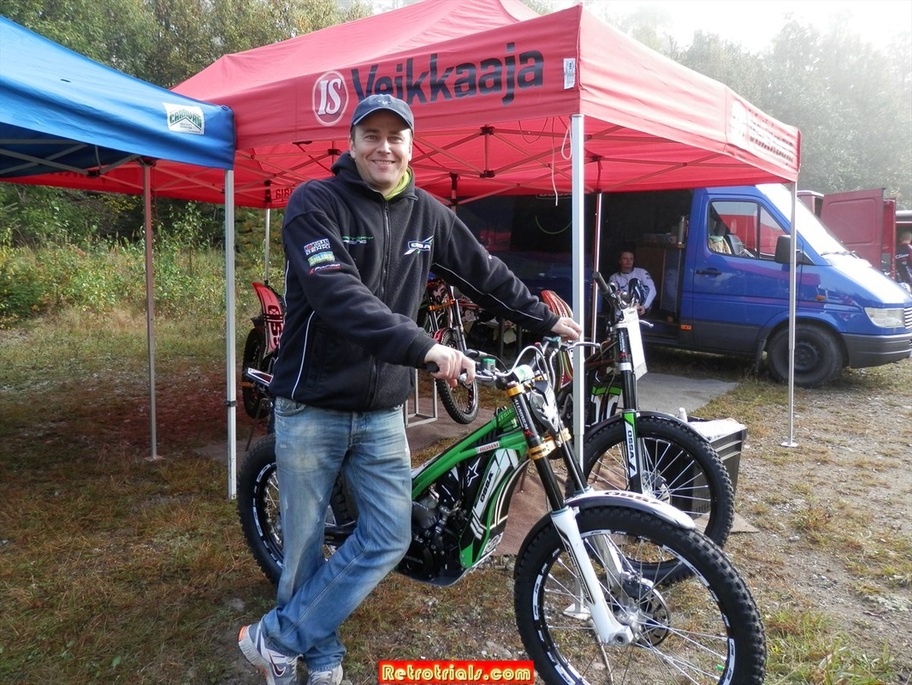 2013 Tommi Ahvala Interview WWW.RETROTRIALS.COM
Can you see the man sitting on the chair in the blue jacket. Well he is Paavo Kymäläinen and he is Finland's trials journalist and runs an excellent website all about the Finnish riders and trials. I will make sure the link to this site is displayed at the end of this feature interview. Paava has followed Tommi's career from the very start. He speaks good English. He explained to me some thing similar to what Tommi had said earlier. Tommi's father, Jouko was the most prominent advertiser and organiser of the trials in Finland. Paava took up the reigns at a natural point. 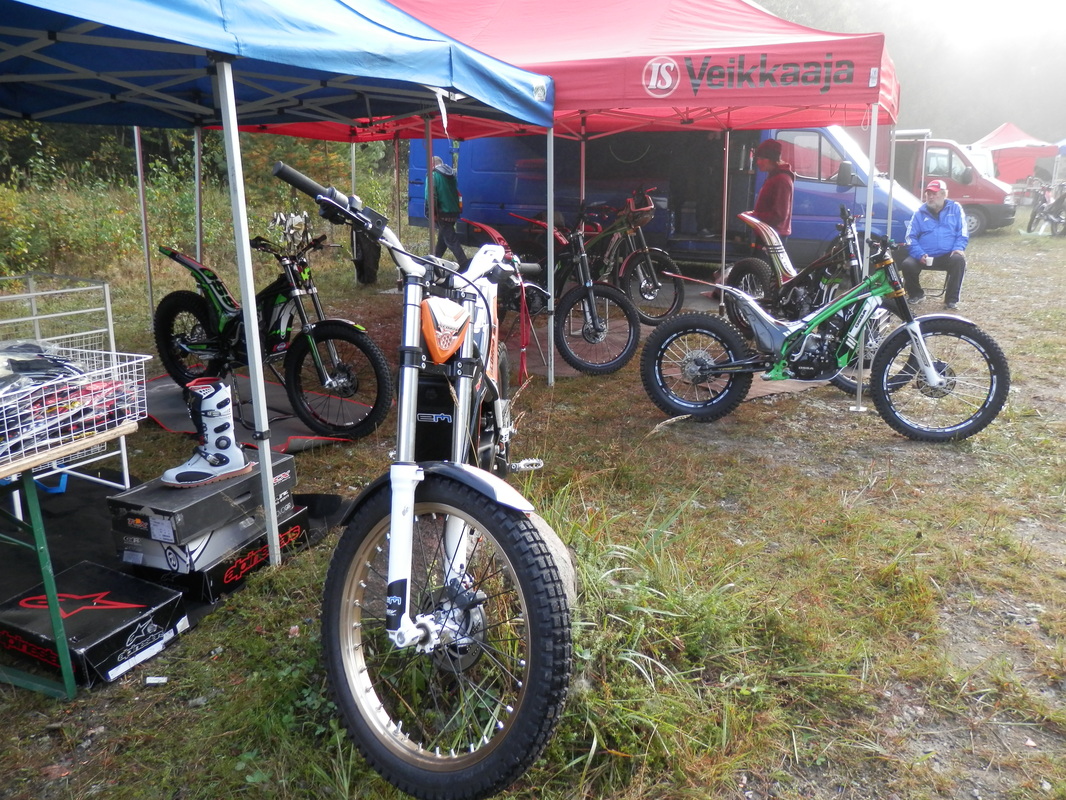 2013 Tommi Ahvala Interview WWW.RETROTRIALS.COM
Joa also had on display this electric Scorpa trials bike. This is the first full size electric trials bike I have seen and I was keen to have a spin through the woods.
Joa was kind enough to let me loose and off I went for a few minutes. It's a very stable and good handling bike that feels just like a regular petrol engined bike. The power is perfectly good for beginners and club trials and has 2 settings as well as a variable throttle that feeds the power in smoothly. So it's good news all round. The clutch is best not touched, but as you can't stall the engine there really isn't much need to use it anyway. Just control it all by the throttle. It's a beginners or a clubman's bike. It's perfect for riding in your garden where you can't create any noise, as it is almost silent.
Another view. You don't visit a Finnish trial every day.

2013 Tommi Ahvala Interview WWW.RETROTRIALS.COM
This was the first trial Tommi had come to in years and years and years. Some of his riders were here and as this was the last round he came along to offer them some support.
Off they go. If you look carefully at the floor you can see the orange bits from clay pigeons. This is a popular venue for shooting. 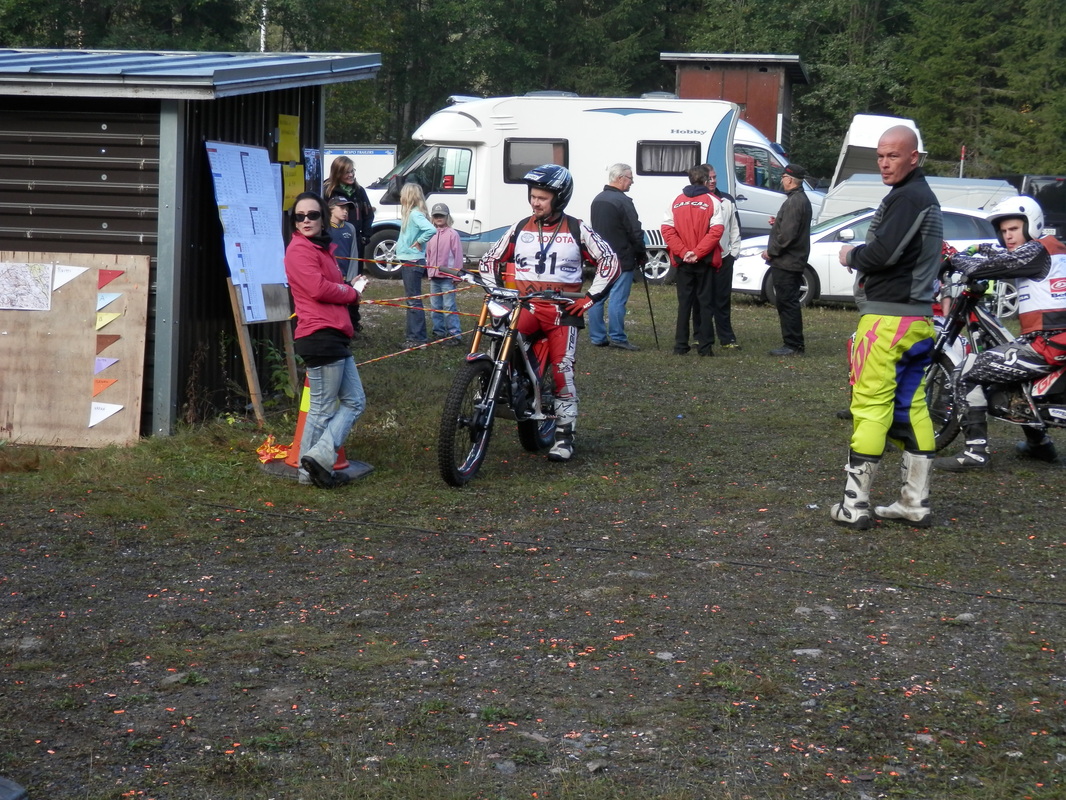