I wasn’t receiving any support at this time, as I wasn’t riding trials events. When I went to Beta and started riding British Indoor events in 1989, I was riding up against Saunders, Scarlet and Shirty. The only big traditional trial I rode in 1989 was the St David’s and the Lakes 2 day national. The only trials I had ridden previously were a couple of closed to club events. When I changed to the Beta, I just couldn’t understand where to find the grip. I could chuck the bike around anywhere better than anyone, but just couldn’t find the grip. One newspaper article commented back then on me saying “If only Jason could combine his balancing skill with an equal amount of forward motion”. It was true.
I had only been riding a year at the time, I could get up the big steps, balance like a cat, but I would then slide down cambers. Later my throttle control came good, but by then I had left trials. That’s why I enjoyed the indoor events. I was being invited to these. I ended up snapping the Beta Stripey's frame, not on a weld, but through the tubing on the left when it comes down to the pegs. I was practising flicking the bike 180 off walls. It doesn’t do them any good. That poor stripey, I had a flat sided makuni carb on it and heat seized it, took some stick did that bike!!
How had you made a name for yourself to get invited to these events?

I was getting a lot of exposure for someone who wasn’t really getting the results. There would always be pictures of my doing tricks. I remember one of me and Woody in a wheelie with our front wheels touching together. 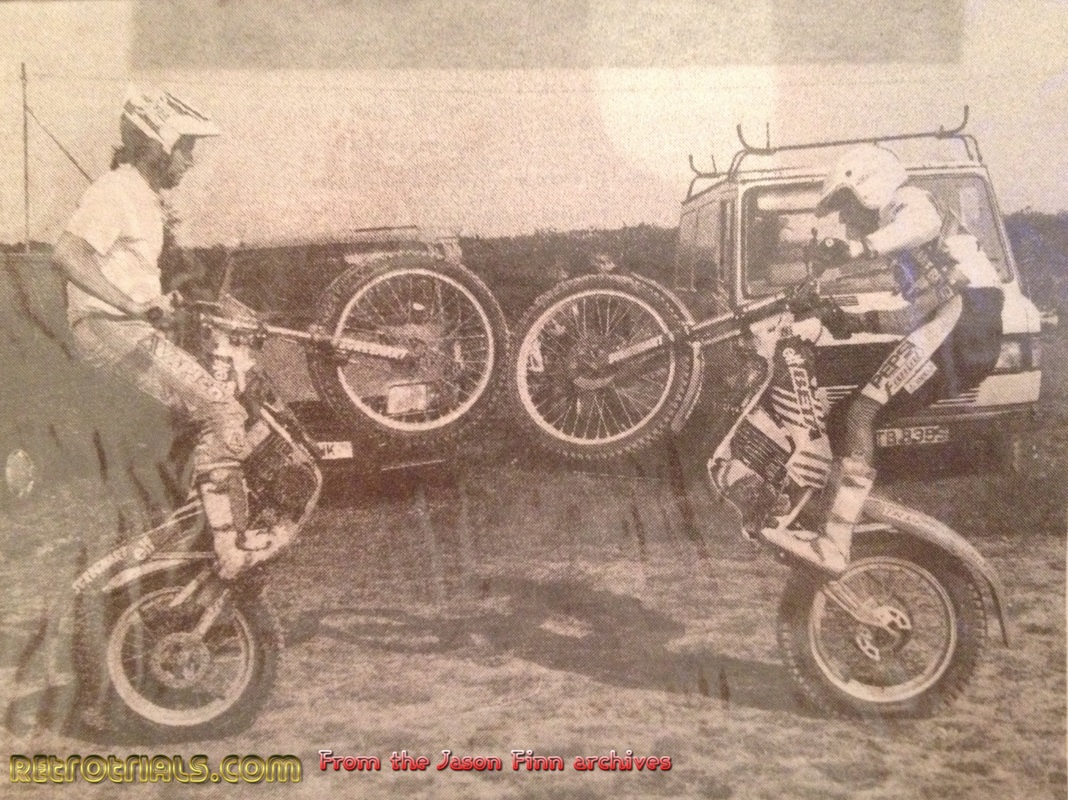 Jason Finn - Trials Freestyler - Exclusive Interview
I earned a couple of names that I wasn't too proud of, "The Carpark Kiddie" !!! I was doing the arena trials and all of a sudden I was getting calls from the organisers of these trials and asked to take part. My riding was more tricks than trial. I remember going out to Dortmund, Germany to ride an indoor competition. The organisers asked me to go out in front of the crowd and do a few tricks before the competition just to warm the crowd up. It was a bad move because I was wearing myself out before the competition. I said yes, I’ll do it but I want something for doing it and they started paying me. This is where it all started. I loved it.
I was riding the Beta zero at this time. Jeeez, I would love to do now what I was doing on that bike then, that felt like a BMX. I threw it about like a rag doll!! I was still buying my bikes at this time, I got a bit of a deal from John Lampkin, but nothing special.
I continued doing these demos and riding the arena trials until about 1993. I was only doing this for 3 years on the Betas. At this time these shows were giving me about one quarter of my yearly income that I earned with my Dad, it wasn’t anything much.
Anyway, I was loving this, riding in front of the crowds. I’m a show off, I admit it. I’m getting paid for doing this. I had also been booked for the odd county show, but nothing major. A guy called Terry Minter, who had contacts at motorcycle news, he also did promotion for events called pro Sports Promotions and asked me if I could do a couple of shows. I said yes. I did a couple and it went absolutely mad......understatment ,Ii went mental. At the time I was riding a Beta Techno, it was Stan Stephens tuned for more power. I need more to get up to speed in short areas.