I started to connect the finished engine with the frame and assembled the painted swing arm together with the rear shock. I was
really looking forward to this moment where I could install the middle exhaust into the bike. It looked so much better as I have
expected. I compared the picture of the real proto with my bike and was really happy to see that there was almost no different this
far. This version of the middle exhaust section must have been replaced back then, because nowadays there are much different
versions fitted on the two existing bikes. If you lock at the picture of the Japan test Proto carefully, you can discern the similarity
to the Beta EVO exhaust system.
The Fork was ready to install and after assembling I could adapt the TR 34 front rim. Only a few changes were necessary to get it
into the right position. The front fender was also taken from the last TR34 model “Stripy”. This blue fender is not available
anymore, so I had to take a white similar looking fender. In the paint shop I mixed that bright blue which is not same as the blue
stripe on the big white frame sticker. The blue was different to the TR of 1988 and looked very shiny on the fender.

﻿ That´s why I pushed a lot more to get as much infos about the two bikes. I can tell you, that these two bikes a very mysterious.

Through many many hours of building my bike, I got a bit tired and I needed to stop for a few weeks.My brain was full with information and I couldn´t go any further, because it was so much more to do on the bike. Things which I really didn´t know if they would be convertible. I really got under pressure, ﻿because I was obsessed of building the best and most exact copy of the Proto ever.﻿
Through the restoration of my TR 34 I got the phone number of Jordi Tarres. I have tried a few times to get in contact with him by sending him mails, but didn´t get any reply. I was a bit disappointed and decided not to write to him mails any more, but a few months later I tried it again and wrote a short whats app message and asked him if I could call him to ask some questions. Around one hour later I got a message of Tarres that I can call him. 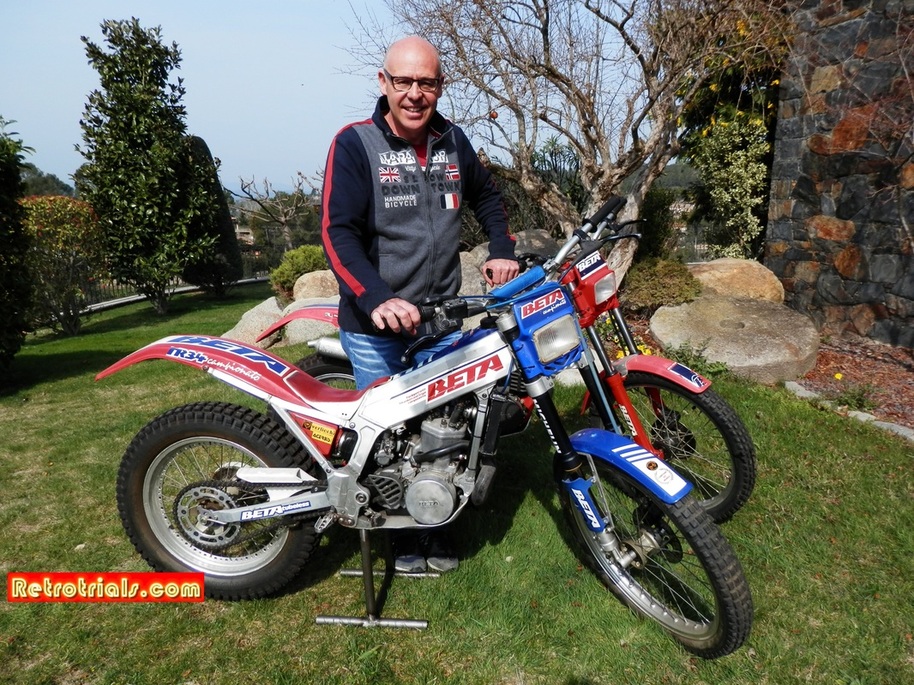 1988 JordiTarres Beta proto replica www.retrotrials.com
I told Jordi that I have found out, that something must have happened to the bike in japan. He asked what? I told him that the Proto pictures from James Browns web site stems from the stay in japan. The exhaust system is very different to the bike he has ridden bevor and that even the fork had been changed into black color. The bike in Jordis house is still the same as the bike which was left in japan. So they should look absolutely same. But they don´t anyway.
Even the screws on the bike in japan were gold, but on Jordis bike at home the srews are looking steel grey. Many little things have been changed. But why and who did it?
Who would replace all the srews and even the exhaust system? On Retrotrials you can see a japanese riders testing the Proto. They took pictures of different angles. 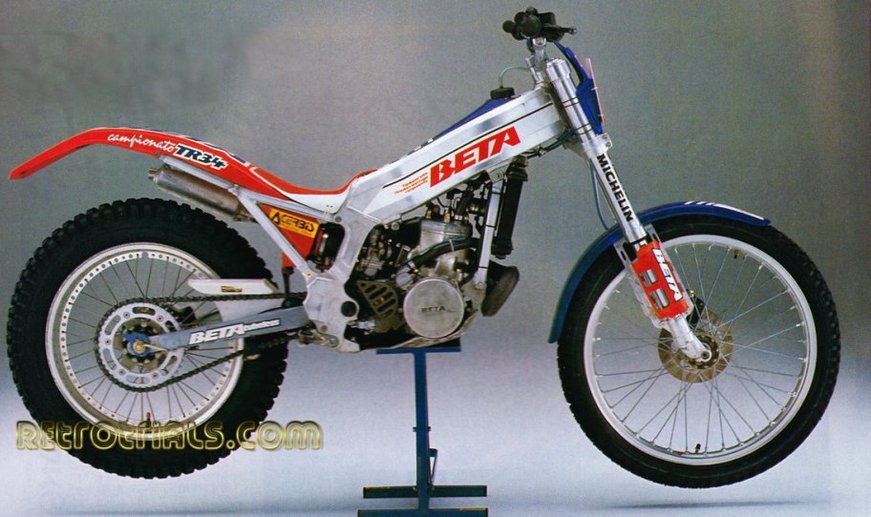 They even dismounted the rear fender to get a view underneath. This bike lookes definitely different.
Jordi had no idea and told me that he didn´t make any modifications on the bike ever. He had no explanations for that and we couldn´t lift the secret about the bike.
Jordi said that I would alwas be welcome to contact him with any questions and he would looking forward to see my replica bike when it´s finished.
At the end I asked him why they didn´t go further with the round barrel Proto bike.
Jordi said the bike was not as powerful as the second bike with the angular cylinder. So they decided not to finish the season of 1989 with the round barrel bike.
A few days later I talked to the german Beta Importer Mr. Schröder. He told me that he would go to the Beta factory in Italy.
If there would be anything he could do for me, I should tell him. I was very astonished about that and also happy to get such a
support.

I gave him a to do list, with everything I would need for Jason Finn´s bike with the round barrel. This bike is displayed in the Beta launch. On this bike, which is the first ever build you can see the aluminum swing arm. I have read many times that Tarres should have used an aluminum swing arm of the later coming out zero. If so, they would have used it on the second bike with the angular cylinder. That would have made more sense. I asked Jordi about the aluminum swing arm, and he said to me that he always used the steel swing arm of the TR34 on every off the two bikes.

Ricardo Bosi is today the manager of the Top Trial Team.
What I have found out is, that the exhaust system on the bike in japan was not made by him. He saw that exhaust the very first first time. I really could see that he was interested in the pictures, but even for him it was 25 years ago. But on the picture of the bike in Jordis home he recognized his exhaust system immediately.
So I left Belgium with the knowledge that the exhaust was really not made by him.  Not much for a trip to Belgium. But anyway, I was right with my inquiries and that was making me confident to get the bike done.
A week later I went to England to stay three days with my friend Jason Finn. The visit was awesome and we talked a lot about everything and for sure about the bike. Also I meet James Brown and a few friends of Jason. I can say that the english people I´ve meet are great. Very kind and I felt always very welcome.
Jason with pals Brynn Matton and Stu brought  Sascha along to Butser Limeworks , the home of the 1988 UK World Trial. Sascha was privileged to ride the Merlin 350 Fuis , but i had to wire the throttle so she would only quarter open because she's such a beast  ;).  I didn't want an international incident should a German be injured on English soil :).
They are crazy with trial and a many of them know a lot of trial. Very different to Germany. May I should live there? Anyway, it was a great experience and I got motivated again to go further with my work on the bike to get the last big step done. The back frame.