Ignacio and Retrotrials walked uphill with the white wall beneath on our right hand side. Then by the low green bush we turned right and climbed the steep rocky bank. This was the area that I had been waiting for. This was the exact section that Sammy Miller had test ridden the prototype Bultaco Sherpa on, back in 1964.

We were now at the rear of San Antontio. 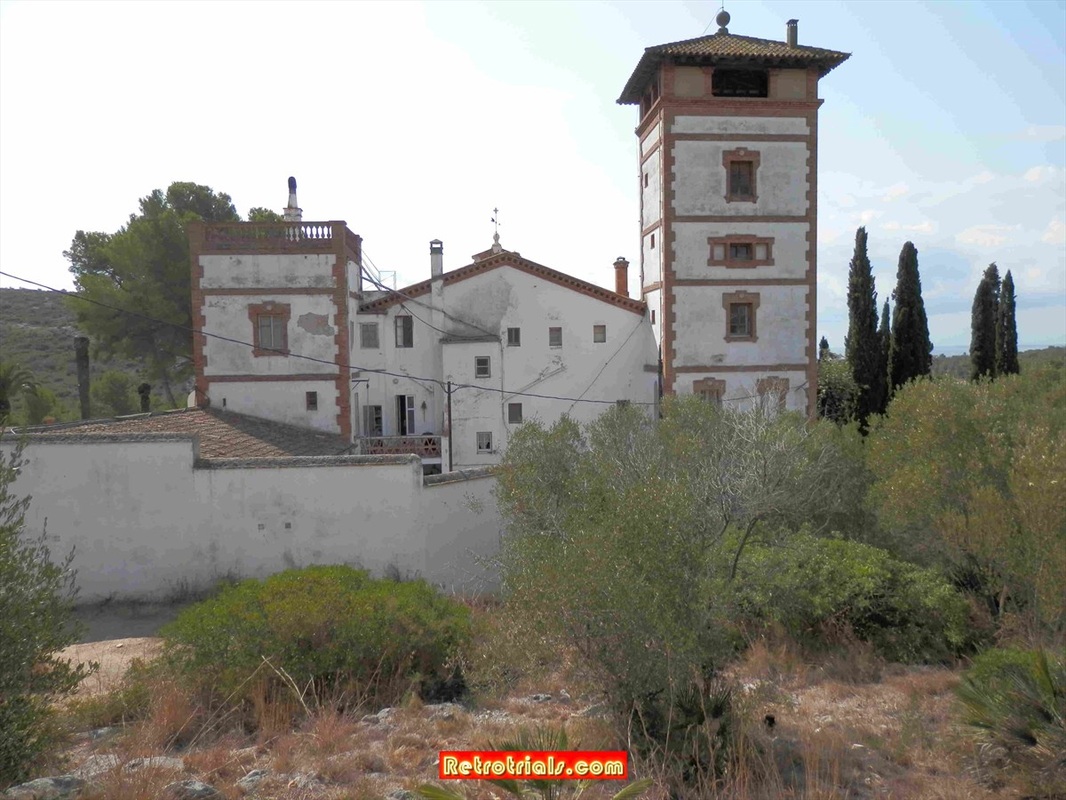 Bultaco - Masia de San Antonio tour WWW.RETROTRIALS.COM
Ignacio explained to us that the tower was built so that his great great grand father, who owned the local railway network, could see his trains pass and check their times to ensure they were on time. It was only when the tower was high enough and they could see the railway line that they stopped building. 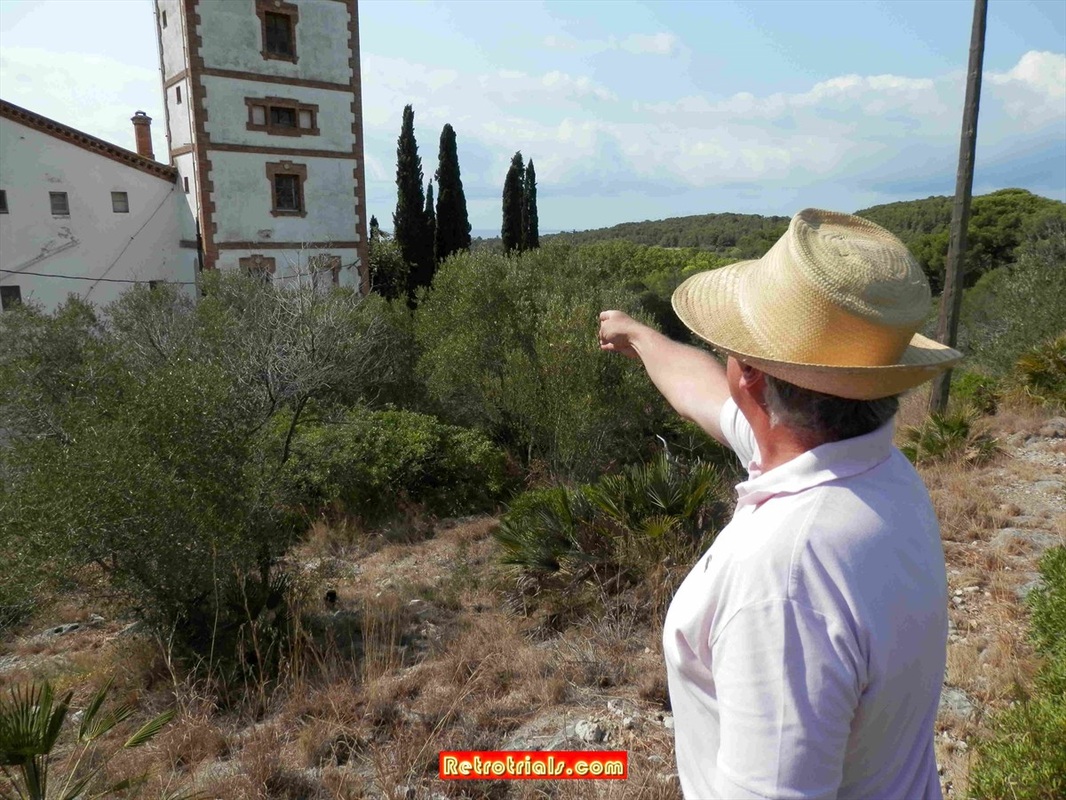 Bultaco - Masia de San Antonio tour WWW.RETROTRIALS.COM
Ignacio then went on to show us the actual section that Sammy Miller rode to compare his Ariel GOV 132 motorcycle against the prototype Bultaco. Sammy would ride this section many times on the Ariel, but he never managed to clean it. He did, however, clean the section on the Bultaco. This was the clinching moment in history that persuaded Sammy to go ahead with the change from Ariel to Bultaco and change trials for ever.

It is a little challenging to see this section on the areas of rocky hillside above San Antonio. I have recalled the section with a red outline exactly as Ignacio remembered. The section is of course overgrown now. Sammy rode the section some 48 years ago ,so you would expect this. Having walked the section carefully I can tell you, it isn't easy. The stings in the tail are the rocks at the end.  There are about 4 or 5 large boulders, each of them big enough to stop you. I can't imagine riding this on Sammy's Ariel. I'm not surprised he didn't clean it on that bike. It would have been difficult enough on the Bultaco. The Sherpa Bultaco was developed over just several days at the farm. Minor adjustments were made under the balcony by the Bultaco mechanics whilst more significant changes were made at the Bultaco factory in Barcelona.

Here is an exert from the Ignacio Bulto interview. I relate exactly to this section and this important moment in time.

Please tell me what you remember of Sammy Miller visiting San Antonio?

"I was there as my father was very enthusiastic as my father loved to talk with his sons and daughters about his work, because for him it was altogether as he grouped the whole thing together. I had a lot of talks with my father and at the time we were living at San Antonio as it was summer holidays. My father was going to Bultaco factory and coming back and I remember one day he come and say tomorrow we are having here Sammy Miller. I knew him as my father had described to motorcycle news. I didn’t know what the text was, then I didn’t speak nothing English. There were a lot of photographs and  I was just looking and the middle photograph was Sammy Miller and he had a big concentration in the paper on him. My father told me Sammy was coming and at the time my father was very passionate about the off road. He had four of them and had a KSS Velocette and with that KSS he had a lot of rally's out on the road on the dirt with friends and he went to Aragon and the Pyrenees. He loved to go off the road with the bike and at the time, in San Antonio he had prepared some special bikes for trials with Bultaco engines and they were the ancestors to the Sherpa. At this time I was getting bigger as I had been riding trials and was aged 13 or so. My bike was 175 cc engine and the bike was holding pretty well at the time. My cousins were staying with us many times during summer in Antonio, they had 250 bikes, not really Sherpas, but something that was starting to figure out and look a little bit like a Sherpa .Sammy Miller he come to San Antonio with another rider. He had something on his face. His name was Roy Peplow. I don’t know, it was a mark or a burn on his face. I was young and was fixed on this. Roy and Sammy took out our bikes as my father wanted to convince Sammy to come here and prepare bikes to win the trials in England as at the times the trial in England was very healthy. There is the Scott Trial and Scottish Six Days Trial and many other very famous trial. Sammy and Roy stay in San Antonio, I think I remember, Sammy come in summer for a couple of days and spend them in San Antonio. He was testing the bikes at San Antonio. I remember he was doing some things very scary for us and very difficult and we were looking at Sammy and Roy. Roy was very hectic and Sammy was a real champion. You could see this when they were riding. After that Sammy talked to my father, they are pretty good training bikes but were a bit unstable. My father say Sammy is contract, do you think you are able to develop a bike to win trials. Sammy say to my father in reverse. “If you are going to be able to do a bike that suits my trials riding I will sign for you to ride your bike. It was like this. After this, in November the same year Sammy come to the factory. My father had telephoned him and arranged this when he had a prepared bike for him. Sammy said “Ok Mr Bulto, very good”. My father called back Sammy and Sammy come to San Adrian and testing for the Sherpa was in San Antonio and he tested it in San Adrian at the factory. Sammy then come with the bike to San Anontio with a team from the factory. I was too young to say anything, I was just looking. I was able to ride a trial bike but I was nothing to do with Sammy, he was a real professional and just looking. Sammy was testing and saying “that is not enough, that is not enough”. I remember in the night they take the bike to San Adrian and they work on the bike and the next day they come to San Antonio.The next time you come and see me I will show you. Sammy mark a non stop called the rocky section he say to father “ if I cannot get through on my Ariel and I go through on the Sherpa I will sign with you and it was true. With the Ariel it was impossible to go through and he really intended this and try it to the maximum with the Ariel and with the Sherpa he just went around, no problem. The great achievement of Sammy was to ask the technical team for the right things and to put the level where it was neccessary. He didn’t say the head angle had to be 30 degrees or 26, no, he say, this bike doesn’t turn what I want. I want a lighter steering and the technicians would think of this
and make the changes. These technicians were from the factory and my father had been there.

Here is that section.


With Ignacio's knowledge I made an audio recording of my visit there so that I could remember all of the detail.
When I am writing here, all of the detail is from Ignacio, because I want this to be a good record, that's all and he knows this place, I do not  :) 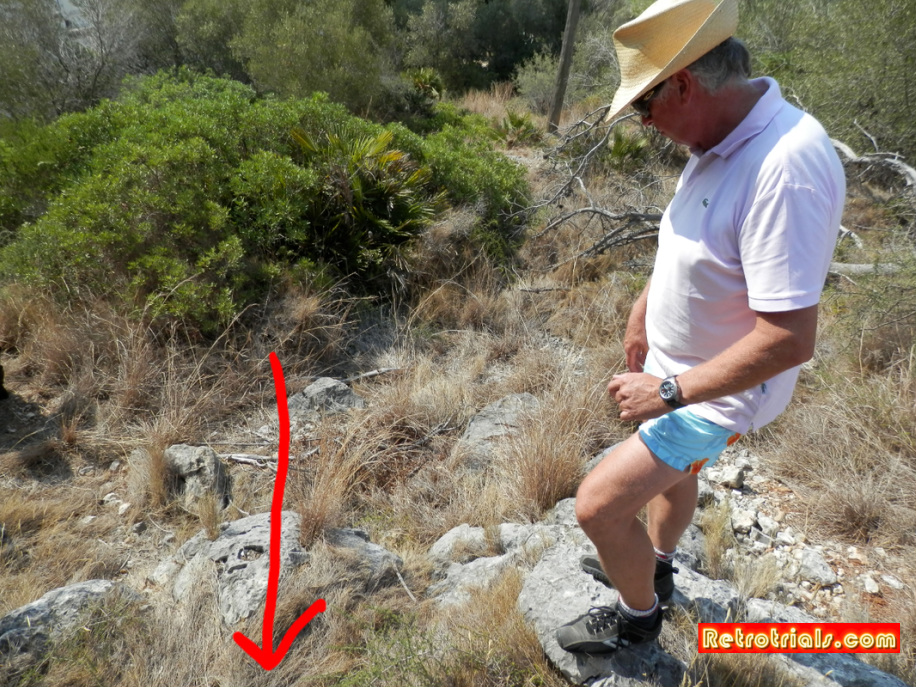 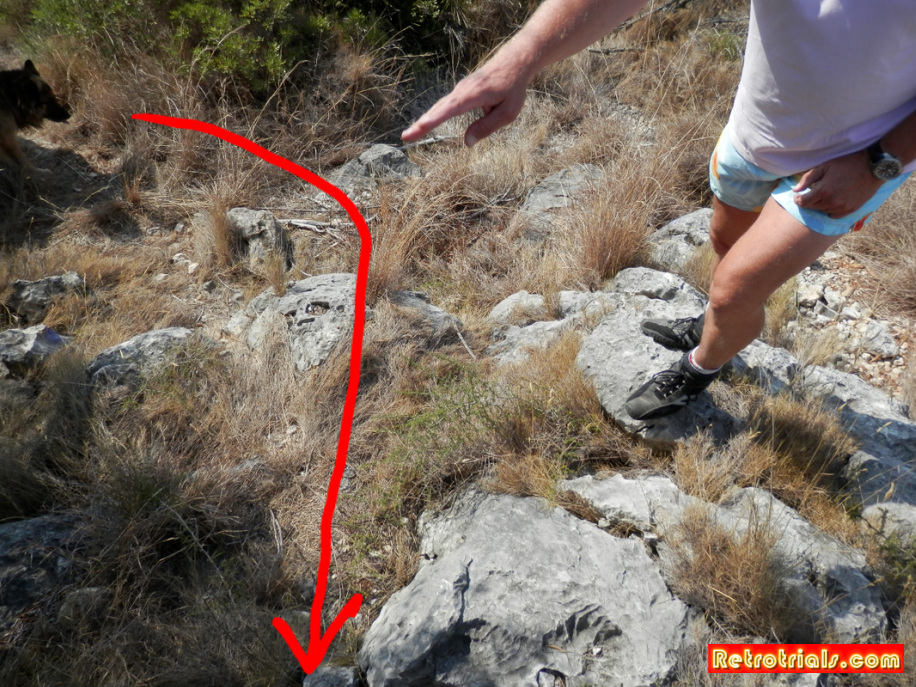 Bultaco - Masia de San Antonio tour WWW.RETROTRIALS.COM
Of course it is a little over grown now and the tree would not have been lying down then. 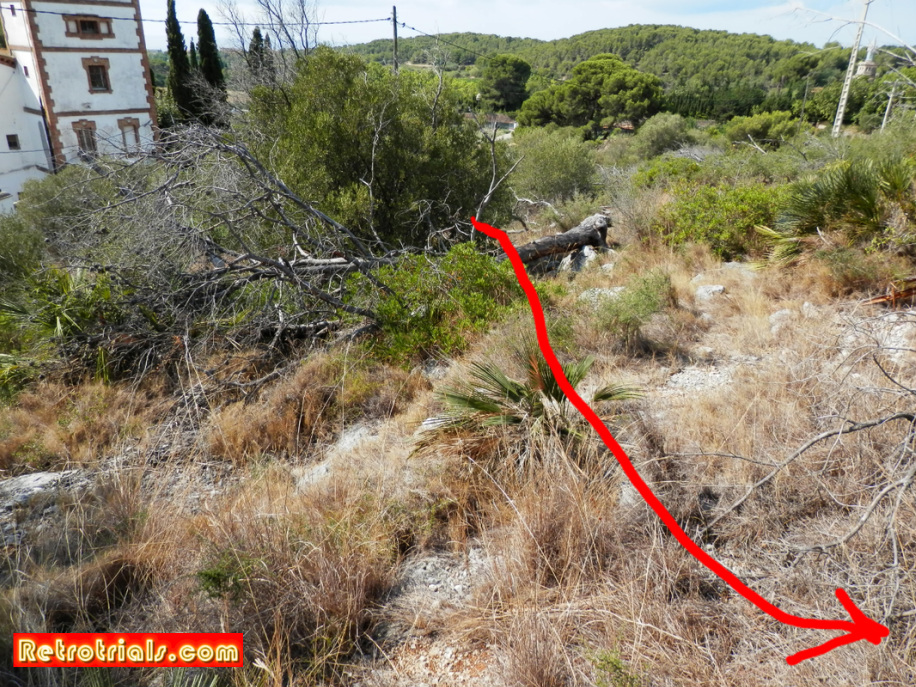 Bultaco - Masia de San Antonio tour WWW.RETROTRIALS.COM
Sammy used the section to compare his Ariel with the Sherpa prototype that he was developing continually throughout the days at San Antonio, with a team of Bultaco mechanics present with them. Sammy called this the "Rocky section". The section was also used in the San Antonio trial every year and was of course "no stop". At the end of the trials here this section was easy but at the beginning it was almost impossible to get the Ariel over these rocks. He could not clean this with the Ariel but could clean it on the Bultaco. Even now this is not an easy section. Looking at this, I know it would be hard to clean first time.
This was the actual section that convinced Sammy Miller to ride Bultaco. Without Sammy's involvement it is fairly likely that Bultaco trials machines would not have reached as many people and been as popular.

Bultaco - Masia de San Antonio tour WWW.RETROTRIALS.COM
After Sammy Miller had finished racing, the family used this area to tune and modify the bikes and improve them. Speaking about the section I explained to Ignacio that my technique would be to engage first gear and lean back and attack it fast. He said no no you have to go slow over the rocks and when you turn sharp right at the end on the gravel this was the main problem for the Sherpa. For the Ariel the length of the bike exactly fits between the rocks causing the bike to stop immediately. With the Sherpa you could lift the front wheel, not the Ariel. 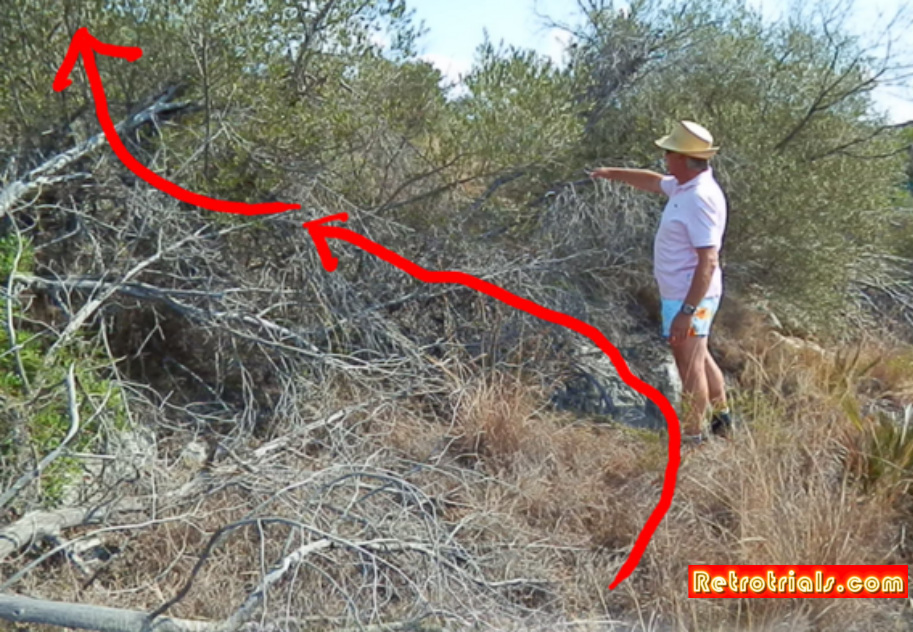 Bultaco - Masia de San Antonio tour WWW.RETROTRIALS.COM
This is the sting in the section's tail. The sweeping left hand turn is over several large rocks, that would sump most bikes out. Ignacio said that both wheels would sit in the gaps between the rocks and stop the bike dead. After the rocks there was a sharp turn right off camber of loose gravel.

Iv'e seen it , it's not easy, let alone on an Ariel or Bultaco. 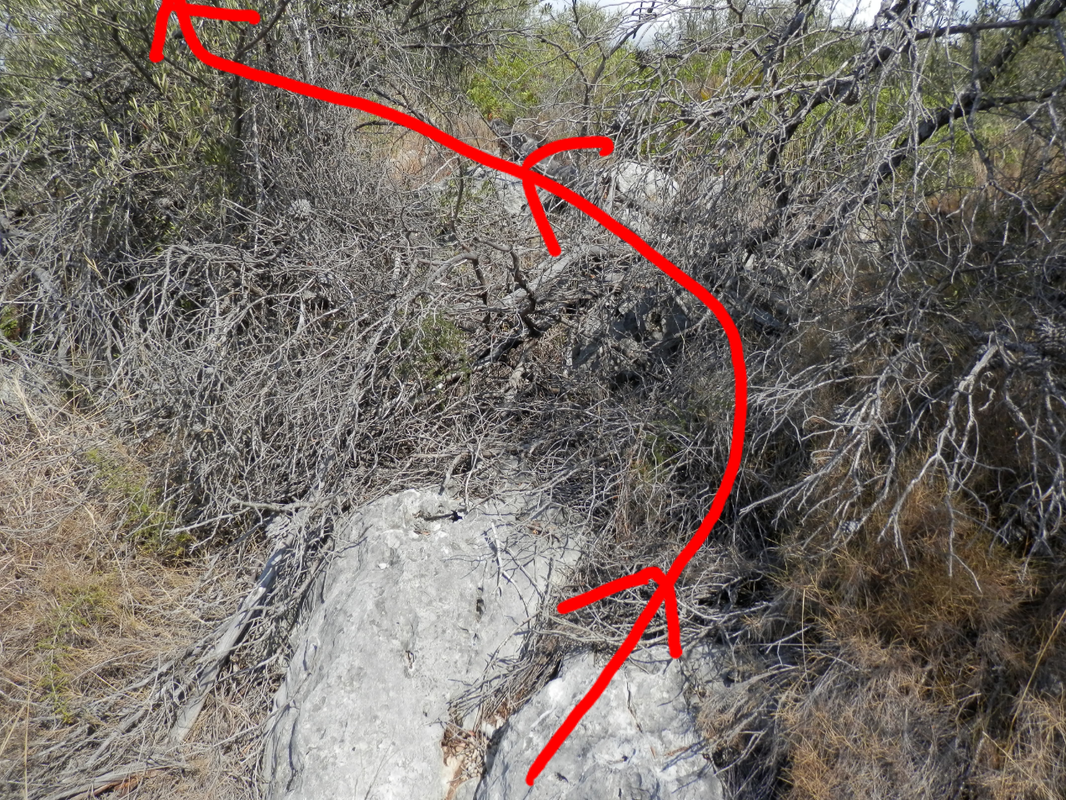 Bultaco - Masia de San Antonio tour WWW.RETROTRIALS.COM
Behind me is the house and the balcony, which you will see. It was under this balcony that the Bultaco mechanics made the adjustments and modifications to Sammy's prototype over the few days of the legendary testing here.

I suggested, joking of course, that Ignacio should forget about the camp for the younger boys and get the older boys on their bikes here to ride. He said that this cannot happen as they do now know these people. Usually they are very good people but sometimes there is a crazy one.

This was the section and this was the area where the Bultaco and later the Merlin was tested. Although Eddy Lejeune never visited San Antonio, Juan Freixas visited here many times to test the Merlin as he was their first rider and worked for them throughout the length of the company. Gabino Renales also visited here as a Merlin rider in 1983 and Pascal Couturier.

Ignacio tells me that there was a journalist called Bernard Osbourne who wrote for Motorcycle News.You might remember him . When the Sherpa started Bernard wrote an article asking whether the Sherpas that were going so well in the trials stay together in the Scottish Six Days Trial. My father read the article and telephone Mr Osborne and say "Please Mr Osbourne, please can you come with me, we will have a rally around and we will test the bikes". He came to San Antonio and he test the bikes. They go for a long rally ride on this type of ground. When they had finished Bernard was almost exhausted and he say "Mr Bulto, I think the Bultacos will hold together perfectly". ha ha ha .