You were a couple of years younger than Jommi, at what age did you start beating your father and brother at trials?

6 and a half ha ha ha. We had pretty good, kind of …you could say destiny. My older brother started first and got the bike almost at the same time and then our neighbour boy, kid was two years older than me and 2 years younger than my brother basically. He got himself a bike so we would ride all the time at our place and then we had woods pretty close to where we lived and we would just take our bike across the street and so after school we would ride near all of the time and of course my neighbour wanted to beat my brother being a little bit younger and having a smaller bike, me being the youngest and having the smallest bike I wanted to beat both of them. Well my brother rode a couple of World Rounds and he finished I think 4th in the Finnish Championship one year. My neighbour, he became Finnish Champion and I think at least once scored a couple of World Round points and then me becoming World Champion. I think there is a little rivalry between each other. It was pretty cool and that’s how we started. I started to be a lot better at 12 or 13 because my neighbour at this time had a TY 250 and I was riding a little 50cc Fantic and I could almost ride,  basically the same sections where power didn’t matter then much.
Did you enjoy school?

Not that much but I stilI went to High School. I was never big at school. I took it as work. I was a really good student and I listened really carefully when I was at school and did everything, but I thought hell my father doesn’t bring any work home so why should I ha ha. Homework was a big deal for me, I didn’t like to do that and I remember one of the happiest days was when I finished my school and walked out of that gate and thought I never have to step in that property any more. I did go to High School. It was a special High School for athletes so I could travel because at that time we started to go to Spain for practicing and competitions so I could not be at High School all year.So with that school I could take few months off from school and travel and then study hard when I went back to school. I was still in school until I was 4th in the World, back in 90 or close to that.

What would you have done, if you hadn’t made it in trials?

Porn star ha ha ha ha ha. Its’ kind of the same thing as with my lack of heroes. I never really had thought of any profession or anything. I didn’t really know what I was going to do. I think I was pretty determined on trials from an early age and my parents never pushed me but they never stopped me either and we rode all of the time. I guess it was kind of natural. I remember a conversation when I was 15 with my parents, my brother and the whole family. They said it looks that I have some promise and could do pretty good in trials, should I go ahead with the working and the studying career or do you want to see how you can do at trial. We said let’s try the trials. My father said also that school won’t go anywhere. It will be there in 5 years, it will be there in 10 years but we have to do this now if we want to do it. This was the point where we decide what to do and to shoot for the World rounds too. Until then I never really had to think “what will I do” and then we just decided to go with the trials. I never really had any dream profession. We always had the idea that trials had to be fun and it’s always been a family fun sport for us and it pretty much stayed like that for us up until this day it’s still the same way.
Tommi was encouraged to work on his motorcycle himself, not break it and expect Dad to put it back together :)
Have you always been a pretty good mechanic?

Yes, I know my stuff and my father told me how to work on the bike.  I pretty much  always had to fix my own stuff and wash and mend my own bikes. Nobody ever did anything for me so I guess that was good. We wanted to keep our bikes spotless, every thing clean so we washed our bikes after every race and practice ,polished it and made it look good. Of course it would have scratches and all that stuff on it still……I can do pretty much all of my own stuff myself.
Marja- Leena, Tommi's mother took most of these photos. This one if particularly good of Tommi working on the first machine he rode in competition, his Tunturi 50cc.
Did you ever have a road bike or a motocross or Enduro bike?

Not when I was a kid ,but later i did. When I was in Aprilia, I got one enduro bike from them, a 125 Aprilia. Back when I was a kid, the bike we had did have a seat and in winter time in the winter snow we would ride like an enduro here when you couln´t do the trials, but I’ve only entered a couple of enduro events. I don’t really like riding on the street, its way too dangerous I think, no matter how good you are you always become looser if somebody hits you. I only ever rode a road bike once or twice that’s it.
Tommi rides the 125cc Enduro bike presented by Aprilia up his home driveway. A Scooter, another gift from Aprilia.
What was your first major break? Who actually spotted you and thought he has a future?

If you could explain both , that would be superb?

Well, nationally pretty much everyone saw when I was 7 or 8 the determination and I was way ahead of my age group and all the other kids that were there. I started riding right away when I was 10 and started winning the races against 12 and 13 year old riders and then of course everyone knew, back in 86 and 88 we had 2 World Rounds here in Finland and my father was the Clerk of the Course and the trials manager and he built all of the sections. My mother was the Secretary so we were really involved at the World Round that we organised here and me being 14 I actually test all of the World Round sections apart from 2 sections of the 86 World Round because we didn’t have anyone else here who would test ride them. My father made me do it so that I could ride and push myself at World Round sections. I was 14 on my little 50cc and actually if you wanna hear, what I think is a funny story. My father was always a head of his time and he always like to think new ideas and bring the trials into the public eye. We had the starting of that World Trial at the motocross circuit and back then like it is nowadays you have the start then you ride 5 miles and the spectators never see the riders. They come to the starting area and then the riders just disappear. Well my father built the first indoor section, just some concrete pipes and stuff like that on the motocross track. Well for all of the top riders it was kind of unheard of back then. All of the top riders complained of how dangerous it was and it was not possible and they didn’t want injury.
The top riders questioned the "dangerous" arena section at the start of the trial, until a 14 year old Tommi rode it. 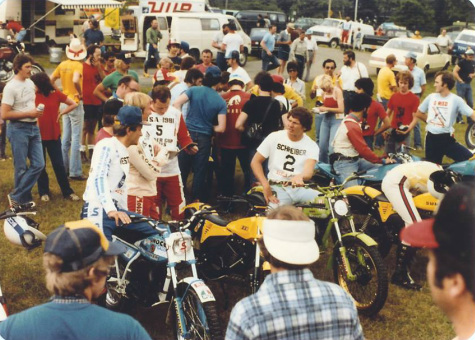 2013 Tommi Ahvala Interview WWW.RETROTRIALS.COM. Photo by Matt Liberatore
It just showed also …..there are a couple of funny stories actually ……of course there were the rocks where I practised three times a week and I know every rock with my eyes closed and I remember Schreiber and Burgat, they were still in the top 10 or the top 15 riders and they were just practising the one section that happened to be exactly the same that I laid out there. They couldn’t do it, me being shy I didn’t go there when they were riding but they stopped there for a second ,  I started my bike and rode it and cleaned it right away on my little 50cc Beta ha ha ha.You should have seen how mad they got because they kept trying to ride it but couldn’t do it and make the sections once. They fived it all the time. ha ha ha. Here comes just some kid who cleans it straight away on a 50cc Beta. That was a pretty tricked up bike, we put a bigger carburettor on it and bored out the cylinder. It didn’t have any lower or bottom end but it had a lot of top end so basically I just ride with it throttle wide open all of the time and just used the clutch  so probably that why my clutch control has always been pretty good because I rode that 50cc for many many years. Until I was 16 actually,It was all clutch and the throttle was just wide open all of the time.
Tommi with a great riding position, aged 16 on his 50cc Beta.