Where were you born?

Do you have any brothers or sisters?

I have 2 sisters, younger than me.

Was you family involved in trials or trialsin?

No, but because I came from Sant Feliu, it’s the place where the 3 days of singles is held and we look at trials every year and actually with a couple of friends we start making bicycle trials because we want have motorcycle. This is where everything goes on.

I like school, but I didn’t like the teachers. Some teaches especially, when I start the second year were not good and they didn’t bring me or teach me the value that they teach now, so I didn’t teach very much.

Please can you explain about these values?

Everything was a little, how can I say. I was raised to have the values of honesty, fort, sacrifice and I didn’t realise that with some teachers this was not the point and you just had to do what they want even if the calculation was correct, because it wasn’t made the way they like it you get preached, you know.


What age did you leave school?

Yes, straight into bicycles
.
Did you at a later time in your life go to college of university?

Were your exam results ok at school?

Yes, yes, until the last year everything was fine.

What happened in the last year?

I made some bad teachers and it was a difficult situation. My father was ill, my father has a construction company so I can see that my family was suffering and I did not have the head on school. I was concentrating on riding and having a lot of work and luckily I meet Pedro Pi who became my second father at 13 and he takes care of me until I was 18.
6 times Spanish Motocross and Trials Champion Pere Pi worked for Montesa for 25 years where he was a test rider and manager. In the late 70's he started and organised Trialsin in Spain . His son Ot Pi is a multiple World champion at cycle trials.
How old was Ot Pi then?

Ot was 6 or 7.
Both photos here show the experienced and now successful Codina coaching a young Ot Pi.
Was you mother involved in your trials at all?

Well, when my father die, my mother was only 38 and she doesn’t have driving licence so she makes a big effort to make a driving licence to take me to the trials and I still remember one trial in a lot that we were driving very early in the morning and we have a crash and she was very nervous. I appreciate the efforts my mother made for me.

What was your first bike?

Cota 200. The story come that when I was 8, I asked my father for a trial bike, a cota 49 and my father says to me “If you come to work for me all of the summer when you will be 14, I will buy you a Cota 49”. So I come to work all summer and I was riding bicycle all the time and I worked for my father doing everything he wanted me to and my father does this when I am 14. My first contract with Montesa was 25,000 a month and one cota 200, so god bring me my father’s bike.

This confused me a little bit because I thought you were riding trialsin and then went onto the motorcycle?

Yes, I was riding trialsin but my first contract was a motorcycle because my real belief and target was to be a motorcycle rider not bicycle rider. For me the bicycle was just a something that I did because I no have a motorcycle.
But how did you get a contract with Montesa at such an early age?

Because Montesa decides to build bicycles and I was the champion at this, like at 14 and I get involved with them and I have to go 2 times a week to Montesa in Barcelona. So from Sant Feliu I have to take myself and the bike on the bus for 1 hour then I stop in the petrol station, 18 stops of metro with the bicycle and then 2km of riding the bicycle to Montesa. I stay there all day and my passion was going to the competition department and I stay all day, that’s where I meet Manuel, Coultart, Vesterinan, all the guys.
Andreu Codina was the star of Montesita , the cycle arm of Montesa motorcycles.

Before you move , take a few minutes to view this professionally produced Montesita video about Andreu Codina. It speaks a thousand words. Its an excellent and  very revealing video - one of the best ive seen in a long long time as it really projects not just the riding and the skill but the tricks , the bikes , the riders and the era and the innocence of it all.
It sounds as though the music was plucked from Disney :)
When they go to practice I speak with the mechanics. I was a real child and the mechanics take me as the guy who is there for “go and get these parts” so I was happy to do this. I was the real kid of this company, yes. Then everything there as a practise, I was the reason I just going to help with Manuel or Gorto and the other riders and when they stopped riding I start to take their bikes and ride a little bit and I learn very quickly.

How old when started riding trialsin?

Where was your first trialsin?

In Sant Feliu. We make a trial, every Saturday. There was a group of 11 or 12 friend and one of us has to organise this one event so it was like a small little club and this Saturday when you organise you cannot ride and have to put everything in place, because you have to practise the route.
Was your first trialsin bike?

Actually, it was a prototype built from a BH road frame and we have a little shop, a little motorcycle shop in Sant Feliu that is called motos Figueras and he actually was preparing the bikes for us.

Because I get a contract. Actually it was going one step up as well. My father die when I am 14 and I have a contract when it is just 6 months before.

So the contract that you had with Montesa involved you getting money and a motorcycle as well?

Yes, it was not to ride the moto, just for me as a present. Actually I didn’t get my first job as a motorcycle, because I was good on the practise Gorgot offered me to come with him for the first events of the World Championship of 1983 as a minder and you know in the past the minders were bringing the tools but there was also one rider doing the section before you so that you could see, try third gear. I was doing that for Gorgot. Many of the sections I was doing better than him, ha ha. So the guys from Montesa start to let me ride alone. The first year I ride I was never junior, the first year I ride the top class in the Spanish Championship 1983, I was 4th.

Did you prefer trialsin or did your prefer riding the moto?

Motorcycle was my aim, bicycle was just because I was not able to ride.

Looking back on it now do you have more warm memories of the trialsin or the moto days? 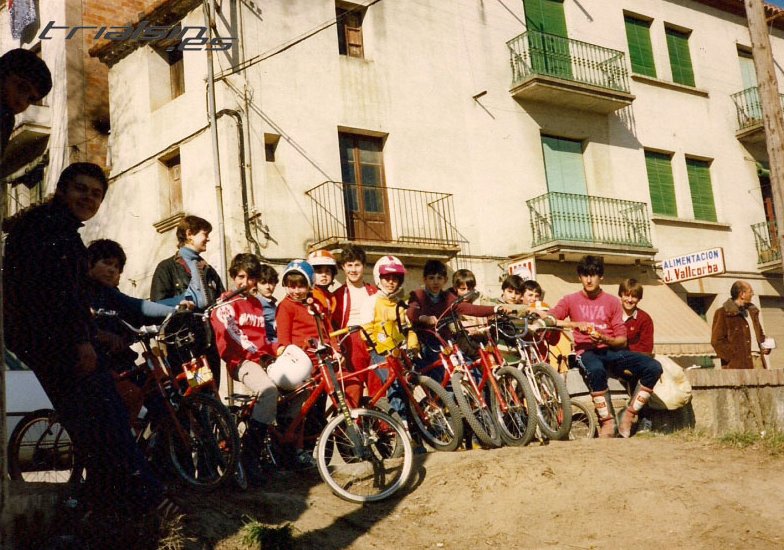 2013 Andreu Codina Interview WWW.RETROTRIALS.COM
Why were you one of the pioneers of trialsin? Was it not an established sport at the time?

With your relationship with Pere Pi did you help to develop the monty?

Not the monty, the Montesa. When Pedro left Montesa I was already a motorcycle rider.

When you were riding for Montesita did you help to develop that bike?

What do you remember improving on that bike? 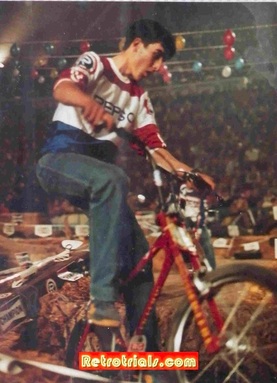 Who were your contempories that you rode with at the time when you were riding trialsin?

Did you ride with Hans Rey?

Who was the most talented rider of your generation of  trialsin?

I think Jordi was very good.
Did you ride nationally at trialsin?

Where about in the world was the sport most popular?

Who did you practice trialsin with?

With my local friends.

Did you come over and see the Sandifords in the UK? 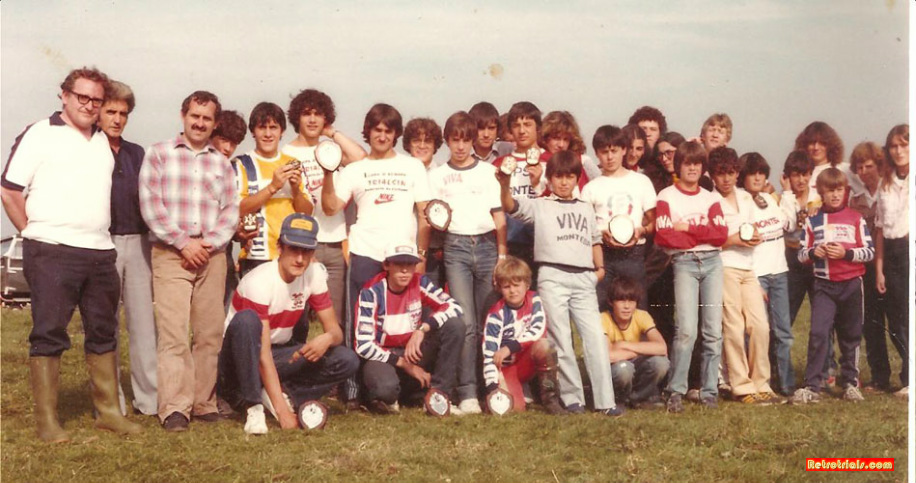 Andreu Codina , Jordi Tarres and Ot Pi on the European tour come to England. The competition is hosted by organisers the Sandifords. Jim can be seen on the left in the chequered shirt. Martin is kneeling down at the front WWW.RETROTRIALS.COM Photo Ot Pi
The trialsin days, I remember it was like a family sport but it was for me the most nice thing was that all the riders are very new that make trialsin. After they become older they are all good persons and good in their job. The mentality of trialsin it educates them to be good in life.

How old when left trialsin?

Was the transition from trialsin to moto easy for you?
Oh yes. It was very easy and quickly. I could hop the bike easy as well, no problem. It was like a dream come true, you know.