The picture below is of Andreu riding in the Montesa factory 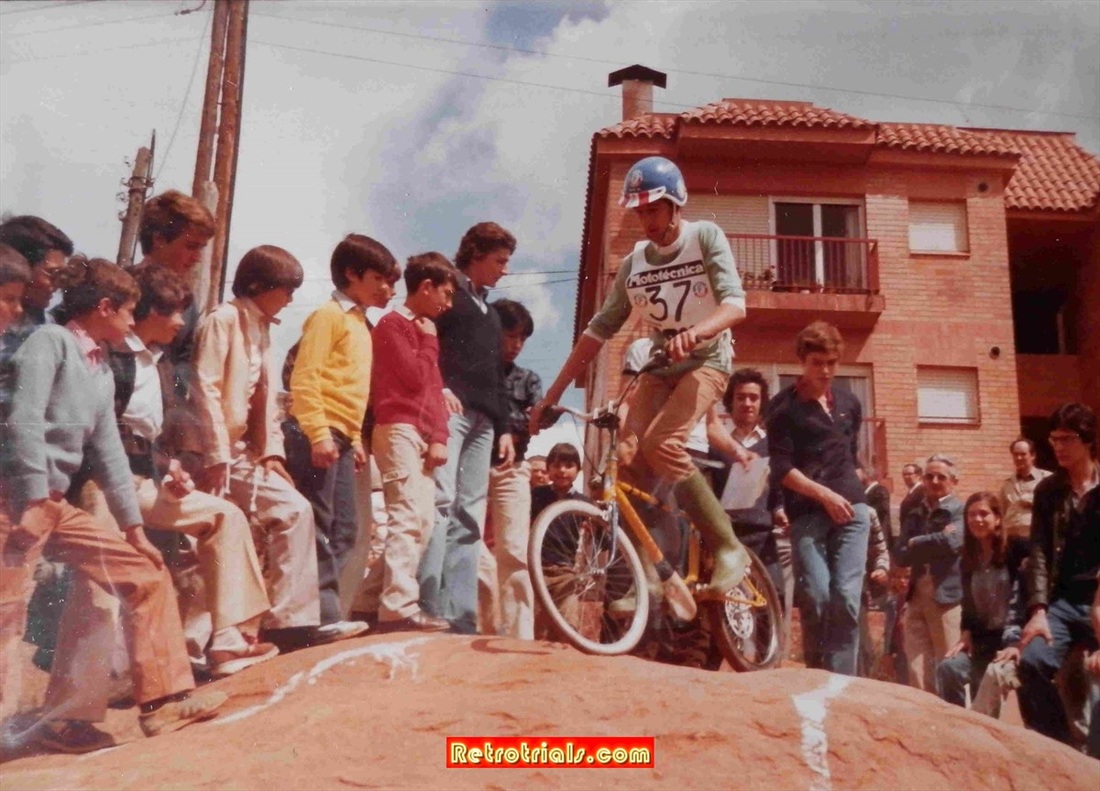 2013 Andreu Codina Interview WWW.RETROTRIALS.COM
I heard a story about you hopping a motorcycle on the front wheel, did you do that?

Yes, yes. It was a cota 242 in 1983. There are many techniques that we did in trialsin that made it easy to do on moto. Many of them I could not use in the race but many others yes and we changed the way the trials was. The clutch was almost never used and we start using the clutch. We start having and making a lighter bikes and the suspension we wanted was quicker. In the past the suspension was slow in action. I think Lejeune and myself make the change.

Did you ride Bultaco or Derbi  trialsin as well at any time?

No, no. I have been loyal to my brands and I stay with Figueras then Montesita and Montesa for many years until the factory closes and I switch to Gasgas and I stop with Gasgas after being sales manager for being another. Gasgas for me was  from 1987 to 1998.

When you travelled around the world with trialsin, did you travel with Pedro Pi?

Yes, and sometimes Pedro organise for me to go alone. One of the things that I have to appreciate Pedro is that he encouraged me to learn alone and go alone and I remember that one time I am told that I can do 4 demos. I am asked to do 4 demonstrations in France on the coast of France with Jon Per Goy. He was doing with the Fantic and I was doing with the bicycle. He organise for me the tickets for me to go on the train. We go to the train station in Barcelona and they say no bicycles are allowed on the train arggghhh. So Pedro goes to the men of the station and they say n, then Pedro waits for the last second the doors close and when the doors were closing he just encourage me on and say “no one will take you off from here, go”.

Did he catch the next train?

No no no, I was going alone. I was 13 or 14. Actually I get paid 75,000 pesetas for this demonstration which was quite a bit of money and the shows were Perpignan, San Tropez and Leon and another. Then from Leon I have to fly to Barcelona. This was my first time flying, I missed the plane and I have to spend the 75,000 pesetas to get a plane from Leon to Paris and Paris to Barcelona ha ha ha all gone ha ha.

That must have been scary for a 13 year old without your dad? There are a lot of kids that wouldn’t do that?

They were different times, but you learn a lot but I never have any problems. I just have bog suitcases for the bike. At this time there were no mobile phones, nothing so, no computers.

What can you remember of your days as a motorcycle trials rider for Montesa?

From one side it as very nice because I have an opportunity to become a trial professional but on the other side today I see that I look back and I can see that I lost a bit of my momentum because the factory has many many problems, financial problems. I have no spare parts and I have to ride one season with 2 fenders and almost no spares parts. The bike was not progressing at all for 3 years and it was the time when monoshock was coming, lighter bikes were coming.
Yamaha TY was there and because I was loyal to Montesa, I think I lost momentum. I think that when I switched to Gasgas it was a good moment but I lost 2 or 3 years. I had been going alone with no mechanic, no minder, nothing. One time I have no money in Finland and I have to sleep on the basket ball pavilion and to get some food I have to get into the supermarket, eat in the supermarket and then go out. ha ha ha. Just because the money was no there. His was when I was 20, 21 or 22 around this time. I look back and I think there were not every good years. I then switch to Gasgas.

Which trials were you riding at this time?

I was riding the World Trials and actually I understand that there was a problem with the factory. I have nothing to say they were bad to me. It was just the situation but for me it creates a problem as a rider it stopped my progression.
How many bikes did you ride when you rode for Montesa?

I ride initially the Montesa Cota 200, then I go straight to Cota 242 then we went to the Cota 330, the prototype, the early prototype. Then we switch back to the first monoshock the 304 and then the 307.

One story I can remember from the Montesa days. I went to Myslenice in Poland  for the Trials des Nation and it was really scary as when you cross the border it takes about 8 hours and it was very very dark serious and when you go to the restaurants they almost have no food it was really really complicated. The first year as really complicated then you discover that there was a black market and you can have everything, you can change the dollar on the black market and you are the king.
The first year was really really difficult and in one of the practise my handlebar broken and I went to the van to change it, there was one guy who bring me beers and I wonder why he bring me beers. I say to him “Why do you bring me beers?” and the guy say ”, I would like to have your handle bars” . I say that it is broken and he say that it is no problem and that he will weld it and have it one his bike. So …we became friends and he was helping me discover the good places to eat to find good exchange rate on the black market, 6 times more than the bank, so we were going to the best restaurants after that and had lots of money.
I remember to go to the hotel in Krocovia because it was now very cheap because of the exchange rate and we say ok I will love to have a chocolate and the guy in the reception just opened the door and say “what do you want”. If you have dollars you have everything. So, so they help us a lot and one day they explain that they cannot leave the country unless they have an invitation from a person in another country, so at this time I was working for Montesa, but then I keep in touch with them through the years, so it was 4 or 5 years after and I now work for Gasgas and I remember I send a letter to them inviting them in 1989 or 1990. So they come to Girona and they fly to California and they are living in America now, where they have a supermarket.
Did you arrange private sponsorship yourself or was it through the company?

I arranged all of it myself.
In the photos below Andreu is staring on stage in an adertisement for Super Choc ice cream
How did he get involved with Gasgas?

With Gasgas it was me, I say to myself it is not possible to continue like this with Montesa. The last year I rode with Montesa I have no spare parts, it was very very difficult. I was making more money out of the Indoor Trials and the school because of the situation. One a little money come from Montesa. Most from these other things. The last year I was paid with Impala bikes, they have no money and they pay me with 6 Impala bikes and I have to sell.
All this help you to develop your business sense so I decide myself to change to Gasgas because I like Paxau and I like his bike and I think there is a bright future with this company and I decide to just move there for the first year for free. I get a friend form Ibiza who says to me I am going to pay you for the season of riding that’s why I have the white clothing with Ibiza on it.
Andreu has kept the KM.2 Ibiza - "Garden in the see Trials shirt" 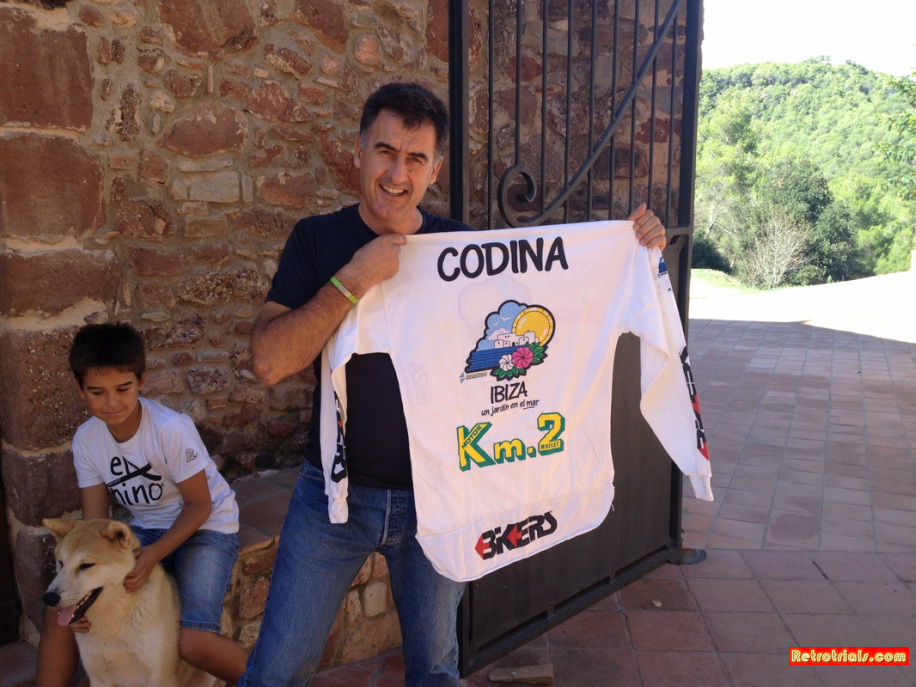 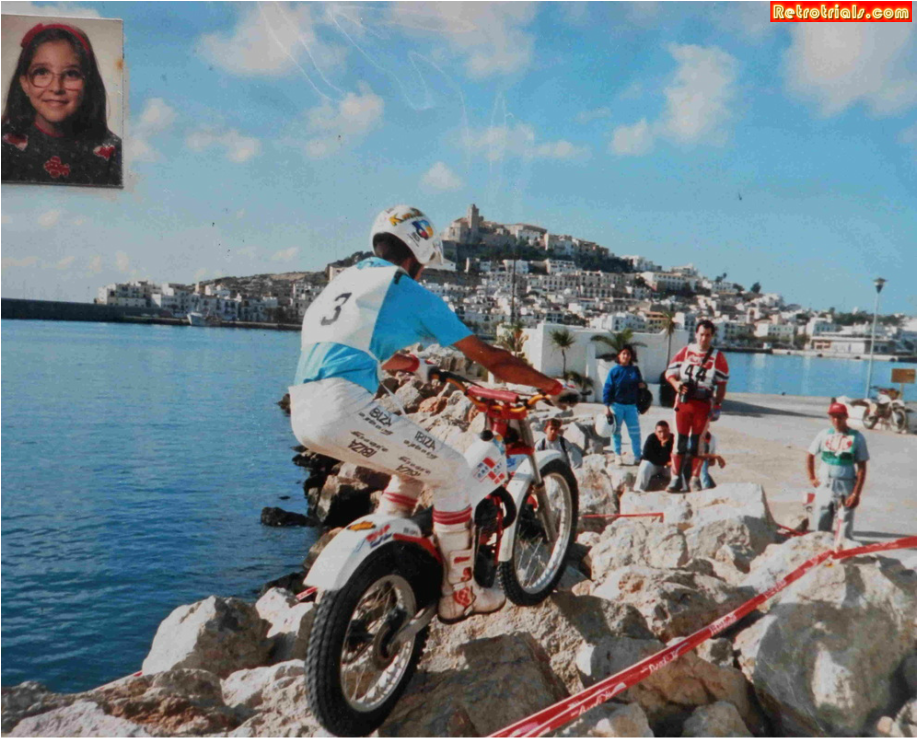