Even the entrance and exit tubes had to be changed. After a lot of cutting, grinding and weld work, I got a really simular looking rear exhaust.  Unfortunately the Beta stamping is missing, but in this case I had to make a compromise. I have seen pictures of the very first Prototype bike with the round barrel, where the embossing was also missing. It can be seen from this, that always parts have been chanced on the bike.


After the silencer was cut to length the holder were drilled for the end cap to bee fitted. Sascha put a small counter sinking on the hole
﻿Finally the silencer end cap was fitted with button headed self tapping allen keys and the bracket mounted in the correct place.﻿
Intake tube welded in the right direction 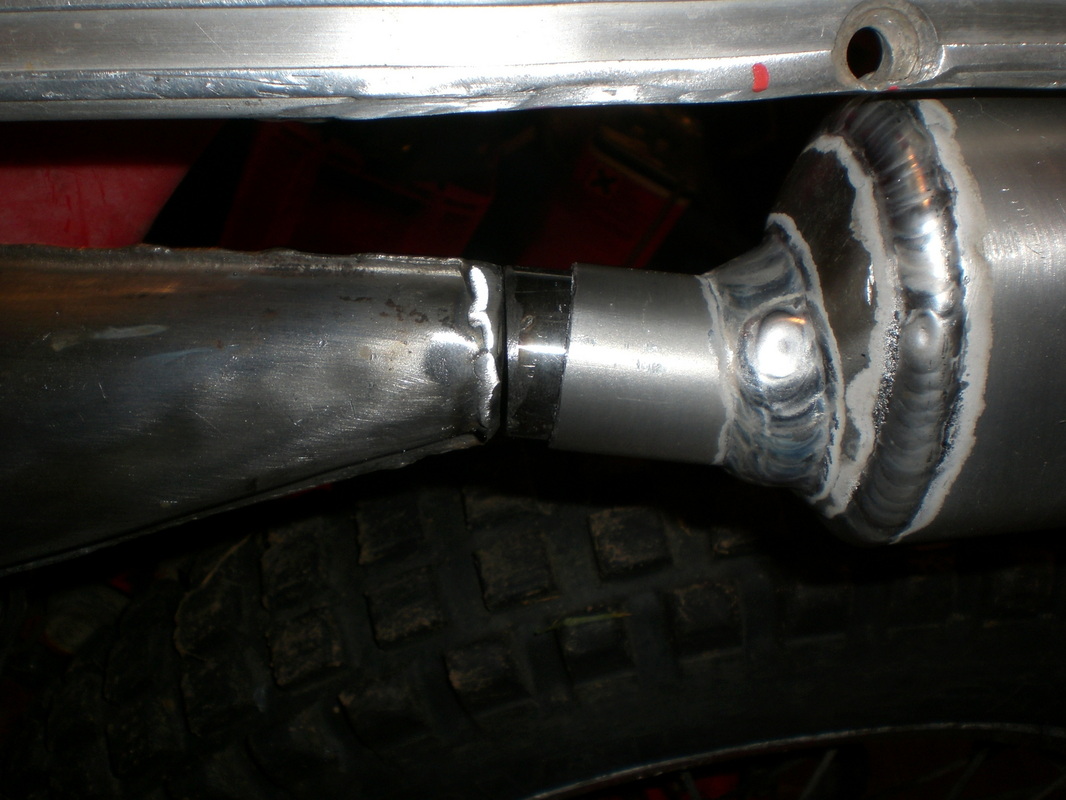 1988 JordiTarres Beta proto replica www.retrotrials.com
Anyway I was very pleased with the exhaust system, and after I had finished the weld work, it was ready for painting and I could start to strip down the Zero.
A few weeks ago I bought a TR34 of 1988 to have the needed spare parts for the Proto bike. It was more a frame with two wheels and a swing arm and fork. The rest was missing, but enough for me to have the needed parts. The swing arm and rims and many other parts on the Proto Zero were taken from a 1989 TR model.
On the picture you can see the nice weld work on the swing arm to have co driver foot pegs on the TR 34.
Phew ----- This guy didnt look after his bikes and mended everything with a stick welder and iron bar ........and i bet he's a great deal richer than i am  :).
A big hole on the side had also get closed and so I had to weld again. I was not sure at the beginning which rear brake system
the Beta factory used for the proto. After vigorous efforts I came to the result, that it must have been a system similar to the
later Zero.  As a result of this I had to modify the TR swing arm to adapt the zero brake caliper.
The swinging arm was in need of some desperate help. Luckily a skilled hand on the MIG welder seemed to carry it off. 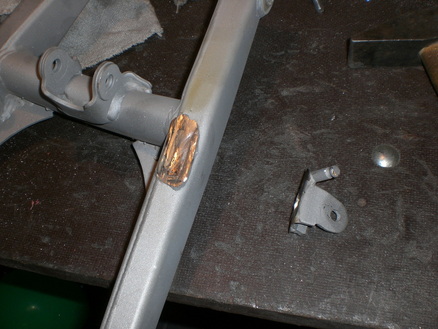 1988 JordiTarres Beta proto replica www.retrotrials.com
After I had grind the weld seam and cut of the side stand position point, the swing arm was ready for sand blasting.

Slowly  ,  but surely the swinging arm is starting to look a lot better.