Did you prefer outdoor or indoor events?

Pretty much both. After a season outside it was nice to go indoors where you had unlimited traction and less variables but then when you ride the same sections twice a week for 3 months you see your tyre mark and your skid plate mark on the obstacle from two days ago it gets kind of boring so your anxious to go outdoors again. They were the same obstacles that they moved around the country for the most part. There was one organisation in Spain and one organisation in France and they use the same sections.

Yes, he was the solo moto part at San Sebastian at the Barcelona indoor and some other ones. He had a few indoors.
Tommi said that it is common for riders to fracture or break their toes on this angular arena sections. Where the blocks are so narrow that they can only just fit the machine onto it, if the rider needed foot, then the foot would go down and the sump on top of the foot - Ouch ! 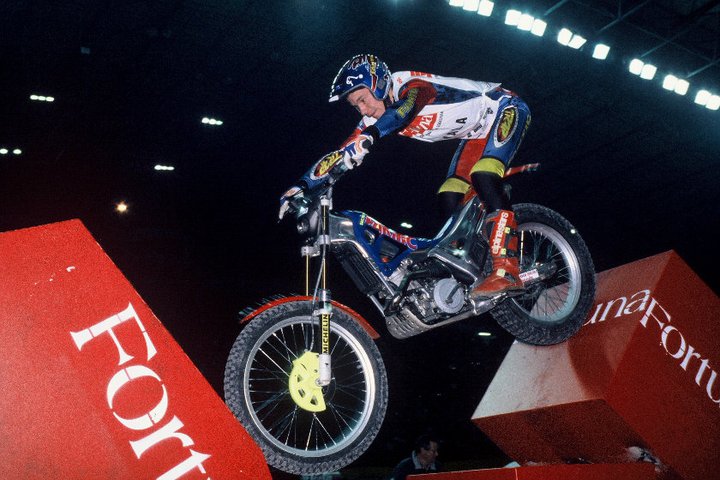 2013 Tommi Ahvala Interview WWW.RETROTRIALS.COM
I was really strictly against have a competition indoor. They started talking and asked if they should have this as a trial and I said definitely not, keep it as a trial but mainly as show. We should get paid whether we are the first of last. The moment they changed it around and introduced the finals the level of excitement went down right away and everybody started thinking for themselves and it became way more dangerous and less spectacular for Amos and Diego or anybody to be spectacular. If you want to get into the final you couldn’t do that anymore. You were there to win.

Did they take any notice of you?

Well they kept their system. I was really strongly against this. It should be a show.
Back then if we thought it was dangerous we changed it but then someone would think, well I might have the benefit here and you sound as though you’re scared so this came into it as well.


And we had to do different tactics sometimes. There would be lots of strategies that we could try to make the trial work to our benefit and get on top.

The speed race, you never knew if the points that you took, if those counted or if the winner gets zero points and the loser gets one penalty point or if the winner get -1 and then the loser gets zero. Sometimes winning was actually worse because then if you tied up you would actually have one clean less that you could count on the most cleans, as this would be a 1. They wouldn’t count it as a clean. It was always a learning curve and all this didn’t matter when it was a show but then you have a screwed up system and you start playing for the money but now it’s different.  The mechanical minder would be with the rider all of the time. He had no idea what other guys did. He didn’t know what I got. I didn’t know what I really got a lot of times as it just happens so fast so you need somebody else to keep score. Everyone did this. Now this is normal, it started with us


I remember as you drive out from the Barcelona airport you had this big ass billboard 100 x 50 feet. Jordi’s picture was there, well it was Ducados commercial for many many years. Every person who travelled out of Barcelona airport saw that commercial so it shows just how much recognition trials had in Spain.

I remember when they didn’t have a ring road in Barcelona, you had to go through the city and more people actually knew you there than they did in Finland. Of course I was the main competitor on the TV they always showed Jordi and I was always the bad guy ha ha ha ha. I was in Barcelona Spain. In Girona they didn’t think bad of me, I learnt some Spanish and the spectators cheered for me as they wanted a good competition. There was only one time I remember in Madrid. I was winning the indoor title. They booed at me and they weren’t happy at me for winning the title and they booed at me. That was the only time, they always cheered. The spectators didn’t care who won. They were there for a good show. I never had any bad feelings for Spanish crowd, we made a lot of friends down there and all the indoors were on TV so I got a lot of publicity, many were live.
Do you think that you could have milked any more cash out of Trials by seeking out extra sponsorship ?

Yes, yes yes, but by being a media monkey and throwing your face at every paper and going to every charity event that gets your name out there, we could have got a lot more but would it have improved our results.  I don’t know. Maybe I would have gotten more money from the sponsorship but instead of finishing 3rd I would have finished 8th and bonuses from the factory would have been less.

But at the time was this a weighed up decision of yours or not?

Yes yes, it was our decision from the very start to get our attention by action not by talking.
Helsinki has its own theme park .
When it was reopened Tommi was the natural person to ask to come along to do some crazy stunts. He didn't dissapoint them
Tommi rode up the wooden slimy steps to the top of the Roller coaster. Phew  - not me, I'll watch it on video :) Crazy boy 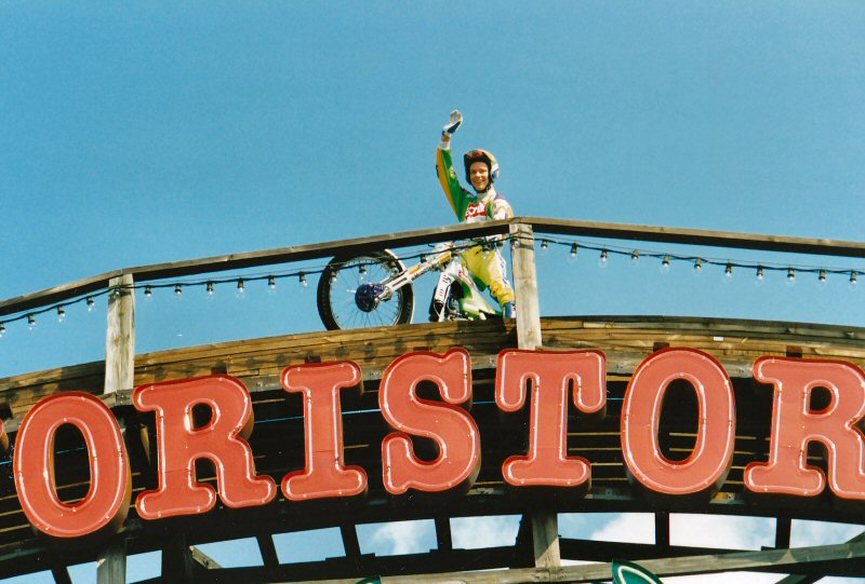 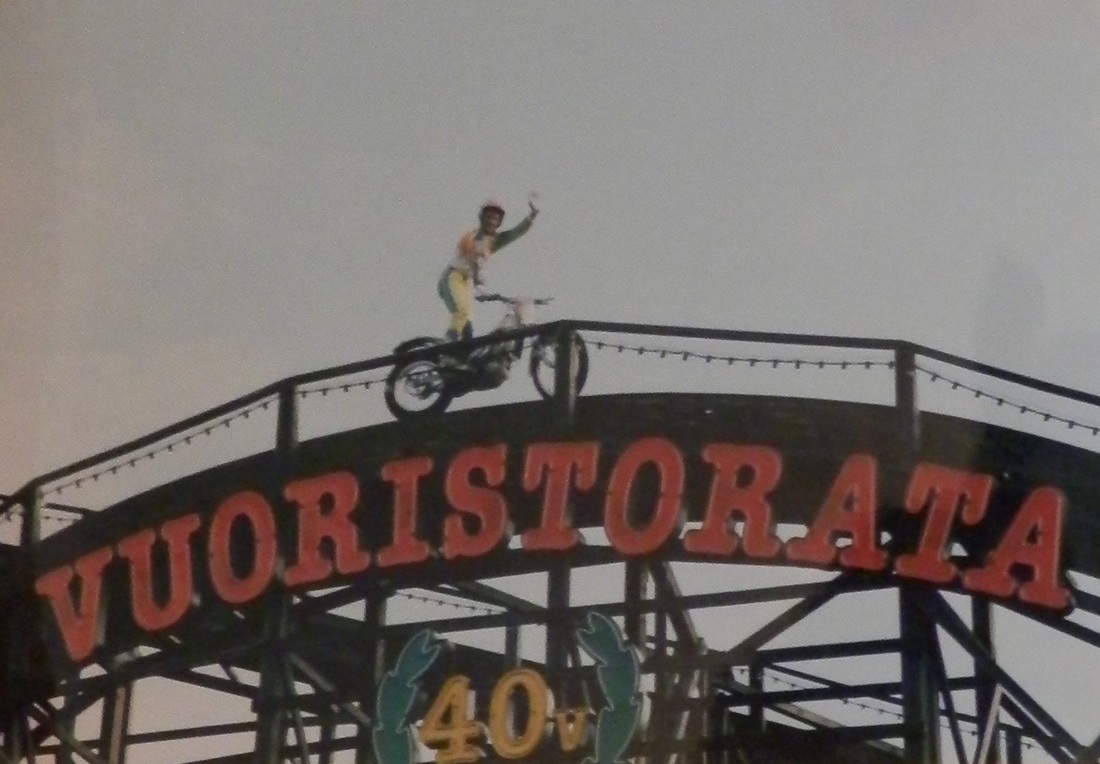 2013 Tommi Ahvala Interview WWW.RETROTRIALS.COM
So one of your options was that you could have gone back to Finland to do business there, but you chose to go to the USA?

I wasn’t having fun and I was looking for something else to do so the US was a good opportunity. Gasgas gave me the opportunity to start working for them right away. The whole idea of me going over there was to promote the sport and the brand. I was doing trials schools and riding national championship and visiting local Gas gas dealers and trying to get them going, get them excited.

Who is the Gas gas importer in the US?

Dale Malasek. He lives in Kansas City. He’s as ex-pilot, a captain for TWA for 25 years. He’s the best best person I have ever known. The curious thing is that he has the same birthday as my father. He was like my godfather there. He would do anything for me. Whenever he was real busy he would drop everything and help me over some stupid little thing. Still today it’s like this. I got offers from other factories promoting their bikes there too and I could have made considerably more money but I couldn’t give up the loyalty and help I get from Dale. You can’t put a price tag on that.

To bet honest I’ve been cut out of that scene, the Nationals since 98, 99. After that I’ve been doing shows so I don’t have time to follow up on trials.

Are the American’s really receptive to the shows out there?

To the shows yes, very much. We kind of stepped into the unknown. No one had really done any shows there so a lot of places we had to go almost for free and they didn’t know what to expect. We saw this as an investment. At the end of the first year we managed to score a team contract with the biggest motorcycle show organiser. It was a 14 city tour, thousands of people every show. We managed to score that contract and it exploded from there.
We had 3 or 4 shows every day, at the weekend sometimes 5. Every show of every day we got about 5 show offers as it was this new thing that no one had seen. It just exploded from there. After then we were doing 220 days of shows a year. That doesn’t include setting up and travelling. We were very busy. I remember from March until the end of August I didn’t have one day that I wasn’t either travelling or setting up or riding. We were on the road all of the time. Money would start coming in. We made a big investment with about 60,000 in that, so we got this back as quick as we could. I had a place in Kansas City but lately I’ve been basing myself on the Texas border. A good friend called me and taught me how to fly planes and hooked me into golf. It’s a little warmer than Kansas City so I spend a little time down there.


When I was working as the Northern Europe rep for Gasgas we went to the motorcycle show. I think it was in Cologne. Every two years they have a big motorcycle show there, so I went to represent Gasgas there and Amos and the minder than used to work for Toni, he worked at Hebo and he developed a lot of special parts for Hebo. Ton, that was his name. He was a hard core trials guy. We were walking to the show early in the morning and they had a trials display there, you know local German guys and they actually had pretty hard stuff there. None of them could ride and it was like a test circuit and you could get used to a trials bike. Why they had all the hard obstacles I don’t know. There was not a single person who could ride. We walked buy there a couple of times and one morning we didn’t have meetings for a couple of hours so I told him lets go and check that trials school out. We went there, they didn’t recognise me of course as I was dressed in a suit and said “can we test ride these bikes “,  “ yes of course you can”. They asked Ton where he was from and he said he was from Spain. They said “do you know Adam Raga?” Ton said “who is that, is he a football player? Who is Adam Raga, I have no idea. I said “I’m from Finland, I’ve never heard of him”. So they started explaining all about the trials bikes and we had all the padding on and arm and knee pads and crash helmets. I said “how does this thing work”. “Have you ever ridden a motorcycle before” they said and I said “no, I’ve never ridden a bike, but I think I can handle it. I heard that trials bikes are pretty difficult sport” “how do you start” I asked. I played a total idiot. They said “you have to be really careful with the throttle and brake as these bikes are really sharp”  “ok” I said. So I take off like a mad a couple of times riding flat out and just stopping short of the fence out of control. Then I started doing wheelies and nose wheelies. I then rode the obstacles there, that they could only dream of riding, you know. I parked the bike next to them and said “wow, I always thought trials were hard but I guess it’s pretty easy”. I just walked off …..you should have seen their faces ha ha ha ha. We just left, but we had to get back after our lunch and apologised and said “I guess I’ve been riding a few times” ha ha. They said “If you are from Finland, “you should be in the Finnish National team “. I said “oh now they’ll have the good guys for that “. One of the guys there said “I think I recognised you, but I wasn’t sure “. We should have had that on film, it worked perfectly ha ha ha ha.