No I was more the theoretical part, numbers and theories. If I had to machine a piece of metal I had a problem – ha ha .

When you were a boy who was your bike hero?

My bike hero had always been Mike Hailwood. I love so much his style. His logo was “For the love of the sport”. I was a really really  fan of Hailwood.

When you were a boy was there lots of competition to be the best?
No, like I tell you, my brothers were much smaller than me. I was more his teacher then the competition. I was the older brother. When I was riding competiton,  I had my first competition win at 16 and my eldest brother was 10 so there was no competition.

Did your father encourage you to be in the competition?

Yes, he like this. He didn’t want me to ride in the road racing because it was too dangerous at the time and he had lost so many friends. My father when he started he made a fantastic and very modern specific bike for road racing. This was the Montesa sprint. But with the Montesa sprint he had a very good friend Juan Bertran . He was a fantastic rider, then he get killed with an AJS in Asturias in Oviedo  in a race and there he was killed. This destroyed my father at this time and he say he would never make a real road racer again. When he started with Bultaco he started with the TSS, which was not a pure road race it was a Tralla super sport. This was more like a clubman race, not a world championship racer. For many years he was doing the TSS. Then Ramon Torras came, he was fantastic and a tremendous rider and he was racing with the TSS and the problem was that Ramon had no feeling of the limit. He was so talented but so risky in what he was doing on the bike. The problem was that he was riding against the Hondas and the World Championship bikes and his bike was TSS clubman bike. The Hondas were prepared , thought and designed to win races and at the time my father say if Ramon say he wants to race I have to give him something more powerful and something better.

Remember that when Ramon dies in the race all the designs to make a twin cylinder racer for him, a real racer for him were stopped. This bike was never made as Ramon died. My father said to me many times If you want to ride in road race , you can do but I beg you don’t race ,because you like to race motocross and you like to race trials , why do you want to race on the road ?. Your mother and myself will just be afraid all of the time.”

If I was riding for my father and for his company there would be a good chance my father might try to employ my services for a reduced rate or for free . How did this work for you?

No, at the time I was living at home with my father and was having my meals there but the rest of the things , my car and my petrol I was paying , my trailer, but I was earning money from Bultaco . My father buy for me from the factory my first Pursang and my first pursing . I think he gets a good discount. Ha ha . I was a junior and at this time I could not just demand anything. When I won the championship I was paid like a normal professional a normal amount.

Did you ever help out in the factory with the fabrication and the assembling of the machines?

Yes, yes, I was studying at the university, I was riding in the competition and I was also working at the factory. I would work in the racing department. I started working on the prototypes there and making adjustments like the men made for Sammy Miller. When the bike was changed I was the rider of that bike and I had to say the engine is not good enough or the suspension is too weak. 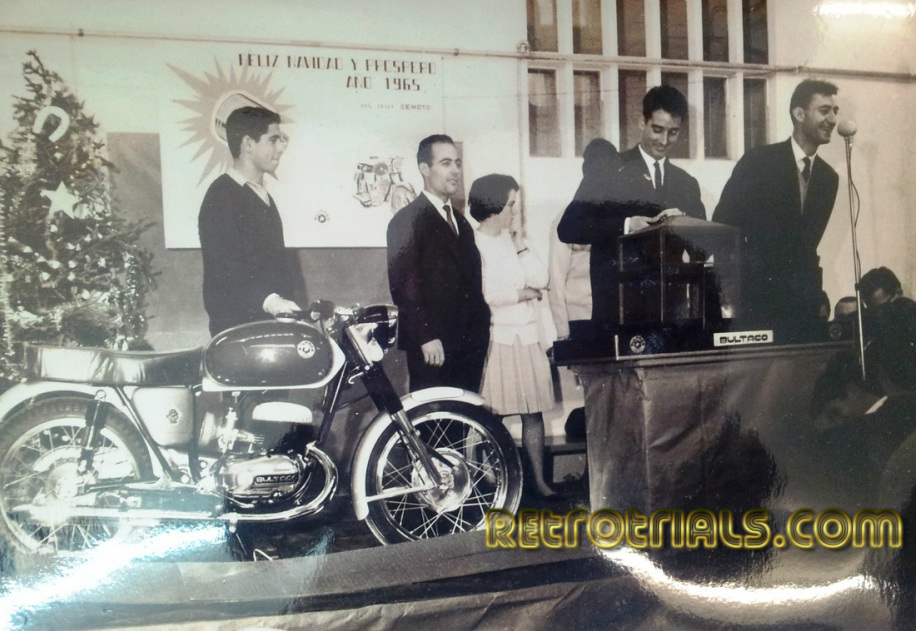 Here is a very rare picture of Lucia Romero (in white dress) on stage at the Christmas Bultaco party. The road race GOD Ramon Torres is on the left standing by the bike being given away to the lucky raffle winner. Thank you to Lucia for this excellent photo. 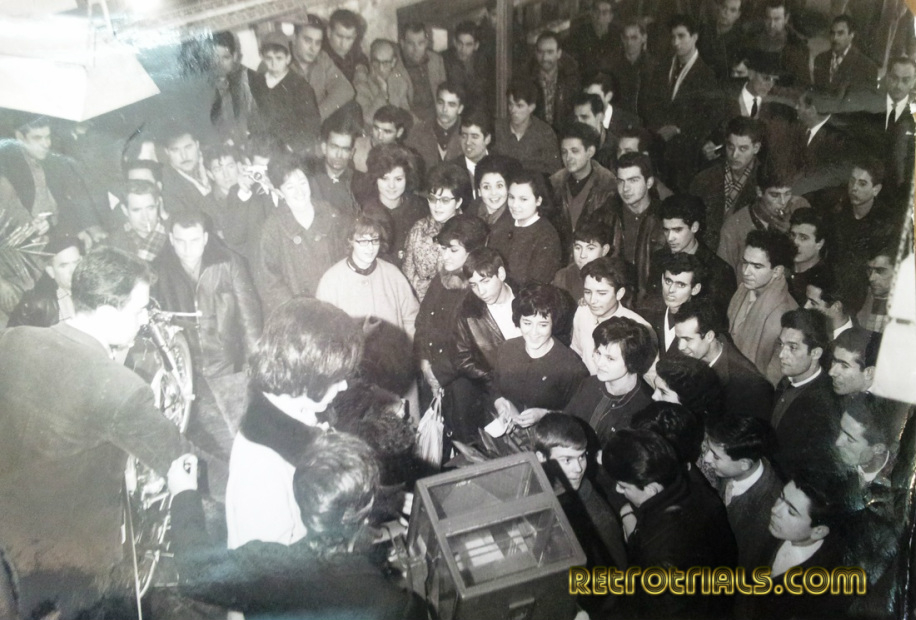 Another picture of the Bultaco Christmas Party. Look careful in the audience. There is someone special there. Ignacio Bulto interview 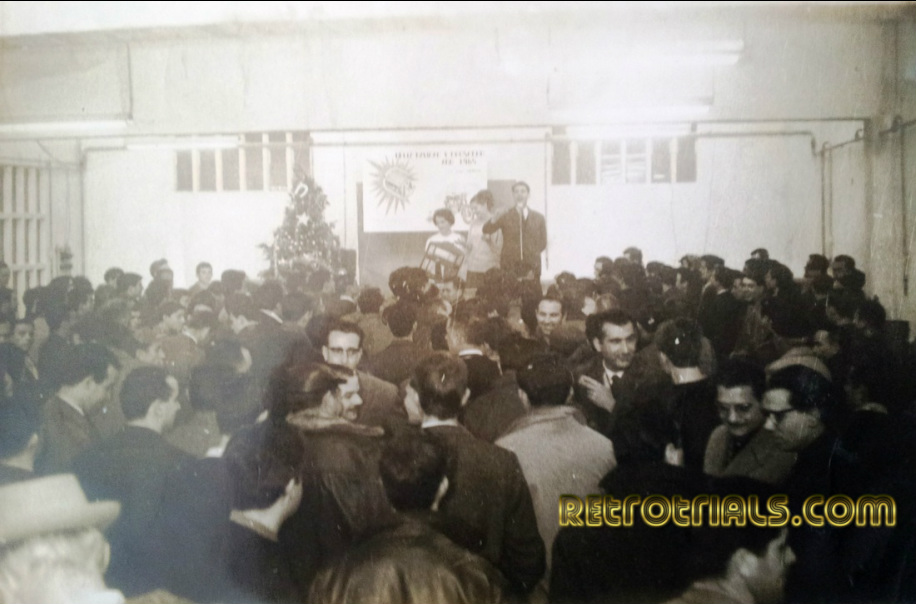 The Christmas party at the Bultaco factory
Later on, were you ever involved in the running of the factory?

Very little. I was working in the technical department on the prototypes and I specialise on the department of suspension  and I was responsible for the suspension of Bultaco. At the very end I started to work in the commercial department but it was only in the last year. I was not involved in the direction of the company.

Did Bultaco make the gearbox?

It was designed by Bultaco and machined at Narbón, in Sant Adrià   The assembling was all in Bultaco. The fibreglass tanks were made by Fibrapol that was another company. The chassis were made in Monfort.The story of Monfort is fantastic also  ha ha .

What is the story of Monfort?

Monfort was a factory is Esparraguera which is a small village 30 kilometres from here near Barcelona near the mountain called Montserrat. There was a man there , his name was Monfort and this Monfort before Bultaco starts he had a marque of motorcycles called Monfort and at that time it was very difficult to have an official licence to build motorcycles and my father come to Monfort “Senor Monfort I will buy you your licence. You will not build any more Monfort but you will make all the chassis for Bultaco”. Now, If you look at the first Bultaco licence activity for Bultaco it was under the licence activity for Monfort. If my father was not able to buy this licence my father would not have been able to make any motorcycles. Mr
Monfort he say ok, my bikes are not very good. I prefer to make chassis for Bultaco. All the chassis for Bultaco were made in Esparraguera by Senor Monfort. Instead of making the bikes, he now made the chassis.


The wheels were assembled in Bultaco because it was easy to make a machine that with 2 persons they would make many wheels. The exhausts were made outside also (Motoescape).

Did the factory use mig or arc welding?

At that time Senor Monfort use Arc welding as there was no Mig. At the end it was Mig. For the trial it was arc.

Spain is famous for its siesta. What were the shifts at Bultaco?

It was very strange for Spain at this time. The start of Bultaco was by my father the heffer , the boss. All of these technicians, they were workers really. They said ok now have to go for the time table. It was normal to start from 8am to 2 pm and then have 1 hour for eating and then work from 3pm to 6pm in the afternoon but because these people wanted different things they started to work at 630 in the morning and they stop at 4.30 in the afternoon. For me this was a disaster as I have never loved to get up as soon as that . ha ha .

Did you have to do this?

What were the biggest challenges in Bultaco? Apart from making money?

At the beginning of Bultaco I was not there but I heard my father talking about getting the first materials to build the engines or the frames. The first materials were the problems. After this it started working in the factory . It was very difficult to have all the pieces to make the motorcycles. I remember many times bikes that were finished but for example they were all in the passage with no seat because no seats and in the end the big problem was the trade unions.

The front facade and the roof changed. This is a spares parts division of bultaco as today and  as in the above top left old photo 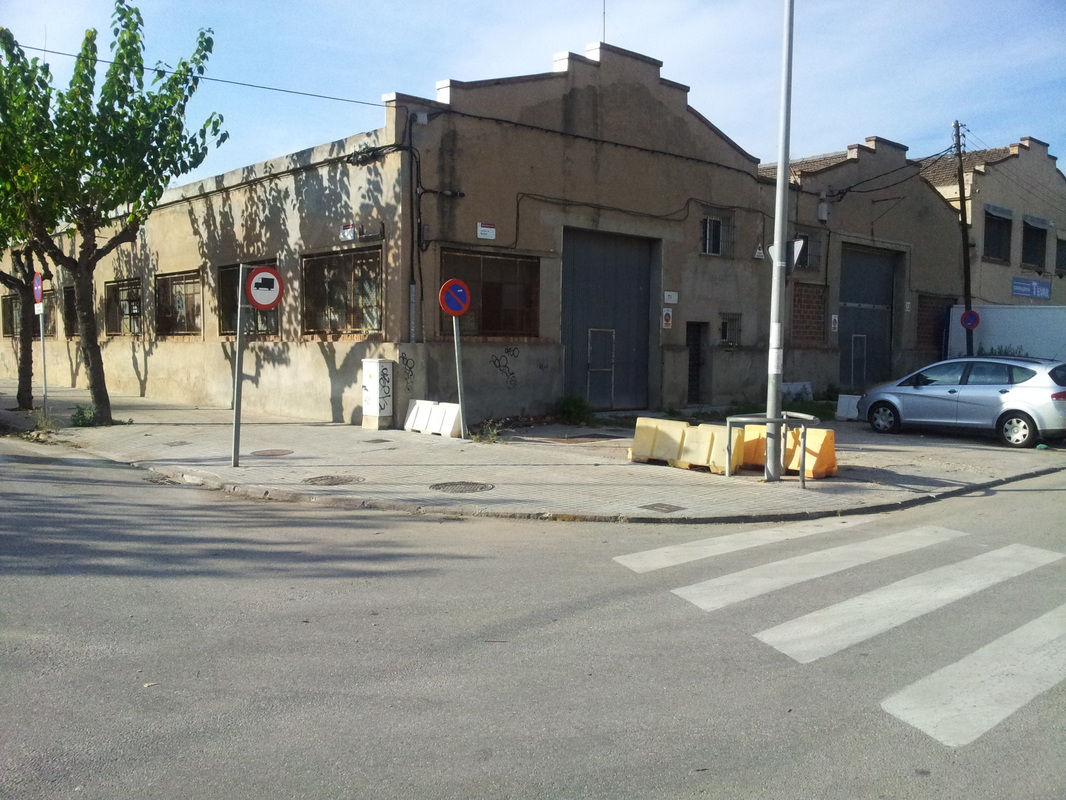 Ignacio Bulto interview - Old Bultaco spares division
How many workers did Bultaco have?

It started with very little about 12. It was growing growing growing and in the end Bultaco has 550 workers. When the activity stopped we were 350 persons. Too much too much for sure, but it is complicated, very complicated because it is related to the Spanish situation. It is like when some people talk about general Degaul now. It was another time and moment in time difficult to understand.  You cannot judge with the eyes of today the things that were passing then, 50 years ago. The whole thing was different.I used to race motocross at the same time as riding trials… At that time many trials riders were racing motocross. For example Sammy was racing in the tourist trophy and I think he has won at least one in the mundial. This was on the road. I remember seeing Malcolm Rathmell, he was racing in the International 6 Days Trial on the Triumph and this was an enduro. At this time the pilot were more like motorcycle riders, not so specialised  as today. Today they race only one race, moto 1 , moto 2. At the time they were riding in 3 categories and also riding in the trial.

You start world exporting companies, you win a large number of championships as well. Where do you get your drive from to do all this, when you could work like most people and just take the pay and have an easy life?
I can tell you. I love trials, but I hate trials competition because you are always judged by an amateur and you have to say thank you as he has been there for 10 hours on the mountain ,he is not a professional, but he can judge you. You can ride and have a fiasco and another rider have the same ride as you but he gets a three points. That I hate. I love trials. Why have I been Spanish trials champion? Because of my father.


My father said to me one day “Ignacio come here. I have to beg that you have to race in trials. I say to him Heffer I no like trials competition, I like to ride the bike but not the competition”. Ha ha ha.  He say “Yes I know but I need you “ . I say “Ohhh, that is the worst thing you can do to me. Ok, what do you want?”. My father say “You have to win the Spanish Championship otherwise Montesa will win. Pedro Pi will win the championship so you will have to.” I say “Ok, Ok, we will go for it ”. We win 4 years in a row.  That’s why I was riding in trials also I had a deal with my father. I say “Ok I will try and win the trials championship but you have to help me to race in road racing. “   My father say to me “Ok, don’t race trials”.  I thought to myself “Oh no I have lost an opportunity”.  I then say “You help me to race motocross” It was agreed that I ride trials and he will help me to ride motocross. I remember I was Spanish junior champions in the trials I was Spanish junior champion in motocross also.  Both of them.  The timing of the two championships was different I could ride them both as they were at different times of the year. In motocross I was enjoying the championship but in trials I not enjoy it but I have this deal and I have to ride. 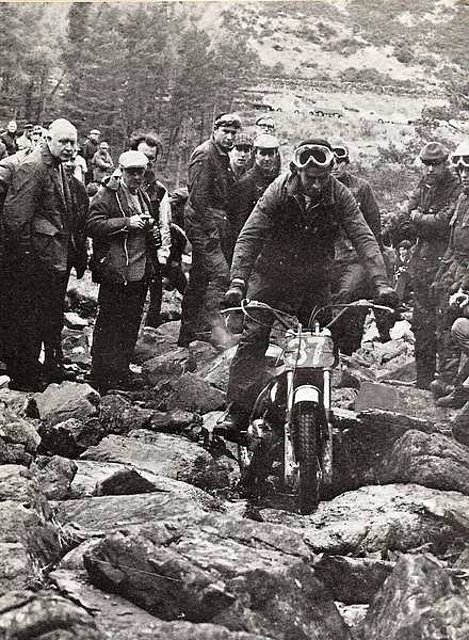