You are renowned in the trials World for being a real crowd favorite. Was this hard to live up to?

It was entirely natural. I have been like this all of the time. I know that for maybe one year or two years, I think 95, 94 I finish 12thand I think there were Tarres, Colomer, Pons, Garcia who beat me, Miglio, Bosis, Commozzi but for the indoor they prefer to take me than take the other people, that year. It was like they bring me to the indoor because the 2nd or the 3rd Spanish rider and they bring 3 Spanish and the Italians and bring in 8/10 people in those days. In 95 I was ranked 12th and there were 10 riders better than me but they still bring me and they still pay me the same money as I used to get before. Some people who are better than me get less money than me. I take the indoors as a show.

You’ve already said that you had a beer, but Jordi is known for not drinking and he say he didn’t drink. You are loved around the World for being that bit more normal, with you head on the ground and so much more approachable that other riders. Did you often go out drinking the night before a trial and get trashed?

If Jordi say he didn’t drink, then I’m not going to say that he drink but ……….(silence as Amos Pulls face).
I like to have beer with a friend. When I was a top rider I would not drink but sure I would have a beer or two. I didn’t go to bed at 9 oclock. Now I have retired from riding when I go to make Scotland to ride I will stay up to what time I want with friends and have a beer of course. If I have to go to bed at 1am and get up at 7, it’s not a problem for me. I’m not going for winning at Scotland. The factory when they send me to ride, they no ask me to win, they just ask me to go and to talk with the people and speak with the journalists and we can talk about the new bike and things like this. It’s like “Hey, go and speak with these people and show them the new bike”. This is what this is about. When I was minding for Dougie and the rest of the people I would stay talking with the people of the trial until 2 or 3 o’clock. If I go to England and I see a few friends no problem. If I do my job.

What do you do in your spare time now?

Cutting the grass ha ha ha. In summer time now it is very busy. This is the first year I work full time with my father and also with the new bike I have to travel to Barcelona very often this year.

Other than winning the Scottish Six Days Trial what was your proudest moment in trials?

Winning the Spanish Championship in 96 was amazing for me. There was Jordi Tarres, Marc Colomer, one and 2 in the World Championship, Joan Pons, 4th in the World Championship. There were many top riders who rode the Championship that year. When I won it was like (Amos whistles). Also because I’m not from Catalan it was something special for all of the people outside of Catalonia, because trial is all Catalonia. So that one was very good. Also Trials des Nations has always been a very race as you work as a team, it’s a very very nice race and guy friendly ha ha

Who was your biggest rival?

I think Tarres, because I was growing when he was still growing and he was on top all of those years. I finished 2nd on the Spanish Championship many times and he was the winner. Not the same in the World Championship as I finished 4th.
Did you meet a lot of nice girls on the Championship circuit?

I don’t know, I don’t remember ha ha ha. Like everybody, I meet beautiful girls and some very nice guys ha ha ha.
Thank you for answering these questions and giving us your time Amos.

Amos then listens to his boy John who wants his Dad to give him a ride around the garden on his motorbike.
We cannot say no to this small child and we go to Amos's garage to see this and the special bikes he has.

The first thing I notice, when I return to Amos's garage, is pants mounted on a tree stump. Hmmmmm. Amos told me that he found them when he was gardening and he thought they were to good to throw away :) 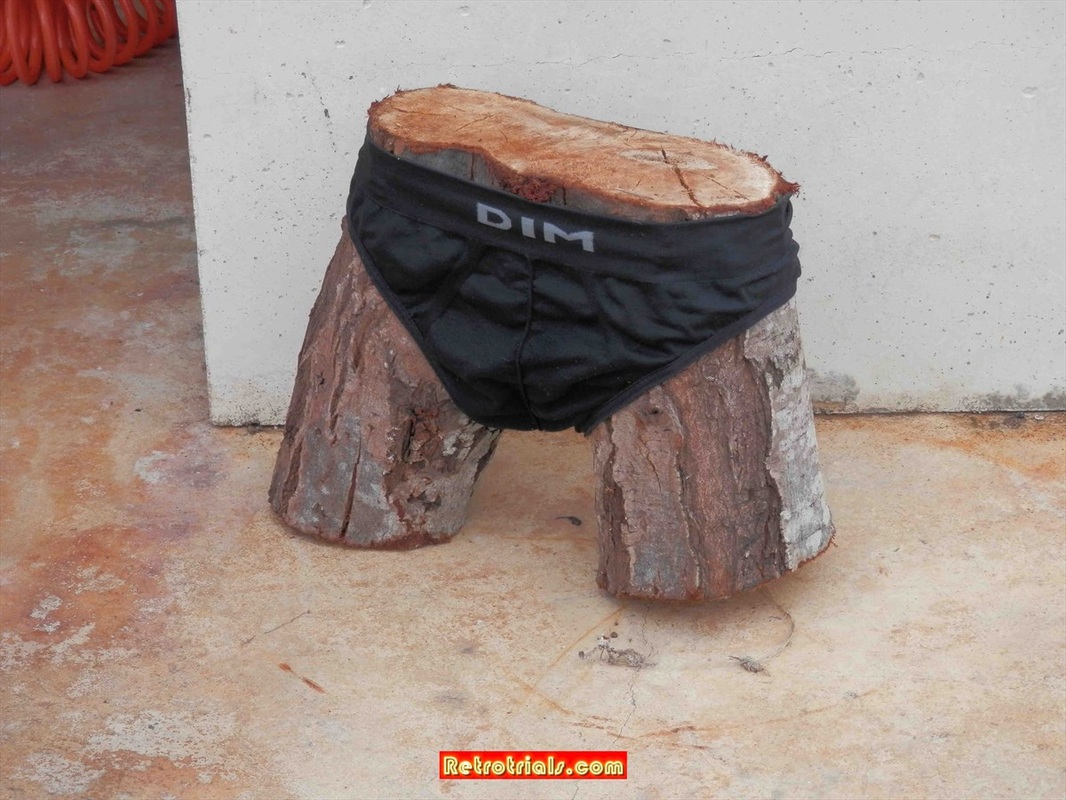 Amos Bilbao Interview WWW.RETROTRIALS.COM
John is a huge fan of Toni Bou. His crash helmet was given to him by Toni and is a mini replica. Sometimes when John is at home he pretends to be getting telephone calls from Toni - cute hey :)  When he sees Toni though, John gets a little embarrassed and wont say a word :). He had no such problems when we were there and was a real sweetie. John has lots to say :)
John loves to rev his dads bike. Amos holds the clutch in, just in case John treads on the gear lever ;) 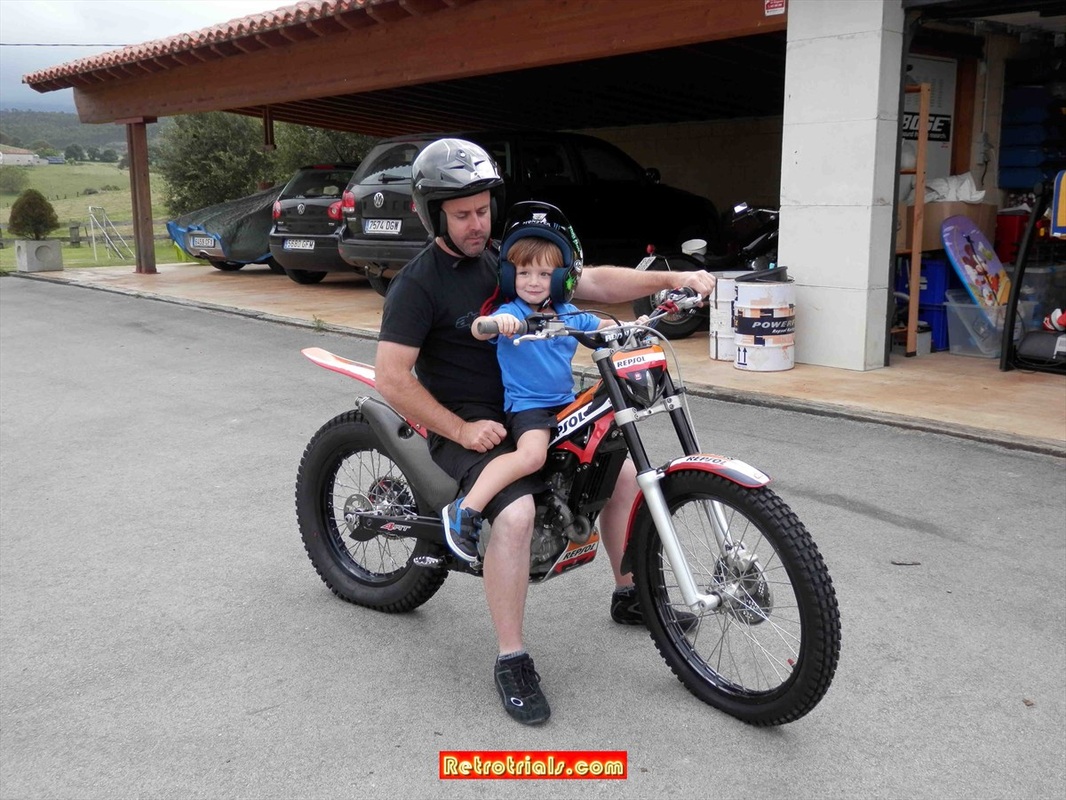 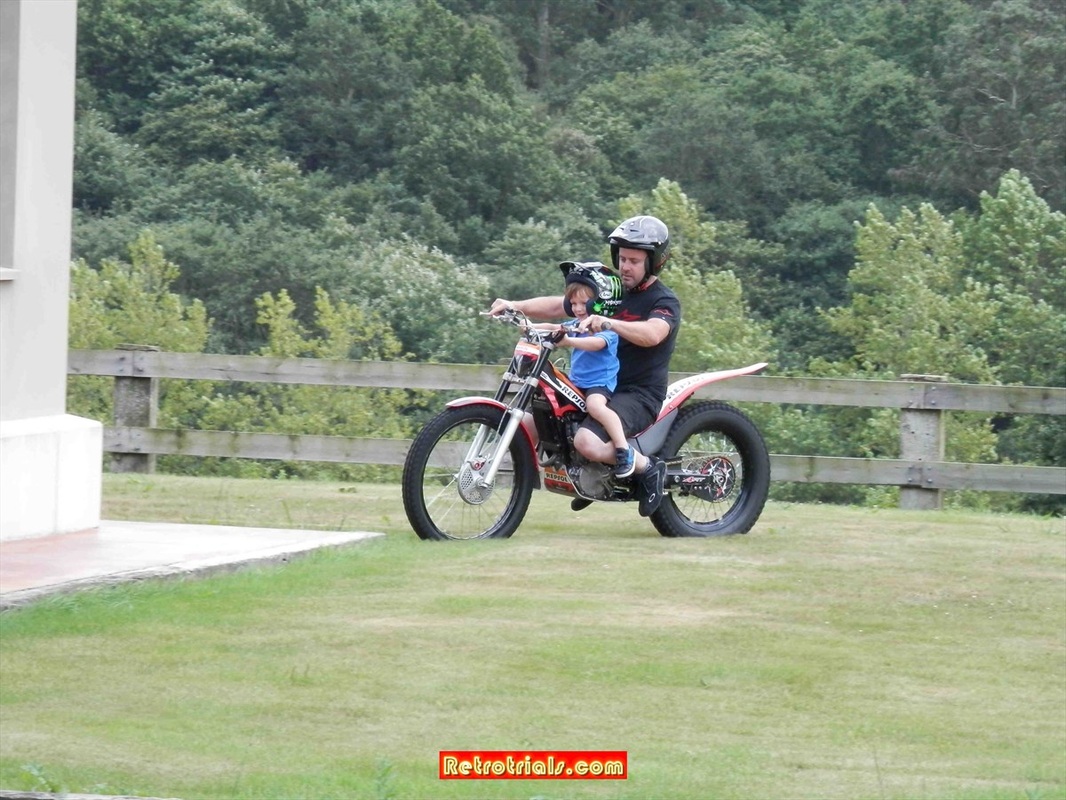 Amos Bilbao Interview WWW.RETROTRIALS.COM
John has a great time. When he's happy everyone is smiling.