Did you ever ride the JJ Cobas?
No, but I work with Antonio Cobas with Montesa when we have made a prototype the same as the Ducati. I don’t know if you have ever seen a picture of this bike. We make a lot of things with this guy. He is a very very very nice guy.
Thank you to Josep Argerich for these 2 photos
Where did you make this?

We make this prototype in 99 or 2000 I am not sure. We make a few other things with the wheels. The bike is in the factory. There is only one. 2 frames, but only one bike. I make all of the tests with this bike.

This was the same times as the 315 when Colomer was there. Maybe before they sign with Dougie?

Why did they make this bike?

Because it was kind of …..sometimes strange things happen in life. Cobas had a very good relations with one man in the factory and some people so they call him to try and make something and he make one. The frame was fabricated in the same competition department of Montesa as today.
How did you get the job and stay with Montesa after your professional competition riding career had finished?

Well at the end of 98 they contact me for being the test rider for Colomer. I start and still was quite a good rider and the results were better than they expect. That make me continue rider as well as the testing of special parts for the factory. When Dougie arrived at the team he ask for me to help him with the same things I was doing with Colomer but also for full practice as well. Normally I never went to full practice with Colomer only competitions. But with Dougie he want me to go with him every time to practice. So we start with a relationship in Barcelona and Dougie was living in my house for quite a long time. I was still riding good and testing good for Dougie and he was very confident about me. Many times on Saturday night we have problems with the bike he would say “tomorrow morning were going to fix”. The next day the mechanics and myself went to the trial at 6.30 - 7 in the morning and I start to test things with Dougie bike, more or less everything was fixed. He has a lot of confidence. Even if we cannot fix he trust me about. “Hey Dougie, we cannot fix, man. It’s impossible. We’ve been doing our best, we try hard yesterday and today”. He say “ok, no problem”. After the race he never complain about this.

Do you remember any special parts that were tried that were radical but that were never carried on for one reason or another?

I remember the most special thing is a full bike, that was the first 4 stroke that HRC bring. I don’t know if it was 2002 or 2003. Everything on that bike was special. Everything was prototype. It wasn’t full injection. They sent to us to see if we can make the same things with that bike. We can make most of the bike, but there were one or two things that it was not possible to make the same. The prototype had carburetor and after test we say we want fuel injection.

What is your official Job Title at Montesa?

Test rider. I test the new bikes for Montesa. When a bike is built for Toni or Fuji, the first man who step on the bike is me. I make the first 100 km and check everything. I check the engine, clutch, the performance, the front forks, wheels, brakes, everything. Then if I find something we fix and then pass to the riders. If they do not like something they explain to me and I concentrate on making that area good and repairing this for them so that they are happy. Sometimes the point that Fuji no like is the thing that Toni likes. This happen very often. Before I was working only for Dougie and I was only focused on Dougie, but now I test Toni’s bike and then I test Fuji’s bike.

Do you see some of Toni Bou in yourself? When you watch the videos of Toni practicing, it’s clear that he is talented but he does crazy things as well and you did this when you were young- ha ha. Tarres did not do crazy things. We see videos of Toni riding up incredibly huge and steep hills and then fall off and slide down. He has no minder and is just having fun.

I feel scared looking at Toni. I’m not saying I don’t like watching him practice but sometimes it is like playing with the bull. It’s like “Why?”. This happen with Toni, not with the others. Why are we testing this now, not necessary. This happens wth Toni. I have this feeling with Toni many times. He has everything under control. It’s about all those things they do these days with the back wheel. When I see that I think and remember the crashes I have had in my life doing this and this is like a counter. After a few years you are getting closer to the crash. “Why, do you want to count so fast”. Relax.

But, he seems to get away with it. Is there a worry by Montesa that he risks injury to often?

The problem is that he feels confident in places that the rest of the people do not. The main thing about Toni than the others. This also happened with Dougie, is that he can make 10 times and 10 times make exactly the same thing. The others no. Fujinami only one time each 10, Toni make every time and every time make the same .Toni is still only 24, the others are 30, Cabestany 33. 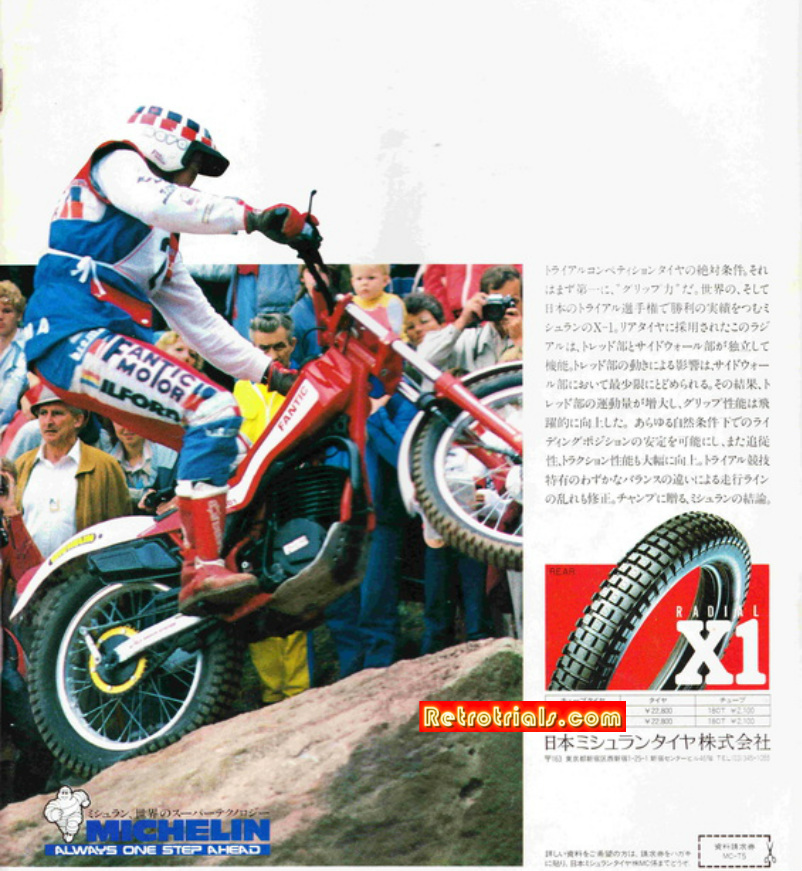 Amos Bilbao Interview WWW.RETROTRIALS.COM
Do you work for Michelin also?

No I work for Montesa.

They bring special tyres for me to test, but most of them are similar to the ones we use.   pause…..

Please tell me about the tyres, other than the fact that they are all black and round ha ha?

Amos is cautious……. I remember when they start with the x lite and the first ones were really light. They put one on the front wheel. Every tyre I put on the bike I make exactly the same riding figure of eight and other tests. I start slow and then start to go a bit faster and in one corner I try to turn and the bike go straight. It was so soft that that it slipped and jumped sideways in tiny steps sideways, when I turn all of the time. I make always the same. I make a little on the road, a little track riding also. This all happen in Barcelona. I say “hey what’s going on, this is not good, not good at all”. They bring 6 or 7 of these tyres but they will not work. You know it is like the bicycle when the tyre is not hard enough. We are always working on the tyres. Michelin pay for my car tyres for the past 6 years.

What do you think of no stop?

I like it. I like no stop. The rule and the section maybe not perfect. You see the difference in the riding styles of the riders and everything. Before everybody was doing the same thing. Just stop, move the back wheel inch to the right, flat out and then do the same thing. Now you can see how Toni is doing, how Raga ride the bike, how the bike is going. You see many things that before you didn’t.

Did you ever get scared doing sections?
Yes, but I don’t remember when. Sometimes this happened. Normally more at the end of my career as not many practice. I have this problem now when I test as I remember all the things that I make a few years ago and now I’m not practicing now like I did and I practice alone. I don’t need to try that.

I think about the weight. I can’t believe the FIM don’t make the weight limit before. They make this in motocross, enduro and road racing but before not in trial. I cannot believe this. It is 65kg now. If they say 50 ok, then that is the limit. I think this weight is ok. I think they look at the lightest bike on the market and they fix it this way, they don’t fix the weight of the Montesa or the Sherco, they fix the weight of the lighter bike. I think they made it like this. I think they checked a few standard bikes. This rule come in recently and they make this and the petrol capacity and you cannot refuel in the lap, which is good. I don’t know why they don’t make something with the engine capacity as they have in the other disciples. People in trial complain about the technology, but why. In Formula One every year they have to change the rules. In motocross 98kg, 450cc. In trial everything is free. Are we more clever than the rest of the people or what?

How can the industry generate more sales?

First of all I think the trials bike is very expensive, then we have many problems for using the bikes. 20 years ago if you use the road and the Police see you, they say nothing. Now, you go to jail. The insurance the driving licence, this and that this is a problem. For 16 years you ride a trials bike and no problem. I don’t know if somebody die, but now it is impossible you cannot ride anywhere.
How do they improve the sales of the trials bike?

Now if you are a kid you have millions of things to do other than go on you bike and go in the sh*t ha ha You need to pass this from father to son to from father to friend. Before in every town there were trials bikes. In Italy in the north every town was full of Fantic and SWM or Garelli in the town. The idea to bring the trials bike to the people is to make trials bike more…….. I don’t know. If you get Toni’s bike and out on the old pirellis he’s not going to do what he is doing now, only with the tyres. Bikes are to specialist, just for the trial, take out the bike from your van, you cannot go on the road and you cannot go to the next town where the quarry is, you have to take the bike in the van and then up the step and move and turn and up the next step. The bike only works for this. It’s too expensive. You have a bike but you have nothing. If you have trials bike now, it’s only for trial not even for going to the bar or going to buy the newspaper. With the earlier Ossa and Fantic you could do all of this.

Did you have to go to the army?
Yes, I went for one year in 1991. I was very lucky as at this time I was top 6 in the World and the Olympic Games were in 92 so they make more help for sports men. I never miss a race.

Did you go to the gym a lot?

In those days yes, a lot with my trainer.

He would make you?

Did you ever suffer from pre-trial nerves?

No, not before or after.