Do you think the sport has a good future?

No, no I dont.  We’re having trouble with the land. It’s all being used to much. Everywhere we go, land is disappearing. When we last went to Andon, we were told you can’t ride at a certain place anymore. Places we go to in Spain we can’t ride as well. Many places. Some of the top riders in Spain have to have a special minder just on look out to look for the police, when they are practising. In the week after next where we are going to Spain and Bri told us we can’t practise at our usual place anymore. So you’ve only got certain little areas where you can go to practise and they’re under scrutiny now. It’s getting bad. A lot of it is these ecologists.
What involvement did you have with the Paris DAKAR?

I always wanted to ride the Dakar rally. In fact the mate I’ve just been to in the South of France, he is part of the team that does the Dakar and is one of the mechanics, I don’t know which team it is. They have Sherco’s but it’s nothing to do with the Sherco factory. They earn a fortune. The team gets an enormous amount of money. Anyway, Yamaha Japan said “Mick if you really want to ride the Dakar Rally we’ll supply you with a bike”. I said that I’d really love to do that. They told me that I had full factory support and have the bike everything like with a massage at the doctors. All I would have to do is ride the motorbike. The bike was delivered to Sonauto France, as it started in Paris. The entry fees were enormous. Anyway that was all paid, Jean Claude Olivier was a sort of goafer for Yamaha France at this time and then in the last years of his life he was in charge of it all, he was the big boss. At the time we never really clicked together. I don’t know why.
He said”oh Mick, I’m ever so sorry Mick, we’ve decided it’s not a full international, the event isn’t and we’re giving your Yamaha to one of our riders”. This knocked it on the head and my bike was taken over by another rider from France or it might have been Belgium. We then met the big boss of the Dakar from that time at a classic motorcycle show. Jill was explaining all about this and he said “if you had told me, Mick would never have lost his ride. This was all done behind me back. If I had known Mick was wanting to ride he would have ridden”. I wish I’d told him ha ha ha. That was a long time ago. From that point I thought I decided I didn’t want to do it anymore.
I believe this rider to be Serge Bacou. www.Retrotrials.com met him in 2012 at Bultaco specialists Romero motorcycles , Barcelona.

Serge is 7 times French motocross champion. He rode the Paris Dakar many times with 13 stage wins and a best of 2nd in 1981.
He also won Le Touquet Enduro Won the  Atlas rally twice  Won the Baja Aragon race.   A real champion in a very hard discipline.
Where are the OW10 twinshock and cantilever machines of yours now a days?

Strangely enough, one of them has just appeared and it’s about 2 minutes from here, near Chesterfield. This guy has one of my old engines. That should have really gone back to the factory, but there’s nowt you can do about it.
There’s another engine in a bike that Shirty’s got that’s ok. Another OW10 we sold to a friend of ours. He used to ride for us in the early years and Yamaha said we should sell him the bike. The only cantilever that’s left is in France now. I’d lent one of my cantilevers to Christine Reyer. He was opening a shop in Paris. We lent him one of my bikes, the cantilever to put on display in the window of this motorbike shop. You know…this bike never returned and then the shop closed down and Christine Reyer disappeared to the South of France with the bike, he kept the bike. We found out just a few years back where the bike was and Yamaha said “Oh, we want the bike back”. Sonauto France took the bike back from Christine Reyer and had it in a museum in a Sanrto France, Paris. Then a Dutch guy had permission from Yamaha to build a replica cantilever. This was permission from the factory. They said to Freddy Brown, you can build a replica cantilever. Freddy called me and said “We had permission to build a replica cantilever” I said that was good. Yamaha said that he could borrow the cantilever from Sonorto and use it as a model. In the meantime Yamaha have sent all of the blue prints to Freddy. He’s got all the blue prints but it’s nice to have the real motorbike. So a friend I have lost his job, or quit it and he was right down in the dumps. He was suicidal. Someone suggested to him that he start a classic bike shop. You could sell stuff for Yamaha. He thought that, it was a good idea and they both decided that it would work as France was full of TY Yamahas, they were everywhere. Anyway, he opened it up and started this internet business and I suggested that they could borrow the cantilever from Paris and he contacted Jean Claude Olivier and he said yes, come and take the bike. So we had the bike on show at the opening of the Jean Marc’s shop, France trial classic. Anyway the bike went back again, Freddy needed to borrow the cantilever so he could build his cantilever. He had permission from Japan. We contacted Yamaha France and they said “we haven’t got it, it’s gone plus two more bikes from the museum. Then Jean Marc became a little more curious and became a detective. He found out and called me. He said “Mick you’ll never guess …Jean Claude Oliver had taken the three bikes and sold them”. They were worth a fortune. Anyway, he’d taken these three bikes, one of them was this cantilever and sold it. We don’t know how much for. Jean Luc did a few more enquiries and we found the bike and whose got it. It’s a rich guy who lives in a Chateux Bear Paris. A big rich guy. He said you can’t take the bike, but you can come and look and we can go out for dinner and everything. So we can go and see it. So it’s there anyway and they said that they were not worried about getting it back, he can keep it because they were going to have one of the replicas. I’ve got one of the bikes in the garage, I can show you later. I’ve got one of the replica cantilever frames. It’s in Derby now having another tank made for it. The Dutch guy is not just building one he’s building three.

What was your favourite bike that you ever had?

There are certain ones. My cantilever cos they laughed at it before I won the Scottish. My James. I love the Ossa. I love them all, all me bikes ha ha ha ha. 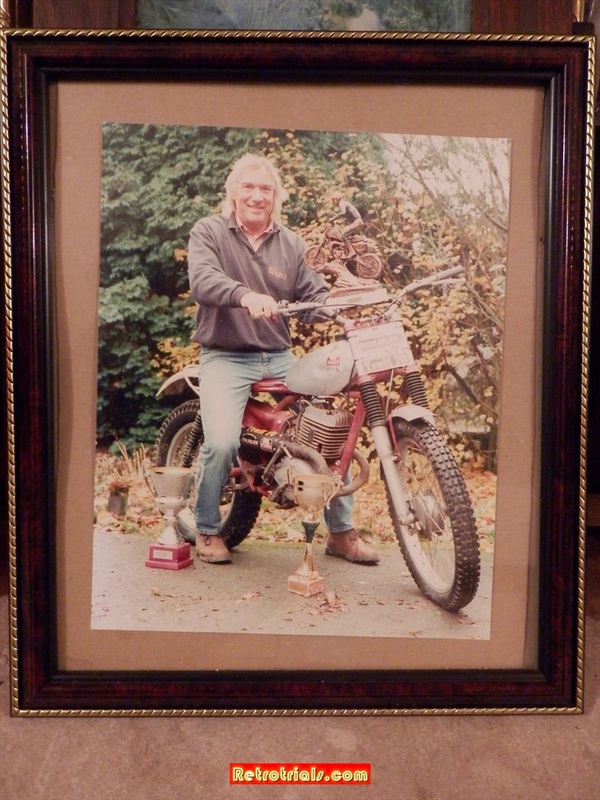 Mick Andrews interview WWW.RETROTRIALS.COM
Kell Corruthers, of the states and all those guys. I used to do trials schools in California and we met some of the film stars. Yvonne de Carlo was a magic film star. She were beautiful. I taught her son. She was a big big star in the early years. Oh, she was beautiful she was. We did things with Steve Mcqueen. I wouldn’t say he was a friend but he was an acquaintance .We rode several times together and I was featured a little bit in that film On any Sunday.