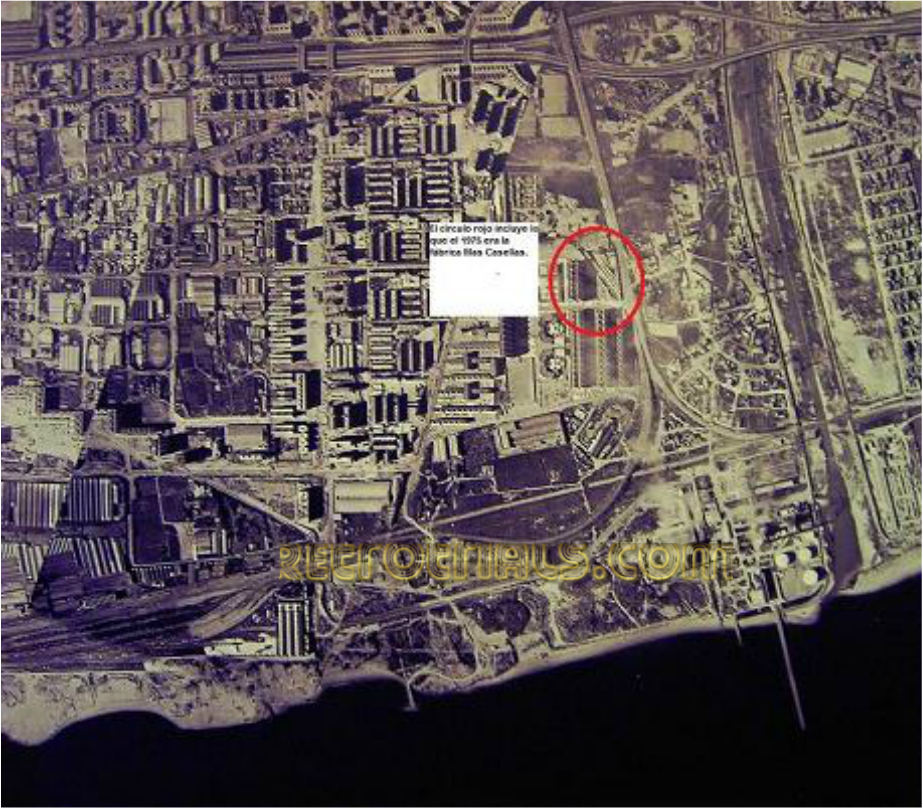 I was there as my father was very enthusiastic as my father loved to talk with his sons and daughters about his work, because for him it was altogether as he grouped the whole thing together. I had a lot of talks with my father and at the time we were living at San Antonio as it was summer holidays. My father was going to Bultaco factory and coming back and I remember one day he come and say tomorrow we are having here Sammy Miller. I knew him as my father had subscribed to motorcycle news. I didn’t know what the text was, then I didn’t speak nothing English. There were a lot of photographs and  I was just looking and the middle photograph was Sammy Miller and he had a big concentration in the paper on him. My father told me Sammy was coming and at the time my father was very passionate about the off road. He had four of them and had a KSS Velocette and with that KSS he had a lot of rallys out on the road on the dirt with friends and he went to Aragon and the Pyrenees. He loved to go off the road with the bike and at the time, in San Antonio he had prepared some special bikes for trials with Bultaco
engines and they were the ancestors to the Sherpa. At this time I was getting bigger as I had been riding trials and was aged 13 or so. My bike was 175 cc engine and the bike was holding pretty well at the time. My cousins were staying with us many times during summer in Antonio, they had 250 bikes ,not really Sherpas, but something that was starting to figure out and look a little bit like a Sherpa .Sammy Miller he come to San Antonio with another rider. He had something on his face. His name was Roy Peplow. I don’t know, it was a mark or a burn on his face. I was young and was fixed on this. Roy and Sammy took out our bikes as my father wanted to convince Sammy to comehere and prepare bikes to win the trials in England as at the times the trial in England was very healthy. There is the Scott trial and Scottish Six Days trial and many other. Very famous trial. Sammy and Roy stay in San Antonio I
think I remember . Sammy come in summer for a couple of days and spend them in San Antonio. He was testing the bikes at San Antonio. I remember he was doing some things very scary for us and very difficult and we were looking at Sammy and Roy. Roy was very hectic and Sammy was a real champion. You could see this when they were riding. After that Sammy talked to my father, they are pretty good training bikes but were a bit unstable. My father say Sammy is contract, do you think you are able to develop a bike to win trials. Sammy say to my father in reverse. “If you are going to be able to do a bike that suits my trials riding I will sign for you to ride your bike. It was like this. After this, in November the same year Sammy come to the factory. My father had telephoned him and arranged this when he had a prepared bike for him. Sammy said “Ok Mr Bulto , very good”. My father called back Sammy and Sammy come to San Adrian and testing for the Sherpa was in San Antonio and he tested it in San Adrian at the
factory. Sammy then come with the bike to San Anontio with a team from the factory . I was too young to say anything, I was just looking. I was able to ride a trial bike but I was nothing to do with Sammy, he was a real professional and just looking. Sammy was testing and saying “that is not enough, that is not enough”. I remember in the night they take the bike to San Andrian and they work on the bike and the next day they come to San Antonio.They next time you come and see me I will show you. Sammy mark a non stop called the rocky section he say to father “ if I cannot get through on my Ariel and I go through on the Sherpa I will sign with you and it was true. With the Ariel it was impossible to go through and he really intended this and try it to the maximum with the Ariel and with the Sherpa he just went around, no problem. The great achievement of Sammy was to ask the technical team for the right things and to put the level where it was neccessary. He didn’t say the head angle had to be 30 degrees or 26, no, he say , this bike doesn’t turn what I want. I want a lighter steering and the technicians would think of this
and make the cages. These technicians were from the factory and my father had been there. 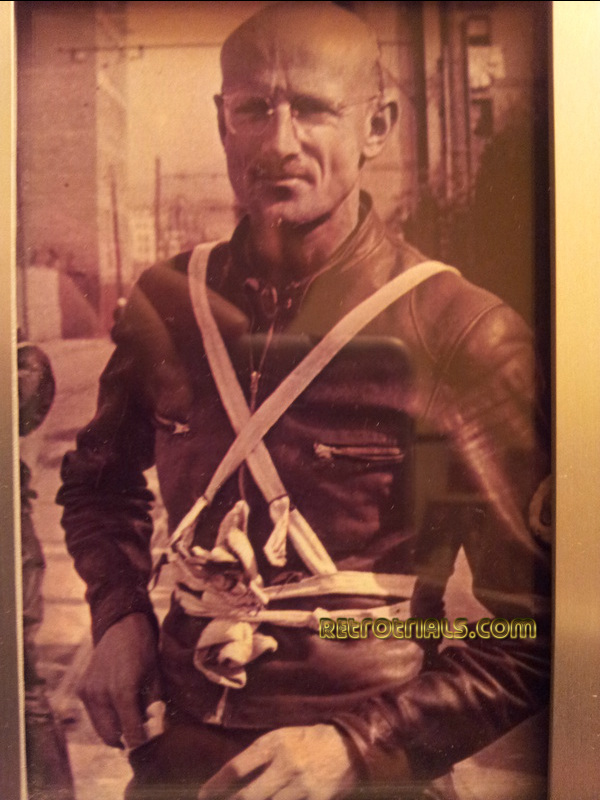 Paco Bulto - Ignacio Bulto interview . Bultaco
How would they all cope with the Spanish English language barrier?

My father was the only one who could speak English. He spoke very good English , far better than me. He was the translater.

Were there workshop at San Antonio where adjustments were made during the day?

Yes or my father would be phoning out the factory and saying, please prepare some clamps, some different parts and they were machining these parts. They all worked together with San Antonio. It was a real big work, but the big achievement for me was Sammy .He just pushed and to excess. 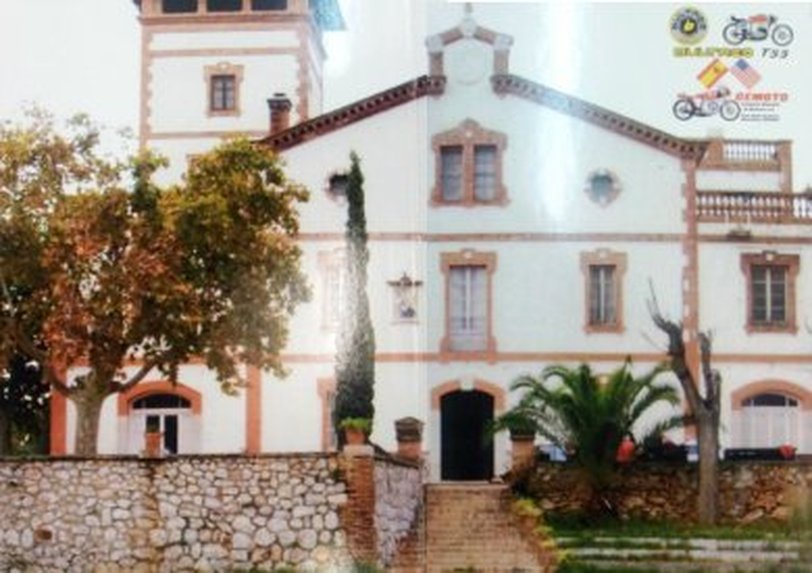 Farm San Antonio. Ignacio Bulto interview
Did your father spend all of that week with Sammy or some of it at the factory ?

No, all at Antonio with Sammy as my father was convinced that if the project was supported by one professional person he had to talk as much as possible with Sammy at every hour about this bike.  They would not just talk about the bike during the day, at supper they would keep talking about the bike and my father would say “Sammy in that place where you have lifted the front wheel, what was the problem “.”Oh yes Mr Bulto, I had to much rebound”. They did a great job as they changed the philosophy of the bikes of the trial. At the time they were just road bikes with 2 different tyres and they would lift the mudguard a little bit. It was from this to a professional bike. I ride some of these new Sherpas then on these days but only after Sammy had finished his work. My father liked to talk to me about everything and about these bikes.  We have worked many times together on new prototypes. I was very young only 12 or 13 so my opinion was not taken always

Is the workshop where they made the adjustment still there?

a rare photo of paco and ignacio together.
Ignacio in the middle of the bottom row 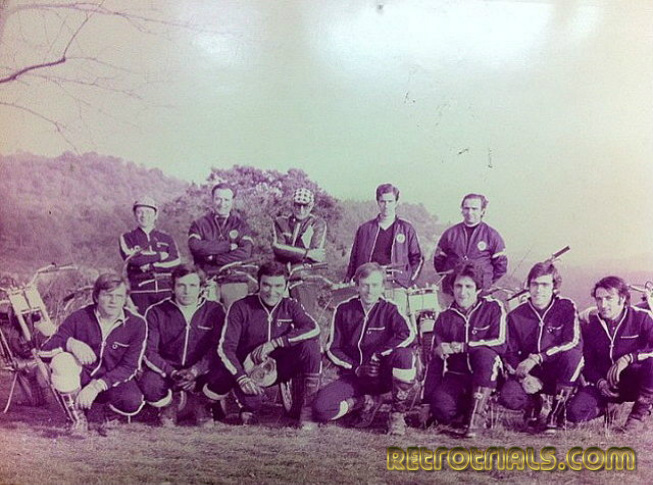 Team Bultaco . Paco to the rear with his son Ignacio to the front in the middle Ignacio Bulto interview
I tell you, My father work when the civil war was finished in Spain, he start with a piston ring factory
that was called Fisa that was in Vilanova i la Geltrú where Fàbriques Marqués family textile company was based. My father put his own business in the same area. This was for piston rings. Then he got a joint venture with Mahle and he was doing
piston rings for Mahle and pistons for the local market for Spain. He loved motorcycles.


He  contacted Mr Permanyer that he was doing carbide machines. When the Spanish war finished
there was no petrol in Spain and then there was some entrepreneur. They were making a machine that you put it into the cars and it produced gas. Mr Permanyer was doing these steps to put into
the cars. At the moment Spain was recovering from the w\y petrol was coming more and more and
more and the business of My Permanyer was going down and down. My father go there and say
Pedro we have to build motorcycle. My father say, you will design and I will produce. Mr Permanyer say “I don’t know, I don’t know”. At the end they started with Montesa,  Bulto Permanyer. If you see an old sign of the marque you will be B and P for Bulto and Permanyer.
My father was convinced that the market will follow the chequered flag. Montesa have a lot of problems with the materials to assemble the bikes and from the first day they were in competition. They win a lot of things and have been also 2nd thirst and 4th in the tourist trophy with the sprint, so they were pretty active and pretty good in competition . At the time some cousins of my mother were studying as an engineer and my mother say to my father, Paco, please can you make work for these young cousins in Montesa who have just stared in engineering . My father say ok, very good and gave them contract in Montesa but these people were a bit maclovelic and they were difficult in character and in one moment the market was not so good. These people have pushed to Mr Permanyer to say to my father to stop the racing department. My father say to Pedro I think we have to continue and if the sales are no good then we have to push harder through the competition . In the end they were pushing Mr P as they had a different view. Due to this my father quit Montesa .


He quit Montesa with a view of leaving motorcycles forever, that was it. It is a pity. He was, I remember, sad. He was usually a pretty happy person and this time he was sad as he stop the competition  He had the ring factory that was going strong and he decided to make more rings and more piston, but the thing is my father a very good friend of his teams and I remember running around the house and I passed the main door when the door bell rang I opened the door, there were 10 persons standing there and I was only a child. I think nothing. At this point my father came out of his room. My father say to me, thank you Ignacio, you have to go and play in another place, the people have come to see me. these people were the technical team of Montesa and they were the people who were in very loose contact  with my father when they were working in the Montesa factory. These people were coming to tell my father Mr Bulto we have to go for another motorcycle factory and you have to be the "Jefe" (boss). If you will be the jefe we will go with you. All of these people had jobs with Montesa but they want to work with my father as they follow him. These people offered and did put their money into the new factory with my father and these were not rich people, they were just normal working people. They were so convinced that my father would make a success of it and that’s the real story. 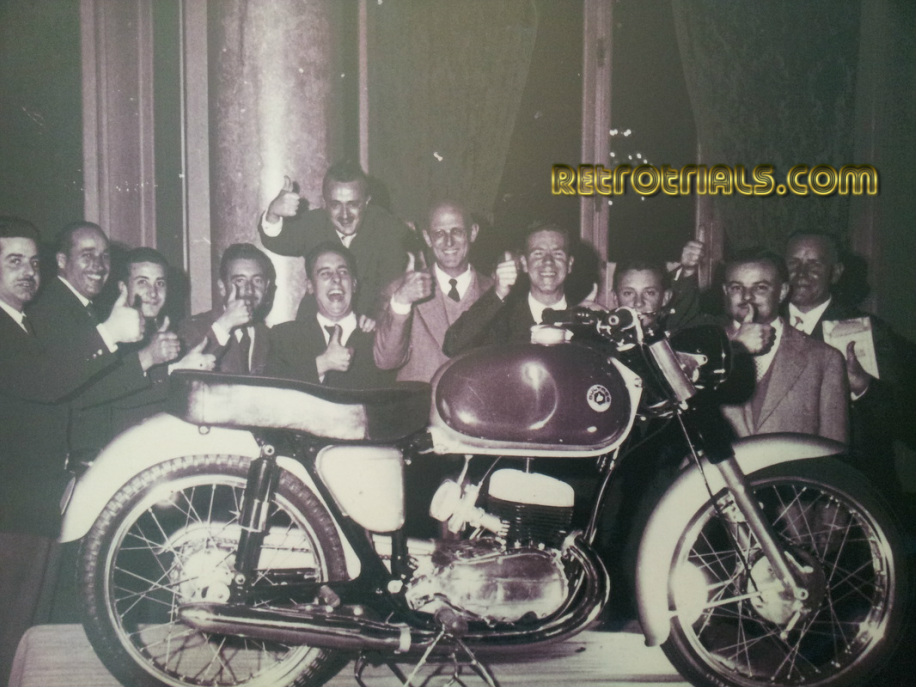 Paco Bulto with the founder members of Bultaco presenting their first motorcycle. Ignacio Bulto interview. All thumbs up 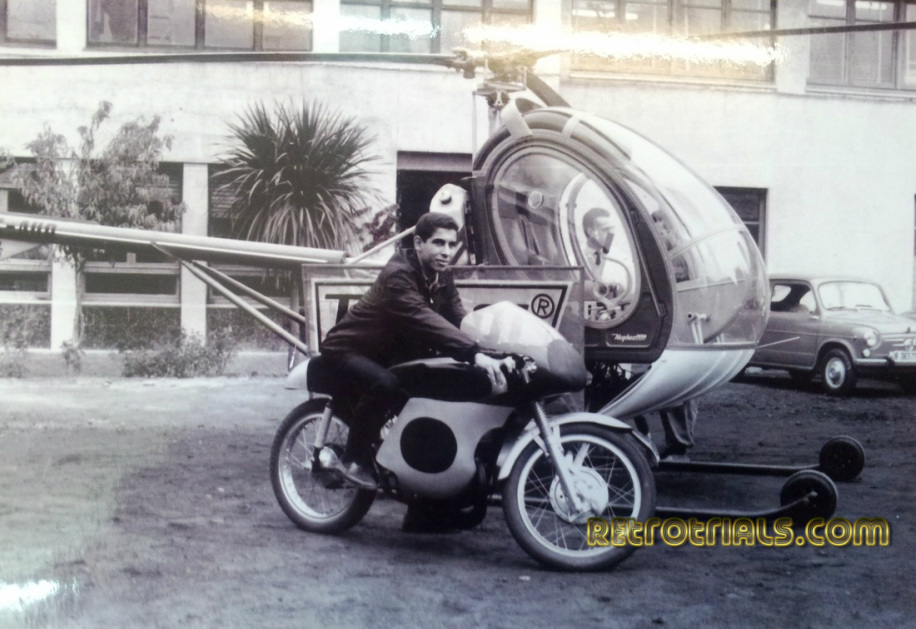