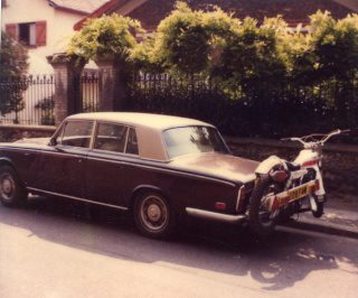 Exclusive Mick Andrews 2014 Interview - Mick's Rolls Royce. Ive been told that after a trial he sometimes would place the muddy Yamaha inside on the rear seats to take it home.
Are you someone who particularly likes the warm weather?

I don’t like the cold but we’ve been used to the warm weather with Japan and Spain. I remember living in Spain, we used to wish it would rain. It was so hot and we couldn’t practise in the day. It had to be early in the morning or late in the afternoon cos it was too hot. France wasn’t too bad as it was up in the mountains. Andon is a ski resort and it’s very very nice. It’s only an hour from Nice, just up the mountain.

You come across as being a very laid back guy Mick, did you ever suffer from pre trial nerves?

Are you suspicious at all, did you have favourite gloves, wear a chain or anything similar?

Where is your favourite country to ride in?

We can’t, no because everywhere we go like Canada it’s wonderful what they do there for us. When we’re in America every state which we go to is good. Spain is good, everywhere. There is no favourite as such. Maybe the favourite country …we love America but…we love Spain  ….but maybe if we had to pick a place where we could live, I don’t know…if we had to move …we might pick France, but America’s done us well, but there’s too many things that can kill you there, you can get shot and snakes and whatever ha ha ha ha every where’s nice, Australia’s nice but only to visit. New Zealand’s nice we might be going there next year, we was there last year, yeah. So no ..everywhere is good.

Are you still in touch with any one you used to ride with on the trials circuit from the European Championship?

No, not really. We see Lejeune occasionally, Eddy and his family cos we’re friendly with those people. The Spanish we see all of the time when we’ve been back and forth and the French riders. I haven’t got any contact with the riders now from the World rounds. Bou no …..tarres and all those guys yes. I’ve met with the Cabestany’s yes. We see him occasionally. 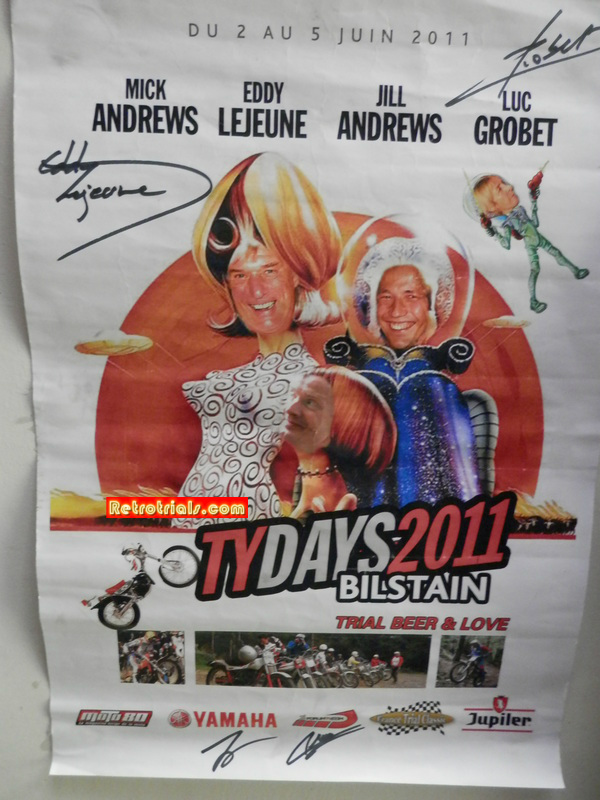 Mick Andrews interview WWW.RETROTRIALS.COM
Jordi Tarres, Tommi Ahvala and other top riders used to come here. Tommi used to put his caravan in our drive and sometimes his Mum and Dad would stay there.
Sometimes when they had their trucks they parked on the field there. They might have parked opposite on the drive as when the house wasn’t there, cos sometimes we would have quite a few vehicles. If the World Round was here, sometimes they would come here to practice. They would park opposite where that drive is now. The riders used to come here sometimes a week before the World Round and get their bikes right and do some practising.
What do you think of modern trials these days?

It’s a different world. I don’t like the way the sports gone. I love what they do and their skill they have is absolutely unreal …but it’s like …I think it should be kept separate from trials as such. That’s a different sport all together. I think that in a way, every time there’s another World Round I think it’s another nail in the coffin for the sport of trials. You can pass the factories now…they’re selling no motorbikes, selling nothing at all. It’s only because it’s how the sports gone. If the sport was left how it was loads of people would be riding the sport. A lot of people are riding the classic trials now. We’re going to this trial in Spain and there will be 250 riders there on classic motorbikes.

Nobody can do this new stuff. There’s only about half a dozen riders in the world who can do it and they are dictating to everything, the federations .They have just let this thing go and no what’s starting to happen no. With the sport as it is today a lot of the guys who are riding can’t do it, so they are coming to the classic which is increasing the numbers. But, no one has got control of the classic scene because they are trying to come to the classic and riding stop rather than no stop “we can’t ride no stop”.  Well don’t come to us then. The clubs should say, if you coming to the classic scene it’s no stop, not with the fancy stop go, stop go and the fancy hopping the back around. Getting control of it isn’t happening and if it keeps going like its going now that’ll finish and go downhill as well. 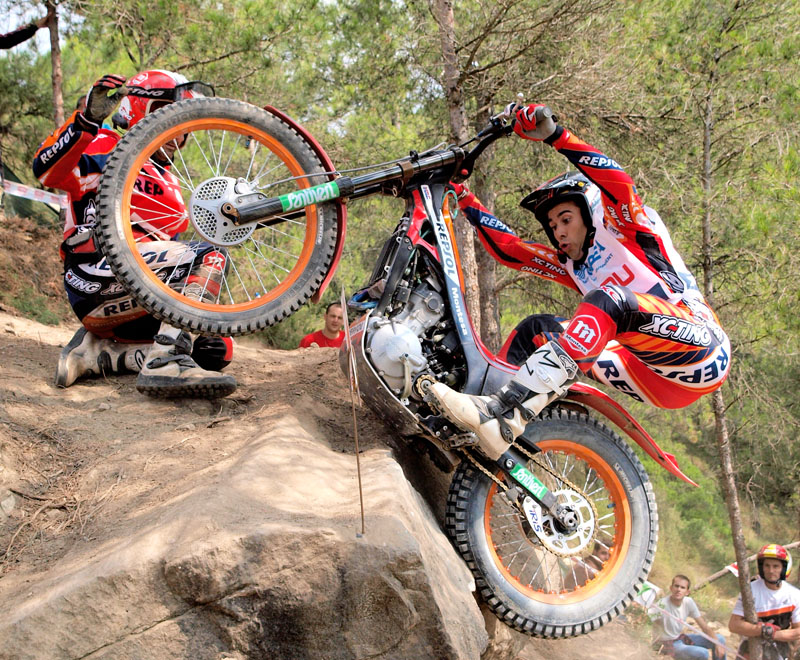 Photo courtesy of www.plazadeportiva.com
What do you think of the heavily modified pre 65 and twinshock machines?

There’s no proper control and it’s happening a lot. You’ve got the fancy bikes coming to the trials and then the top riders, the top few lads saying this trials to easy can’t you make it harder. They’re on the fancy bikes that work like modern  bikes. There are some clubs which don’t like the modified bikes and like it just as it should be so people are turning out on original bikes which is good. My James….we’ve had to lift the engine a little bit, we got marzocchi front works in the normal forks to make the suspension better. The engine is villiers, I’ll give it that. We’ve got electronic ignition. We’ve advanced a little bit but only for reliability in a sense, but some of these other bikes. In the early days I have to say, that as we were getting skill full at this trials thing. There was myself, Adrien Prato, Charles Coutard. We used to go round France giving trials demonstrations and we’d be riding over cars and bunny hopping people. That was the start of the modern trials of today. People used to love that. We used to have an audience. We would have a paying gate. All the federations thought “oh this is ok we can make it a bit like a football match “. We can have a stadium and the spectators and it started off a little bit like that, but now it’s dying off. Once you’ve seen someone rider over a car or over a big thing that’s it. It’s going to be the same with the free style. That’s very popular at the moment. Doing somersaults and back flips, they can only go so far. The spectators now at the arena trials is getting less and now and everything else with the indoor trials and so forth. It’s a pity really but now the factories have no money. They’re not selling the bikes as no one buying the dalm things.