In 96 I understand that you hurt your shoulder?

Yes. In 95, it was a really bad episode in our lives in general. At the beginning or 95 my grandfather passed away, then I think my other grandmother passed away, then the year later my father passed away. Then I hurt my shoulder and I was winning the indoor series just two days before the last indoor world trial. This was just two weeks before the season opening, so I think 96 could have been a really good year for me had I not had an injury and that set everything back and having the personal problems. Of course losing my father was huge. He was a really big part of my career all of the time so that had a really big impact on the whole family not just me. We were also working constantly on the bike and we would have problem with it. The clutch was constantly dragging and wasn’t very free. When we would rev the bike it wanted to go forwards and everybody else the other manufacturers were using needle bearings with a clutch basket and a shaft but the Fantic was using just a little bronze sleeve and that was causing the friction there. We tried to suggest that to the factory. Mauri took me to the hospital once after it had seized up and I had to go get stiches on my leg. It’s just grabbed and it went on its own. I tried to tell my mechanic Fabio that why can’t we build a clutch basket that has a bearing just like everybody else but seeing as it wasn’t his idea it can’t be a good idea and there was kind of a big battle. I even went as far as machining my own basket with the bearing and it worked but still be wouldn’t let me put it on my bike. Well then at the indoor the sleeve seized up on a third gear full revs and I just launched myself into the obstacle and I dislocated my shoulder and I just remember that phone call that I made to him.
Tommi watches as Fabio and another Fantic mechanic work on his Kroo 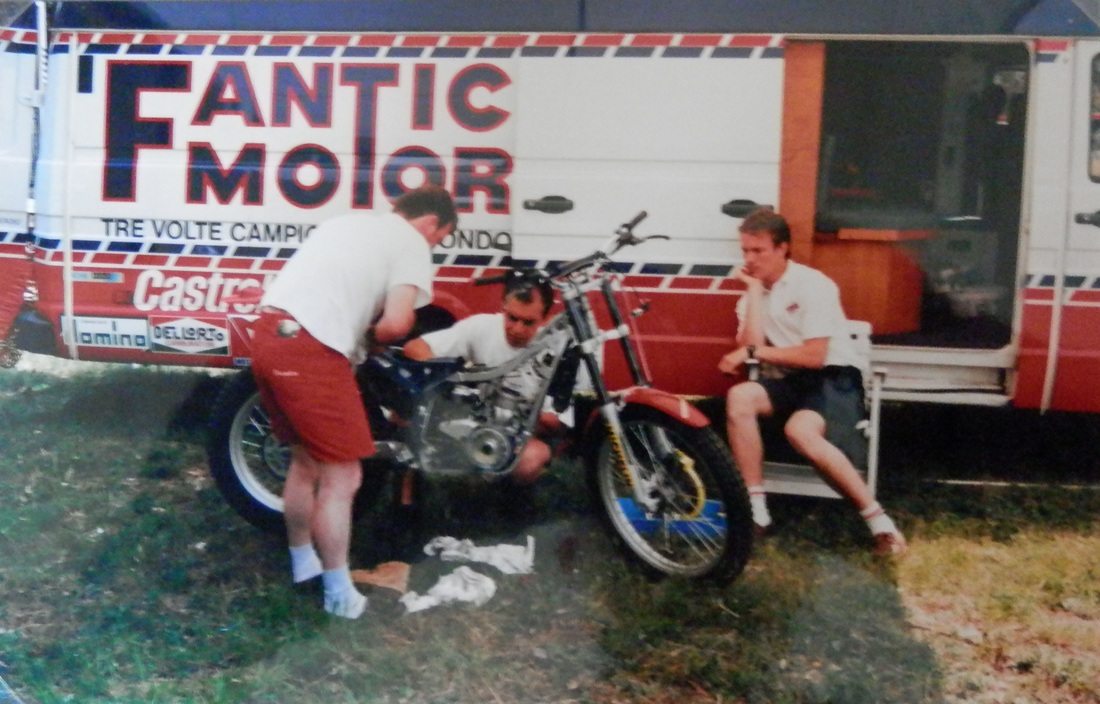 Just poor management. They were still doing pretty good but the designers were getting old and they didn’t know what was going on in trials and of course they were starting to have money problems and money was just flying out of the doors. If you went there at the weekend three lights would be on full blast, doors would be open and heating would be on full blast and all the machines plants still running. They were just wasting money, no management, nobody cared really.  I remember they brought this engineer from enduros to design a new trials bike and he designed this new bike but of course it didn’t work. The tolerance was plus or minus 2 cm ha ha ha so then if the handle bars were plus or minus two centimetres that was in the tolerance. We said that it might work on the enduro but in trials it doesn’t quite work in this way. It has to be a little bit more precise. He built his own prototype and of course I couldn’t do anything with it. He didn’t tell me, he told Fabio “he just doesn’t know how to ride that bike”. Fabio told him “that guy is a World Champion and number 2 in the World at the moment. I’ll let you tell him that you don’t know how to ride this bike “ha ha ha ha ha. He never told me this ha ha ha. He brought people in who didn’t have any idea about the bikes and with them having money problems it all started going downhill.
Photos taken in 2009 of the Fantic factory - now in 2013 it is mostly gone and modern industrial units take its place
Fantic made other bikes as well though?

Yes, they built some enduro bikes and 50cc bikes as well. At the end of 96 you started to see a lot of money struggles and I was complaining about the clutch that it didn’t work the way I wanted it too work. This engineer was from the 70’s and he said “this clutch works perfectly”. Finally after a couple of weeks I managed to drag him out of the factory from his office to show him a demonstration as he couldn’t understand why the clutch was not performing. I said why don’t you come out so I can show you. Fantic had a really nice set up. In the front yard they had rocks and steps and all that. So I went here and started riding the normal stuff. Front wheel against a rock and he was shocked “that’s not the way you’re supposed to use that bike. That’s not trials, it’s completely different, that’s not how you ride the bike, that’s the problem”. Ha ha ha ha ha ha. He was stubborn too. All the people there were stubborn. How you try to reason and explain to people like that with that kind of mentality I don’t know. Fabio had his stubbornness but he was still a really good guy and we would kind of work on our own.

It was kind of sad. That’s why you go to the races to develop the bike, so that the customer would have as good of a bike as possible but we tried to hide all other development that we had done on our bike as they would get mad and definitely not get a production bike. After a while we stopped caring and didn’t tell them anything. We just told them the production bike was good and that’s what we were riding. It was a bit sad as it took the whole point away of having a race team as they are there to make the best bike possible.
The Fantic section brochure  -  The systems and personnel wouldn't allow the experience gained on the World Trials campaign to be fed through to this machine .
After the K-roo you then started riding the Fantic section which was black prototype?

Yes the prototype worked really good. Unfortunately the production bike wasn’t nearly as good as the custom bike I had built. Everything worked really good actually. At the beginning of 97 they developed the aluminium framed bike and I remember the first test we did with it I jumped down a step which was a little less than 2 feet tall and the bike got about an inch and a half longer so the frame was stretching. The designer said “it’s only an inch and a half, that should be ok”. I sad “that if I five on these steps in an event I will add about 10 inches by the end of the day, so what do we do then? “ha ha ha. To make it stronger they built it heavier and heavier and it wasn’t that good and at the same time the company was running out of money and I think Fabio wasn’t getting paid, the usual story so he didn’t come to the first world round and I remember we broke our foot pegs and actually the Lampkins gave up an old set. A lot of guys pitched in and gave me handlebars, levers, but of course I felt that this wasn’t the way to go so then I started to look for alternatives. Luckily Honda France and Honda Europe were kind enough to put some kind of deal together to help me out with Montesa , that why I started to ride the French Championship. I got the bike and help from them as well, so it still worked well.
Did you ever go to Adrian Prato’s trials school?

No, that must have been earlier or later. He had trap clothing.

Belgium was the first World Round and it was just me and my brother and a completely stock bike. Colomer had all his team and all the tricked out bike and I think I beat him or was leading him after the 2nd lap so we were kind of laughing and thinking it’s not down to the bike, you have to ride. That bike I really liked it. For a completely stock bike its good. We had some problems with the Montesa team as well. Ciera didn’t like me because I think 94, whenever Dougie won his world title they were going into the last event in the indoor series. We had a speed race and I was against Dougie. It was fairly difficult speed race and if I just finished that section I would have been placed ahead of Dougie and Marc would have won the championship. Well I fived the section of the first step, not because I wanted to I just happened fived it. It looked very obvious from outside that I wanted Dougie to win as I took a five on a fairly basic section, so Cierra got really mad at me as they thought I was on Dougie’s side and in reality I had nothing to do with it. I wanted to win and I didn’t care about any other rides result. When I went to the factory in 97, they remembered this happening and they didn’t want to help me that much. After the season and we got to know each other they started to help me as well but at the beginning it was kind of rough.  At that indoor you see that they came over to me and challenged me but I explain that theory was wrong and I was just trying my best and got a five.  They were angry and it was understandable and it looked pretty obvious as everybody had cleaned that section. My calibre of rider should have cleaned that every time.

Did Yommi have a family at this time or was he free and single?