We'll continued with the interview soon , but weve just arrived at Tommi's folks place.
Ok, were here .......at the place the Tommi Ahvala story began......his family house. Tommi's mother Marja- Leena Ahvala still lives here but unfortunately Tommi's father Jourko died many years ago. The house is really unchanged since then and really since Tommi was a young kid growing up here.  The house has two sections. The first section is a traditional Finnish pretty house, then to the rear is a large brick built extension. When Tommi was a lad, his grand parents lived in the main house and his Mother, Father, Jommi and he lived in the rear part. This is the garden where Tommi started on his skills.
Jommi lives here now with his wife and young daughter. It was a pity but he wasn't around when we arrived as he was away with work. Now, if your wondering what the vans and mini buses are for, well Jommi has been running a transport company for years and he just parks some of his vehicles at home.

The curious part here, this is where I’ve been living all of my life, my grandfather used to live here. My parents used to live here as well back in 73 they built their own house in the back and this is basically where I was born. I was born in the red building at the rear. It used to be my grandfather’s place then us. They when my grandfather past away my brother moved in here with his family and my mother lives here at the front in the house. My brother has a charter bus company so you see these buses are his. The neighbour boy, he converts buses also and he goes to parties and all that. The bus you see here, the single decker that was one of my crazy ideas when we decided to go to the US. You have to remember that this was a time when internet wasn’t really there yet. I didn’t know anyone in the US. I knew Dale a little bit but I didn’t know him at all. I just knew I had to go to the USA and do shows. The question is, I don’t know anybody who built anything for me there. I decide that I have to build everything here, I have resources here and then I ship everything to the US and I’m ready to go ha ha. One day I came home with that bus and everybody looked at me and said what are you doing? I said I’ve got this great idea….  I’m going to build this into a motorhome and build a show set up and I’ve got storage underneath and I put that on the ferry and ship it to Florida and it will be waiting for me and that’s where we can live and we can do shows out of that. So I busted my ass building that for 2 months making that into a motorhome with a show set up on top. We never tested it. It wasn’t tall enough that we’d want to ride on it so we built a scaffolding show set up above and it lots of room at the ramps and hopefully it will work. We then hurried it to the port and we shipped it top the US. We picked it up in Jacksonville, Florida.

It found its way back home to your neighbour’s house ha ha ha?

It was still registered in Finland and with US laws I could only keep it there for a year and I had to ship it back. Was that a smart move? I don’t know. Was it pretty much the only way I could have done it? Yes. If I had gone there I had nothing and didn’t know anyone knowing now the resources it would have made a lot more sense to but a local motorhome. It would have been a lot cheaper, I could have saved a lot of money but I didn’t have the resources. Everyone was travelling there with small motorhomes with the trailers and when I showed up with the bus and the set up was way bigger than anybody else it made an impression that this guy is serious and that was cool as it was way bigger than everybody else. So I sent it back here. My mother kept yelling at me as it took up room in her yard and it was sitting here. I tried to sell it to my neighbour boy here and he wouldn’t buy it. Well then I managed to sell it to someone who rode go carts and he bought it from me. Then it was for sale at some RV store here. From them it went to a leasing company that leased it to rock bands that go on tour. Some rock band totalled it and they went off the road into a ditch. It went to the insurance salvage yard and the guy next door bought it from there and brought it back. I tell my mum that she got it out of her yard but its right next door now ha ha ha ha ha. It’s found its way mostly home again. 50 feet away.


You mentioned that you have some Fantics, which ones do you have?


Soooo :) Lets have a look around  and see what we find. 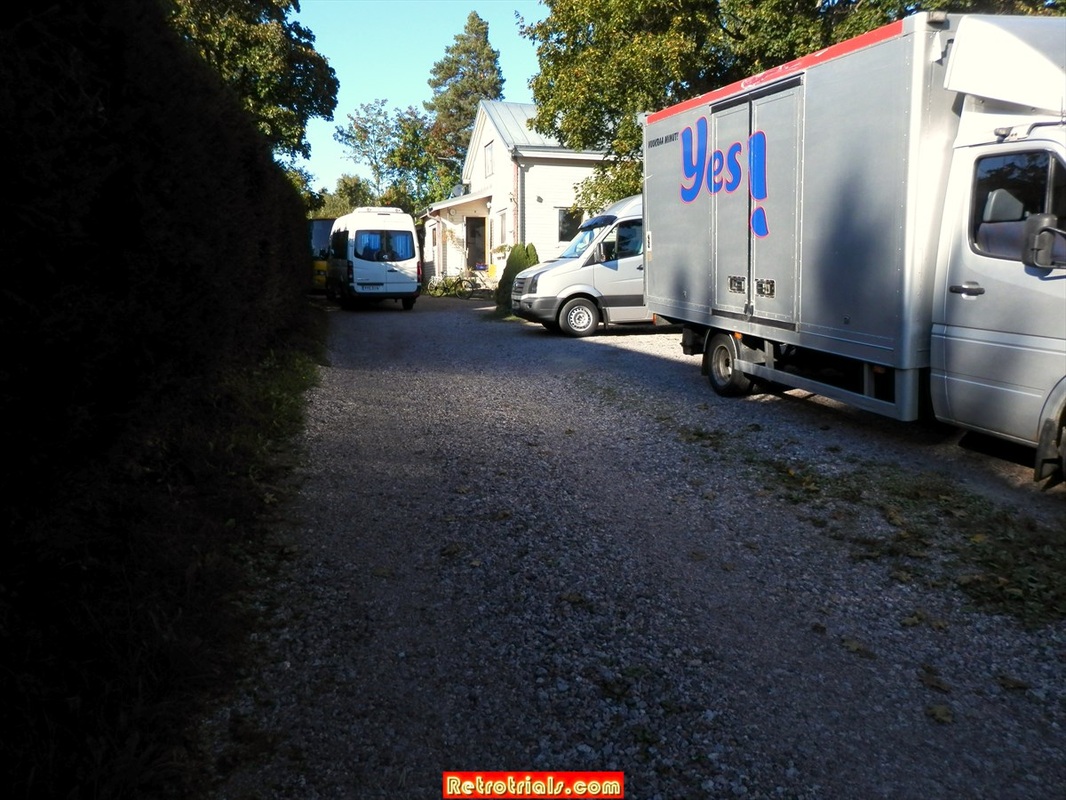 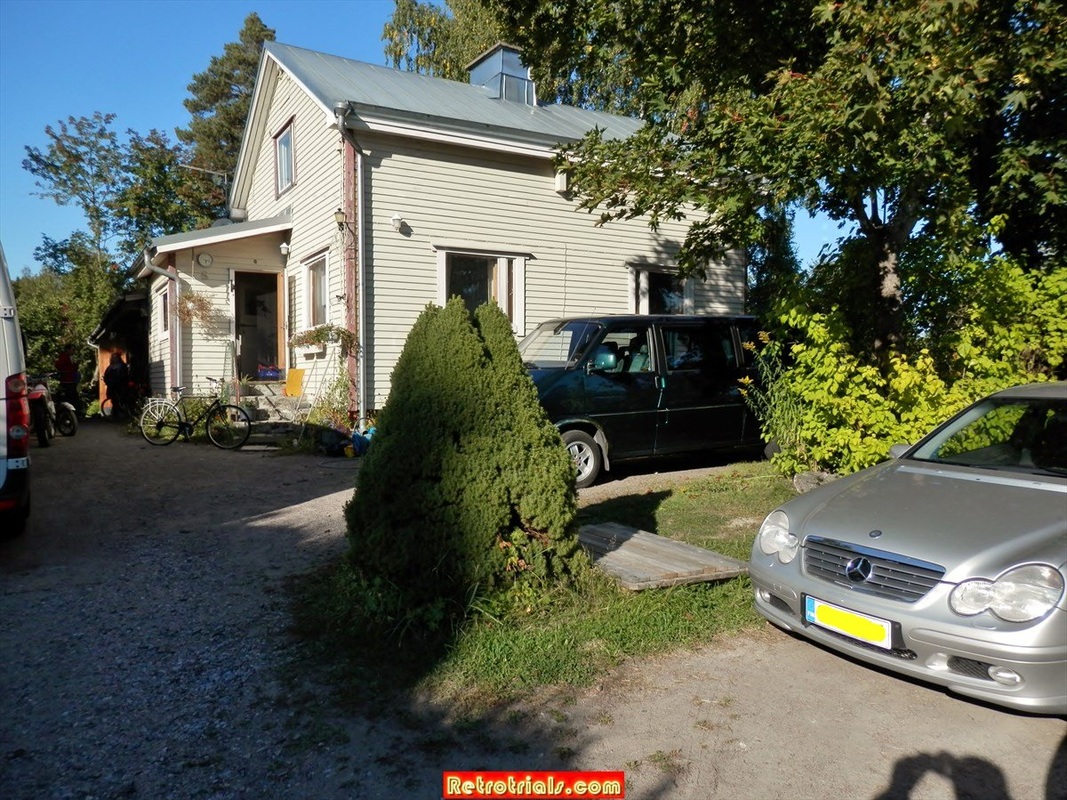 2013 Tommi Ahvala Interview WWW.RETROTRIALS.COM
Meet Tommi's Mum, Marja-Leena Ahvala. As we rolled up in the van Mrs Ahvala cycled past us up the driveway on her old traditional big wheeled cycle with her shopping swinging from the handlebars. We said hello and Mrs Ahvala welcomed us to her home and then pulled out this huge trophy and said to Tommi "You will have to take this, I have no room any more".
Mrs Ahvala is superb with the camera.
People in the Finland trials scene all know that Mrs Ahvala will always be carrying a camera. 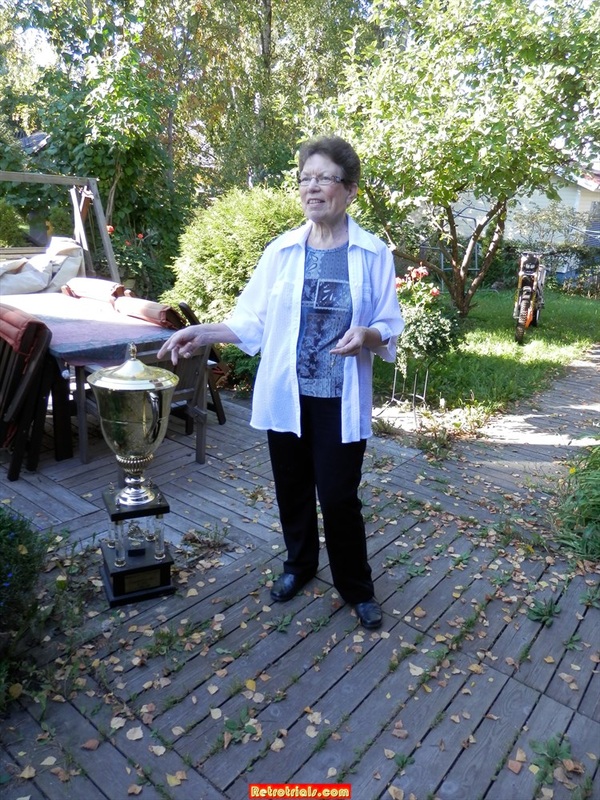 2013 Tommi Ahvala Interview WWW.RETROTRIALS.COM
The newist addition to the Ahvala family is called over by Tommi. This is Jommi's daughter. His wife was here with her, but she was really sure I didn't take any photos of her :) 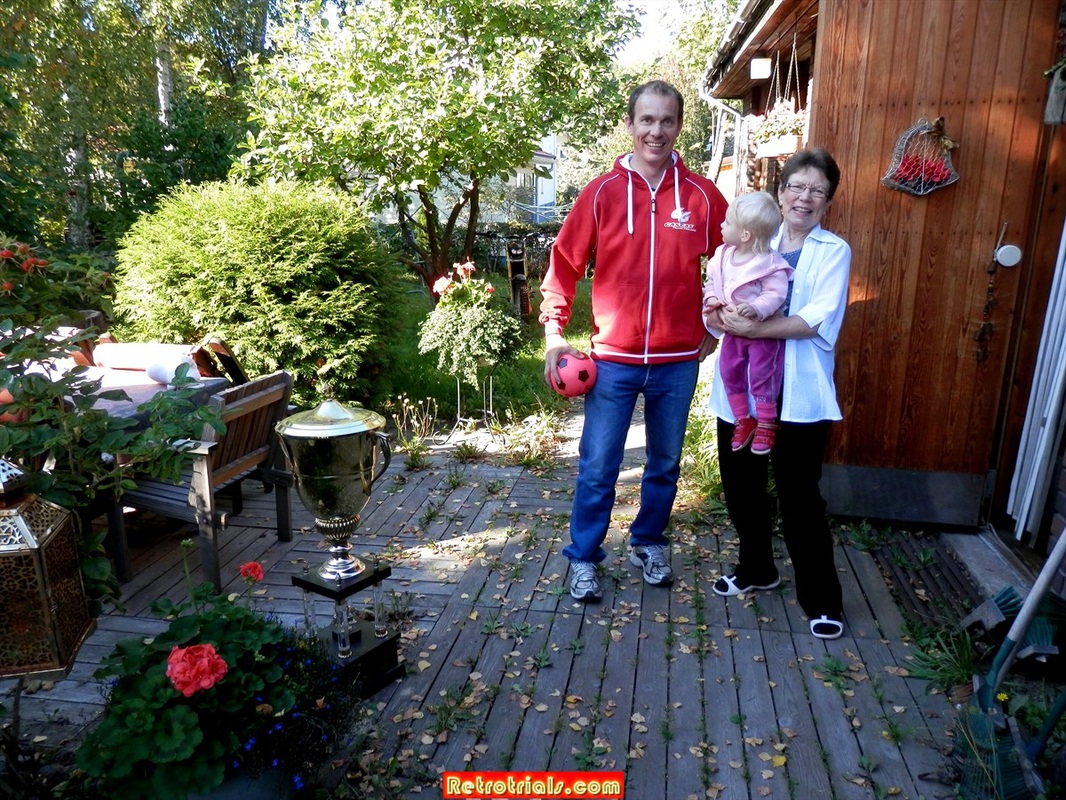 2013 Tommi Ahvala Interview WWW.RETROTRIALS.COM
Family names on the door of the rear extention to the main house. This is where Jommi lives now with his wife and child.
Fun on the driveway. Bikes, bikes and more bikes :)