I know it was a successful bike but it wasn’t a full professional trials bike. People would say “oh it hasn’t got quite enough ground clearance for the top trials riders “. Really we weren’t bothered about the top riders we wanted to open the market. We were selling lots of bikes so it must have been right. Anyway, we made a more professional type bike and we lifted the ground clearance and did little things on it, angled the shock absorbers, made new tanks and it was such a big job that Shirty said, why didn’t we have a frame made so this is when we had a frame made by Godden, the grass track man. He made the frame and it was easy then. We just bolted everything to the frame and you have a second generation to the majesty. I don’t really know which is the true majesty in a sense. 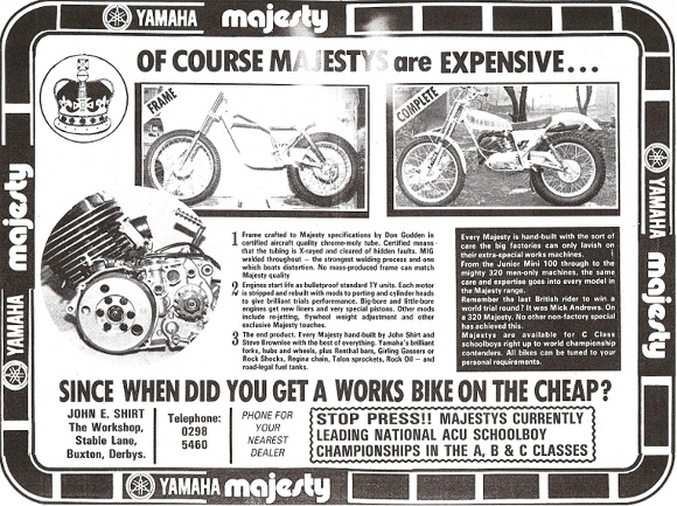 Mick Andrews interview WWW.RETROTRIALS.COM
I would imagine the true majesty is the converted Yamaha and the second generation majesty is …….I don’t really know. There wasn’t that many made …only about 700. They were very nice. We tried to copy the ow10 tank that was on my factory bike with rounds sides and that was the  plan. I’ve got one in my shop now, cos I’ve had some new ones made a few weeks ago. Because it was so expensive to do that way the majesty was flat sided because it was easier to make it. Yes, they couldn’t make the true shape of the ow10 tank. That was interesting. As I say we always been friends with shorty.

Were you heavily involved with the majesty project?

Yes, I worked a lot with Shirty, we did and the guy that used to put all the bikes together. Steven Brownly. He visits here every week.

Were you involved with Aprilia as well Mick ?
1972 - Christian Reyer with the first Yamaha ever to be seen in trials. 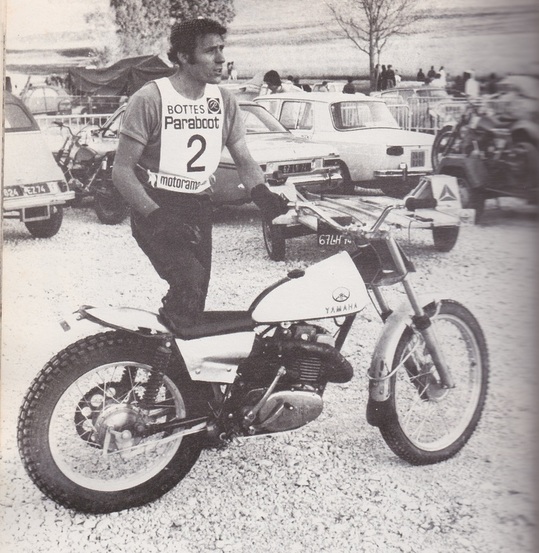 Was it the air cooled Aprilia?

What is the best thing and the worst thing about your riding?

I was the first one to use the floating front wheel technique and they used to come to me, Bernie and Vesterenam. I’ve taught quite a few of the World Champions different techniques. Jordi Tarres and others. They used to come here and used to ride up behind us on the land.
It was more important for the Spanish and the Japanese. So all our life has been abroad so all these blokes like Adrien Prato, we’ve been friends for years throughout our riding days and everything. Adrien said “oh Mick you can come and work a couple of months a year for us at the trials school. It was good, we enjoyed that, yeah yeah.

Where would you stay when you were there?

When people went to the happy trials school at Andon, did they stay on the land in the farm house or like you in a hotel?

This photo was taken at the Andon Happy Trials school in 1982 . In the photo is Mick with  Adrien Prato, Polo de Gubernatis , Joel Descuns and others. 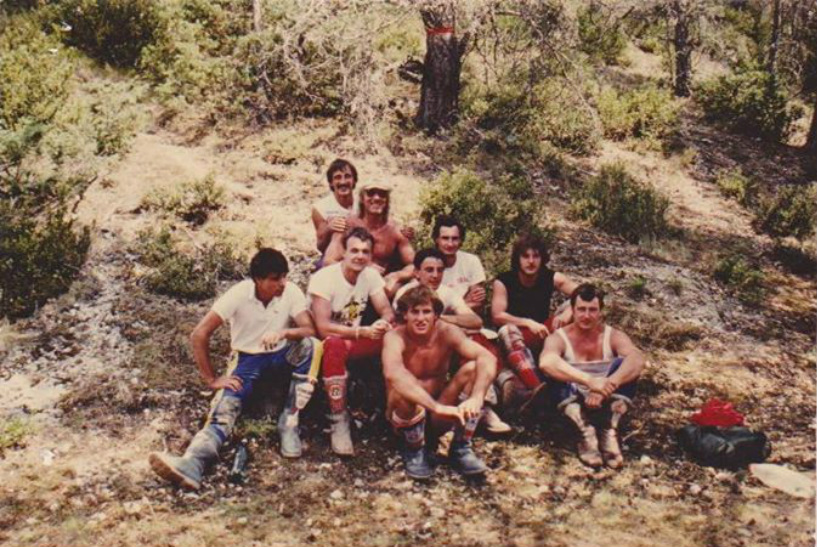