All of the Spanish trials industry is based in Catalonia and you live outside of this region and you were riding an Italian bike. Did this effect in any way the support you got from the Spanish fans?

No, no because Montesa was not in the best time of their lives, Merlin was also going down, Gasgas start in these days, no never. Also because the people who bring the Beta and Fantic to Spain were very popular for trial, never.
Did you have a good relationship with Miglio?

Yes, very good. We used to travel together with the motorhomes, well not in those days a little after, yes, with his wife as well. Yes I stay in his house for a few days when I go to Italy. He is a very nice guy.

In 1995 when I return to Beta I liked the bike and liked the team and we have a lot of indoors and it very easy. Go to the races it was not fantastic as it was an Italian team and they have a very good Italian rider, they have their own way. It was not like working with Trueba. In Beta I felt like I was at home with Fantic no. 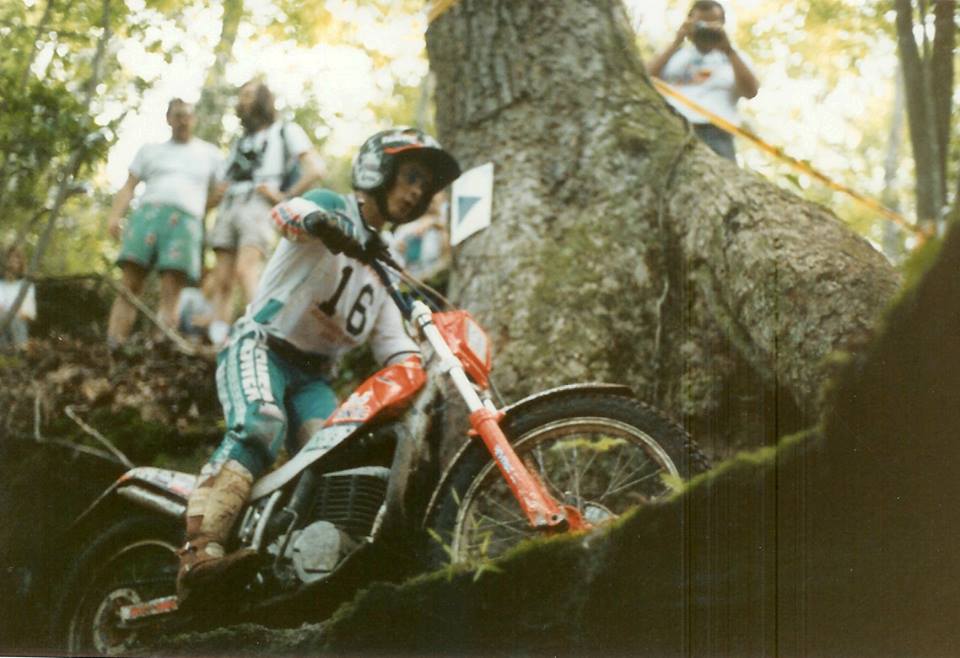 Photo credit to Matt Liberatore Amos Bilbao Interview WWW.RETROTRIALS.COM
So what happened at the end of your Fantic days?

I had not been paid and in those days they were planning on launching their new bike which was not good. The K- roo, maybe. I saw the prototype and the prototype was much better than the production bike and the one they build after, it was nothing like the prototype, you know. It was a big bike. Also in those days I was growing up and Gasgas make a very good offer and also Montesa and so I test both bike, the white Gasgas and the 310 Montesa, I think. I make those tests with Pedro Olle. I test the Montesa and I test the Gasgas cos we want them close together to make the choice. It was a very difficult choice. It was much easier to work together If I move to Montesa that if I move to Gasgas as in Gasgas there was Paxau and other people, so if I move to Montesa it was much easier to bring Pedro Olle with me, but in the end when I test both bikes the difference at that moment was massive, Gasgas much better so Pedro Olle say “hey, looking from the outside from that I say there is no choice, you must take this bike”.

This first Gasgas I ride with, I remember now is green, yes this one.
On this 1991 brochure you can see Amos wearing a special blue and white Ducados riding top. In actual fact , this is not what it seems. The manufacturers didnt have the top ready in time for this photo shoot. An artist had to be employed to hand paint a riding top to make it look like the finished article - strange , but true :)
Amos here , exactly at the moment he chose to ride GasGas. You can see someone has given him a jacket to cover his Fantic riding gear. He was riding his Fantic  at the Indoor trial earlier in the evening at the same venue 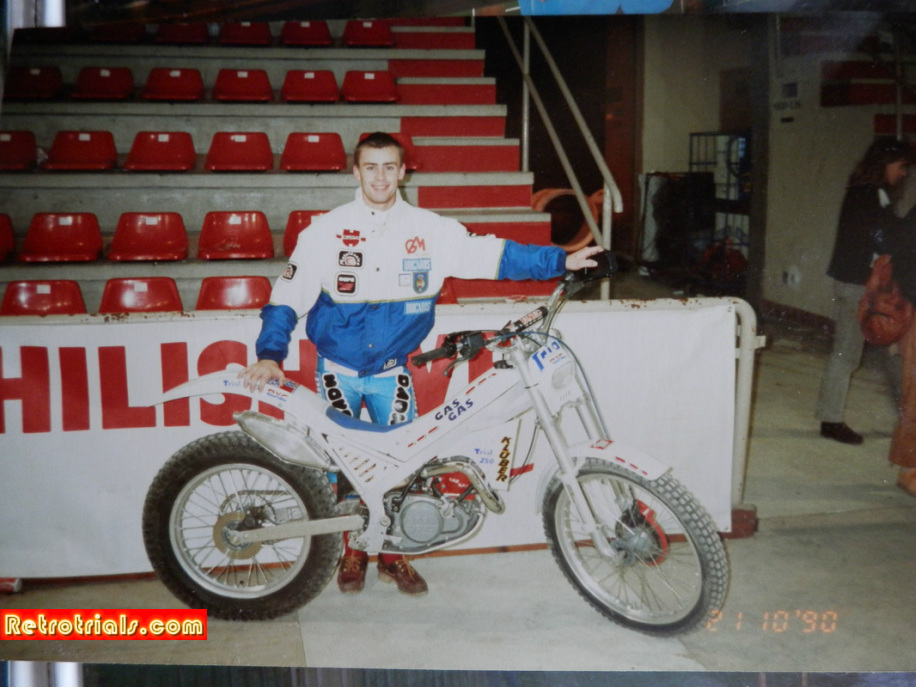 Amos Bilbao Interview WWW.RETROTRIALS.COM
I start with the hydraulic clutch in 92 the first World Round with a red bike, I think it was red and white. I was very pleased with the Gasgas bike. At that time I have Salva Garcia as my minder after he works with Jordi and Colomer and I was growing a lot with that bike. In 91 I finish not as good as everyone expect 6th. In 92 I won 2 races and also I was strong in the Spanish Championship so I was very very happy with the bike. The bike was meant for me.
These are photographs from 1990 showing the watercooled GasGas prototype , that paved the way for
GasGas's major Worldwide success.
This motorcycle was developed primarily by Josep Paxau in conjunction with Andreu Codina and Lluis Gallach
You won your first trial at Kiefersfelden in Germany. Please tell me about this race and how it went well for you?

I don’t know if Berlatier was on the floor but he realised that he had no chance.
After joining GasGas , Amos helped to develop the GasGas range with Josep Paxau 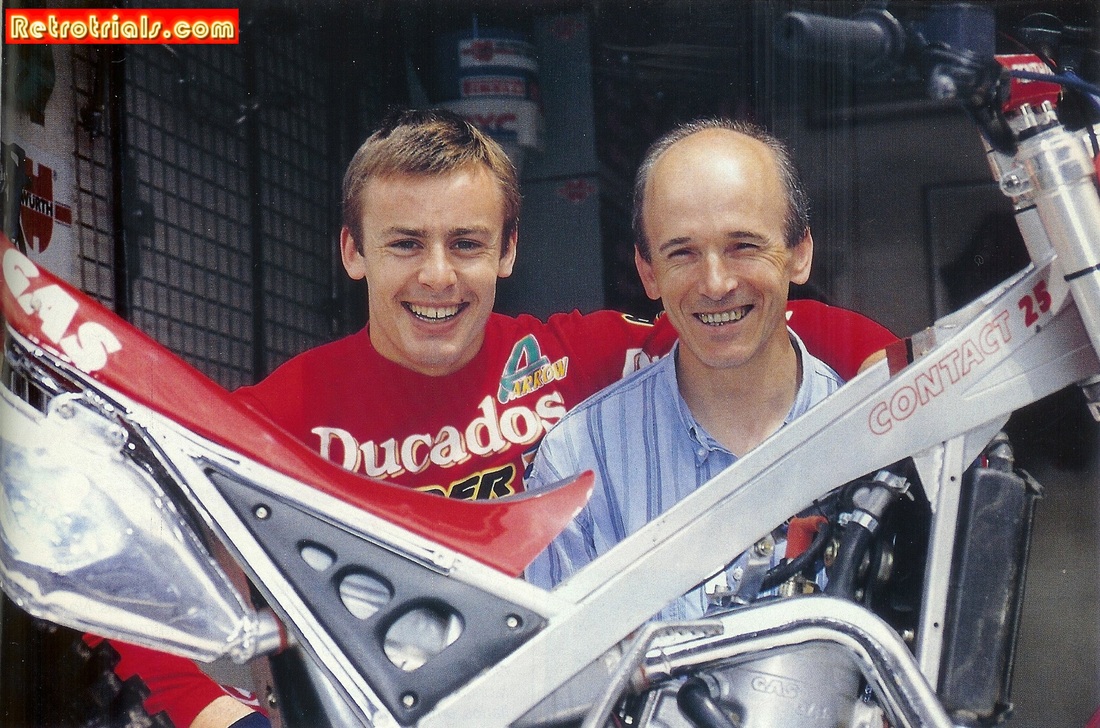 Amos Bilbao Interview WWW.RETROTRIALS.COM
I remember that everything happened very easy. I was riding very nice. We finished after the first lap and I was leading. 2nd lap I was leading.


Did your confidence improve after this win?


3rd lap I was short on time and I remember flat out on the road and I almost have a very big crash with one car. I was very very very lucky.

It must have been bad because I can see your face now and also because you can remember it !!

I was on the road. I don’t know what happened but one car came towards me and I had to swerve fast to the other side of the road to avoid the car. I was very lucky. I remember that place because I like a lot the apple strudel ha ha ha. I like this town a lot. It was a good place for me. Everything happened good. It could have happened at another race but it happened at that one.
These photos were sent in by USA Trials rider and enthusiast Hap Oswald. He visited the GasGas factory at Fornells de la Selva in 1991 and took these brilliant photos recording the moment
What was the most memorable time of those years Gasgas?

I remember a lot about the travelling. We travel a lot together with the Montesa people and go to the same places. We go to the USA and we stay here for 10 days. Let’s go to visit New York, let’s go to Niagra Falls, let’s got to more places. We go to the race yes, but we fly in on Tuesday and after the trial we stay for 3 or 4 days and more or less everyone else was there with us. I remember this. For example with Fantic this never happened. Trial was in Belgium and I go on Thursday and then back on Sunday afternoon when we finish. It was nice to have time to look around and see the World. The good thing about these days is that I have time for this. I was having fun, I was riding good, getting paid and also  enjoying. We go to Czech Republic and we drive most of the time and after the trial we go to Prague and then stop in Vienna and then go more places as well. Everything was more relaxed. The races these days….no one makes this. We go to the races and then back home.
Whilst we have some holiday , lets go on the rollercoaster 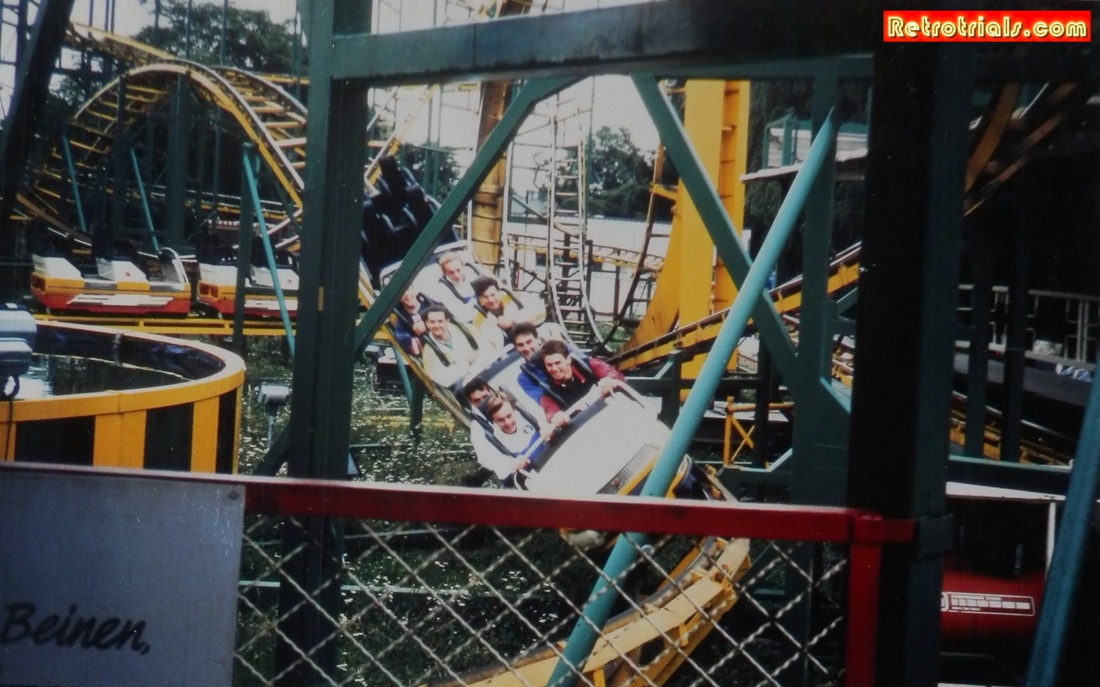