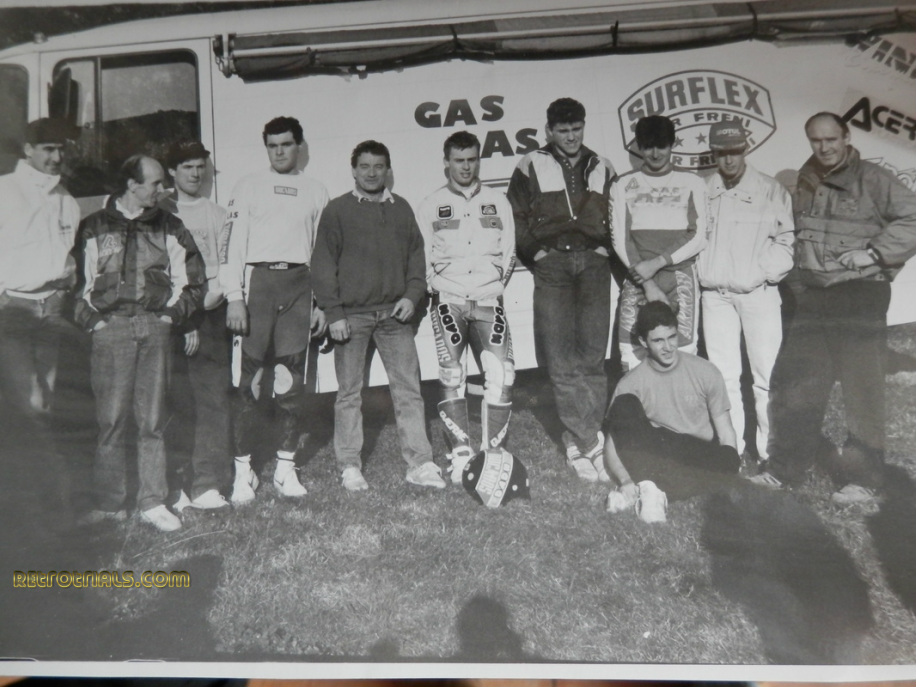 Amos Bilbao Interview WWW.RETROTRIALS.COM
You then leave Gasgas at the end of 92?

Yes, they start to talk with Jordi Tarres. I think Jordi Tarres start to talk with Gasgas and Pibernat about making a team, because I think things are not very good with Beta, this is my opinion. He has this big team that he has. He talks with Gasgas about the possibility about using their bikes. So it was a surprise. This would have been outside of the factory team. The factory team is me and Jordi would have his own team and he is going to use Gasgas bikes. After they make a kind of an agreement against my minder Salva and my mechanic, Ramon and Paxau. So it was like “Hey,what’s going on?”. 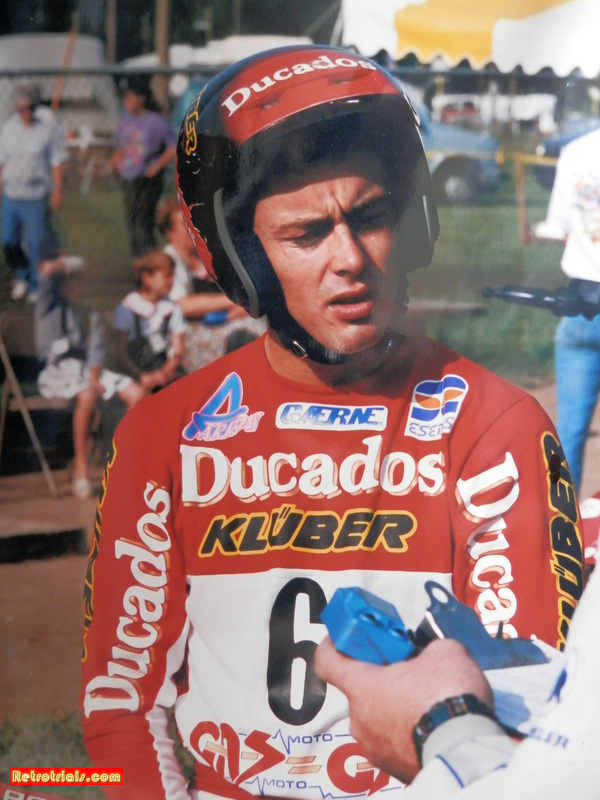 Amos Bilbao Interview WWW.RETROTRIALS.COM
With my minder I have a very good relation but the money was “hey, you have to go”. You cannot stay with me if he is offering you that money, go. He also get the mechanic and then like Montesa also contact me and it’s like hey, it’s the end of the story. I move from Gasgas because Jordi get the people that work with me. So it like ok I’m going to stay in the factory team but I need to find a new minder, a new mechanic and everything was happening.
If this has happened before, what is going to happen next ? Would this be the bike or no. He was the World Champion and he was doing very well. I was growing up and he was on the top. It was like “Hey, no way I stay here”. It’s like he’s going to have a bike as good as mine or maybe better? He’s going to get the best things from the factory and anything that he wants. I was not going to get the good things from the factory. My mechanic is now working with him and my minder is now working with him.
Then you left GasGas you start with Montesa on which bike in 1993?

For me in those days this was a good bike. It was bigger than the Gasgas but my bike was quite special. I have many lighter parts and I was happy with the bike. In 1993 we were very lucky because I go to test the bike in Japan at the end of the year in 92. The bike I rode compared with the 311 that Colomer rode very well. I like this bike much more, it was lighter and we were very lucky because we make one whole season with just one bike, with one frame and two swinging arms and one exhaust. It was like nothing went wrong that year, nothing went wrong. That year was the best year about money. Montesa with the good results and also because of Ducados Fortuna with a small bank in Santander and with the clothing.
This is one of Amos's favourite photos of himself , riding the deep water sections which he enjoyed. His minder is the experienced rider and World Trials winner Gabino Renales. 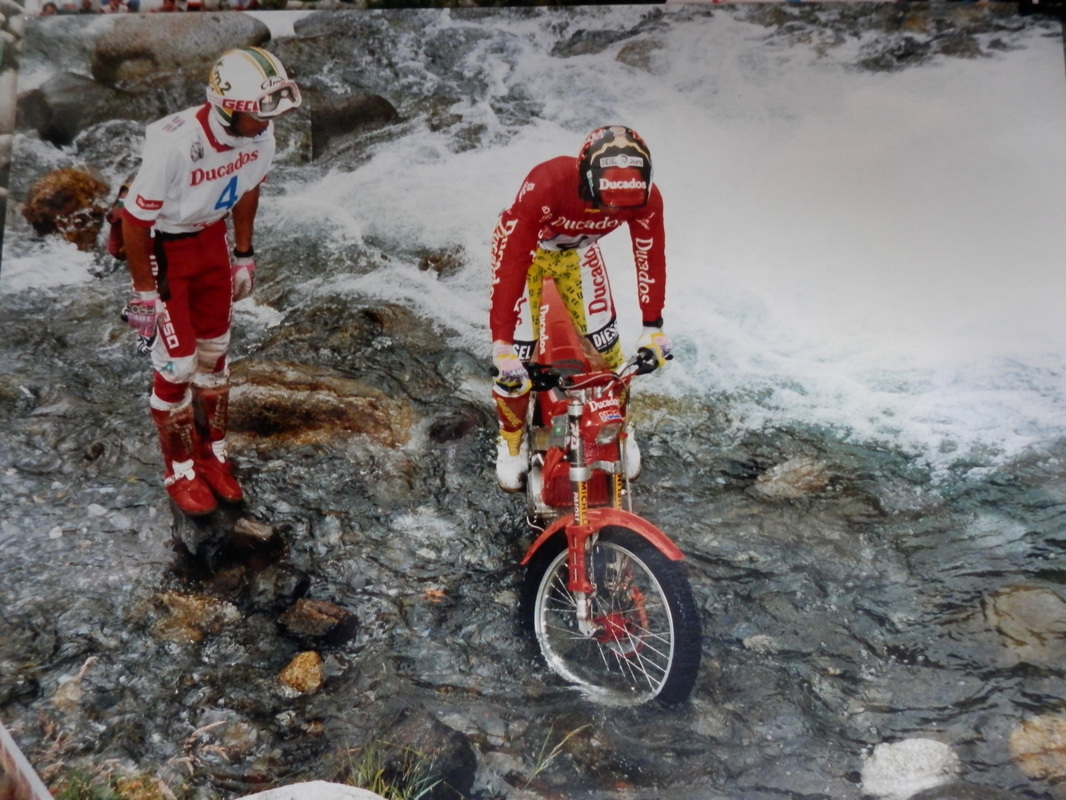 Amos Bilbao Interview WWW.RETROTRIALS.COM
That year was the most profit for me. I finished 4th. I won one World Round and rode well in the Spanish Championship. I rode many races, many indoor trials. It was good for me. At the end of 93 I broke my collar bone doing motocross with the trial bike ha ha . I crash at the end of the year and we start to test the first prototype of the bike that became the 315, you know with the shock in the vertical position. It has a narrow frame, still with the old engine. I broke the collar bone and I lost almost 2 months and then the bike was not working properly. We have many problems with the frame breaking. The break was not consistent. We cannot find the solution easy. Every frame we make different to solve the problem was an adventure. We make many changes all of the time. The steering head we keep the same as the standard bike. This part affects the rest of the frame because of the welding and how everything was built and made. In fact when Colomer start the year after they take out this part and they make all in one piece. That part we work with makes the bike very difficult to fix and the frame very difficult to fix in those days, not now, but in those days it was very difficult. So we have many problems especially with the frame as they were breaking. They were breaking at the trials everywhere. We would finish a trial and find a crack or I would find a part that is longer than normal and I would do a jump and find that something has gone wrong and the bike is not the same. We have many problems with the frame. Never with the engine or the clutch, but he frame give us lots of problem. At the end of that year they sign Colomer and they want both in the same team. They never say they don’t want me but everything that year went wrong. I was trying hard, they were trying hard as well, but the results never arrive and for me was like “hey”. It was the first time I think that I was not growing up or maybe going down and I am only 24. In 1994 I get 12th.
This photo was taken at the 1996 Trials des Nations in Kinna Sweden.
Jordi Tarres , Marcel Justribo , Amos Bilbao and Marc Colomer 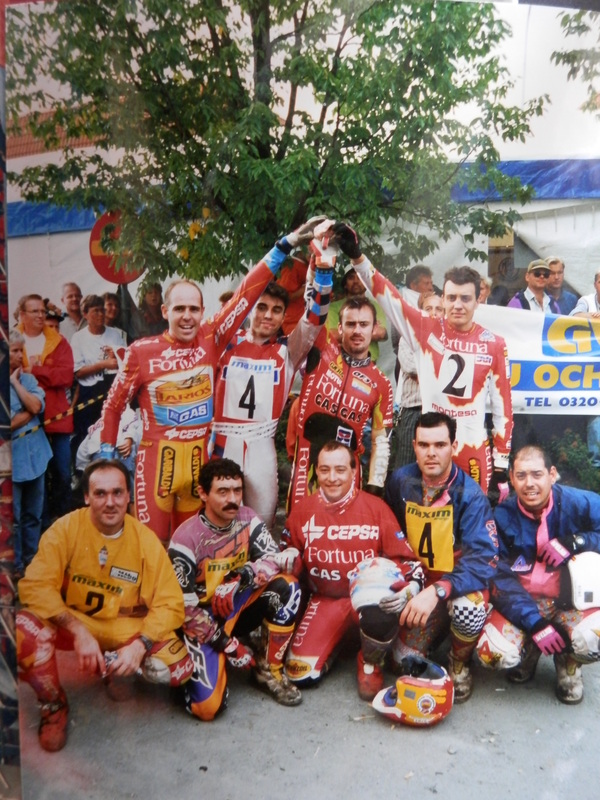