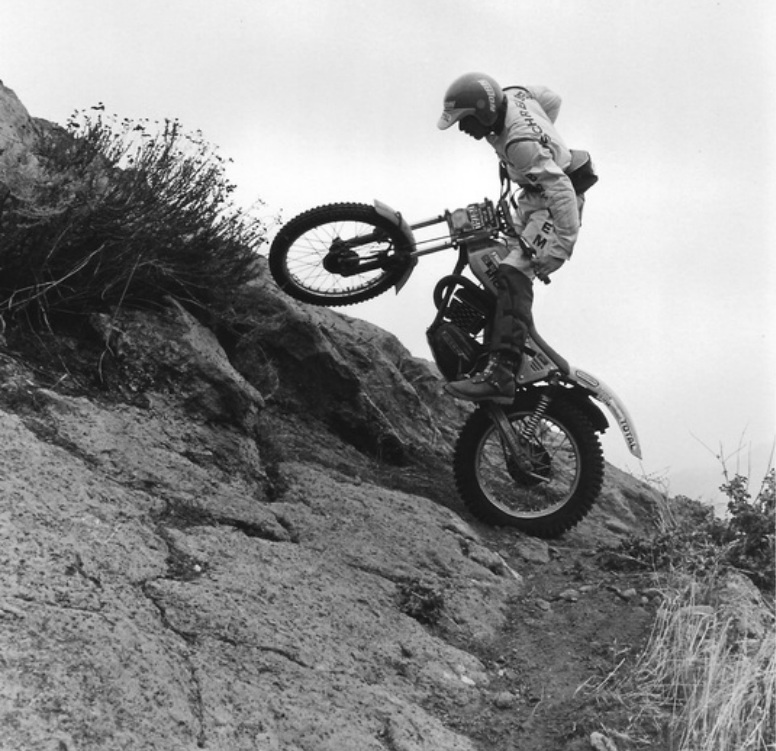 2014 Bernie Schreiber Interview photo len weed
Its June 20 1982 at the Alberta Canadian World Trial. Bernie has just been presented with his native head dress for winning the trial. Standing behind him is SWM team manager  Pietro Kuciukian .In the next photo Charles Coutard is presented with a leather native vest for 4th place . You can see Toni Gorgot behind in blue. In the next photo Charles and Bernie line up with 2nd placed Thierry Michaud.
Why did you leave SWM?

When that factory closed I left. It was never well managed, you know. I was with Galeazzi who was also on SWM. The then owner, just sold the whole team to Garelli and Agrati Aarelli now owned the team. Everyone including the  mechanics went there. I didn't really have any choice. At the time everyone else was settled into contracts and all of the factories were committed to their spend. It was difficult to change or leave at this time. I started with Garelli on a twin shock but it was impossible too ride. No one could ride this bike. It was at this point that I did a deal with Garelli and I stopped.
It got to the point where they just didn't want to see the reality. First of all ,the reality that I was not gonna be a World Champion. Number two . That the bike was far far out and not up to it. It was just a cheap way to try and do a marketing campaign around a scooter company that didn't work. ﻿
They just wanted me to continue riding just like that. I had ridden all of the bikes and I can do things on those other bikes that I just couldn't do on this Garelli. I told Kucluklan that you need to do this deal with me or basically I'm going to retire, unless they want me to continue  and finish in 27th or 30th position in the World Championship. I didn’t think that's good for anybody. Anyway , we just came to an agreement where they told me not to ride any other bikes until my contract had ended So , I just unofficially retired. They continued to pay me until the end of my contract. That was it basically and I didn't ride anymore. That all finished and I was living with the Burgat's at their family house in Albertville, France, dating Gilles sister Yannick and training with Gilles on a Yamaha.
I would practice with Gilles on the Yamaha bike and he gave me some support, so I rode again for a year once the Garelli contract had finished.


So Burgat saved you at this time?


Well, they surely supported me. I respect a lot the Burgat's. The family was very well off and the children were brought up in a nice environment. Wonderful family…all of them.