A nice early photo of Amos on the Beta TR34, Tommi Ahvala on the Fantic as well as
Gabino Renales riding behind on the Montesa 307 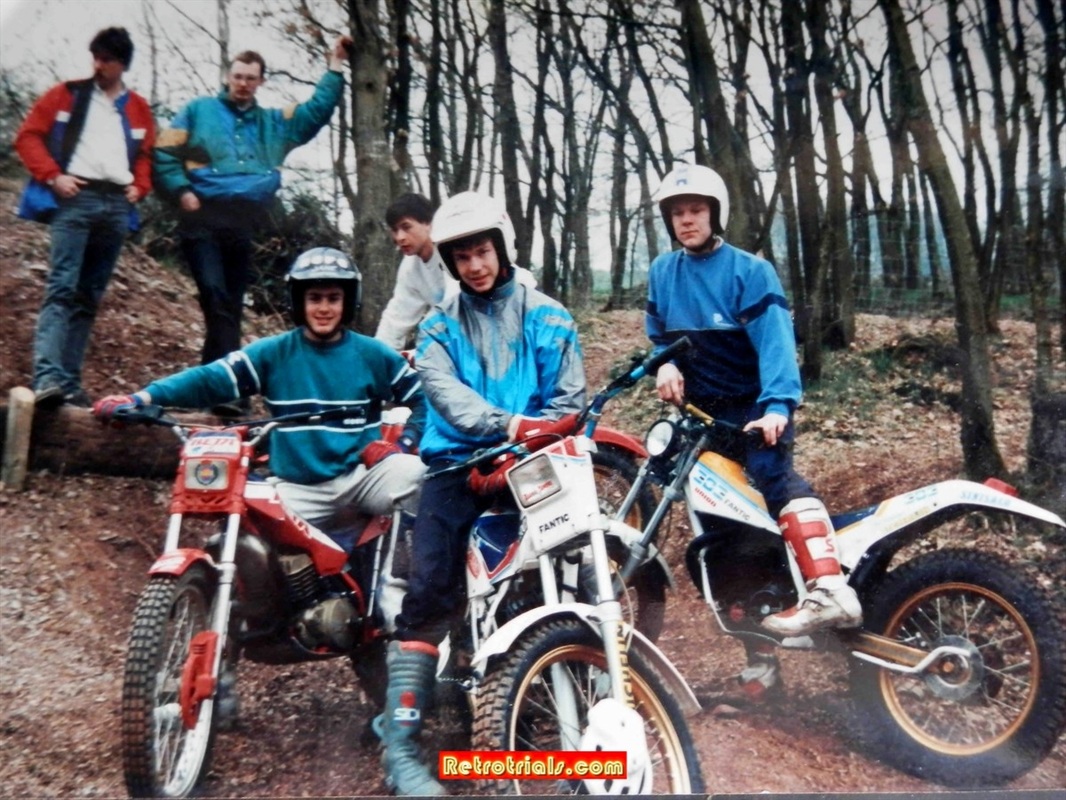 Amos Bilbao Interview WWW.RETROTRIALS.COM
Trueba prepare a special bike for me, because Trueba make a frame and many parts for that bike because the bike was very special, so he start to build the frames and footrests and many parts and in Spain, because of the European community they bring the engine and front fork, the mud guard and the petrol tank and they build the rest here. So he make a very special bike for me and much lighter. The frame and everything was much lighter especially for me and he tried to make it a bit smaller and I used this bike for 3 or 4 months because after that I start to break everything because I was pushing.
When you rode with Beta, how many bikes did you use in one year?

What were the best and the hard times of riding in the Beta years?

At the beginning it was very hard for me to go to the World rounds, as soon as you stop with the feet down they give you a five so it was this big advantage for Jordi as he can stop and no feet down, he can move the bike and no feet down. For the rest of the riders, no. I had no developed this enough yet. If you went to England I remember being in the south in Petersfield, I remember big hills. I remember this day there were big hills. I was there. I try and then out my foot down and five and then in Germany same thing.

Was your Beta powerful enough for the Petersfield trial and the big hills?

Enough power. It is not a question of power I think. I remember the weather, I remember the muddy car park, I remember section number 1 I think. It was a big hill with the white rock and I remember also a couple of sections with trees, I am not completely sure, very very slippery, many fives.
Amos - "They put the bike in the van and they bring me to Rellinars to Jordi for practice".
These are very rare photos of Amos practising with Jordi Tarres slightly later on in 89

Amos Bilbao Interview WWW.RETROTRIALS.COM
They put the bike in the van and they bring me to Rellinars to Jordi for practice. They bring me in the morning and bring me back in the afternoon after they collect me. They always collect me – ha ha. It was like this and I had been living in his house for maybe four or five months with his family and I learn a lot from him he is a very nice guy. Then I had 2 more years with Beta and then in 88 when Jordi start to build his own team with the big truck and everything it was like he want me in the team but some people who love me say I think it is better that you move to a different factory so I move to Fantic.


I have a few offers and the Fantic was good and the offer was good so I go to Fantic . Ignacio and Pere Arpa make me an offer to ride the Merlin, but I never test the bike, no because in these days it had no sense to. The bike was much bigger than the Beta and it’s like “we will give you 1,000000 if you are World Champion and if not will give you nothing”. Ok, so there was no money. They make a deal if I win the Spanish Championship I would get a lot of money, but there was no chance for me to win it not in those days, so if I’m not winning I have the same money as Beta and a prefer the Beta. I liked working with Beta, I was 18, 19.
Here is a publicity photo for the Fantic 305, which Amos loved so much. In 1989 Amos rode for the Spanish Team Subira Fantic Team. This was managed by fantic legend and 3 times Spanish Championship runner up Jaime Subira.
The little lad, pictured here with Amos is Jaime's son. 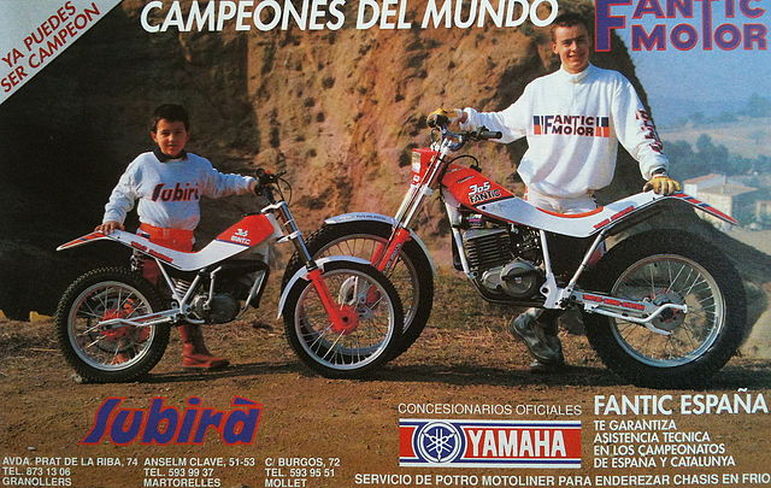 Amos Bilbao Interview WWW.RETROTRIALS.COM
Why did you make this move to Fantic?

Yes, but at the end, I don’t know. I was riding I think I finished 16th in 88 in the World Championship, I’m not sure, I think so. I move because I have a few offers in those days and I have to start. I have an offer from Fantic and offer from Merlin, I have a few offers. The Fantic offer was not bad. The problem was that they never paid but, it was no problem in 89 because I was riding with team Subira. I get the money from Subira and some help from the factory but in 90 I was supposed to be paid full factory and a little from Subira and the money from the factory never arrived, not all only a little at the very beginning, after that no.

In 89, tell me about the deal you had with Fantic?

I get the deal from the factory but we prepare the bikes and everything in Barcelona.

In Austria in 1988 you had your first really prominent and good result in 6th place. Was there any reason why you suddenly started getting better results at this time?

Where were you living at this time?

I was living in Barcelona. I have one friend who owns one trial shop, bike shop. I was living there and travelling with the Spanish federation to all the race.

Did you go practicing alone or who did you practice with?

No, when I was living in Barcelona I used to practice with Jordi, with Pons with Andreu. The people of the Federation would quite often practice together. Later, Jordi  is so much better and my level in those days compared with Jordi was not as good, when I go to his house was very low so there is no sense so I cannot attempt was he is doing , so I practice with Federation.

Who was your first sponsor?

My father ha ha. I remember Jane, but Jane never paid to me, they paid to the Trueba. They were a sponsor of the team. I get a little money from Nava and Gaerne and some other small sponsors. I don’t think my father was supporting me was I was 18, for sure no. At the end it was still costing him some money as the car I have in Barcelona was my fathers, he buy the van for me.
the sections they don’t make this, maybe Andreu a little. Even in Scotland this happen. Somebody would stop me. I was ready to go into the section and somebody would come to take a picture and many times I say hey ok and they I go and get a 5 but sure sometimes I say no after. No, when I am with Toni and someone want to take a picture I go out and take the picture because I know. I think this make a difference and also my riding style was a little like Bosis and Fujinami, a little different compared to the others. Not looking, you just hear the bike and think “This is Amos “ ha ha. Many people say this.

Was your riding style quite hard on the bikes and did you damage more bikes that other riders?

No, no, I don’t have that feeling, maybe engines because I make motocross sometimes with the trial bike. I like to go fast in between the sections and jump so maybe in that way. I seize only one engine not because I go to fast but because something go wrong with that engine. I remember with the Fantic 305, that bike was incredible, strong and fast, fast and furious ha ha you know. I remember going to practice one day with my friend and we used to go 5, 6 km on the road flat out. I crash and I bend the front fork, the rear swinging arm and destroyed the bike. I was just going to practice ha ha.  I remember also that at one race in Barcelona when I was on the hills I go like motocross and when I was on the road I went like top racing with the knee on the road. In one corner I was flat out and the rear wheel slip and the no grip and I high side and the flip me off in the air. Then 500 meter’s after we have a downhill and then a turn and I was very fast and at the turn I hit one tree and I have another big crash. This happened in maybe 1, 2 kilometers, 2 time high side ha ha. This was on the Fantic. It was very fast, like the speed of the bike.
Who was in the Fantic team with you?

First year I think there was Michaud, Saunders and Miglio. 2nd year, Michaud , Miglio and me. That was when Michaud break his knee in France in Toulouse so that year only me and Miglio in the team. We travelled together to the races.
Did you go to the factory often in Italy?

Yes often, at that time they prepare the bike in Italy so I travelled to there to Italy quite often, before the races. If there was a race in Belgium I went the week before to the factory to fix the bike.
Your results improve with the Fantic a lot. What was the reason for this?

Well, because I was practicing and I was growing up and also because the bike was very good for me. I was starting to do a little work with the engine. Much more practice. I was growing as a rider and getting better and stronger.
Forget Sinatra and Sammy Davis Junior , this is the Spanish Trial "Brat pack" .
The 80's dream team.
Gabino Renales , Amos Bilbao , Jordi Tarres and Andreu Codina  on the morning of the 1990 TDN in France 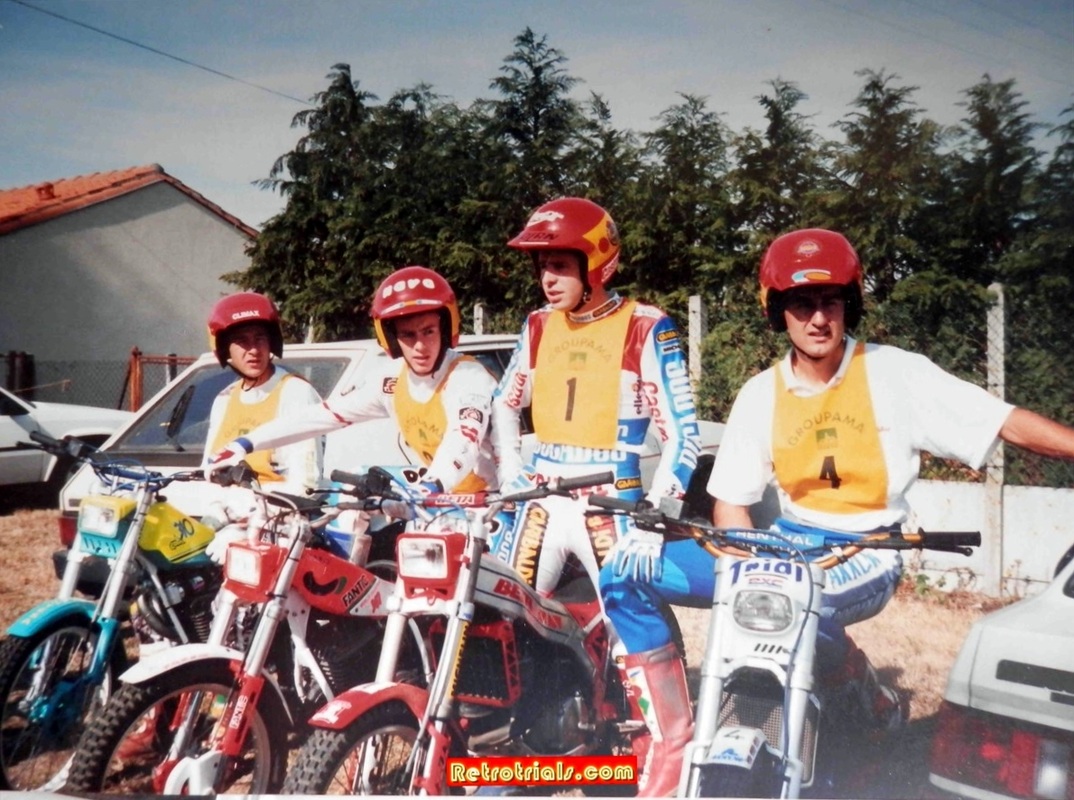