I remember Ettore Baldini told me that just before the Canadian world trial he just happened to walk past the Ivano Beggio , the boss and owner of Aprilia. Beggio didn’t talk to Ettore much. All he said was “no matter what it takes, you have to win”. Cost didn’t matter. He never mentioned this to me until after the season end. He felt so much pressure there because he felt that his job was on the line. They would have invested an amount of money, whatever it takes for a team or bike, there was a cheque there as long as they would win. Ha ha ha. If they didn’t win, it would be a bad deal. It was critical.

Did you ever break the bike?

I don’t think so, it held together pretty well. I had no problems with the engines at all or anything with the bike. They were strong.

You worked with Martin Clerch. What can you tell me about that?
Jourko Ahvala, Spanish prototype engineer Martin Clerch and Tommi Ahvala fit Clerch's first ever prototype hydraulic clutch to the Aprilia. Tommi's was raised on mending his own bikes, which made his mechanical skills excellent. 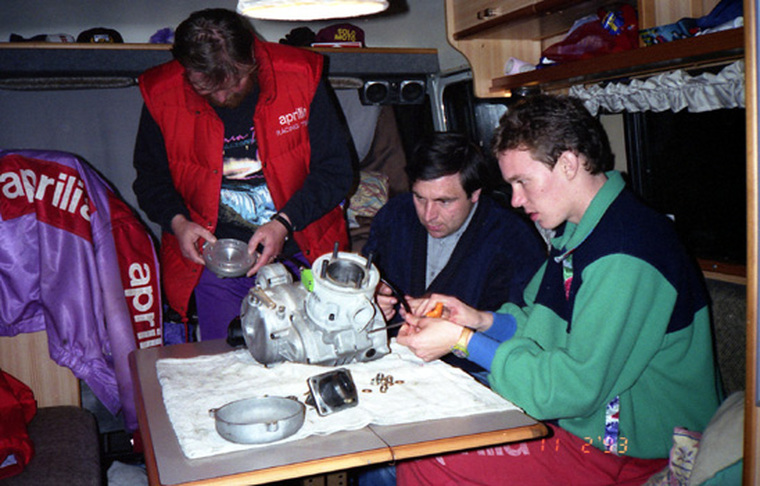 2013 Tommi Ahvala Interview WWW.RETROTRIALS.COM
He came to visit me in my motorhome and showed me a prototype Aprilia engine. I think I saw him at a couple of events but I only met him the once. He wanted me to test a prototype engine but of course we were so involved with the Aprilia engine that we said, you’ll have to talk to the factory and you’ll have to go from there. We couldn’t take this risk of fitting an unknown engine to the bike. I don’t know what happened with it. It was an interesting concept and my father being very capable on the mechanical side, it didn’t really care as long as it would make my bike better ha ha ha. It was a fuel injection system he was proposing or it might have had a hydraulic clutch I can’t remember. He had the concept.
Stop ! Were back in 2013. Tommi and I have been talking a lot and been to the sections of the trial. We have now walked back to the start area and are chatting to a friends of his. Everywhere we go Tommi is stopped by riders and spectators. Some know Tommi, some just know his face and know what he achieved back in 1992.
Ok ---- have a look at this bike. See anything strange ? 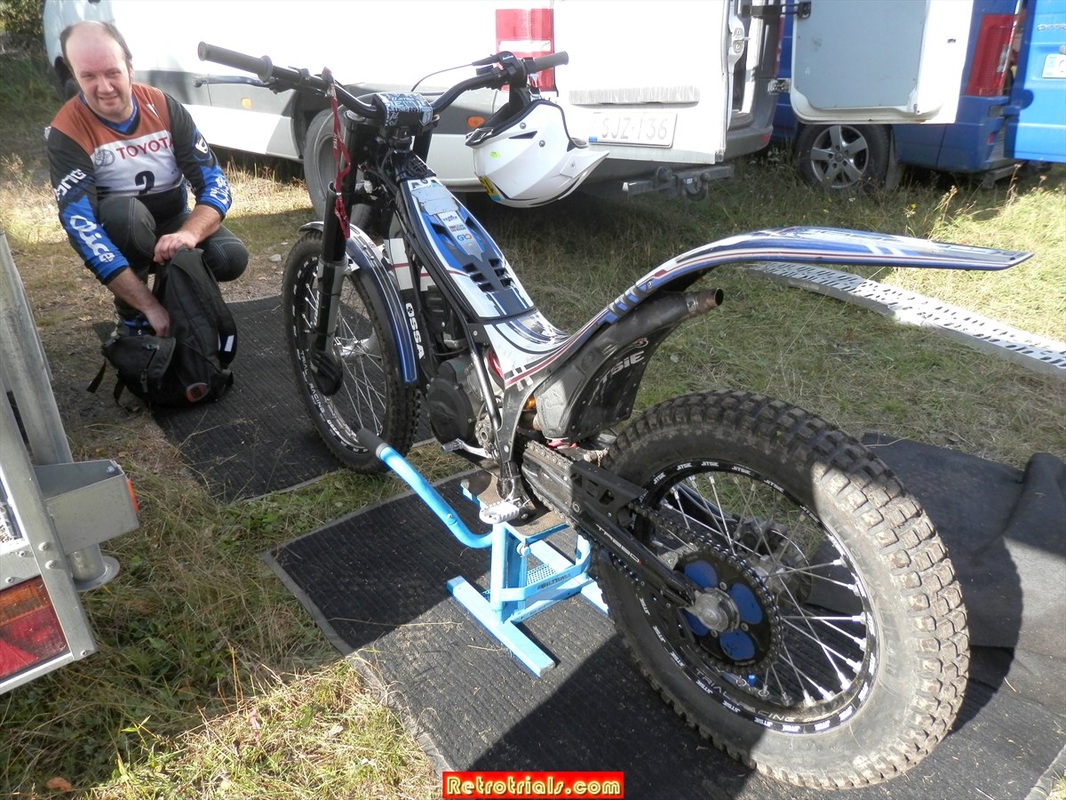 2013 Tommi Ahvala Interview WWW.RETROTRIALS.COM
Ok, so its not easy to see. But heres a close up. The sprocket has been designed with less teeth. This stops more dirt coming into contact with the chain and this causes less wear on the chain. The rider says it is perfect and he has not had any problems at all. No slip, no click , no de - railing , no chain stretch - perfect. You saw it first here :)
Ok, it's time to go. There is so much more to see and so much more to talk about.


So much to do. We've got to get on, so back in the van we jump and we head back towards Tommi's house.

So Tommi , what was the plan for the 93 season?

For the 93 season…we already had the prototype Aprilia that was completely different from old model Aprilia. It had the same engine as the Scorpa later used and rear  suspension was positioned upright as all the other bike as well and just like the most modern bikes have now. For 70 – 80 % of the sections this prototype worked better than the bike I had for the 92 season and we were debating whether I should start riding with that bike and I kind of wanted to start riding as it performed so much better in certain aspects. I was sure we could make it better overall.
A brilliant photo of poster boy and World Champion Tommi with the 93 Aprilia 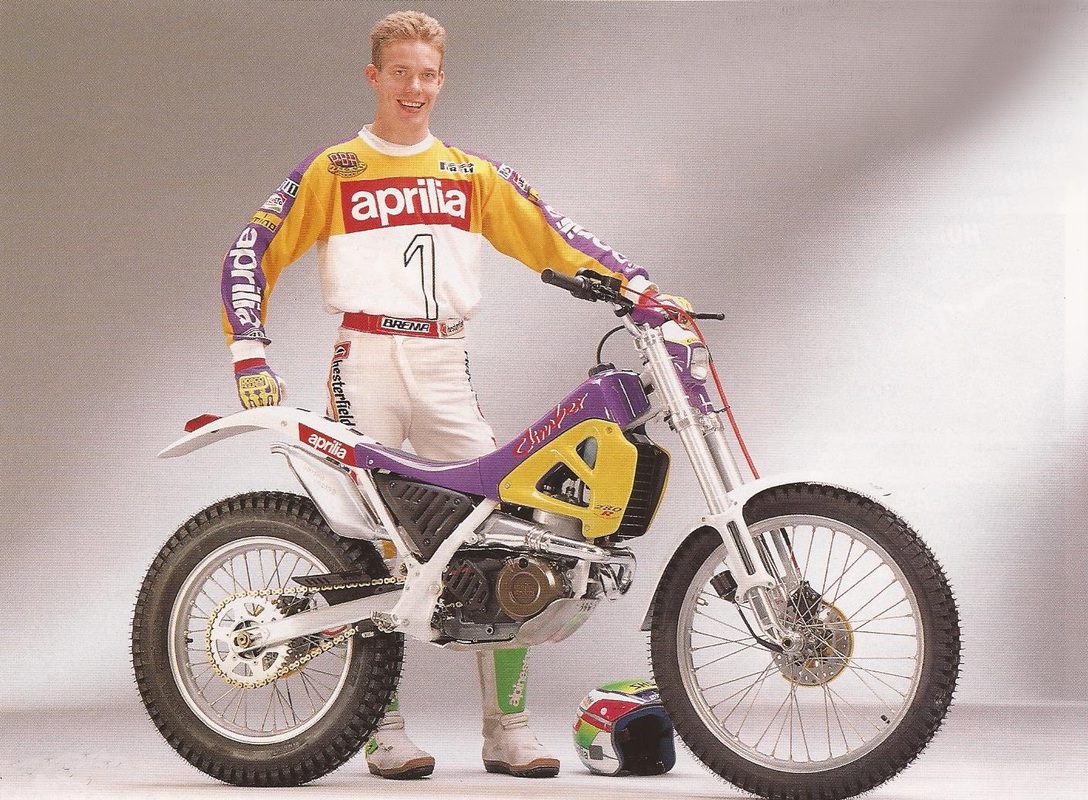 2013 Tommi Ahvala Feature Interview WWW.RETROTRIALS.COM
I remember speaking to the team principle and he said: I promise you that if you win the Championship we will present this new bike with your name and then you can ride it in 93. So then we rode in 92 with the same 91 bike with small changes and it was kind of getting a little out of date for trial at the time. Then I won the Championship and they said to me  that we desided to continue with the same old model bike so I was really disappointed. I felt as though I had kept my part of the deal and I had been promised this new bike and they didn’t do it. In 93 the bike was getting a little old fashioned  from the riding that we had to do so that was a really hard beginning for my 93 season as they hadn’t done what they had promised and I thought why should I try my best. It was the turning point between me and Aprilia as they had let me down. Now I was the underdog and I knew we had this better bike that we could have ridden and been competitive.
Tommi's 93 machines featured amongst other things a hydraulic clutch as well as a super polished air box.
Can you remember anything else about this prototype?

It had the same engine as the Scorpa, conventional forks and a modern chassis. It was an aluminium framed bike. There were no pictures of this bike. Being Aprilia none were allowed.

Well, I’ll have to make it my mission to find one ha ha ha.

It had carbon fibre handle bars and carbon front suspension that we tested. Of course most of these things never made it into reality. I remember the carbon fibre handle bars that we tested were very good but I didn’t feel comfortable feeling with them. It was something that I needed to hang on to and I didn’t have confidence in them. I’m sure they would have been fine.

You told me earlier when the tape was off about the mind games that went on, on the trials circuit between one rider and another. Please can you repeat this?
The 1993 season saw Tommi riding with the number one bib on a slightly modified bike. Aprilia had plans which affected the bike - read on for more