2014 Bernie Schreiber Interview
Did you visit the Italjet factory and what town was it in?

Yes , went there .It was in Bologna. I knew it was the bike and it wasn't me. I could make a 120% effort on a section and clean a section. Then I’d jump on an SWM or jump on a Bultaco, I could just clean it, just like that , so much easier.

Did you have support with a mechanic?

Yes, but not an engineer you know. The support of the mechanic is fine but he doesn't know how to make a complete frame. They didn’t have all those years of experience that they had at Bultaco. They were impressive. You can't copy that, it's very difficult.

What was the name of the man that ran Italjet?

Reapoldo Tolderini. They call him Leo. A good sales person- ha ha . You learn things in life and much as I like Italy there is a big difference between Italians and Spanish especially in the loyalty.
This group of photos were taken by GasGas dealer and trials enthusiast Matt Liberatore in 1981 at the US World Trial at Watkins Glen, New York state. It was June the 14th. 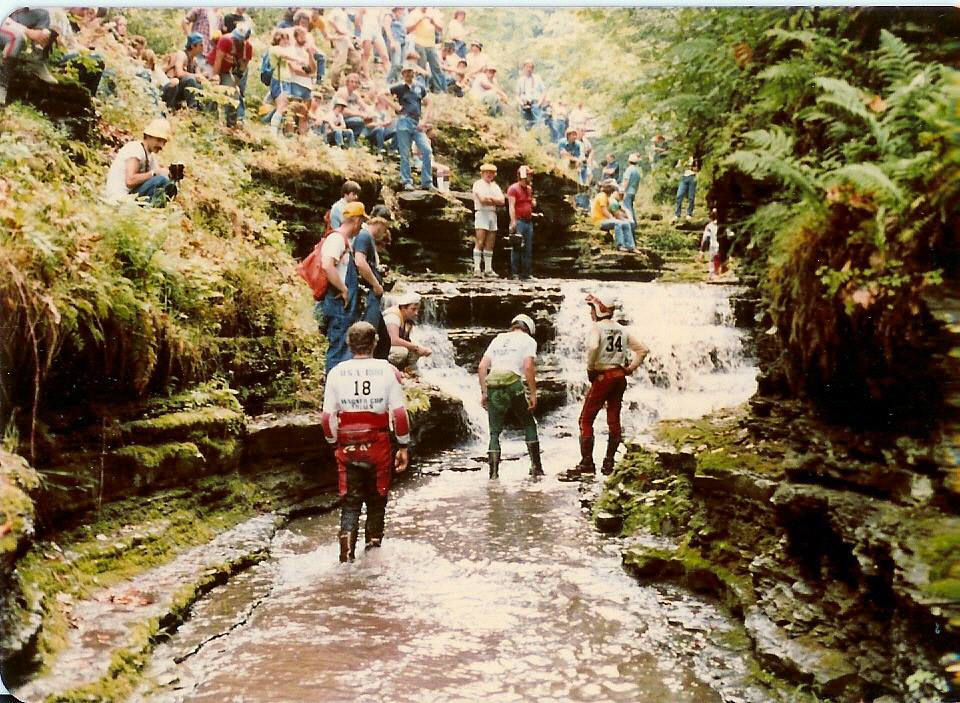 2014 Bernie Schreiber Interview photo matt liberatore
The riders had to do a trick turn on the middle ledge for the bank climb on the left to exit. Bernie was the only one who could do a floating turn bouncing the front wheel off the rock face (picture below to the right). Burgat used two wheel hops using two fingers on clutch. That had never seen it before and the spectators were all stunned. Bernie used the same floating bank turn there on the SWM Jumbo in 84! No one else could do that then either.
Bernie finishing off the section.
How did the deal with SWM come about?

In 1979,Pietro Kuciukian had already come to me with an offer from SWM and I refused at that time because although they had Coultard, they hadn't had any great results in 1979. I kept thinking it’s better if I have the Bultaco people. That's what I was thinking in my mind. I thought that I was going to have a replica Bultaco with Italjet  , so that will be the best bike to have. After my experiences with Italjet I sent him a letter and and he came back to me. I knew  Gilles Burgat was leaving to Fantic for the money as he had a huge offer. I then slotted straight into SWM and into Gilles old position. I lived in Italy for five years and went to the factory many many times. I lived in Milan and the factory was just 25 minutes away. The Italjet factory was two hours south.