Did the sports psychiatrist help you with any specific issues?

We didn’t really have any problems but we wanted to see if he had any pointers. Every little bit helps. I don’t really remember exactly what he did. It was mainly on how to concentrate better and concentrate when they are a distraction. A lot of people tried to play mind games and they taught you how to get rid of the bad feelings out of you. I think that I knew all of that stuff already, I don’t think there was anything knew. The physical part helped though. I had a problem on double steps where you had to use your legs really fast and I was real slow on that kind of situation so I was given specific training for me which would make my muscle reaction quicker. It really helped me. The physical part was very important. We didn’t go and see the mental guy if because we had any problems we just went to see if there was an advantage we could learn about.

Jordi had been World Champion for many years and suddenly you had come in and taken his crown from him?
Jordi Tarres and Tommi Ahvala were both out to win. They respected each other as competitors but the intense competition meant they never really got to know each other. 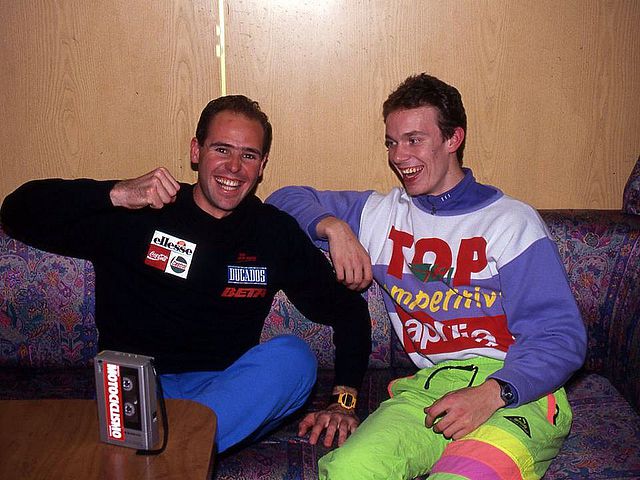 2013 Tommi Ahvala Interview WWW.RETROTRIALS.COM
So you didn’t have your truck over there?

No, we were in the truck. We had a lot of safety measures for the last trial in US and Canada. We purposely stayed at a hotel out of town where no other riders would be so nobody would try and bother us and stop our sleep. We saw this as a possibility and investing a couple of extra hundred dollars was nothing compared to what you could lose there. You could stay at the same hotel as everybody but then you don’t get a good night’s rest and you don’t win. We wanted to eliminate that possibility. The same thing at the US World Round. We hired 3 or 4 rooms but we didn’t tell anybody which room we were in so nobody could bother us. We minimised the risk. Someone could have been calling us all night or just having a party outside. We knew that this opportunity doesn’t come every day and is once in a lifetime for we took these preparations. It would be silly to lose this opportunity if this could be avoided real easy.

It was very special. They look about the same as production but there is nothing in common. The frame was half as think so was a lot lighter. The whole transmission, exhaust, suspension, was all made from titanium. The frame geometry was surprisingly from the older bike that 92. I don’t remember 89 or 90 model. I always used the same frame geometry so I actually ride the older bike than what it looked like but everything was just tricked out, it was really light with a lot of power and different ignition.
The 92 Aprilia Climber was absolutely gorgeous, but was later generally regarded as being a heavy and larger than the competition. This fact makes Tommi's win even more the impressive.
I have 10 different ignition maps on it but actually we never used them other than one. We decided that the beginning on the seasons to stay with the same one all of the time. We used to work on the testing up until the end of February and then we left the bike and I never made any changes during the season. If there was something real bad then we would try to modify it a little bit but other than that, it stayed the same. The suspension was custom and set up for me also. We had carbon fibre front suspension and we had two sets that was completely out of carbon fibre and it was really extensive.
With carbon fibre and magnesium front forks , no expense was spared.
The factory says we only have two, that’s what the budgets stretch to. It was entirely carbon fibre. The sliders were carbon, everything. Actually I started with them and I was being really careful with them and I used them for one or two races, I don’t know if I used them for the World Rounds at all but I took them off. I thought I’d rather have that extra weight but I don’t have to worry about the bike. They wouldn’t have charged me if I had messed them up but money being limited they could only stretch to two sets and it would take a lot of time to build a new set. The standard forks were good enough for me. It was starting to affect my riding that I was a little cautious and not trying 100%, maybe 97%. From what I remember the engine was very similar to stock but the timing disc was different. To be honest I don’t remember. It was all made of lighter material. Aprilia were real serious about having the bike looking great. We would fit new plastics to the bike for each event. My competition bike for the races would be brought by the team and it would be like new always.
Ettore Baldini and Fausto Colombo prepare Tommi's machine after practising
Anything scratched would go on the practise bike.  I remember we had this system that Beta started where we didn’t any longer had a number 1 or a number 2 bike. It was all just a bunch of components so you would have one motorcycle and you would just change everything on it. You would never know how many bikes that you would have in the season because it would basically be the same bike but I would have changed the engine 3 times and the suspension 2 times or whatever. It was a different mentality.