So you had won the World Championship. You must have been elated?

It’s one of those things, like I was telling you yesterday, you have worked so hard and it was like well that’s how it was supposed to happen and now I was just thinking about next year and the indoors and everything else so it’s like we have accomplished that …what’s next. It was a really big deal for my parents and for my father, it was a really big deal for him, way bigger than for me and for the team as well.
Tommi celebrates his hard fought win , with his family and Pasi Jaatinen who came in as an extra minder in the last World rounds.
I was happy but unfortunately I didn’t know how to celebrate or take full joy out of the situation. Looking back it was kind of a pity as it’s something you only achieve, or very few people can achieve so if you don’t know how to celebrate and have fun with it, it just goes away. It was just one of those things. When you are in the middle of it it’s just what you expect and you’re getting on with life. I just remember what a chaotic situation it was.
Number 2 .....not anymore
I cant seem to stop smiling
When I got back home the phone kept ringing all of the time. I didn’t touch my bike for 2 or 3 weeks as I was running around and doing interviews and everything else. So it changed my whole world. After 2 weeks I shut my phone off and went to our summer cottage for a couple of days. It was way too much, I couldn’t handle that and I needed to get away from it. I needed to cool down. It brought a lot of attention in Finland and everywhere else of course as well. That’s when I realised how big of a deal it is to be a World Champion. It affects actually your life. If you are no 2 you are nobody but if you win you get a lot of world recognition for that.
A Tommi interview - All bow and be humble. You are in the presence of the Alfer van in the background :) 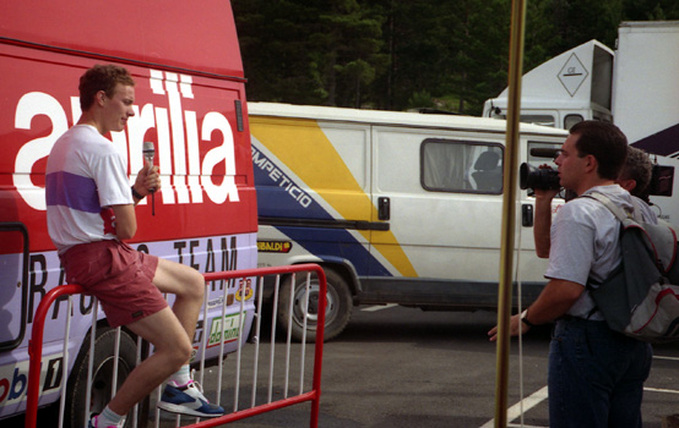 2013 Tommi Ahvala Interview WWW.RETROTRIALS.COM
Did you get a lot of recognition in Finland?
The Finnish motorcycle federation had already put a lot of effort into me, publicity on me and they now wanted to take advantage of that which was fine for us, they should get recognition for what they have done. It was pretty hectic from that point on.

Finland is a small country with a fairly small population. Did you find that you would be recognised walking down the street?

Oh yes, everybody knows me here. I didn’t really pay attention as I was in the section and just did my own stuff, but the people round me would be staring at me and pointing fingers, luckily it wasn’t the middle finger all of the time ha ha ha ha ha

Even today a lot of people still know me. They know my name on the phone or if they recognise me. It’s kind of funny for a lot of riders and spectators back then are now running auto parts stores or stores of all sorts, motorcycle related or otherwise or Rv’s so I actually get treated very good because now they get to deal with me. It might have been 20 years ago but now they are talking to me and they are in a position where they can give me good discounts and stuff ha ha ha ha.
100,000 State International stamps were issued honoring the motoring legends of Finland 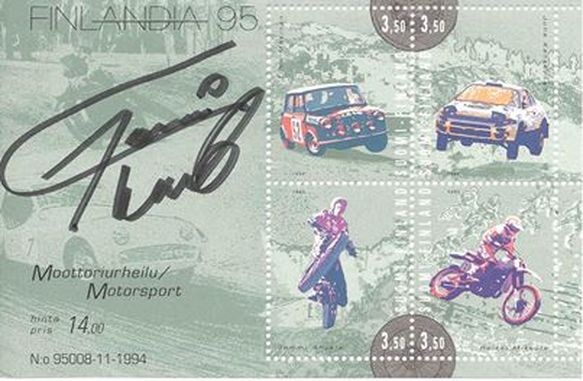 Not really. In my contract I had a bonus for being World Champion, but it wasn’t that significant. If I had won a second time …..My contract ended at the end of 92 so I managed to sign a pretty good 1 year contract and winning the Championship in 93 would have given me a really good bonus but I didn’t win. Yes, it was beneficial but I don’t think it was that big of a deal between if I was 2nd or first.
This is a difficult question…….

You won two World Championships and you spent a lot of time on the podium but you didn’t win a lot of events. What are your thoughts behind that?

May be it comes down to my personality that I’m not a crazy risk taker. I give it all but only up until a certain point. Maybe to win more races is more or nothing so I always thought ok I’ll take the risk  but at the end I always want to make sure I get away with 1 or 2. So that’s why I was really consistent but sometimes I didn’t use that last per cent that would have got me more victories but probably would have got me less podium finishes as well.

So that was your tactic?

Yes, because we knew consistency would be the key. If you’re always on the podium you’ll be really hard to beat.