When I was a kid I remember we came here for the race and saw them practise here also. I was so young maybe 4 or 5. I remember it was the first year of the World Championships when Malcolm Rathmell became the First World Champion. Before that it had been the European championships.

Which club were you a member of?

I was a member of this motorcycle club but we never paid for it. My father was working really hard at the motorcycle club running a youth program and everything like that. They wanted us to pay the yearly membership fee but he refused to pay this, rightly so, as he thought that he had worked enough for the club that he shouldn’t have to pay for it. So that kind of stuck with me ha ha. I’ve never paid a membership fee for my motorcycle club and they kept send me bills every year and I never paid them and finally they made me honorary member ha ha ha and so I never have to pay no. I’m an honorary member for life. They got tired of sending me bills ha ha ha.

What else can you remember about the 92 season of trials?
The last 2 rounds were really decisive rounds for us. We had a pretty long break between the 3 to last event and the last 2 in Canada and the US and we didn’t have an indoor so I didn’t see Jordi and he didn’t see me for a month and half and it was kind of a mystery what him and me had developed on our bikes and riding. There was only two points between us so basically the Championship was restarting for these last 2 events. So anyway, we go to the Canada World Round I was behind maybe 2 or 3 points and we get there on Tuesday or Wednesday. We got there a little bit later than everybody else. I got my bike out and when we were putting our stuff together I had seen Jordi and Diego and the first rider practising a section. I could see Jordi wasn’t making the section at all. It was a really hard rocky section.
These are the photos of the actual practise section in Canada
I got my bike together and made sure everything worked. So I went to the bottom of the hill where they had this section and everybody had stopped, the fight was on. I just thought I’ll take my chances here and Diego was at the top with Jordi with all his mechanics and anyway I shouted to Diego and said “how is this section?” and Diego replied “It’s alright, it’s not too bad, you should be able to make it “. Everybody was looking at the section.
An iconic Ahvala image 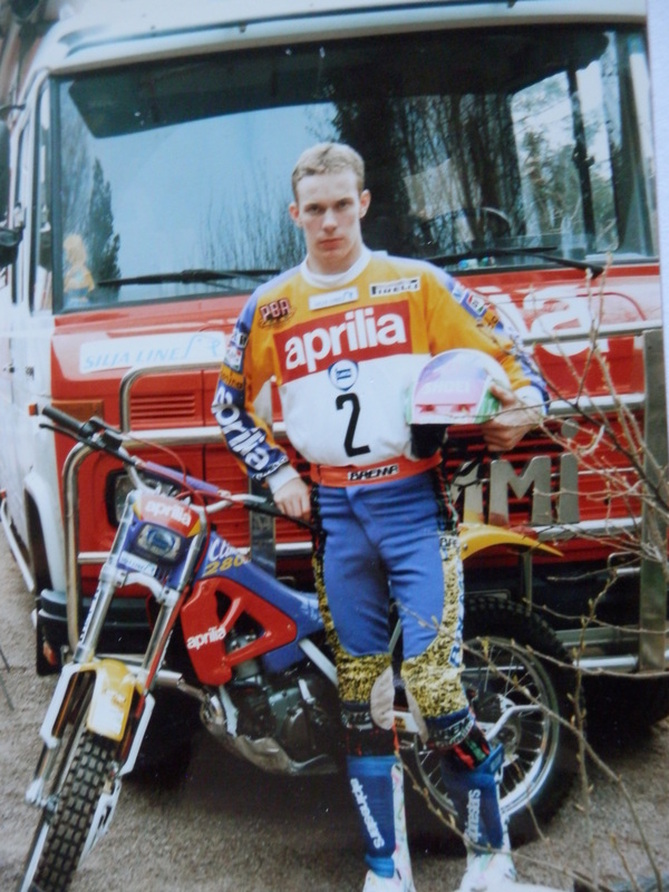 2013 Tommi Ahvala Interview WWW.RETROTRIALS.COM
I then got my stuff together and started to ride better and better. Surprisingly most riders cheered for me, Diego and everybody else. I guess they wanted to see a new World Champion. They didn’t have anything against Jordi but they were happy if I could win. I could feel the positive energy from the other riders and I started riding to my normal standards and I knew when I ride at my normal standard I could win. Amos won, we were tied but he beat me by one point, so I was 2nd.