But you were just a rider, you should have been out there riding and worrying about cleaning your boots. What made you turn from the rider to the business man?

I think you have to go back to the beginning. Because I have difficult moments and I have to organise myself. One of my best things is that I have been able to speak a lot of languages so I can speak to a lot of people and being an open minded people and being straight makes people believe in you when you offer a project or program and people invest cos in you because they believe what you say is correct, but you cannot fail after that, you know. With Gasgas what we create is that we found very few of them were established business, all the rest were new dealerships around the world. We were hungry for business and make money and develop the brand.
Did you choose your dealers very carefully?

Arrggghhhhh carefully is a word that is not the right one. I would choose them because of enthusiasm yes yes. Normally you would have to meet them and understand them but sometimes a distributor is not only a what it is in the beginning, it is what you create with them. So let’s say I was not looking for distributers who were already established and who have a way to do the business make many quick sales. I prefer someone who “Ok take my hand, let’s make a field together, to create something “. So we would talk on the phone and I would ask them why they want to do this. What do you think they can do. This is the reason why Gasgas has such a strong dealership now.

So, thinking about the factory, your office must have been right up on the first floor next door to Josep and Narcis?

No, my office was at home. I worked from home. I would go to the factory 2 times a week from my home in Barcelona.

Were you still running Top Fun at this time?

Yes.
So you were the Gasgas worldwide sales manager and running Top Fun which is a European distributor of motorcycle and cycle parts.  You had your hands full then?

Yes, busy, always been busy I never have a problem to find work in my life.

So your office wasn’t at the factory?

No, most of the time I was away. There was no point to be in the office. I was like what they call today, a teleworker.

What was the break through for GasGas? What took them from being the small little company?

I think Gasgas make a big change ….er . We build the Halley and then we build the first water cooled, then all of these years were the experience year, finding the right suppliers finding the right pricing organising the factory but they in 1992 or 1993 with the first red bike and we get Amos.
Here are some photos of when i visited the old closed down Merlin factory in 2011. At this point is had been closed for many years.
There is a video tour at the end of this interview so , if you want you can have a better look around. 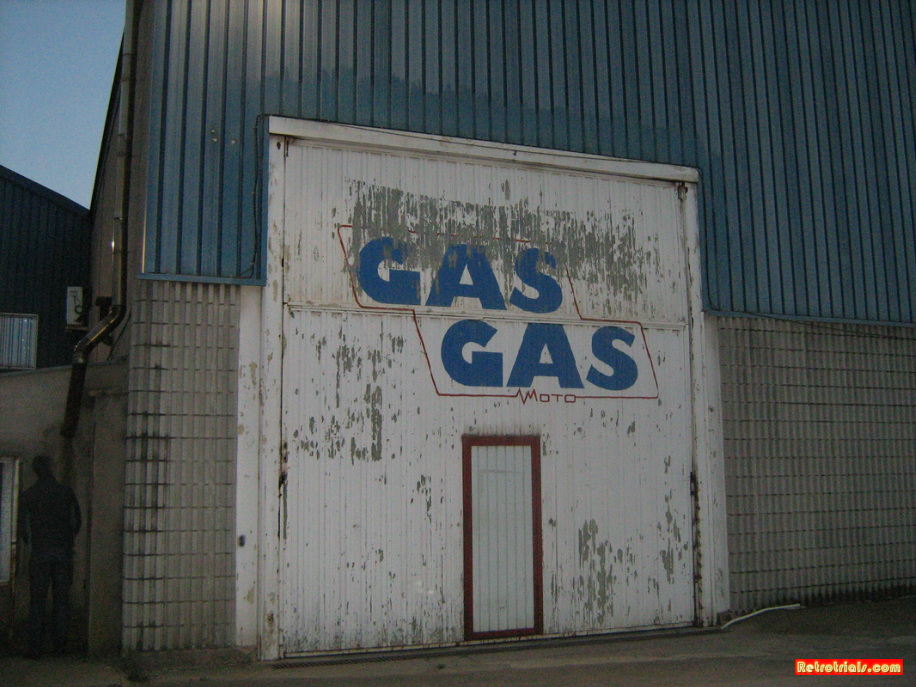 2013 Andreu Codina Interview WWW.RETROTRIALS.COM
Who was the most dedicated rider in trials that you know?

There were many that were really dedicated riders that never get through. As I say before it takes many attributes to make the best rider ……Long pause………..probably Jordi was the first true professional.

Who was the most dedicated rider who didn’t have success? Someone who ticked the box in almost every way?

Now the industry has less money…….?

This is not true. The problem is that trials has become too expensive because of the way the rules are going because it’s not right that one top rider has to have 5 minders that the cost of the minder is the same as the rider. I always think that there are not things that are going well for trials. It’s like …yes we have 10 good riders but only 4 or 5 that are real good and this 4 or 5 are really good because they have all the budget and 5 minders.

Where do you see trials going?

Trials has already gone in its own way. It is what it is. Trials in the top level and classic trials. There is no point if I tell you that in Spain if you go to a classic or twin shock trial is double of entries of a normal trial. I have probably told you everything. It’s something that is not well.

Would you change the rules of the sport at a top level?

I will put a budget limitation like there is in formula one. Do what you want but the most you have to spend is this, so you can give more the others.

First of all I think that the sport these days is too difficult and now there are too few riders. They try this year with the no stop, which I think is good, but I found out one thing with the organisers, many of them have never seen real trials and they don’t know how to design sections for no stop so I think we will see the real result of no stop after 3 or 4 years. Right now it is too early. I think the sport is lovely but more investment needs to be made in the lower classes, the 125’s to help these riders more.

You’ve mentioned all of the good things that happened at Gasgas like the terrific growth. Were there any big mistakes at Gasgas or any colossal wastes of money that took place or anything where you looked back and said “That shouldn’t have happened”?

The first water cooled bike was breaking the frames but at this time the consumer was not as particular as they are these days. There were not that many lost, we solved the situation. Today it’s impossible that you can bring a bike like the 1990 water cooled Gasgas into the market. 60% of the bike was handmade. I mean plastic re-touched, the same plastic cannot fit on another bike ha ha.

Tell me about the GasGas annual parties – where? why?

This was time when the company would hold a party for loyal workers and distributors. They were held at Narcis’ country estate and were in November usually. Some of the time there were 4000 people there from all over the world.

Did you help bringing new riders to Gasgas?

Yes, with David Cobos I helped him coming to the company. With David it was great to see a nice young guy improving like this. He’s a very nice guy. I’m very proud of him.

After Gasgas you then went and were involved with the Bultaco Sherco project?
Andreu having a serious discussion with a man at the launch of the new Bultaco Sherco. 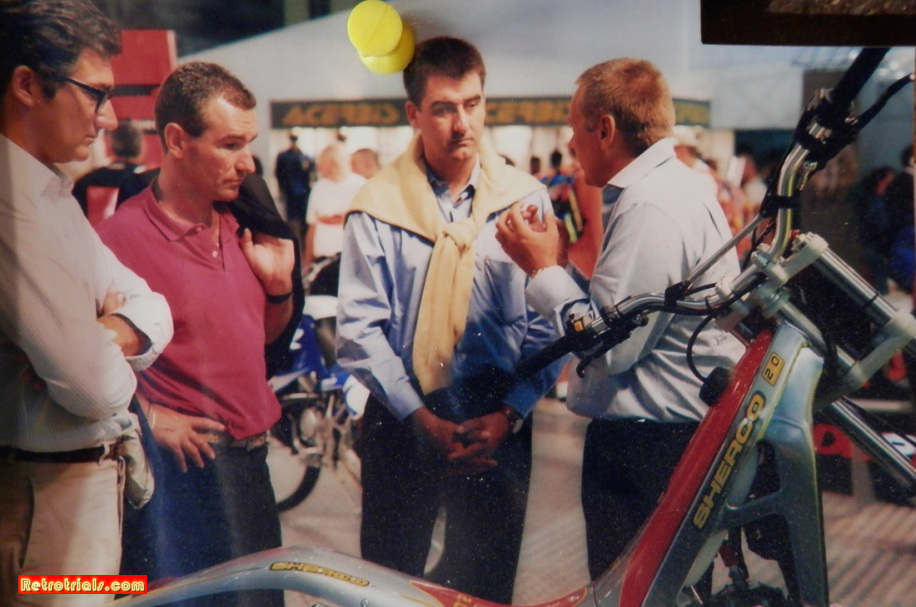 2013 Andreu Codina Interview WWW.RETROTRIALS.COM
I was a shareholder. I had 30% of the company and this was my life target to become an owner of a motorcycle company. It was myself and Marc Tessier and Marcs 70%. We start this together and it was a nice adventure but in 2008 when I was seeing the crisis coming through that I had Top Fun that was also going very well, that I owned 100% and I had Sherco that was only 30%. I had to think, was I going to be able in these next few hard years to be able to sustain these 2 companies and I had to decide to sell one or the other. Sherco would involve investment and time and Top Fun would require investment and time. I decided to sell my shares in Sherco to Marc. Nothing really happened in the company, just life decision. I still have a good relationship with Sherco.

What do you do in your spare time now?

Most of the time I ride a bicycle because it’s healthy and better for my body. I can ride trials but I had a back problem so I have to keep my muscles very fit to let me ride trials. I can ride here no problem, but if I ride Scottish Six Days then I have to practise 6 months before.

Is your plan to ride the Scottish next year to celebrate your 50 birthday?

I have to talk with my family to see if they will come. If they no come I am not doing it.

Over your years riding did you ever collect any injuries?

No, I have never broken any bone.

Which riders are you still in touch with?

Lluis, Gabino, Joan Friexas. Most of the riders I ride with I see them once twice a year. Lately in the past year I didn’t go to a trial. I am concentrating very much on the company Top Fun. The kids were younger and maybe if they want to see some trials in the future we go. Maybe I see one or two trials a year.

Who was your Favourite rider when you were growing up?

Ulf Karllson. I was also copying the way he was holding the grip. You know Ulf, he takes the grip and only holds only half of the grip at the end. Ulf was one of the best at finding the grip. Malcolm Rathmell also, he was very good to me. The riders who had the best grip were my favourites.
Andreu and the federations personal trainer. They seen happy chatting on the left , but then the man just grabs Andreu in the right photo. I dont know what that's all about :)