Did you every ride the JJ Cobas?
Yes, was junk ha ha. It was not a good bike. It was technically advanced but was not good geometry.

Why do you think that Tony Gorgot rode the bike?

Because there were crisis times in Spain and there was not money any where and Antonio was his old sponsor and they try to make a trials bike. Gabino also ride this bike.
A photo of Tony Gorgot , Jack Stites and Andreu Codina 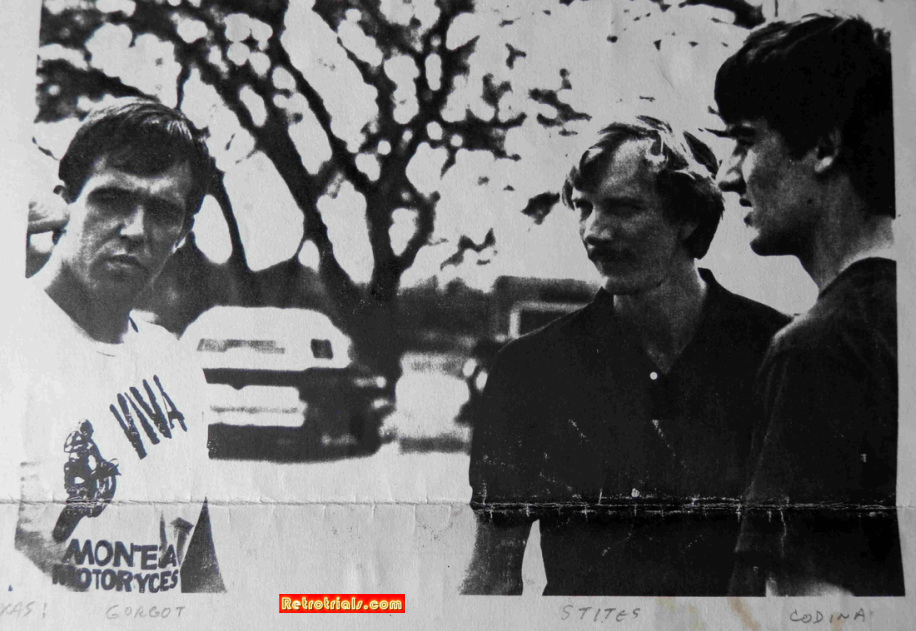 2013 Andreu Codina Interview WWW.RETROTRIALS.COM
What was your favourite era of trials?

I still think the World Championship was very nice when it started in Ireland in March or April?

Then it was real trial. You were going there, it was a bit muddy, cold and then you go to England muddy and cold, then you go to Belgium muddy and cold. Then there was a little break and then France and Spain, Italy, grippy and warm. Then at the end of the season in August at Finland. I think that this was more real World Championship.

In the foyer of the new Gasgas factory there is aluminium framed Gasgas Halley. Please can you tell me about this bike?
Yes I know. There was an advanced mechanic at Gasgas called Mange and he was very crazy. I remember that when they were working with enduro and it was the beginning of the mono shocks with enduro and I arrive at his place of work. I see there a new frame a new shock system and I see written on the swinging arm the letters USM and I call him and I ask him he mange what does this mean USM .All the suspensions systems had a name you see.  He reply and say “un sistema más” – One more system ha ha ha. This guy also one day decide to make an aluminium framed Gasgas. It was just a project of his, not Gasgas, just play. It has never been used. The company let him do this because from many ideas come one good one.

You were privileged to be chosen as a rider for the Trials des Nations on many occasions?
Yes, I am very proud of this. It was a great teamwork and better fun to work with the other riders and get success together. Great time.
The Barcelona motorcycle show. As Andreu was the sales manager he was on the stand with his wife. In the right photo is also Josep Pibernat
What do you remember of Diego?

First of all he was a good friend. We had been riding for the same team for 2 years and I know the family and the father we have a very good relationship. It was very sad what happened so but there is nothing you can do.

Did you enjoy being on the road?

Yes, it was good times. Wife started traveling with me in 1988, during the Gasgas times.
Here is a great selection of photos that fall into the "On the road" category :)
First , two photos of a visit to America
Now Japan for a trial with Josep Pibernat. The photo below right is Andreu with a very young Takahisa Fujinami