I did a show in 2008 for Honda at the motor show, another for Shell to launch petrol. I’ve ridden all over the world with the top gear world tour. I was employed non-stop to work with this arena show which would be performed in many different countries. I’d agree a deal and then I’d get my itinery through and be flown and hotelled in the best places all over the planet. On one occasion, I done a show in Australia. It was an arena like some oval gladiator fighting place arena. It was tiered and I remember being back stage and walking out onto the floor and seeing the seats filling up. I kept looking at the seats appearing and they kept continuing and going up and up and up. The people in this stadium were just unbelievable. It was so high and big, unbelievable. That gave you a buzz. That was something else.
They were looked after lovely. The performers just had a porta cabin with a couple of tables outside. Ben (The Stig) used to get changed in my Motorhome while the tour was in the UK. (Birmingham/London) I remember the top gear bosses coming up to Ben and saying “You do know, you’re not the Stig, don’t you” thought that was out of order!!!  We got treated ok though. Everything was paid for. I remember me and Clarkson getting picked up in hong kong in new Porsche Cayan's  and chauffered us to the airport. The only difference was Jez went to First Class and I was in economy although one of the stewards recognised me and I got upgraded result!! 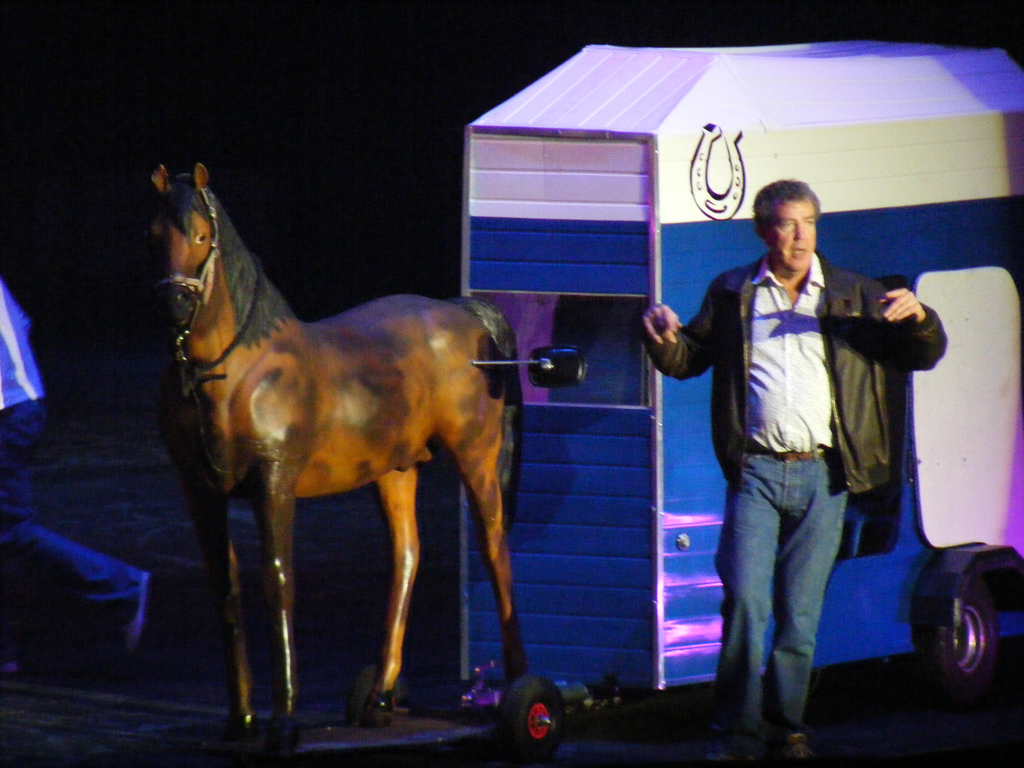 I was coming to the end of my career and I got called to do a rehearsal in my last year. I was sick to death of being on the road and in hotels. This was shows in general. I was 40 at the time, so this was 2010. This was a brilliant innings, still doing shows at 40. I’d already decided that this was going to be my last year. Top gear asked me to do a rehearsal to find out what could be done on a digger sequence for top gear live. It was up at JCB world so I went up there and I’m never late. I always make sure I’m early. They send me around to the other side and I see this trials rider on this digger. I have flu and feel poxy!! I’m about 2 hours early at this stage. As I get closer I see its Dougie. He was going over the digger when I arrived. I was the one who got trials into top gear. Simon Aldridge, the promoter was there. He was the guy who had arranged loads of shows for me, including Max power and loads more. He did all the motor shows really. I’ve got no problem with Dougie and class him as a friend. I shared my Beta Zero with him at an arena trial when Colley come off at practise and hurt himself. Dougie was the reserve rider and was asked to stand in for Colley. We were all on Beta. Dougie was needed by the trial but Colley wouldn’t lend Dougie his beta, but I shared mine with him. This was about 1992, so we are all good. Anyway back to rehearsals, Simon comes over to me and I say to him, by the way, this is the ego bit coming back again, whats Dougie doing here Si? I said Dougie is a fantastic "trials rider", and I have great respect for him, but I'm the best there is at this, he replied “Oh Roland is thinking about having 2 riders”. I replied “Simon, I’ve known you a long time, is this an audition?”. I said tell Rowley he has got his f ****** man, I’m F****** off”. That’s it, I said “I don’t do auditions" You book me or you don't. There were other blokes coming along but they didn’t bother me, but this pi***d me off big time, not Dougie, but the situation. I then got back in my van and drove off, that was it. At the time it really bothered me. Dougie is a brilliant rider, but it’s different. He won World Chamionships for Trials, I won them for freestyle/Tricks/Shows.
So can good Trials Riders do shows?

Not really, you see, a wheelie, donut and endo don't qualify you to do a show, although some top riders think their status qualifies them and don't realise how bad they look and that its not their thing!

Back in 1998 whilst I was riding with Montesa, I started 3 years in a row of winning the Motorcycle freestyle World championship. (Trials, off road and Lightweight Class), I was also teamed up with Kevin Carmichael and won best pairs too..
What sort of sponsorship deals did you have?

I’ve had loads of sponsors, to many to mention -

Mercedes sponsored me with a top of the range Vito van. After 3 years, it was mine. Before this I had a huge Mercedes Atego motorhome. They sprayed it Mercedes silver with a huge “Jason Finn “on the side. Down the back sides were all my sponsors in matt black. My bikes were all sponsored as was my clothing and boots and helmets paintwork. I got sponsored by all manners of companies.

JLF design supplied me with custom painted helmets. They do them for Lewis Hamilton as well.

CSI Models, I belonged to Lenox Lewis's Model Agency, I did modelling and once did the launch for Firetrap clothing a new range. Firetrap continued to sponsor me afterwards. Ive Modelled for Hugo Boss, Riess, Firetrap to name a few

Castrol - they paid me in products and money, product oil from Silkolene, Motul

Michelin Rubber…I would never use anything else

Alpinestars  (Never wore anything else ever)

Garibaldi SA , I was the first person in the UK to wear a one piece suit. I wore Cycling stuff in 89, and wore Garibaldi One piece from the end of 89', I also set a team Up of Garibaldi Riders, as I was the official UK importer of Garibaldi Trials Kit into the UK, having a Guy Named Tony Croucher running it for me. David Gilbert being the Number one rider at the time riding in A Class Schoolboys, I still go practising with David now !!