How did you keep fit?

I used to run 3 miles a day and go up the gym 5 days week plus ride my Bike. My fitness was paramount. A show consists of about 25 minutes 3 times a day and I had to be in tip top condition. I didn’t have an ounce of fat on me. I could practise all day no problem, one 25 minute show, wow that was hard, as the crowd drain energy from you as well as gives you it…hard to explain, you lick your lips and your tongue is dry, that's the adrenalin I suppose?

Have you ever smoked?

Never and never taken drugs. I don’t drink either, well I have not since I was 18 when I lost my Licence, oh and once in 2003

Yes, I love watching Tony Bou. I remember Sammy Miller moaning about hopping years ago and I used to think that he was wrong to moan but I can see where it’s going and I wonder to myself now, is it riding now?

Could you do the rear wheel hopping?

Do you mean hopping to either side? that came really easy. I could hop an 89 beta stripey 180 from stand still, or do you mean back hopping? where you hop on the back wheel with the front in the air….Yes, I could do as many continually as I wanted or until I was knackered. It’s not new. I was doing theme back in early 89. I used to practise with Gavin Cooper on my TR34 and he always watched me do them. I use to do them at shows in 89' too. When we went to the Beta Zero Model in 1990 I use to always snap the V-Bracket that held the rear calliper on while hopping on the back wheel, so yes I know I was the first to do this in the world, this was something we all done on BMX, so it was natural to try and do on a motorbike, after working out what you needed to do to make it be done on a motorbike.

Why don’t you continue doing the shows now?

The shows are dead. The crowds are so much smaller now. I just think the shows are like trials. It’s like trials, back in the 60’s and 70’s, the trials were chocker, but now they aren’t anything in comparison. It’s the same with shows. The money isn’t there anymore, well, the Big Bucks, you just can’t demand the money now, but you can still earn a living out of it today, but there is a lot of choice for organisers now. When I was doing them it was good as I was the only one.

Who else does the Shows?

Well, Martin Crosswaite and Dan Clark have a great Show. I would say they were the next to come after me. Steve Colley is doing them and also some others are doing them, all mates and all round great bunch of Guys.

How are they in comparison?

How can I answer that? I won championships and I was also the first, the other guys cannot take that away from me, I applaud them for doing what they do, it isn't an easy life, a lot goes along with it.
Did you ever get into the GasGas factory in Girona?

Yes, I went to the old one, but I don’t remember it all.

How did it affect you having 20 or 30,000 people clapping and cheering for you?

You get use to it, it becomes the norm, you get a lot of cling on’s and a lot of people sucking up to you. Kelly, my partner hated it. She was the only one who used to tell me straight. All these people would hang around at the shows and just try and help, but didn’t. I’ve had people getting my number ringing up and being crazy down the phone. I did a show for one guy up in Scotland in 1999. It was a carpark in the middle of nowhere over looking the sea, 30 mins before the show there must have been 50 people there, I felt for him as he organised it himself. Well, by the time of the show there were thousands of people there. At the end of the show they all came for us for posters autographs and stickers. I s**t myself. I had an awning on my sprinter and I held onto this. Kelly locked herself in the van, it was really scary, you go from this to the calm/norm the day after, looking back that must have been pretty mind messing…but I seemed to cope with it. The organiser of the event said “I want your crash helmet for my daughter”. I said I can’t as I’m using it for this season, I said I’ll sort you some other bits out when I get home”. He then phoned me up when I got home and said “You know your helmet, I’m going to come down and kill you”. He was a crazed fan. He was previously on the phone to me every few days after wanting things from me. He was obsessed. 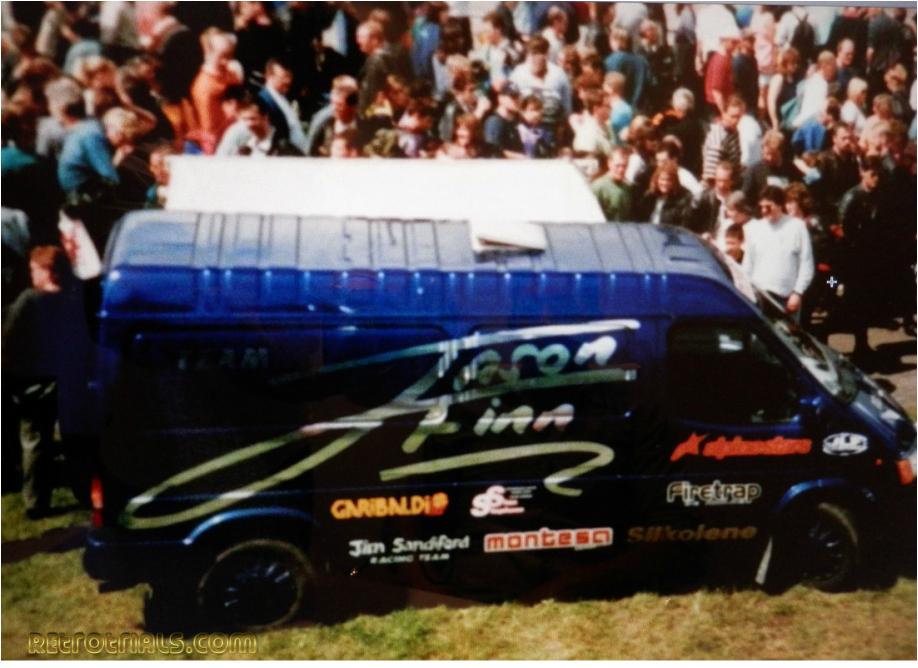 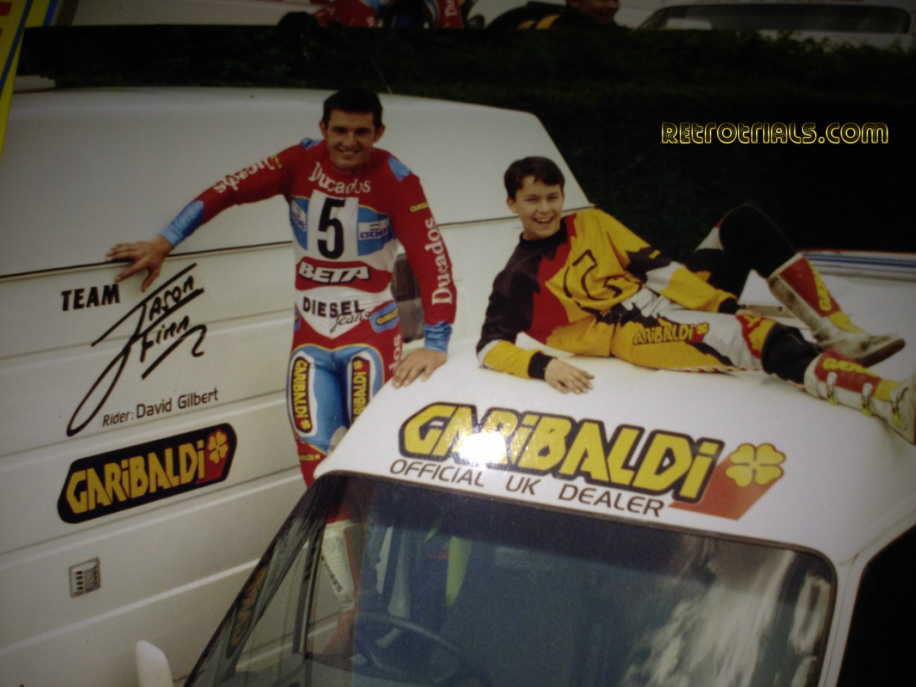 Jason Finn - Trials Freestyler - Exclusive Interview
Did your partner Kelly ever come along?

She has been to the occasional one. The first one she went to she watched and when we left and drove away, she said “I’m sick to death with hearing the name Jason Finn”, that was very funny to hear!!
Did you ever doubt your ability to do the difficult tricks at the shows? Were the conditions ever to bad?

We did do some events on grass. This faded out. In the early days there were obstacles on grass. This had to stop because grass is a nightmare to ride on and to be precise the ground may undulate, be boggy, have ruts and soft. It would ruin things. I learnt this quickly and all my shows were on tarmac. If I was riding up the side of my high top transit van, I’d drag mud up the side and there’d be no chance of getting up. In 2000 I did a heavy metal show display and they said that the whole area would be tarmac for the show. So I get up there and they have laid down these large sheets of flooring like cheese grater pattern. They were metal. They were animals and not the sort of people I would muck around with, so I did this show. If I had come off I would have ruined myself. It was dangerous, but I always made sure I perfected a trick before I used it in a show!!
What year were you able to pack up the fencing? 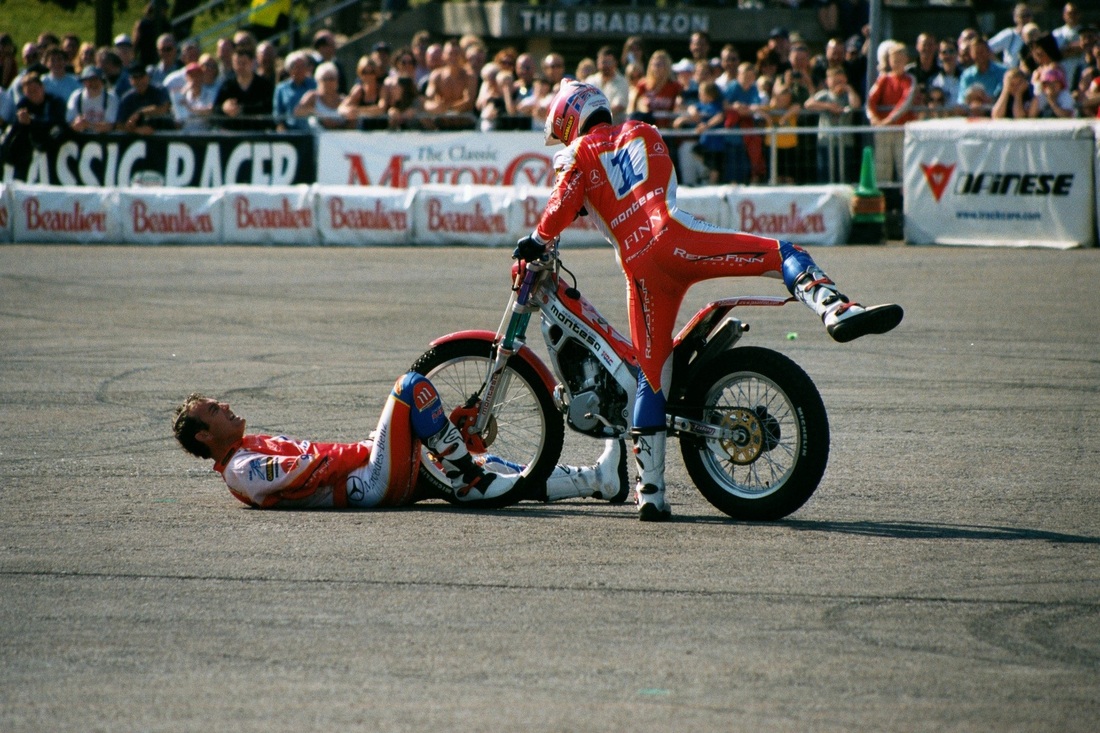 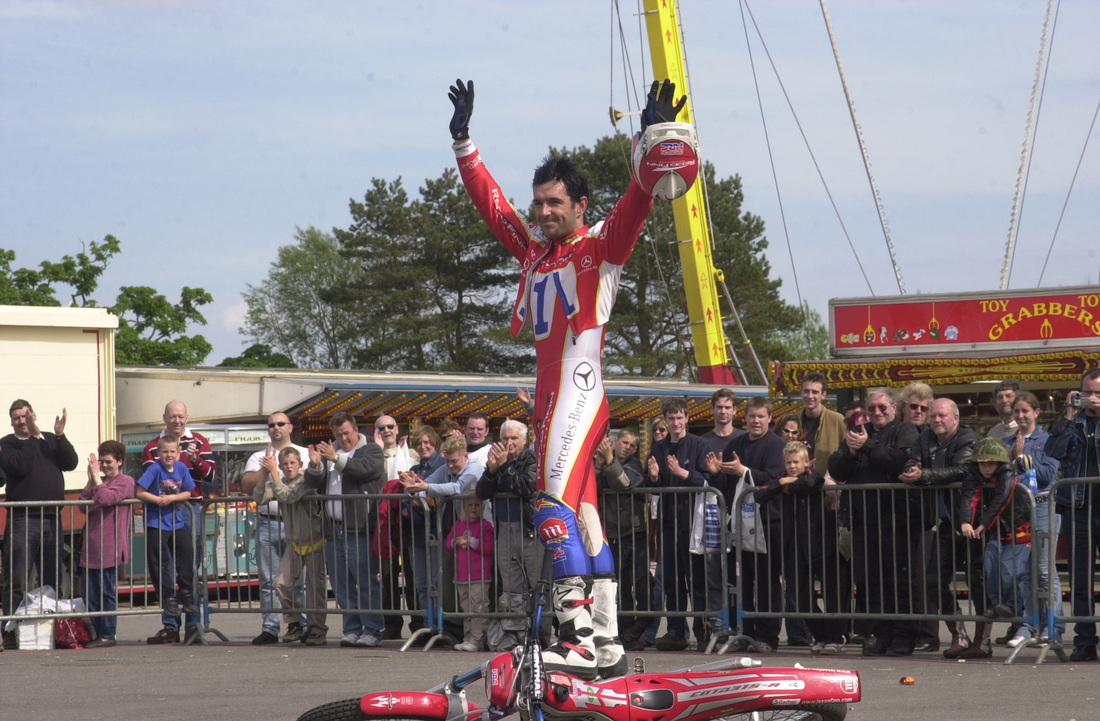