World Champion Bernie Schreiber relaxes , back at home. Yep - Bernie used to love bunny hopping.
At the end of the day they would rather see me win than someone from Montesa win. That’s how I felt as well. I'd prefer to see Vesterenen than Ulf Karllson or who ever was on Montesa.

And when you were growing up was there an idol that you had in the trials World. The guy whose poster was up on your bedroom wall?

I heard so much about Sammy Miller and he was always like you know , the man to beat. I'd never really seen Sammy Miller in his hay day. Like I said, I think everyone was as good as they are at that time. At that time Sammy was top man.
Charles Coutard ,Manuel Soler and Bernie out for a days practising.
Later I was very good. If you look at the old video’s people might think “Oh I could do that” but they don’t realise the equipment we had back then and the conditions we had to deal with. I'm sure Sammy Miller back in those real early days was really unbelievable.

Was he an idol?

I think my biggest motorcycle idol that ever remained for me was Steve McQueen, just because of the movie “On Any Sunday”.
For me as a kid he was my hero and my dream rider. This was very inspiring to me. I remember seeing Malcolm Smith at a Riding park .He was doing a wheelie and then doing some different things that was impressive. 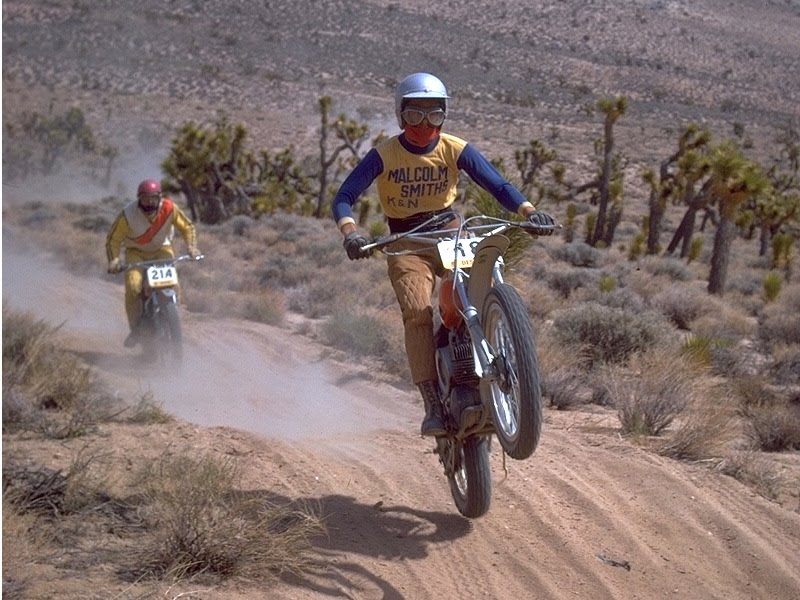 2014 Bernie Schreiber Interview photo bruce brown productions
Bernie's book cover photo location
Here in the hills above Bernie's home is the exact location of this famous photo. Other photos by Len Weed at the same location show the bridge above Bernie's head, as he rides over rocks in the stream below.
A big Thank you to mark Oldar , the USA's Cagiva importer who drove a whole 320 miles + trail riding to get these photos of the exact location of the Bernie cover photo. Thank you Mark.
Now , please just take a moment to watch one of the most iconic motorcycle movies ever made.


I  find this movies quite emotional. Im sure i'm not the only one. I can be crying like a baby at several points in the film.

Every time i watch Bernie's slow motion sequence ,it literally brings me to tears and makes the hairs on my neck tingle. Now that's strange. I need a shrink , specialising in Retro trials :)
Here are some freeze frames from "On Any Sunday II"
﻿Isnt that the coolest riding gear ever made ?. I think so :).﻿
﻿﻿This is the exact filming location of Bernie's sequence in One Any Sunday II﻿﻿
This filming for On any Sunday II was carried out high in hills above Bernie's home.

Careful searching has revealed the actual section location . The filming was carried out in the water catchment concrete valleys that were installed to divert water to the Reservoir and prevent the water reaching the town.
I cant tell you how many times i watched the On any Sunday II video to compare it exactly with this this location. It is spot on. I am already engaging with locals to get some close up 2014 section photos. 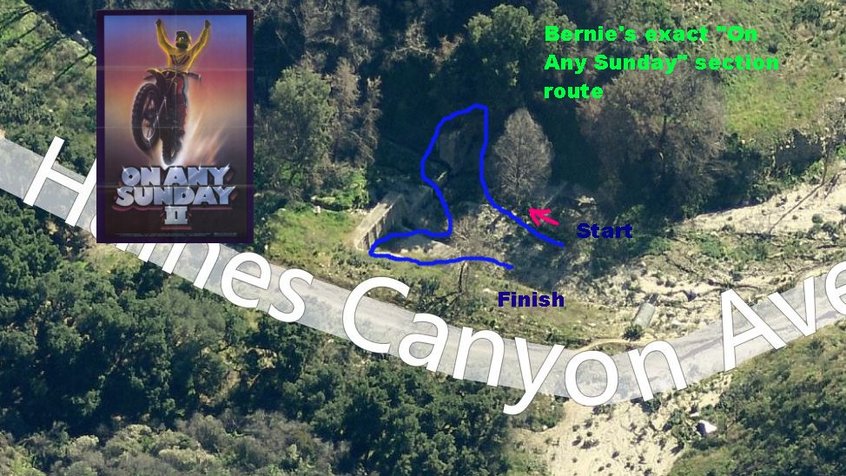 2014 Bernie Schreiber Interview photo bing
This aerial shot is a zoom out from the above aerial shot.