I finished my career on a Mont in 2009/10 after 11 years with them and have since had Gassers from Johnus!! I'm on a new Raga/factory 300 and well happy with it. I would like to thank the Shirts for all the help over the years and having faith in me.

How did people hear about you to book you for events?

They heard about me through word of mouth. I never advertised once. It was just people contacted by people. I had a web page very early on for the web.

So what happened then?

This was when the whole business started to go crazy. I was so busy. It was ridiculous. For me to do 45-50 shows a year you have to have about 150 potential bookings because no one says that they want different dates, many of them clash. 3 people might want the same date so you need all of those potential bookings. To bring the 150 down, I was raising my price to make the most of the situation. It was absolutely crazy. I would get a call from someone wanting me for a 2 day show, saying Jason will you do it for £££….well equal 6 weeks work for my father. I would say "what", are you having a laugh. I stuck with my prices and they stayed at a high level. The road bike based Freestylers were 2 a penny and were in competition with each other. As a result their prices plummeted and they were doing events for next to nothing. At this time, I didn’t have this problem. If I got a silly call suggesting the price I mentioned, my business head would kick in and I would suggest they have a look in yellow pages for Trials Freestylers and see if they can find anyone who will do it cheaper. I would also say "You pay peanuts you get Monkeys"I was very cocky at this stage. My ego got huge, not silly enough for people to dislike me, but I knew it. If someone offered me the amount I use to turned down to do a show now, I would bite their hands off, but that was then and this is now, and now I cannot do that sort of riding. It was a business and it was all about making money. Shame really, because passion makes a raw rider. I prefer raw, opposed to polished technically!! At this time I never rode outdoor trials again. I had people speaking to people and they would say "Jas, I was talking to a guy about you and he said but Finny cannot Ride Trials" just shows you how small some people think, outside the "Tiny"Trials Bubble is a very big world. Trials is some peoples world, spread your wings and think bigger and bigger things will happen. 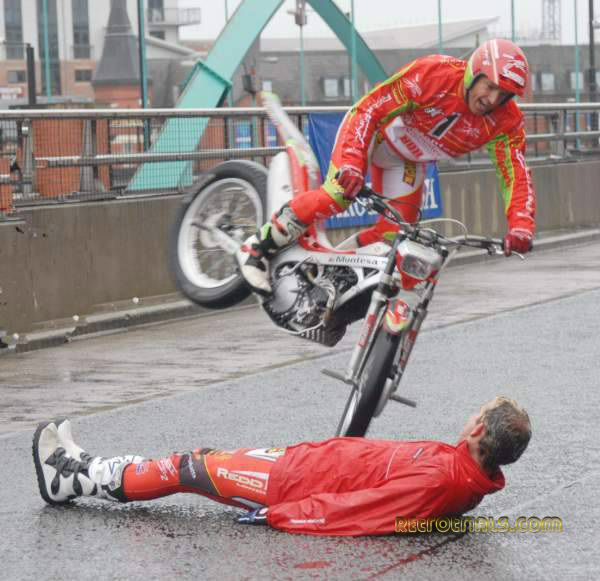 Jason Finn - Trials Freestyler - Exclusive Interview
One of your main influences has been Jordi Tarres . How did this develop?

Jordi Who? Seriously my Influence? that;s an understatement. I think its important to have an hero, someone to look up to, this gives you direction to where and who you want to be. Over the years, Jordi was my major driving force and I idolised him. I used to fast forward the trials videos just to watch Jordi. I had all the Telesport Videos, I didn’t watch other riders, just Jordi. Jordi was 7 Times World Champion. He could have been 9 times, but it was a shame in 92 and with Michaud. Jordi has many Fans and I "AM" without a doubt his biggest fan,, your maybe second James?? Seriously, I was obsessed with Jordi, Jordi knew this, I was telling Jordi  (June 2013) that all my bank details and phone pass codes are references to his World Championships and favourite years I had of him riding and have never changed them!! when things went big for me in 1995/96 I started to get fans.
I always remembered how I felt about Jordi, so when a fan came up to me and started talking about my bike, my kit and something I did on a video or something else I always tried to be accommodating and be their friend/mate, as I know how they feel as I was them once, anyone can do anything in life. I was lucky, a lot of factors made me do what I did, again I say passion, you always do good with passion and fire in your belly. As soon as doing it for money or some other reason thats when the passion dies and the fire in your belly eventually goes out. Its' a shame but a lesson in life, when I started there was this wall over Cliffe where I practised and made a lot of my Video's, the wall started from one feet high, the further you went along it got bigger and bigger, I promised myself that one day I will be going up the steepest end, and you know what I did it. I got the same enjoyment going up the one foot step when I started, to going up the 6 foot step time later. I say this because it doesn't matter what level anyone is at, its all about the enjoyment that counts. I dont have Idols or heroes now, but I do still respect my former heroes like Jordi and Steve Saunders. Everyone is human and if you are like me, your heroes would have seemed super human, thats a good thing, it will keep you striving to be the best you can. Now I'm getting older, you only appreciate what you did when its over, and not at the time….its a shame that Youth is wasted on the young
Had you been enjoying trials riding prior to your arena career?

I had rode about 20 outdoor Trials. If I had been brought up with trials I would have developed better skills to find grip. If this had happened I think perhaps I would have enjoyed it more and been very successful. I had this trials bike in my early days, but didn’t go to trials. As a result my circle of friends developed around the shows and not trials. I still kept in touch with many friends from Trials that I did in my early years, but general my friends and life was far away. For instance, Eddie Kidd and me are very close. He is god father to my daughter "Ocean". These are the leathers that he crashed in. He gave me these.
I was not preaching to the already converted”. “There is a sleeping giant out there”. I was preaching to people who might be thinking about getting a trials bike, not to someone who’s already got one. I was advertising GasGas outside the tiny world of trials as well as inside it. This was why GasGas sponsored me.

Can you remember the first big show you did?

The shows started small and got bigger and bigger without me noticing and remembering. One big show I recall was the Isle of Man TT show. On the prom, thousands of people were watching. I also did the Top Gear world tours for 5 years. I did the motor shows. I did formula one GP’s. I did British Superbikes, World Superbikes, Louis Viton,  world Touring Cars, absolutely everything, I did it. I did a few pop videos, just everything mate.

You say you did everything, what about Goodwood festival of Speed as I've seen another Rider there?

Yes, I have done Goodwood festival of Speed. I had to where a TUX and perform at the Dinner in the evening for Sterling Moss etc, all I can remember, I was on a 315 Mont, I think it might have been 1999? Talking of a TUX in 98' & 99' Who would have thought in a million years I would be riding in a black tuxedo and dickey bow for the worldwide top designer Louis Vuitton. I did this for a couple of years with the rich and famous, trying not to hit the expensive cars. This was at the Hurlingham club in London. It had an 8 feet wide piece of tarmac, and about 250 feet long, it was tight.