When you walk up the very same bank that Jordi endo'ed down and look over the top of the hill, what do you see?. 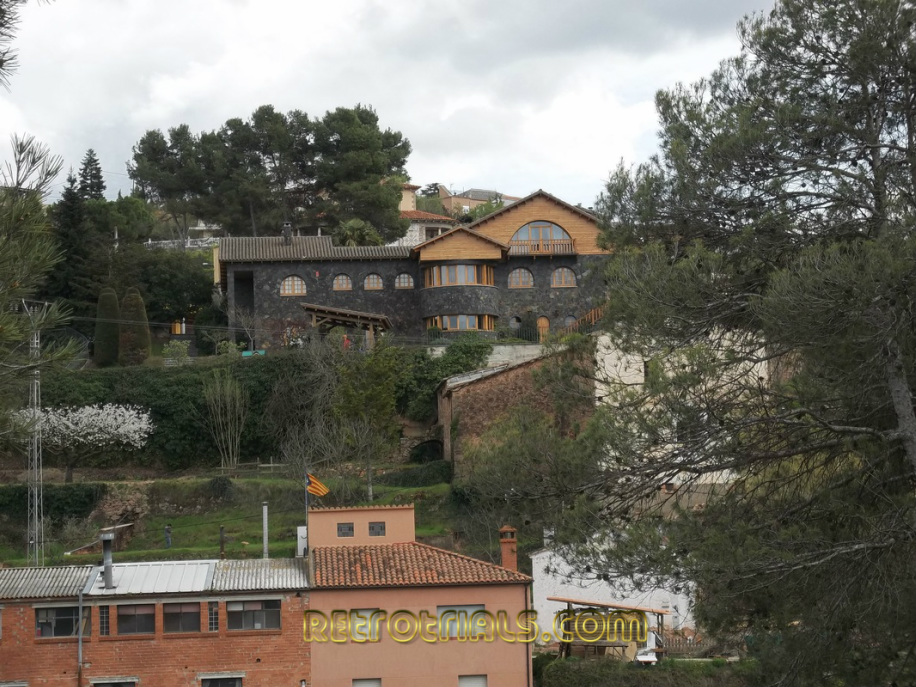 Francesc Tarres Interview WWW.RETROTRIALS.COM
........but wait, it wasn't even built back in 1987......so where did Jordi live?
You are about to visit there and find out.
Thinking about it .....we all like to practice near where we live, if we can, Jordi is no different, especially as he would be practice many hours each day.
Once I had taken photographs of these practise grounds we jumped back into the car and head up to Rellinars. The main road and street running through the centre of the village is very quiet. It doesn't get much traffic at all. I slowly crept up the hill passing Jordi's house. I then saw the house of Fransesc Tarres on my right. It is a very large house arranged on 3 floors. It has a huge garage and workshop underneath as well as a large swimming pool on the right, on the first floor outside. There is a sloping driveway to the front and an English traffic cone at the top. As you park on the driveway there are huge doors opening to the garaging, which could house 10 cars at least. At the front of the house there is a small grassed garden and a path leading to the steps. They go up to the front door. There are 2 stair cases going to this front door as you can see.

I parked on the driveway hoping that I had applied my hand brake sufficiently. If I hadn’t, Jordi would be getting an unwelcome visitor of the Opel Corsa crashing through his hedge and garage wall.  Oops...........

As soon as I set my eyes on the house I remembered it. I’d seen it before somewhere. 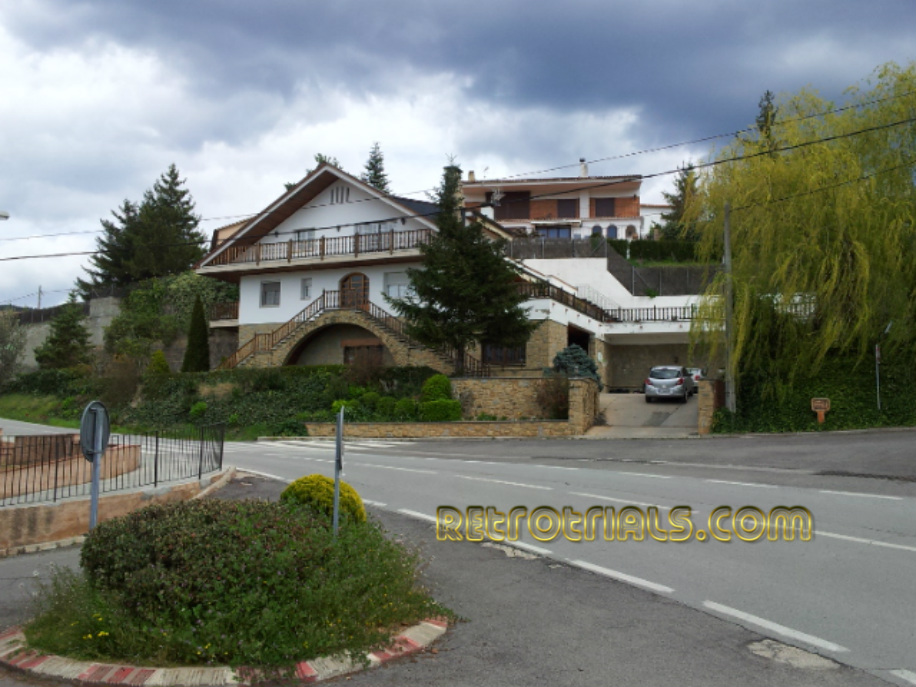 Francesc Tarres Interview WWW.RETROTRIALS.COM
It had in fact been photographed by literally the last reporter who came here. These were Japanese  journalists who flew over back in 1987 after Jordi had won his first title.


Here is the photo from a Japanese Trial magazine back in 1987, that my friend John sent to me. The picture shows Jordi standing outside of his then home. John's a big Jordi fan and a farmer from the north of England. He doesn’t miss a trick and there isn’t much he doesn’t know about his favourite trials star. 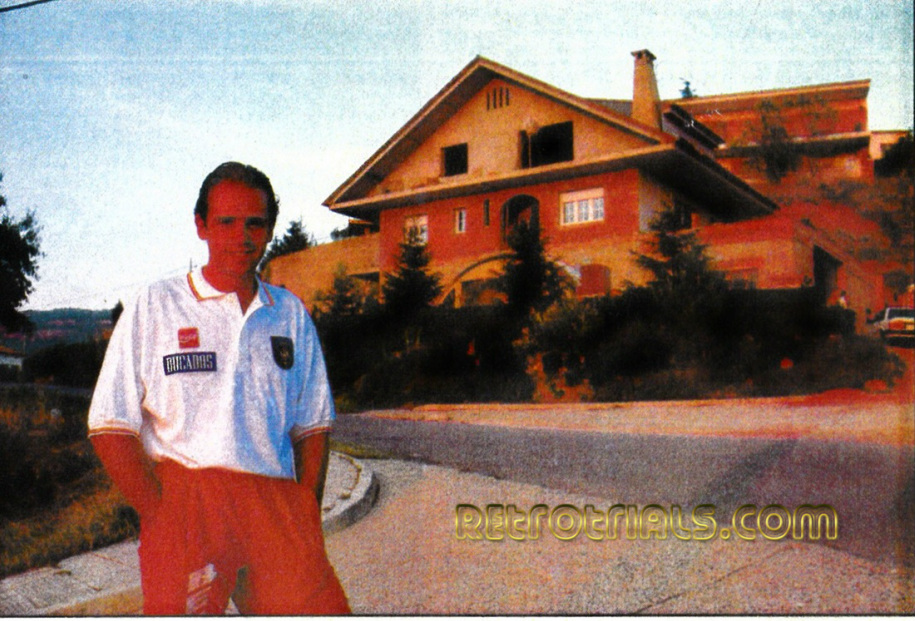 Francesc Tarres Interview WWW.RETROTRIALS.COM
Fransesc came out to meet us. He is a very charming and happy man whom I had met before briefly at a World Trial in Andorra. We spoke about Pol and the interview coming up. We stood on the opposite side of the road. This is fairly high up and behind us there are good views across the hills. As we spoke I could hear the unmistakable sound of a Jotagas being revved up to half throttle. Fransesc looked down and across the road and pointed whilst saying "That is Jordi doing more tests". I looked around and saw Jordi's house behind me and remarked how close it was to Fransesc's. The revving continued as we spoke. We had a laugh about noisy neighbours.

In this panoramic photo you can see the 3 houses of Jordi.
1 -  On the far left you can see the roof of a house. This is Jordi's current house and where he lives now.
2 -  On the far right you can see Fransesc's house where he lives with his wife Angels and Jordi's father Joan and his son, professional Trials rider Pol.
3 -  In the middle of the photo if you look carefully you can see a white house. This is where Jordi and Fransesc grew up with their father Joan and his late mother Pachita.

Francesc Tarres Interview WWW.RETROTRIALS.COM
Here is a close up of the very same family house of the Tarres'. It is the house with the green roller in the window. 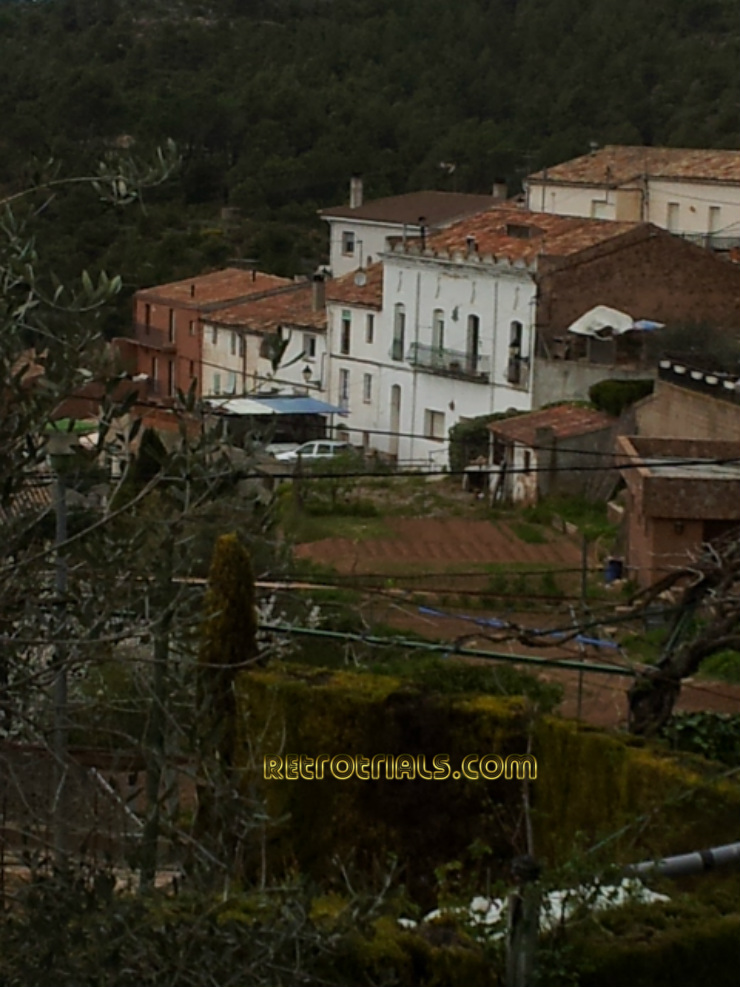 Francesc Tarres Interview WWW.RETROTRIALS.COM
After we had had a chat, we then strolled across the road and up the step driveway onto Tarres holy ground :)
Fransesc didn't ask me to alter this photo, I just thought I better had.
Fransesc Tarres, Angel his wife, Pol his son and Joan (aged 80) his father live together here. 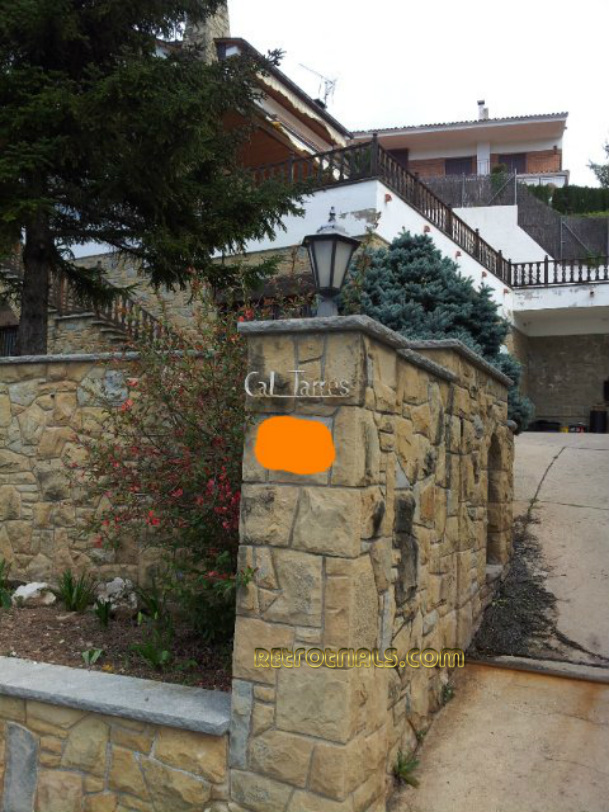