The lows of the bike?

The change to the Rotax engine. That was the end of it from my point of view.

Do you think you would have stayed with Armstrong for longer if they had kept that engine?

You can’t say, but potentially yes, although at the time I moved, Honda emerged with something that was just really special with the 4 stroke RTL, so as soon as I saw that I was like a kid in a sweet shop and really wanted that bike.

What changes did you make to the bike?  Did you for instance Chop frame or adjust the steering angle ?

It was different every week. We were changing major frame, suspension, engine exhaust air, all sorts of things. I was a total test bed. The engineers were really good and really clever and I was able to tell them exactly what I wanted and they would try and create the best.
Did you help to develop rock shocks?

Yes, pretty much yes. I worked with Pete Edmondson all the time on them. I had them on my bike.

Did you try the prototype John Lampkin monoshock ?

No, I was gone before that.

Do you have any particular memories of your time riding the Armstrong ?

Maybe not one that I’m particularly proud of, but one that it pretty bloody funny is we were in Sweden at the World round and there’s a huge rock step to finish the section off. You did all the section and there was this huge rock step. I can’t remember how big it was but for the bikes then it was massive. No one was getting up this rock step and I thought I don’t know really how to get up that but I’m just going to hit it as hard as a can and see where I go. Its either going to be up on the air or back on my arse or over and out the ends cards. I hit this step so hard it hit and it went up and I was still flat out when I landed on the top and it shot off and shot out the ends cards. There was a first aid tent in front of us. I laid the bike on the ground to miss the first aid tent but I actually slid under the tent and was there, me and the bike inside the first aid tent ha ha ha. I had to come back out the door to get my card punched to go on ha ha, that was bloody funny that was. 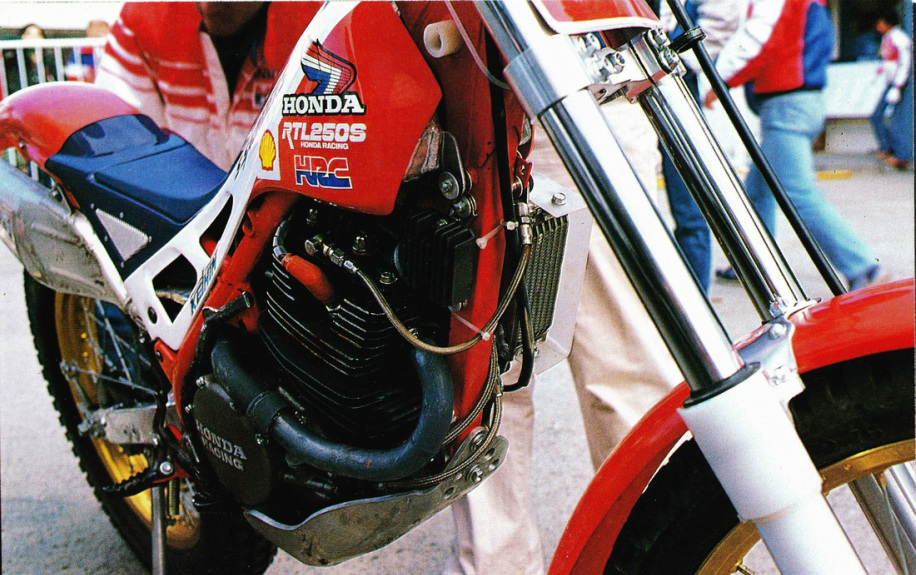 STEVE SAUNDERS INTERVIEW WWW.RETROTRIALS.COM
Was the deal you got with Honda better financially than you’d had previously?

No, the deal with Honda in 85 was less than my CCM deal, but it was the deal that I thought could progress my career as the bike was light years ahead.

At the 1st World Trials of the 1985 season in Spain you achieved 3rd which was a sudden jump up for the better and It was a surprise for everyone. Was this the bike that helped you to make this jump?

The bike and I really clicked. When you are working as one with the bike everything gets better. Your confidence gets better which means you ride a bit better, which means you get more confident again. You start to tackle different things and you get a better technique and things like that. It all started to come together.
The  German round of  1985 was you first ever  win right at the end of the season. Can you remember that day?

Yes, I can remember that as if it was yesterday.

You have got an excellent memory, you really have.

My memory for yesterday in horrendous but my memory for back in the day is great. I can remember it as plain as day. I made a little comment to you in the garage. I said you ought to ask John Lampkin about that bell didn’t I, you should phone John Lampkin up and say “the bell, what’s this bells at Saunders house, remember Germany as well !!

What happened on this day?

It was Black Forest area and quite similar to home, but with some quarry stuff.  I think you know it as the end of the year and things were starting to come together. HRC had started to get involved with the bike and so the bike started to improve. 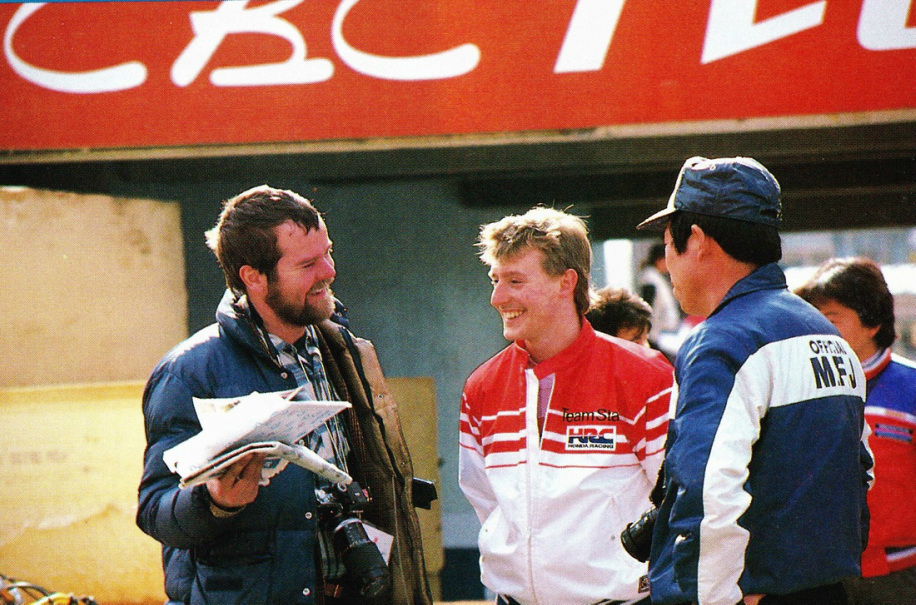 STEVE SAUNDERS INTERVIEW WWW.RETROTRIALS.COM
How were they improving it?

They were losing weight off the bike. Every time we went out there were different parts of magnesium or titanium. We had magnesium carbs on the bike, forks. Every little ounce on the bike they were trying to save. Crank cases were cut off so we had about an extra half to ¾ of an inch of ground clearance as well. The crank cases were cut off at the bottom. They had a standard wet sump but my bike ran a dry sump, so they were just using the column that was just in the engine. Again, nothing special today, all the 4 strokes run with just a little bit of oil in the engine but back then it was very special. It was nothing like a standard bike. It was still a standard cc. It was still a 250 cc but not a standard engine by any means.

Who would work on this bike for you?

Primarily myself, but when I was lucky there was a Japanese mechanic. 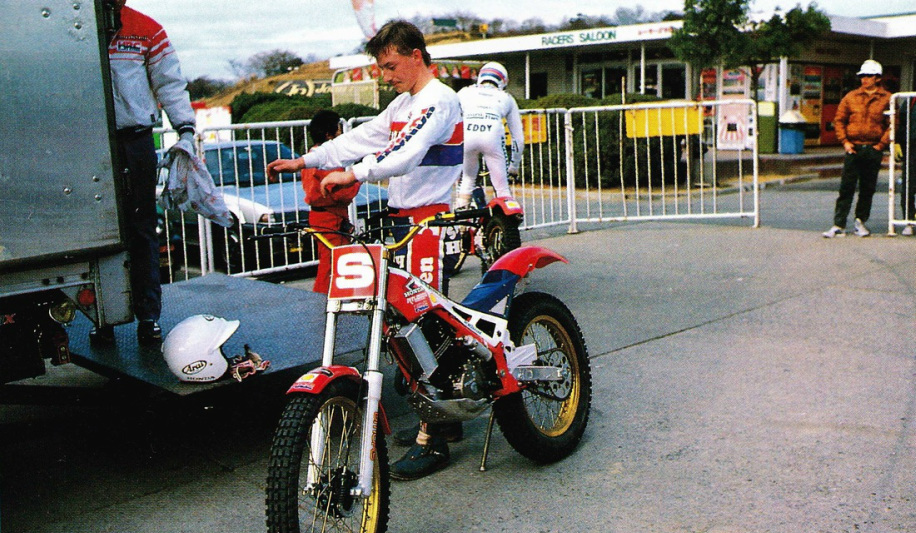 STEVE SAUNDERS INTERVIEW WWW.RETROTRIALS.COM
Where would he work on the bike?

Only at World Rounds themselves.

So he wouldn’t have much time to do anything?

No, no he wouldn’t do anything particularly special.

Did you start 1985 off with a standard bike and when the new engine came did you have to fit it?

That’s a bloody good question. I don’t know. It could have been a whole bike. I think it was a whole bike that we got. I had started off the year 1985 riding a tlr 250 because I was waiting and waiting and waiting for the mono to arrive and it didn’t arrive. Because it had come from a 2 stroke I wanted to learn the character of a 4 stroke. It wasn’t going to be the bike I was going to ride but at least it was going to be a 4 stroke of the same manufacturer. It was also along the same lines so that was a really good starting point.

So who supplied your bike at the start of 1985 and then later that year? 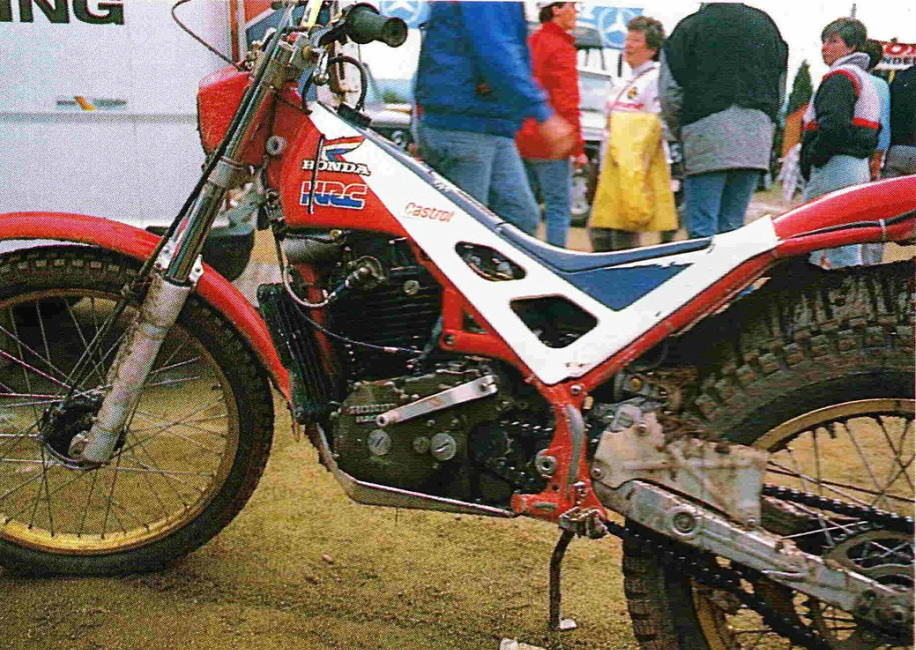 STEVE SAUNDERS INTERVIEW WWW.RETROTRIALS.COM
When and how did the dry sump engine, special bike get supplied?

It came again through Honda Britain, with the silkolene backing.

How far was it in 1985 when HRC started to get involved?

Pretty early. They didn’t supply anything but suddenly the HRC guys weren’t just with Eddy. The HRC guys would walk around to me and ask “everything OK, you alright” and it would go from a little comment like “do you need anything “ to a little bit more input. They would listen to my bike. They were excellent mechanics and would listen to my bike and they could hear whether it was performing right. They would hear it and they would say “Let’s have the bike “ they would do something and I’d get it back and “hey, oh yeah, that’s a lot better”. It just developed in that year really.