​Have you ever discovered any photographs of a bike that you have suspected of being the sister bike ?
​
No, not really. You would really need some close up photos to be able to make that sort of conclusion. You would need photographs like Cecils where they have the bike in a well lit place to make the decision that it is definitely it.
You have already seen that Jon put together an evidence package that was sufficient to convince the DVLA that his motorcycle was 669NHO. This work recovered the V5 from another person and returned it the correct bike. Prior to my visit I was open minded that this might be the real deal, however I was not prepared to get carried away. Im always suspicious and aware that owners want their bikes to be special. They look for any comparison and similarity and then make the information fit the bike, ignoring the discrepancies.

So, when I arrived at Jon's house he presented my with the black and white photographs taken by Cecil Bailey. He also had them loaded onto his laptop so that we could zoom closely in and check similarities in the weld runs.

I checked every weld run that was visible in the photos, with the bike in front of me. I was on my hands and knees studying welds in a way that I never though possible. There are approximately 8 welds that can be compared. I have studied them all. They range in size from 1 inch to 4 inches long.
For your information I have been welding regularly for 30 years with Arc, MIG and recently TIG. I'm not telling you this claiming I'm a good welder, I'm simply advising you that I know one weld from another. They are almost like a fingerprint, especially hand welding from the 60's. No two welds are the same , its as simple as that .
There is no doubt. This is the famous 669NHO. The bike that changed the sport forever.
For me personally, this bike is really special. One of the most memorable moments I have had with Retrotrials.com was visiting San Antonio with Ignacio Bulto. The place had such an amazing history of wealth, power and influence. That was where it all happened. It was as big as it gets. So finding the genuine first Sherpa T was the piece of Jigsaw that completed the great puzzle. This is one hell of a special bike.

The individual victories are less important to me than the fact that this exact bike changed the whole sport. Its just awe inspiring. What might we be riding if Sammy hadn't pushed the envelope so much ?. Progress would have happened , but would it have been so fast ?.

Maybe things would have worked out the same, however someone and somethings in life instigates change . This exact bike was the bike that instigated change.
I did not want to .....or come prepared to ride. It was pouring down ....but I was already wet ....so sod it ...get on and ride...feel the bike and enjoy it...so that's what I did.

669  felt quite light. The bars were nice, wide and high giving a relatively modern feel. It felt a small little bike and very maneuverable. It kicked over easily and the engine purred beautifully and softly. When I applied throttle it came in very softly and was carburated perfectly. It had a throaty induction which reminded me a little like the TYZ.  It revved very easily and freely. The controls were all light, however Jon had put the rear brake and gear lever on the wrong side ;). Standing over the bike, you could toss it from one leg to another very easily. It really felt good.

Engaging first gear I pulled away and immediately felt at home with it. It gripped well, turned well and revved beautifully pulling me up the steep hill behind in 2nd. Slow speed steering was superb and the clutch couldn't have been better. The brakes were ok, especially the front but that's normal for drums as we all know. 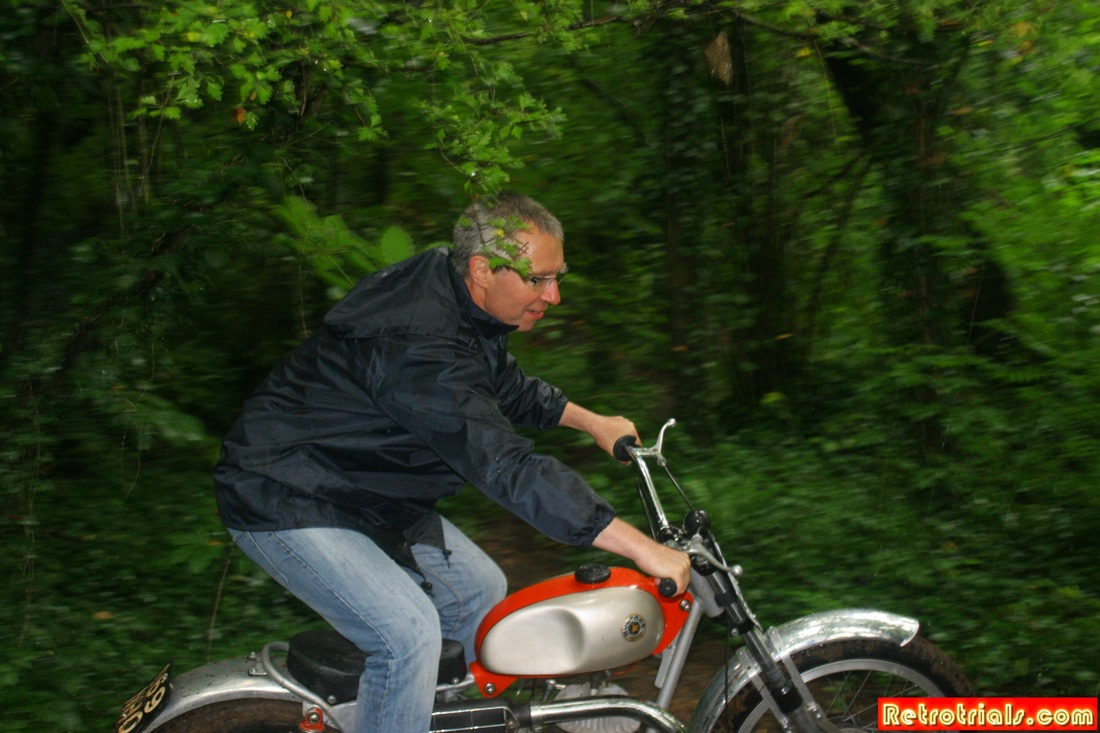 The actual first Sammy Miller Bultaco that changed the sport forever www.retrotrials.com
Helmet ? . Why ? I was back in 1964 for Christ sake. 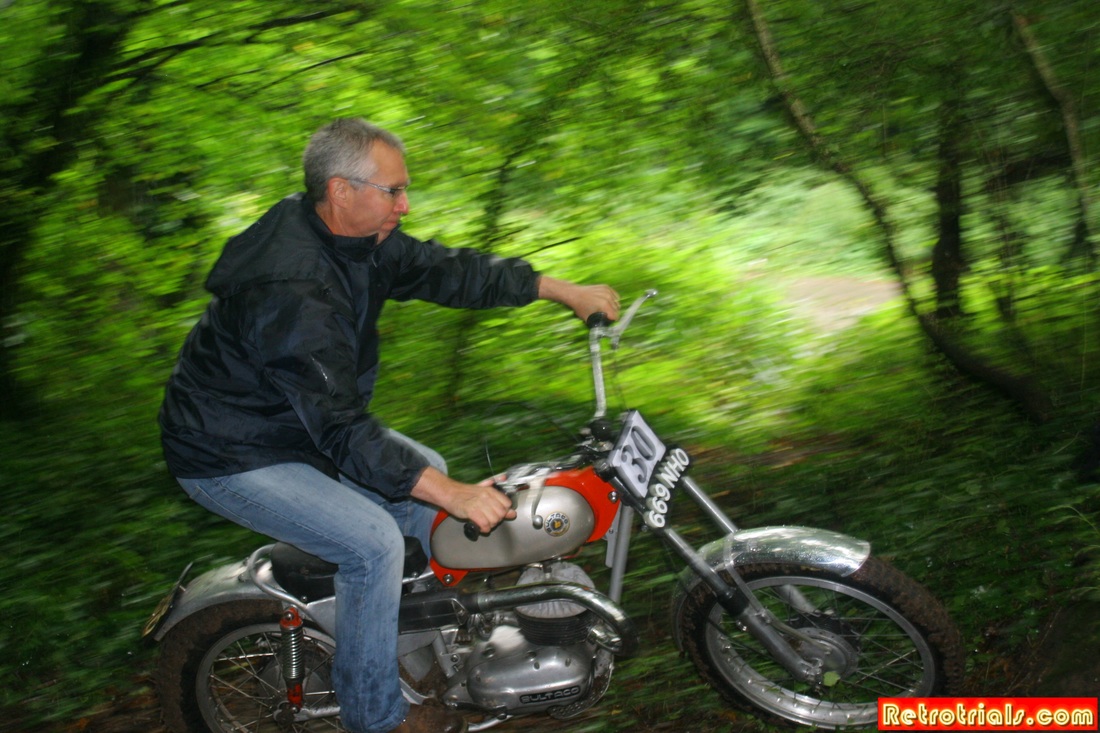 The actual first Sammy Miller Bultaco that changed the sport forever www.retrotrials.com
Do I really pull faces like this when I ride ............. 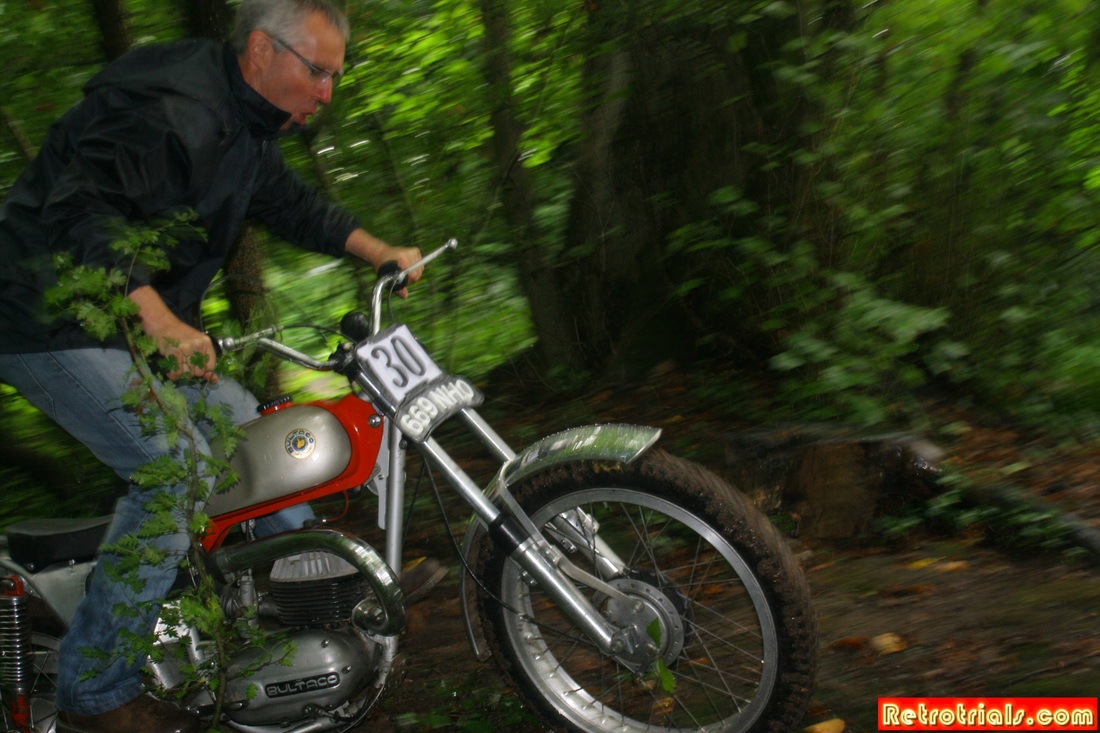 The actual first Sammy Miller Bultaco that changed the sport forever www.retrotrials.com
The muddy hill behind was great fun, giving me the opportunity to really belt it in 2nd gear. The engine didn't complain at all. 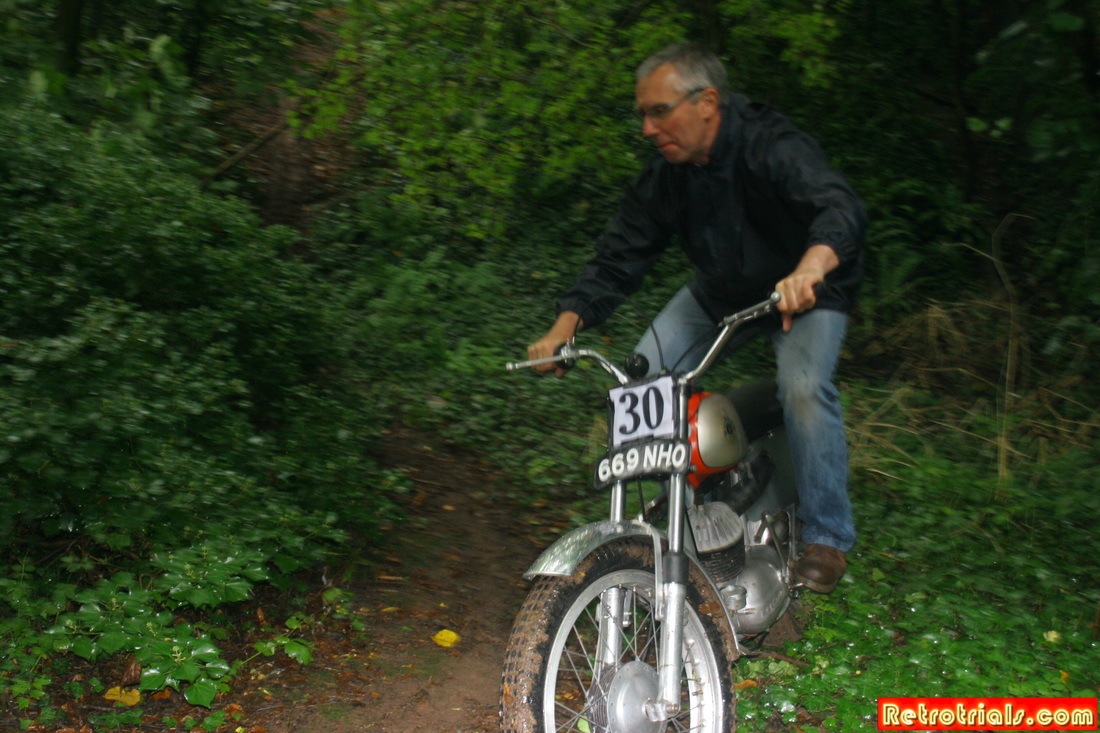 The actual first Sammy Miller Bultaco that changed the sport forever www.retrotrials.com
I'd say this Bultaco was perfect for nadgery trials and I think you'd have to be the small weight of Sammy Miller to get up the big hills. Although the power is there .... its 50% of my 300 Jotagas , but that's no surprise is it.. The benefit to this, is that when my JTG is spinning up and shooting roosters out the back, 669 will just float past. 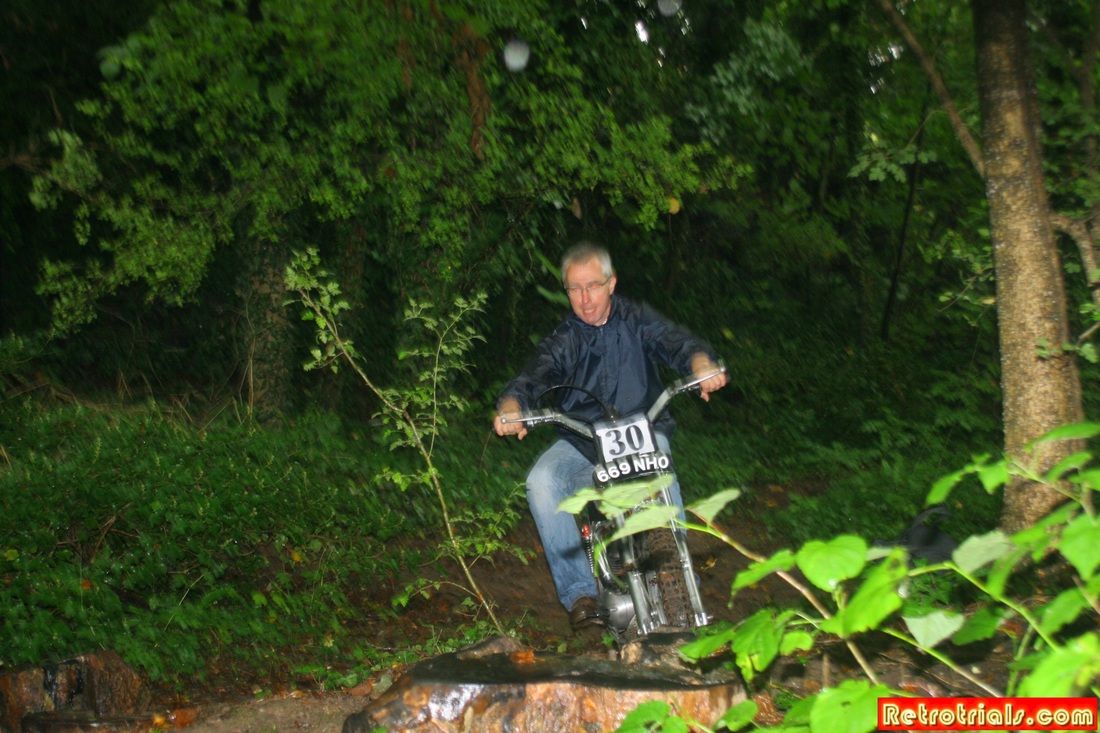 The actual first Sammy Miller Bultaco that changed the sport forever www.retrotrials.com
I was very impressed with 669. This is the first really old Bultaco I have ever ridden, so I had nothing to compare it with. However I was expecting something archaic ...and it just isn't that. Its a great bike in all areas and better still .....it qualifies for the pre 65 class. Well ...you could argue the case anyway. 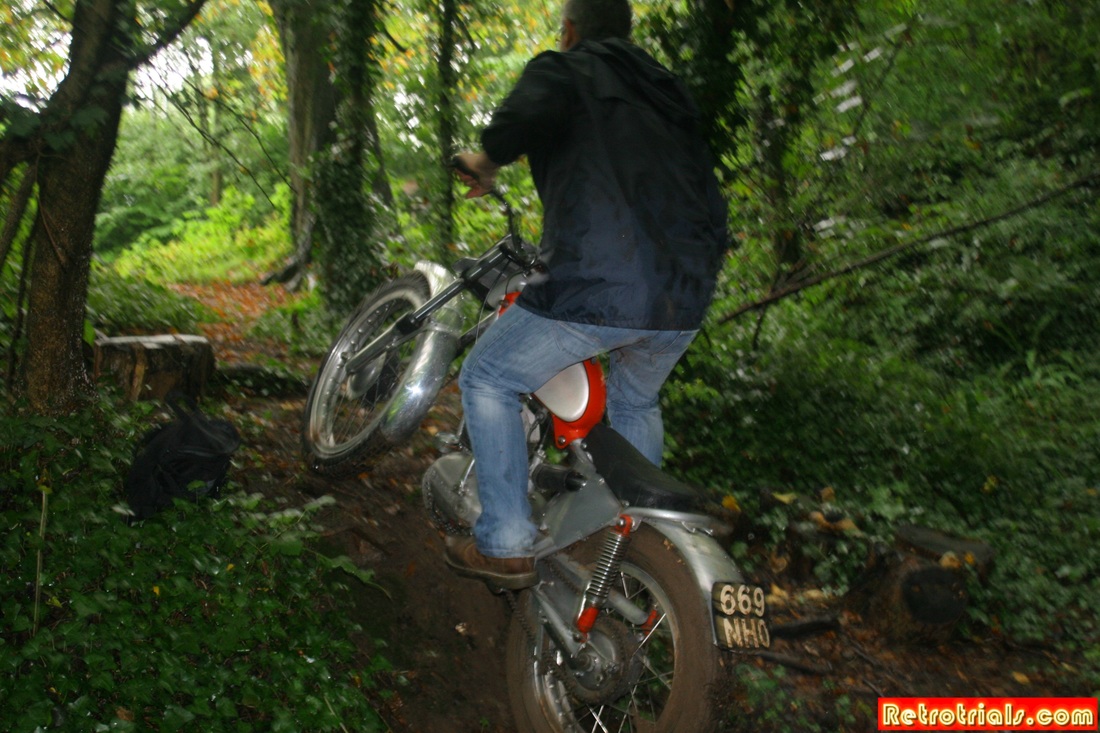 The actual first Sammy Miller Bultaco that changed the sport forever www.retrotrials.com
It was bound to happen. 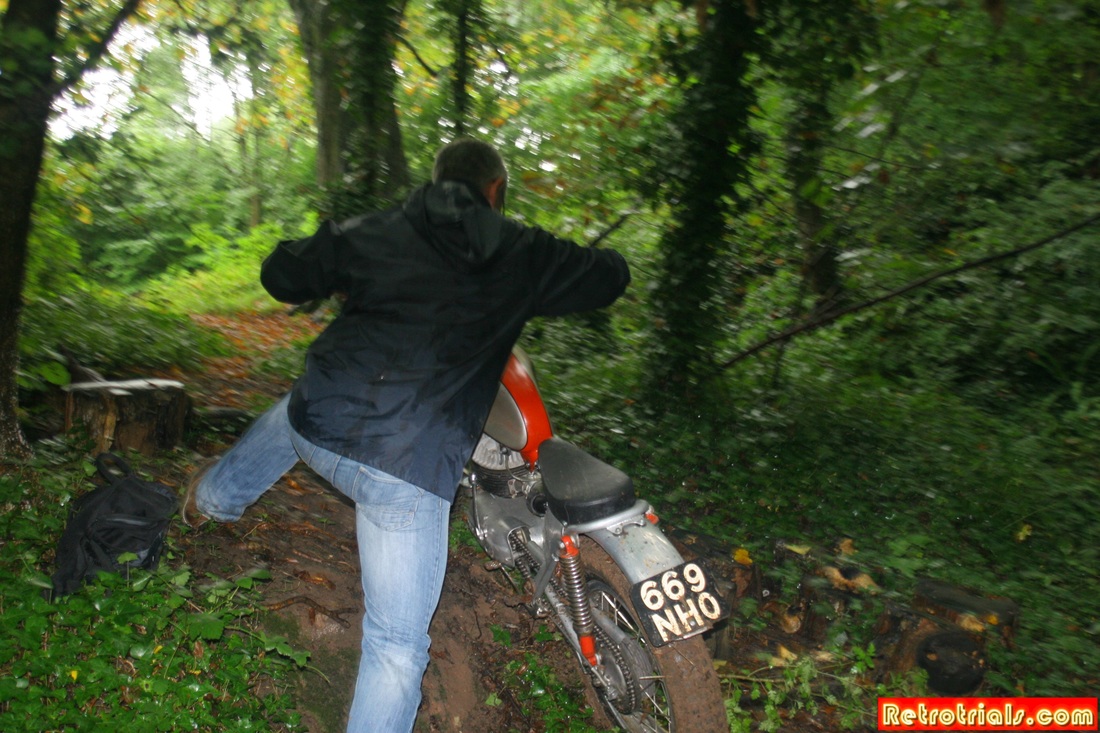 The actual first Sammy Miller Bultaco that changed the sport forever www.retrotrials.com
Thanks for the opportunity Jon. It was great to meet  you , Laia and 669NHO ....the real deal . 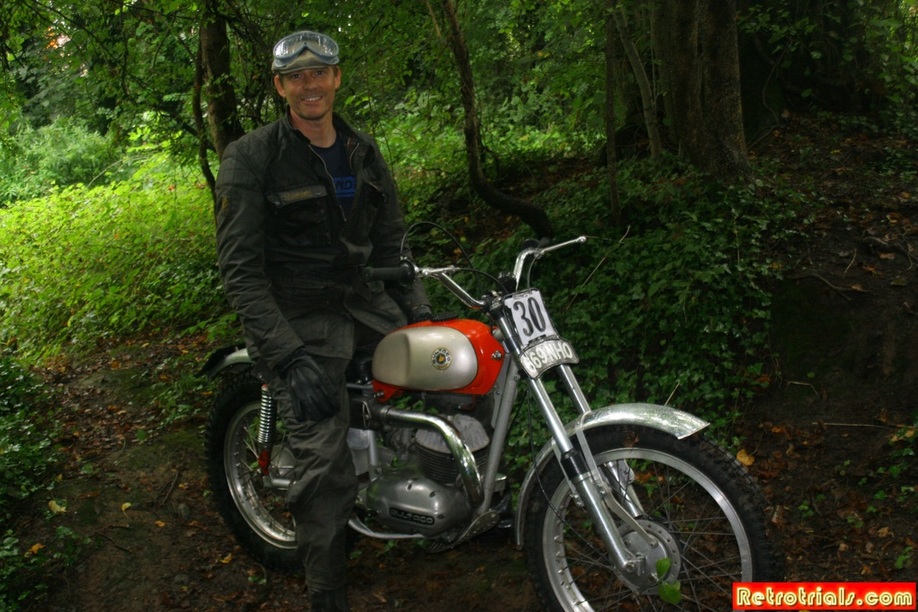