Did you make this decision from Spain or did you go the Fantic and Italjet factories to decide this ?

My first time in Fantic was not easy. It was a big challenge for me because before me and Fantic it was some English rider and all the technical people in Fantic don’t like to know nothing about riders because they think riders are funny because today they like 500cc, tomorrow 50 and today like 2 shock absorbers, tomorrow 1. They don’t know what they like. When I arrive in Fantic there was a big difference between technical and riders. ” we prefer to do what we have to do” and the riders are another question. We don’t like to know nothing about riders ha ha ha. I test the bike here in Spain and like very much the engine but suspension horrible and when I go to talk with Fantic many technical people and the boss Dr Agrati were in a big room on the first floor with a big table. Maybe 15 persons.
Everybody looks to me and I feel very small and they say to me what you prefer, what you like, why do you like to ride Fantic not Montesa? Everybody was on top of me. Then they say “one thing we say “If you came to Fantic the engine is this one and we are not going to change the engine, so if you like to ride this Fantic you have to ride with this engine. Ok? But suspensions, frame and all those things you can do what you like, but it will be this engine.” It was fantastic and I started to work. I started to work on the suspension and a lot of work on the frame.

What do you remember about the Fantic there in Bazarro?

Well for me it was a reminder of the bible, the religious book. For me this person is a very very good person, very good technical and we make a very nice thing with this person. He was, maybe 60, 64 years old and very very clever.

What was his name ?

Which department did he work in?

The engines department. When I arrived with Fantic I saw a very nice organization and everybody has his job and there was a person who works in frames, a person who worked in engine so everybody had his responsibility. In Montesa everybody does everything. Ha ha ha . There was no so much organization in Montesa as Fantic you know. This person was incredible because we start to talk , when we work with the 240 I say to this man I think this silencer has no traction and he say “no.... no possible” This silencer is closer than the other. This you have more power. More power was less traction. I say “no no no “. I say “with the same traction you can have more power or less traction”. He say “no no no traction is power. More power is less traction .Less traction, more power ”. I say “no no no. With the same power you can find more traction”. Yes, no ...yes no ha ha. I say we do one test. Bring an enduro silencer which is very open and trials silencer which is very closed and we were 20 meters from the factory and it was very cold. It was wintertime and everything was muddy near to the river. 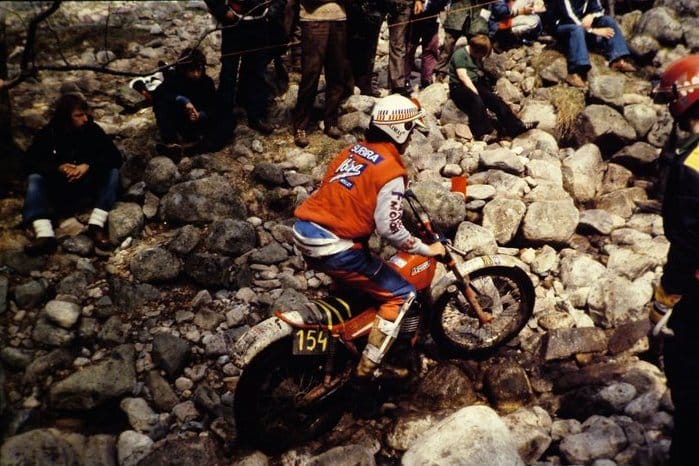 2015 Exclusive Jaime Subira career Interview www.retrotrials.com
We go to the river with the bike fitted with the trials silencer. I say open the throttle. I do nothing I just support the bike. He opens the throttle and the bike revs high and bike spins. We then fit the other enduro silencer and he open the throttle and the bike grip and pull away vroooom. Ha ha ha . He shouts “It’s impossible. It’s impossible what I find today. I learn so much for many many years ago “. We made a very nice team together and he knows that what I say I am sure that I am correct. He was more enduro than trials and at this moment we make very nice team with him because we both understand and trust each other. I think the Fantic 240 was fantastic and is the bike I work with this man. After he stops work because he is too old and after when we start work with the 300 Fantic it is not the same because it is not the same moment in Fantic and I try and I feel that something is not the same because with the 240 it was very nice all of the work that we do.
Then we walked around Jaime's bikes and as we went, he told me about them.

Jaume still owns a number of the actual original Fantic prototypes that he developed. He kindly let me take these photos. As you will know, is the 156 model.

We used the 156 silencer when we started to develop the 240 and this is where we learn down on the river bank
This one is 200. The last 200 I ride and it was with this suspension that I change. I change the position. This is what I say earlier when I work with suspensions. This position is the one we get after with the 200. This is the last 200 I ride .

Was the Fantic 200 we saw earlier the bike from the Valmalenco Trial ? 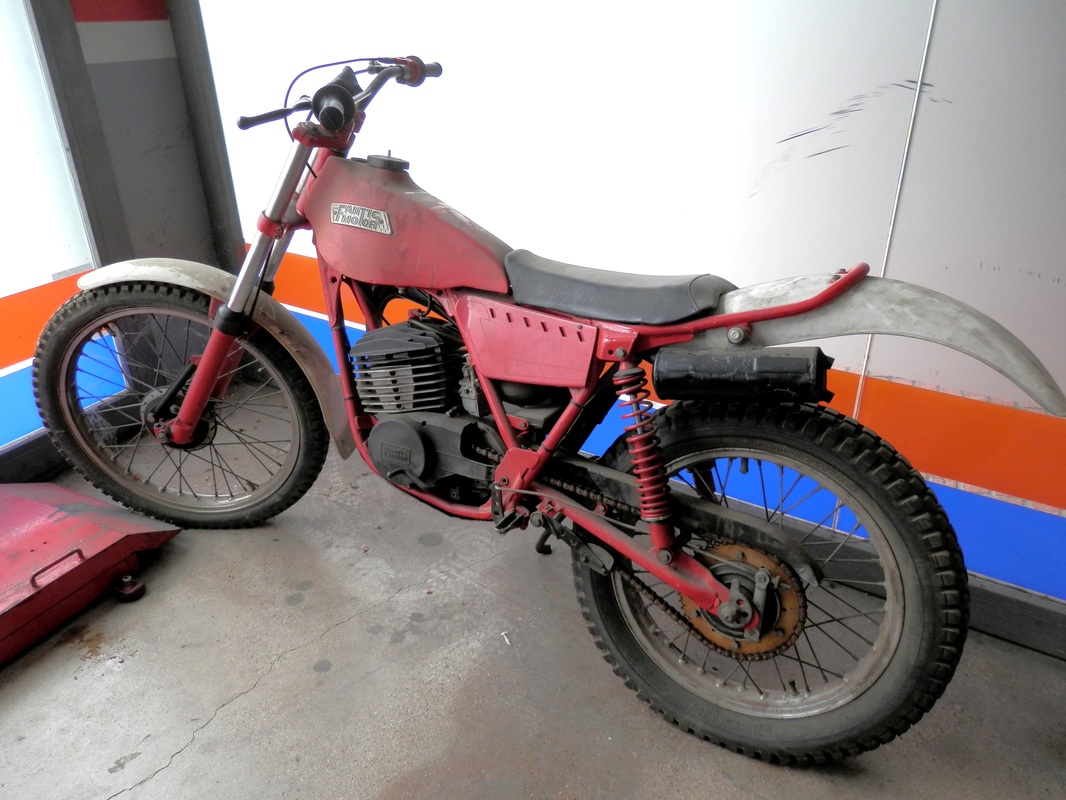 2015 Exclusive Jaime Subira career Interview www.retrotrials.com
When you started with Fantic it was the small 156cc engine? 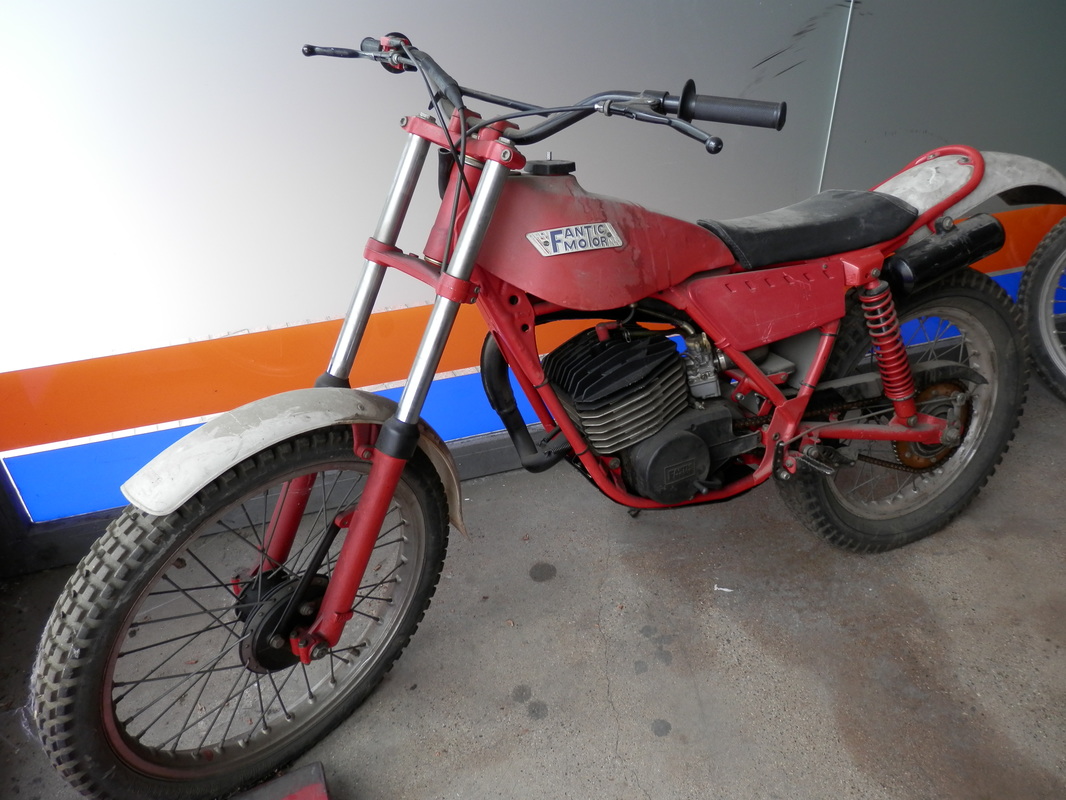 2015 Exclusive Jaime Subira career Interview www.retrotrials.com
How did you cope with that? You have been used to big engines with Montesa. It’s a big change?

Phew. I remember one journalist make interview with me and he you know the people smile because you are will a 150cc bike. I say I smile for this because I go with the smaller engine and that other people still go with the bigger 350 engine . For me the best cc is between 250 and 280cc and now many many years ago it was rare. 350cc is too much cc now because it too heavy and difficult to ride and with a good engine you don’t need more cc.

This was the start of the small engine revolution?

Yes
What are you memories of the Fantic boss Mario Agrati?

Always with Mario I have very very good times with him and even when I stop the trials I am importer in Spain. He is like a family to me and some people don’t work  as good and don’t talk as good but my relations for me is not 5, it is 10 because he help a lot me and I help a lot him.
If you want to know even more about this industrialist - read more about Fantic in the Tommi Ahvaha interview and the Interview with the man himself Dr Mario Agrati